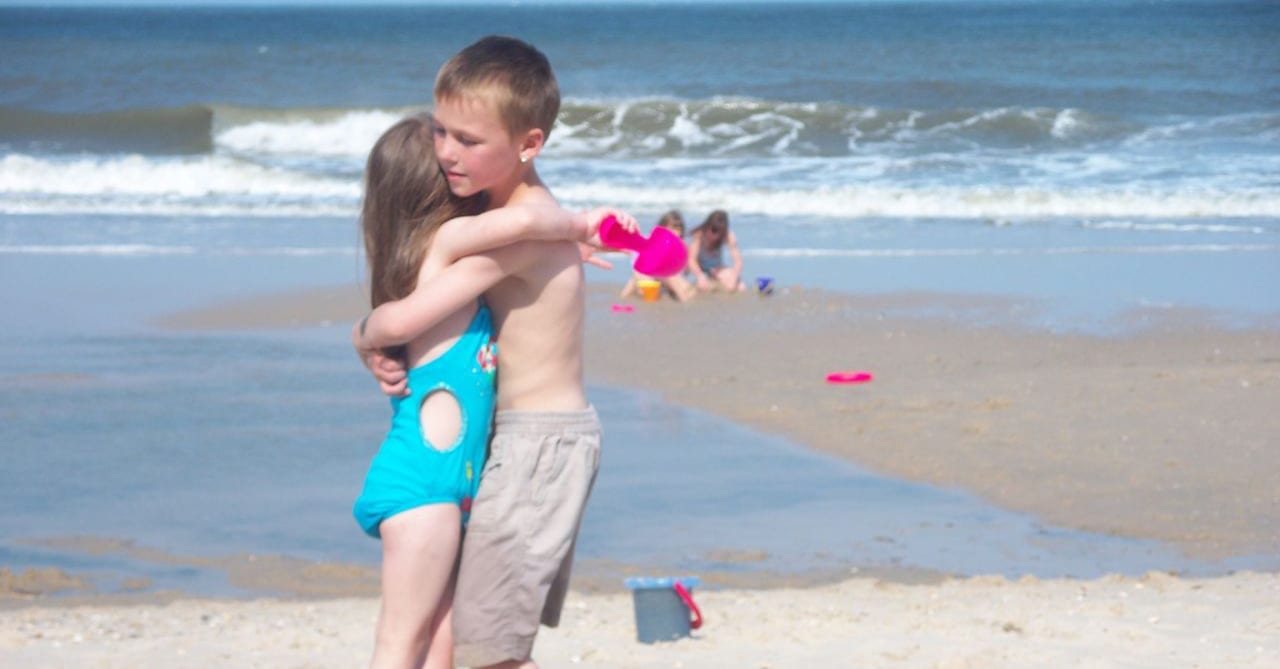 As the Gravell family enjoyed a day out at their local beach, they stumbled across a metal sphere that they believed to be a buoy. And the family was fascinated with the item that had washed up – mainly because of the hundreds of barnacles that had latched themselves to its side.

As the children posed happily beside the oddity for their mom, they had no idea that they were in grave danger. But when the barnacles began to detach themselves, they revealed a message. 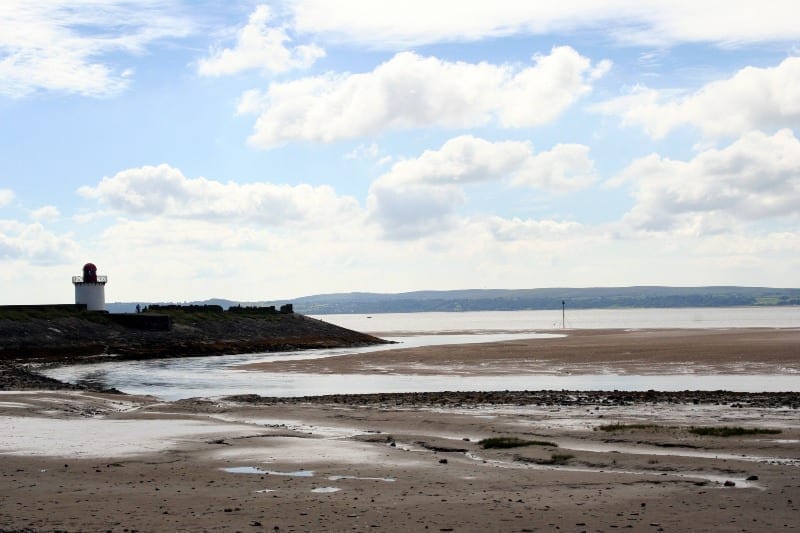 The Gravells included mom Kelly, dad Gareth and kids Erin and Ellis and they came from the coastal town of Burry Port in Carmarthenshire, Wales.

So when Kelly and Gareth aren’t busy working, they love to go on trips out to the beach with their children – much like many parents who live by the coast. But today would prove to be unlike any other beach excursion… 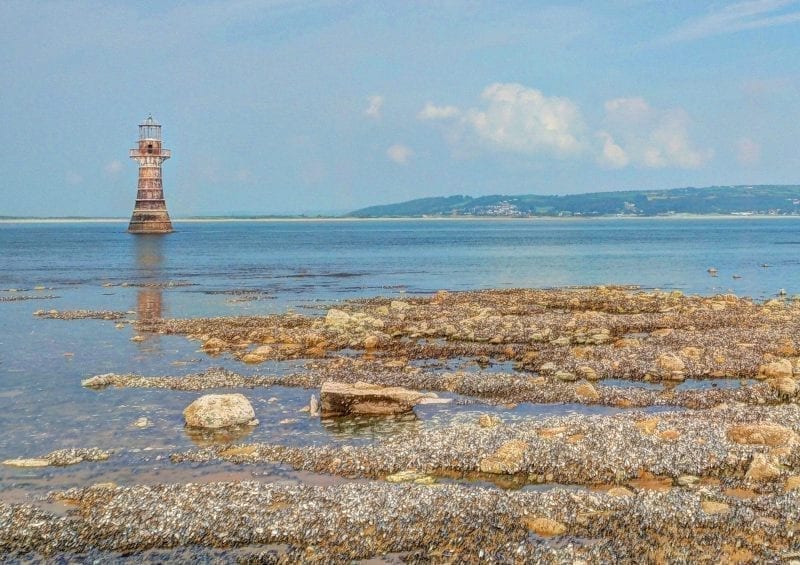 Burry Port has its very own beach that overlooks the Gower Peninsula. As the town’s name leads to believe, the location was formerly home to a busy shipping port that transported Welsh coal from the local valleys. Today, by contrast, it’s less industrial and is mainly known as a local beauty spot.

Little did the Gravells know, there was something lurking on the beach that had the potential to turn deadly. 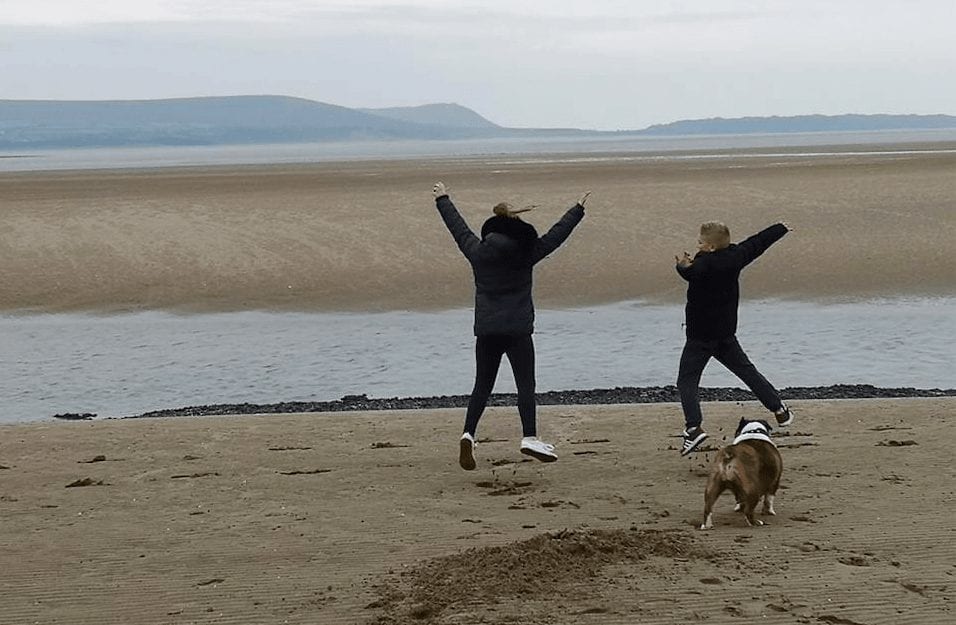 Gareth shared the innocent family day picture that his wife had posted to Facebook. In the photo, Erin and Ellis both flash double thumbs-ups. All three of the kids are posing in their swimwear against a backdrop of blue sky, sparkling water, and golden sand. And in the accompanying caption, Gareth wrote, “No place like home! Kids love Burry Port on a nice day!”

But it was the next set of photographs that got the authorities’ attention.

A Day Of Fun 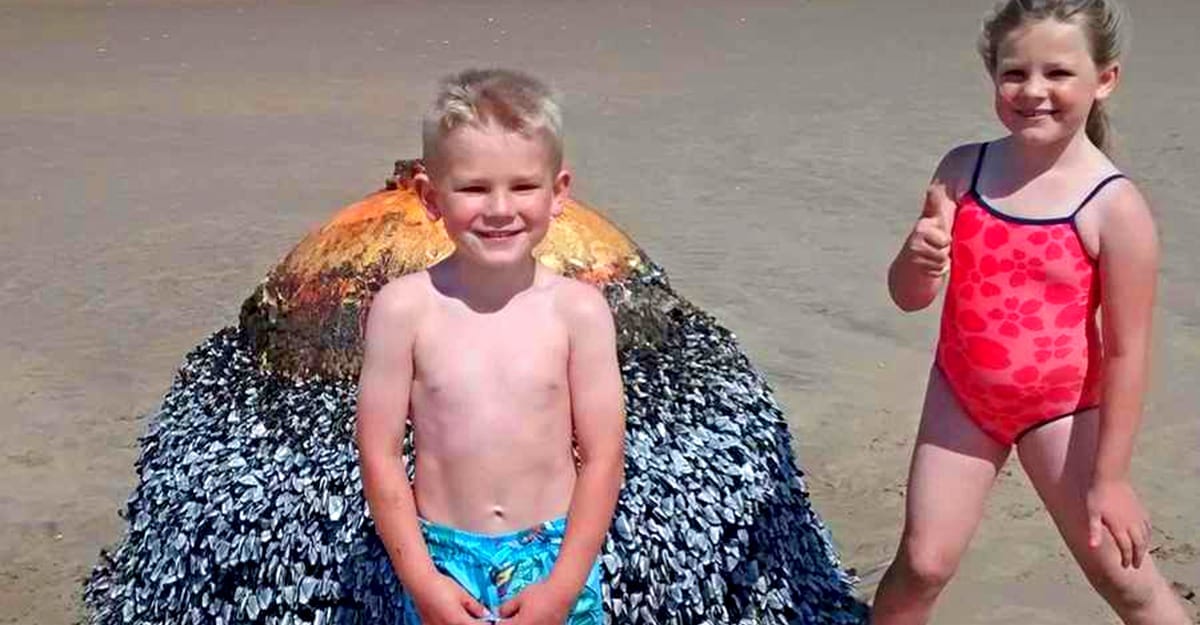 At the time that the photograph was taken, Erin was just six years old, while her younger brother, Ellis, was four.

And it appears that the kids had found something odd on the beach that day. In 2015, Kelly explained the find to ABC News: “My children took their boogie boards down, and we were going out to the sea. We saw a large object on the beach, so we thought we’d have a little look.” 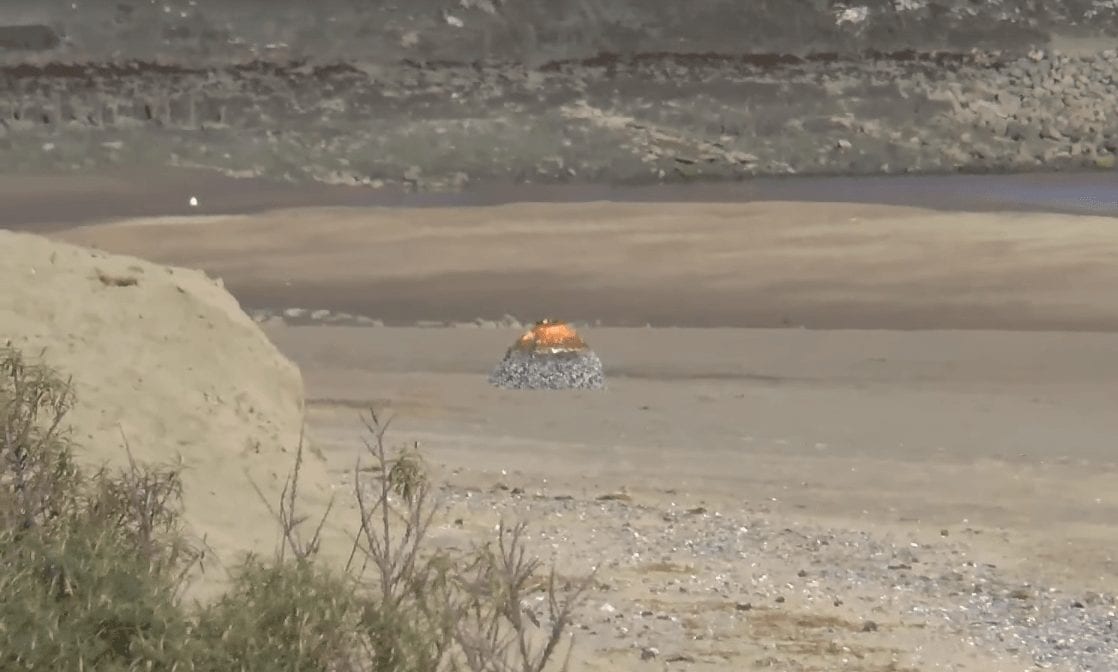 During their day out at the beach, the Gravells noticed something strange had washed up on the sand.

And as the strange item interested both the parents and the kids, the whole family decided to investigate… speculating as to what it could be. But they could never have suspected what the unusual object really was. 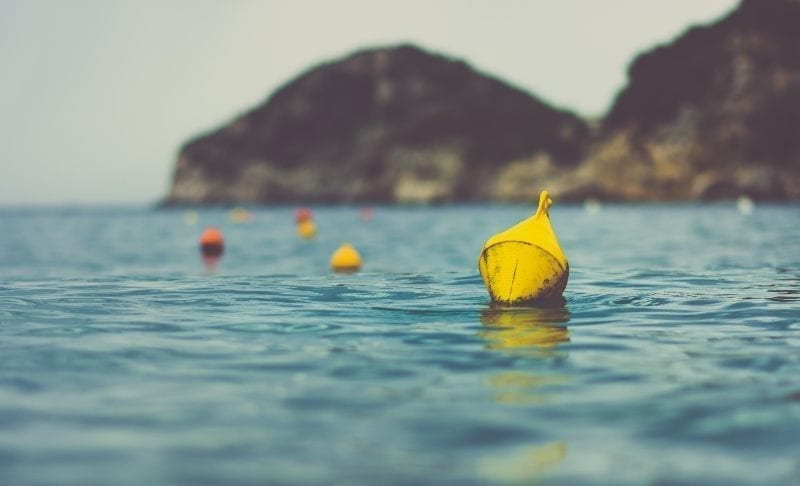 The mass in question had seemingly washed up onto the beach from the sea.

It was also round in shape, so their first thought was that it must be a buoy that had come loose and washed ashore. But what was really fascinating to the family was the large number of barnacles that were attached to the huge object. But the barnacles were obscuring something far more sinister than a buoy. 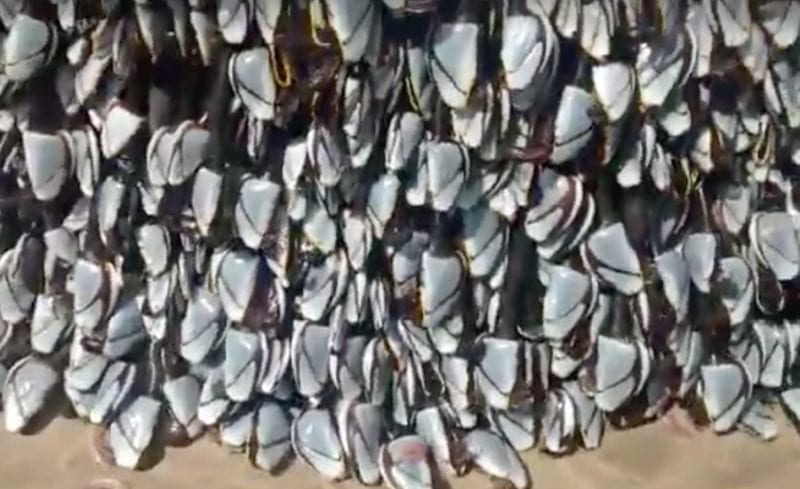 Explaining what had attracted them to the “buoy”, Kelly later told ABC News, “We were more fascinated by the barnacles on it.”

And it seems that little Ellis, in particular, wanted to get a closer look at the otherworldly item. Kelly added, “My son was touching it and was knocking on it a little bit.” If the family had really known the object’s purpose, they would have been running for the hills. 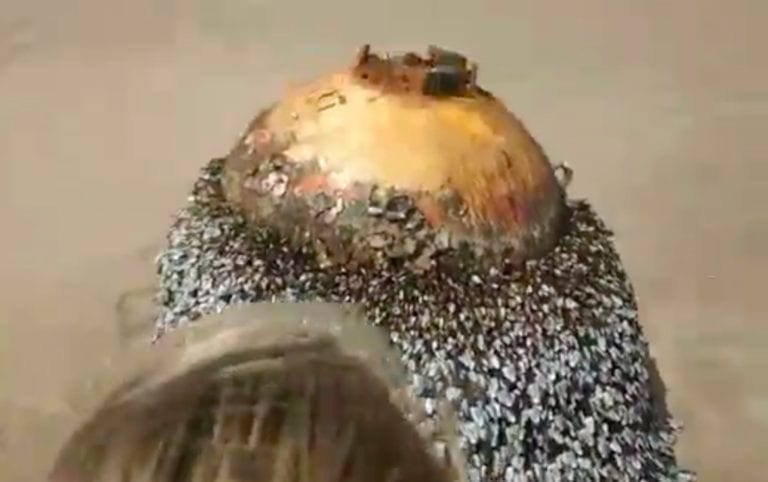 Gareth wrote on Facebook, “Ellis was fascinated with the ‘sea monster’ washed up in Burry Port beach!”

The dad’s sweet post attracted a number of reactions and comments from other unsuspecting followers, too. At the time, though, Gareth was seemingly unaware that the “sea monster” he’d encountered was truly something to be feared… and that they had been in harm’s way during their innocent beach outing. 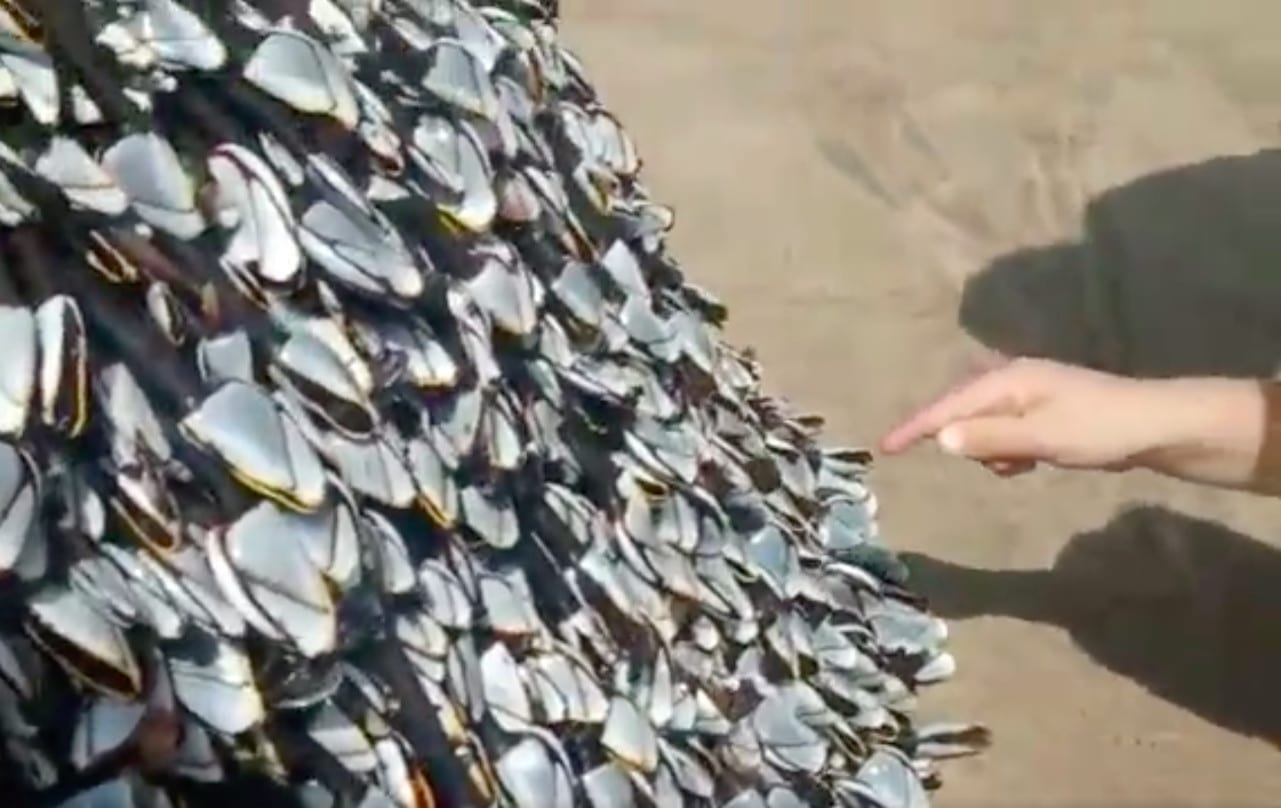 The Facebook post continued to attract likes and shares. But what everyone had been so fascinated by on the beach that day had actually put the family at risk.

But that knowledge only came five days after their trip to the beach. It was then, you see, that a friend contacted them upon learning of the true nature of the “buoy” in their photos. 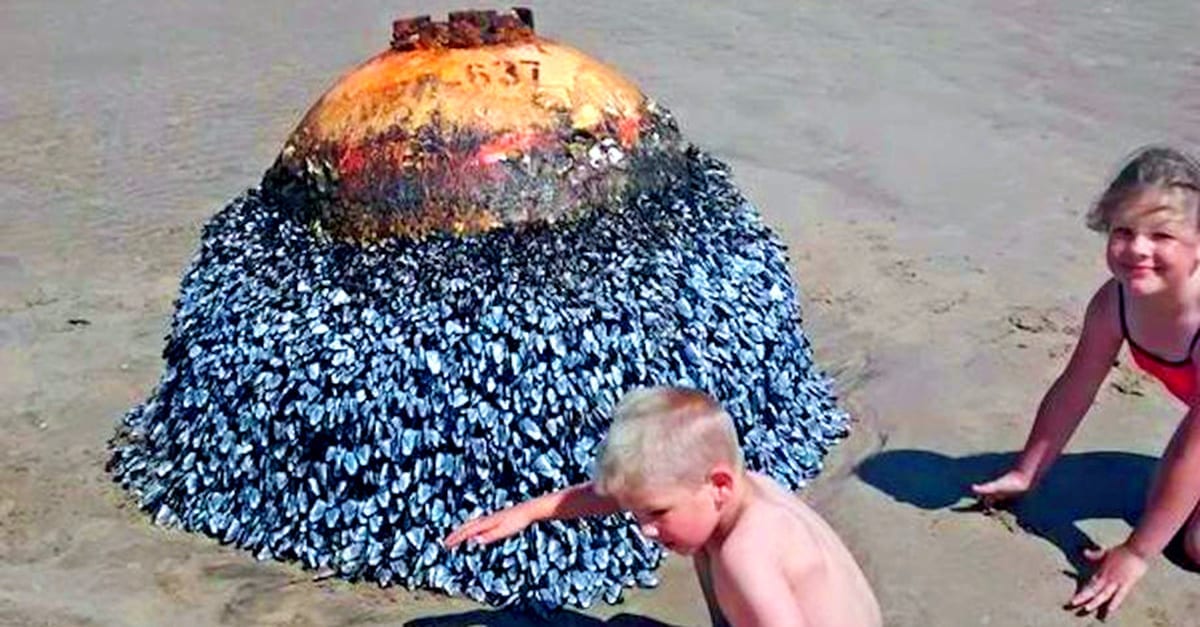 Then, the Gravells were contacted by the authorities. Carmarthenshire County Council press and communications officer Allison Thomas-David revealed the true identity of the sphere to ABC.

“It very much looks like a buoy, which we get on the regular, but around it was gooseneck barnacles,” she said. “Of course, as the barnacles started dropping off, that’s when we could see writings exposed.” And the odd “buoy” turned out to be more dangerous than anyone could ever have imagined. 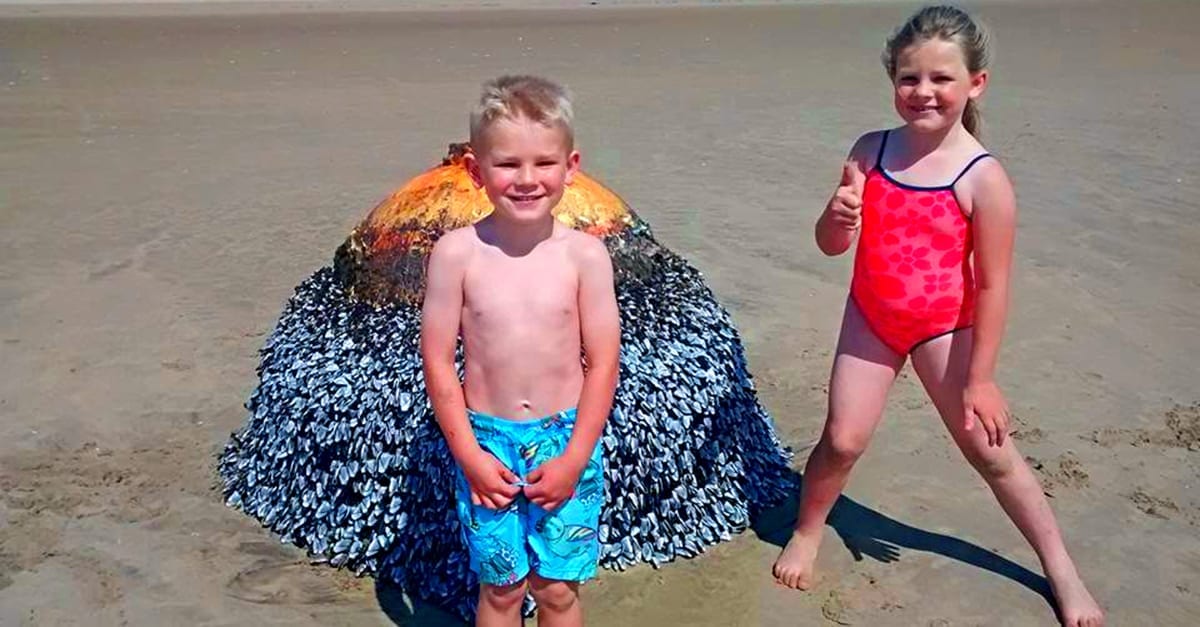 And although Thomas-David didn’t elaborate on what the newly-discovered inscription had said, she confirmed that the words had revealed the deadly truth of the object. As a result, then, the item needed to be destroyed to avoid anyone being harmed, and it was most important that the item wasn’t touched by beachgoers.

“[It] was picked up by the coastguard who then notified the bomb squad,” the council employee revealed. 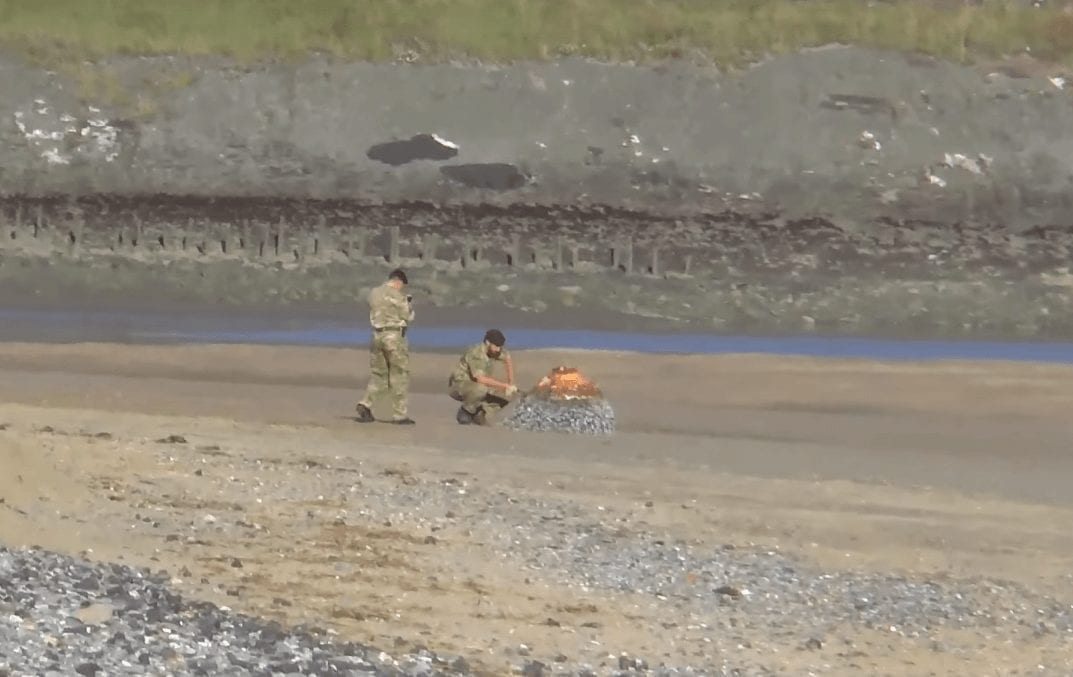 You see, the strange mass with which the Gravell family had interacted was, in fact, an unexploded United States military mine. The bomb was also reportedly 70 years old, which dated it back to around the time of World War Two.

And even though the exact model of the weapon wasn’t clear, it had become obvious to investigators that the “buoy” was indeed some kind of explosive. 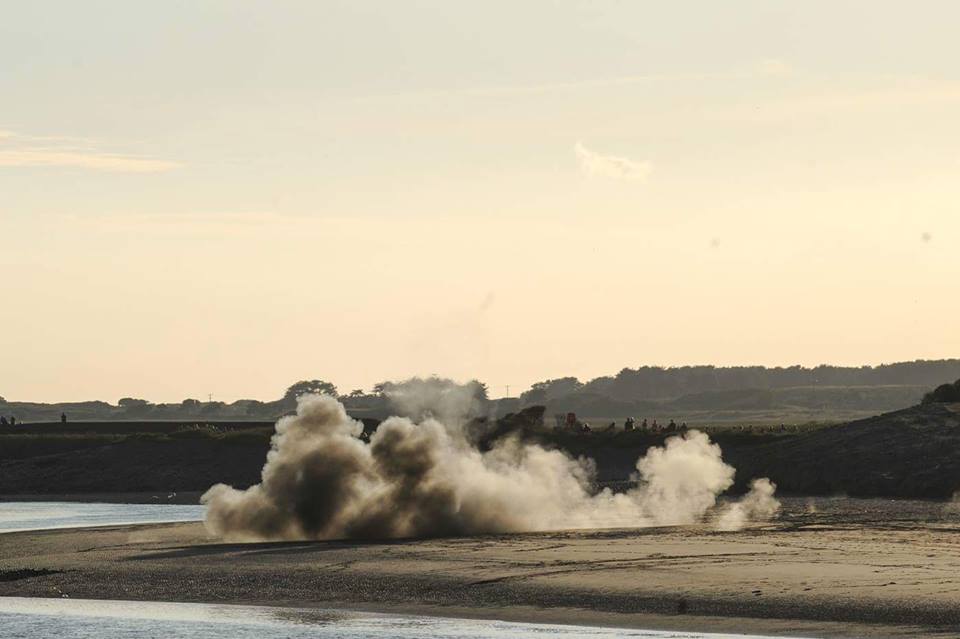 So, upon realizing the potential danger that the mine posed, officials cleared the beach to ensure the safety of the general public. The Gravells were, naturally, horrified. “Obviously, we evacuated the beach straight away,” Thomas-David told ABC. 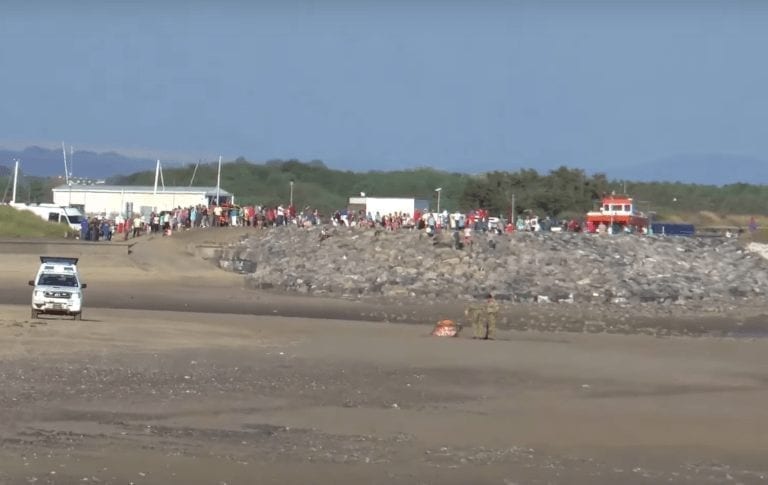 News of the discovery of the decades-old explosive reached others in the area, too, as the nearby Pembrey County Park reported the incident in an August 2015 Facebook post.

“West Beach at Burry Port Harbor is closed temporarily due to military mine found washed up.” And after the warning was up on the social media site, it soon became clear that the Gravells weren’t the only people who’d crossed paths with the mine. 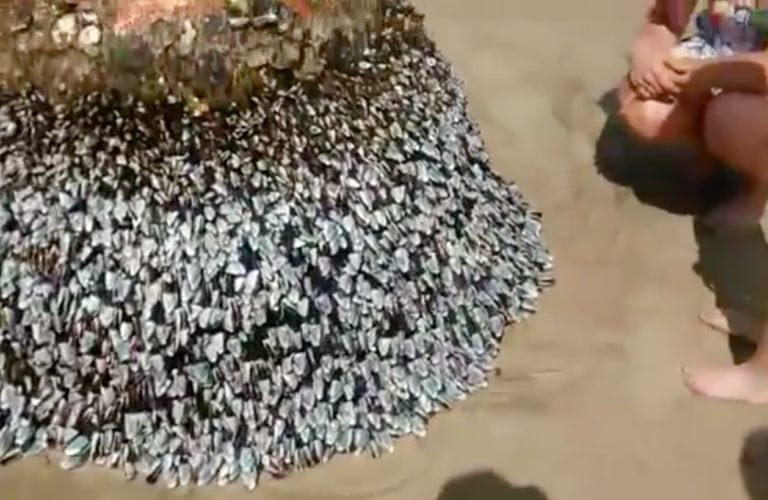 “My wife walked the dog [past the object] early this morning and then reported it to the coastguard. [The coastguard] later phoned her back to confirm it was a 2nd World War mine and then cordoned off the beach and called the bomb squad.” 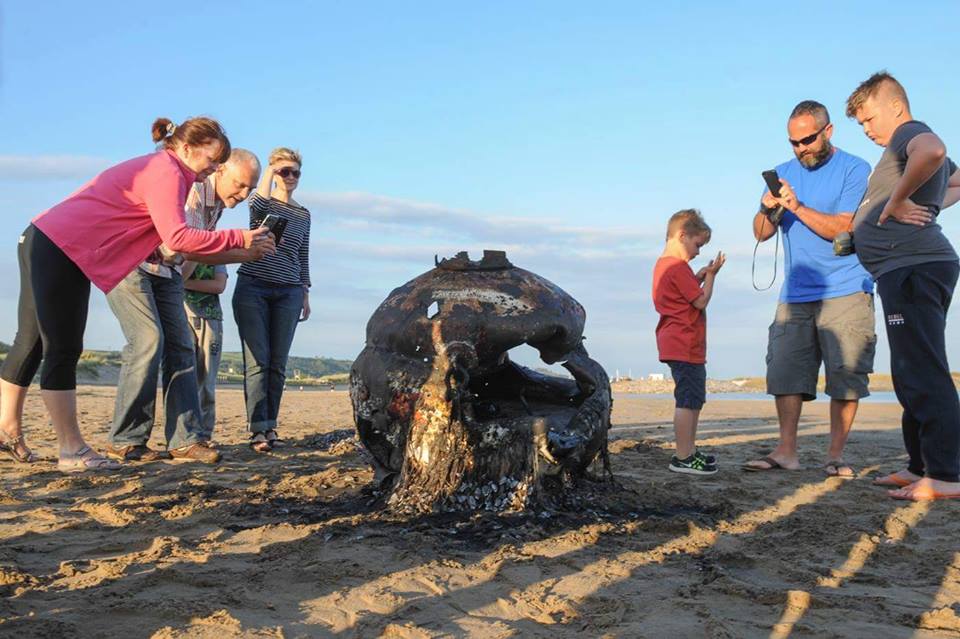 Then, the old mine was detonated with a controlled explosion carried out by the U.K’s Royal Navy. In the small town of Burry Port, the detonation was quite an event. Hundreds of people gathered on the shore and watched the blast from a safe distance, cheering and clapping.

Among the onlookers was the Gravell family. 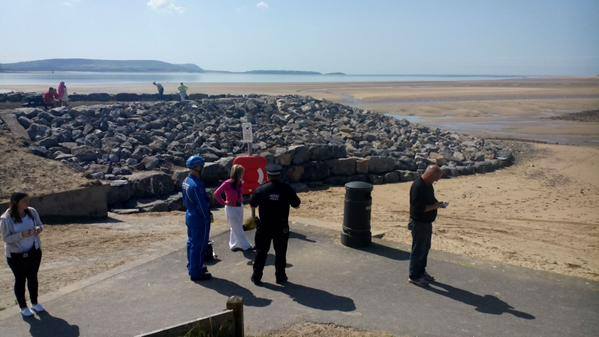 But the Gravell family wasn’t cheering. They watched the event with somber expressions on their faces, sharing looks when the mine disappeared in a cloud of smoke.

No doubt, they were contemplating what would have happened if they had been unfortunate enough to set it off. They knew they were very lucky to have escaped alive. 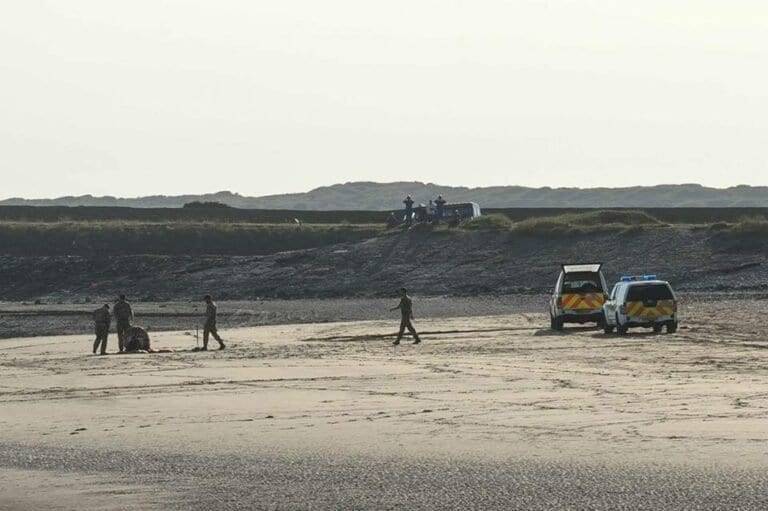 In an interview with CBS News, Kelly shared his feelings upon seeing the mine detonated: “We were thinking, ‘We’re really glad that didn’t happen at the beach.’” But their youngest, Ellis, had another concern to share – but it wasn’t about the danger the family had been in, but about the barnacles.

“Are the little animals on there okay, mummy?” 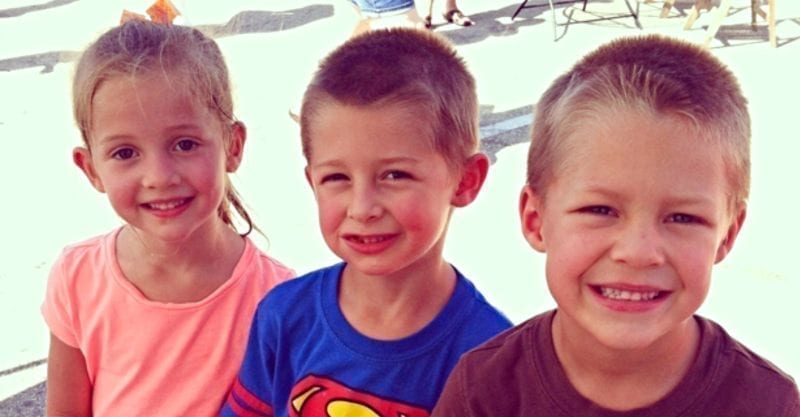 But while that was the end of the mine, the Gravell family continued to relive their brush with the explosive. “We get things washed up all the time, so we thought it was a buoy,” Kelly explained to ABC News.

“We never thought for one second it was a bomb… the realization that [the mine] was a bomb – it was completely shocking for us,” Kelly admitted. “We realize now just how lucky we were.”