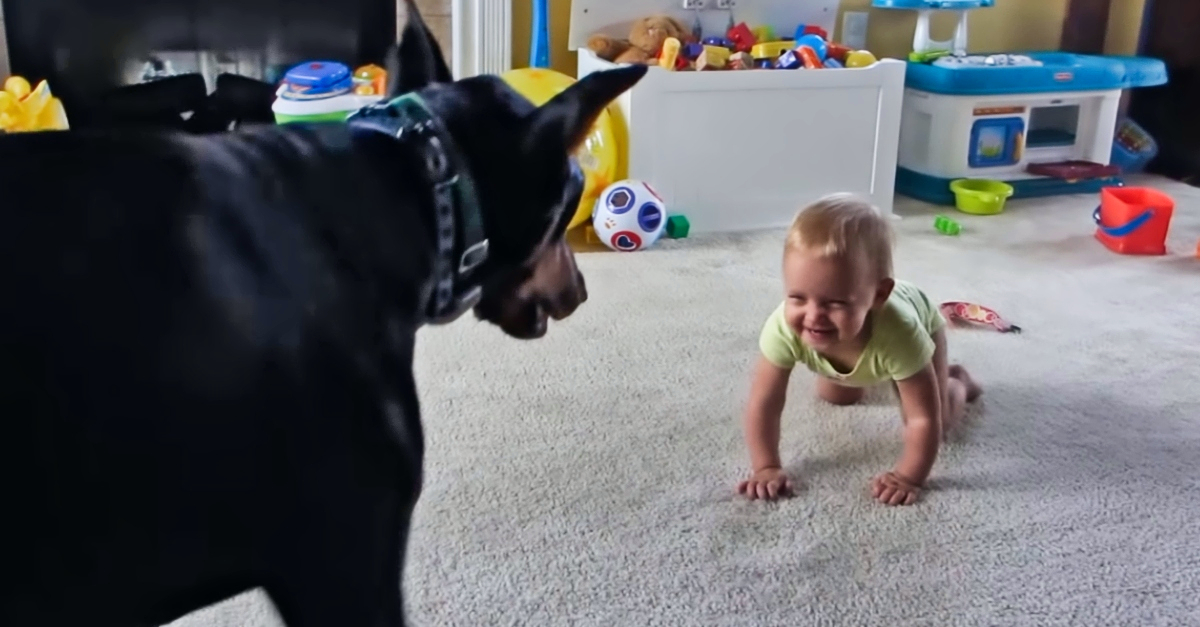 She was frozen and stunned. Despite having had the dog for only a few days, she was sure he had a gentle nature and would not pose a threat to her family. Yet here he was, manhandling her child. She had only had her back turned for a few seconds.

She got ready to retaliate, but then she noticed something that made her think twice. And when it dawned on her what was really going on, she couldn’t believe she had been this close to the unimaginable.

New Member Of The Family

And it all began when Catherine Svilicic and her husband had their daughter, Charlotte. After a few months of being a family of three, they decided to expand it further.

But, rather than have another baby, they thought it would be good for Charlotte to have a furry brother or sister. This would teach her responsibility and give her a loyal companion. But they didn’t want just any dog.

The Svilicics thought of buying a puppy from a breeder so they could get a dog with the exact characteristics they needed for their family. But they also wanted to give a loving home to a dog who didn’t have one.

As fate would have it, they soon learned of a rescue dog who had originally come from a breeder. The only problem was that his breed had a reputation for aggressive and unpredictable behavior.

The dog in question was an adult male Doberman Pinscher. Dogs of this breed were originally bred as personal protection animals, so they are genetically predisposed to show ferocity and aggression.

Their reputation certainly mirrors those traits, even though modern breeders have bred them to be more gentle and friendly. It certainly doesn’t help that many Dobermans are used as guard or police dogs. But there was something special about the dog that Catherine encountered.

This Doberman had been bred by Kerry Kinder, owner of the Doberinling Boarding Kennels in Atherton, Australia. She sold him to a customer but later found out that he was being mistreated so she rescued him.

His condition was dire: he was starved and had broken ribs which indicated he had been beaten. It was so bad, in fact, that vets pondered the possibility of putting him down. But then Catherine came into the picture.

Catherine’s husband had some reservations. Had they chosen the right dog for the family? And had they really thought everything through? He didn’t want the excitement of getting a new family member to cloud their judgment.

But his reservations were quickly swept away as he got caught up in the excitement – they were getting a dog!

Even after learning of his turbulent past, Catherine couldn’t help falling in love with this dog once she met him. He had a personality that made her feel at ease – and so, despite the warnings, she adopted him and named him Khan.

She couldn’t wait to bring him home to meet his seventeen-month-old daughter. But that didn’t mean she was going to be reckless with a strange new dog in her house. She decided to take every precaution.

For the first few days that Khan was in Catherine’s home, neither she nor her husband took their eyes off him. Baby Charlotte was mesmerized by her new furry brother, and he seemed to behave pretty well around her, always acting calm and gentle.

Catherine thought to herself that she’d made the right decision, although she remained careful when the dog and the baby interacted. Then, one day, her whole perspective changed.

Four days after bringing Khan home, Catherine took Charlotte out into the yard and let the two of them play together while she washed the dishes.

As if sensing that something was amiss, she glanced out the kitchen doorway and was met with a sight she’ll never forget. But before she could make a move to stop it, it was already too late.

Khan kept nudging Charlotte and pushing her with his muzzle, something Catherine had never seen him do. He was pushing the baby around, as if he was trying to get her to react.

Charlotte was oblivious and continued to toddle around. Then, he clamped onto her diaper with his teeth. Catherine bellowed Khan’s name as she watched in horror.

Catherine’s mind raced at a million miles a minute. She had heard of dogs just snapping, but could this have happened to Khan? She couldn’t help but feel like it was all her fault. She should have been paying more attention. She shouldn’t have let Charlotte go outside alone.

Had they been so overwhelmed by the excitement of getting a new pet that they had refused to see what kind of dog he really was? Then, Khan did something that almost made her heart jump out of her chest.

Khan grabbed Charlotte by her diaper and tossed her about three feet across the yard – like she was a rag doll. Catherine could not believe what she was seeing, and for a moment she froze in place not knowing what to do.

She had one thing on her mind, and one thing only. She had to see if Charlotte was okay. Then, she’d deal with Khan.

Catherine ran to her daughter and picked her up in haste. she checked her all over until she was satisfied that she was unscathed. She was surprised to see that there wasn’t a single scratch on the child.

When she turned her attention to Khan, she half expected him to attack her as well, but instead, the dog did something strange.

Khan was struggling to stand on his feet, panting heavily and salivating. He lifted his front paw as if in pain. Then, his breathing grew labored and he collapsed.

Khan was deteriorating right in front of her eyes. Something else was clearly going on here. Catherine couldn’t understand what had happened. Then, she saw it.

A Brown King snake lay coiled in the grass – one of the most dangerous snakes to children in Australia.

Although these snakes are not usually aggressive, this one had had a protective Khan to contend with. Khan had flung Charlotte away from the danger and had sacrificed himself. But would he pay the ultimate price?

“If I had not seen it with my own eyes, I would never have believed it,” Catherine said later. It might have been a bit rough, but it saved the child’s life. That said, Khan himself did not come out unscathed.

Catherine realized that Khan must have been bitten in the process of protecting baby Charlotte. Knowing the dangers of Australian wildlife, Catherine was well aware it was a race against the clock now. Khan needed to get to the vet and receive antivenom fast. There was only one problem.

Catherine was home alone with Charlotte and Khan, a 90-pound dog. Still, she wasn’t about to let him die after he had saved her baby’s life. With as much strength as she could muster, she picked up the injured dog and somehow got him in the front seat of her car.

“If you asked me to carry his weight right now, I don’t think I’d be able to do it,” she said, realizing it must have been the adrenaline rush. Now it was on to the vet.

Racing To The Vet

Driving as fast as she could – and probably ignoring some traffic regulations – Catherine made it to the vet, who rushed Khan in and gave him a shot of antivenom.

Though Catherine was anxious to know how her dog was doing, the vet told her they’d have to wait till the next morning to see if the antidote had worked. Reluctantly, she went home, not knowing what the outcome would be.

King brown snakes, or Mulga snakes, are the most widespread venomous snakes in Australia. Though their venom isn’t known to be fatal to adult humans, it definitely could kill a dog or small child.

Perhaps thanks to his size and weight, Khan made it through the night. An expert believes it’s possible he survived because the snake wasn’t able to inject all of its venom into his paw. Whatever the reason, Catherine was extremely grateful.

“If Khan wants a gold bowl, Khan gets it. We owe him for the rest of his life,’’ said Catherine. Khan’s breeder, Kerry, knew he had it in his blood.

In fact, she mentioned his grandfather once saved a child in similar circumstances. And Khan himself was grateful to the Svilicics for giving him a loving home. “He was starving for attention and wanted to be loved because he came from an abused home, so I’m not surprised about what he has done at his new home,” Kerry added.