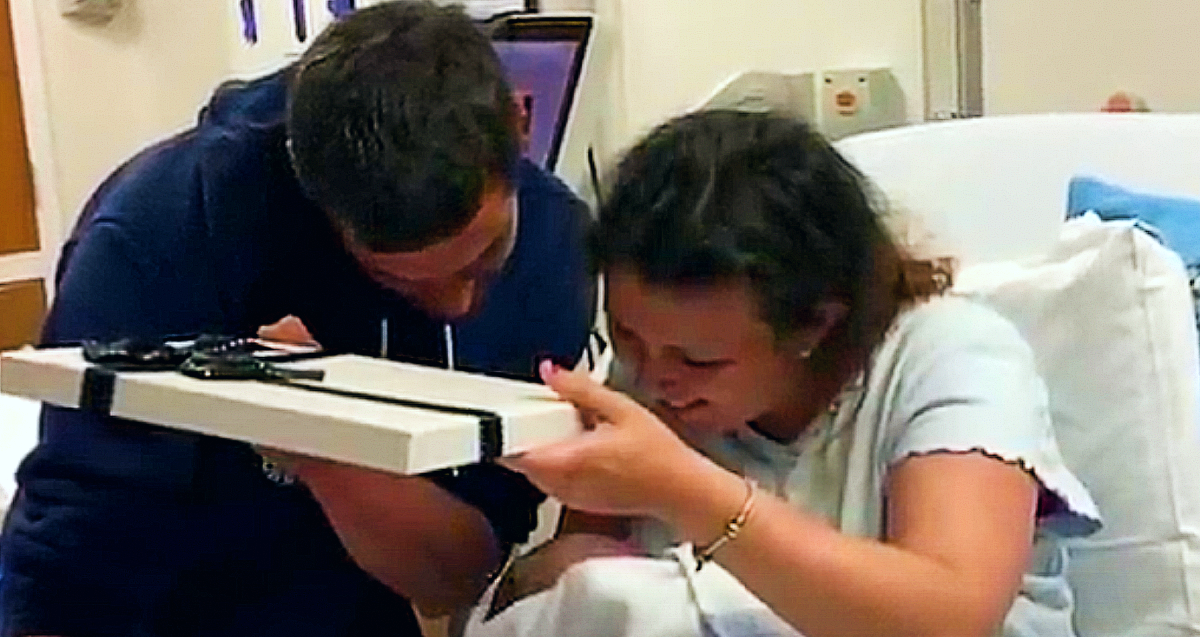 She sat in the hospital bed among the beeping machines, holding her newborn baby. She was exhausted from the birth but elated to finally have her son in her arms.

But when her husband walked over and handed her a box she’d never seen before, she didn’t know what to think. Inside was the secret her mother had taken to her grave.

Katrina held the pregnancy test in her shaking hands and unwrapped a second one just to be sure. The second one told her the same thing – she was pregnant.

She couldn’t contain her excitement as she told her husband, Danny. But just when the couple thought things were looking up, the bad news came.

Katrina’s mother, Joanne, hadn’t been well lately, so she made an appointment with her doctor.

Unfortunately, when the biopsy came back, it brought the news nobody wanted to hear: she had an aggressive form of lung cancer. It was terminal, and she only had a few months left. Katrina and her sister, Sarah, were devastated.

Katrina just couldn’t process the news. She couldn’t bear the thought that her beloved mother, who had been there for her entire life, would soon be gone forever.

And, even worse, her mother wouldn’t be there when her baby boy entered the world. She would never get to hold her grandson, and her grandson would never know her. She turned to her sister for support.

Sarah and Katrina had always had a special sisterly bond, so it was only natural that they turned to each other for comfort when they heard about their mom’s terrible diagnosis.

They resolved to put on brave faces and spend as much time as they possibly could at their mother’s side in those final weeks. Little did Katrina know, their mom was carrying a secret.

Katrina was, understandably, at odds with her feelings. She couldn’t reconcile the joy of being pregnant with the anguish of imminently losing her mom.

Although this was meant to be one of the happiest times in her life, she couldn’t feel it fully while her mother was slowly being taken away from her. When the day came, she felt numb.

Katrina and Sarah had watched the strong, brave woman they knew deteriorate into a shell of her former self, but they had tried to remain strong for her.

Finally, the day came when their mom gave up her battle with cancer. They said their tearful goodbyes and stayed by her side right to the end. But their mom had one final surprise up her sleeve.

Katrina was devastated that her mother wouldn’t be there to meet her grandson – they had lost her just six months before she was due to give birth. Nevertheless, life went on.

Katrina’s pregnancy progressed without a hitch. On Friday the 13th of that May, she gave birth to a beautiful baby boy, surrounded by her sister, husband, and other loved ones. But still, someone was painfully missing. But there was a surprise in store.

Katrina’s sister Sarah is a prominent YouTube vlogger. She and her husband had millions of subscribers to their channel, so naturally, Katrina’s birth was shared with the world, too.

But what nobody knew was that Sarah and her mom had made a special pact just before Joanne had passed away, and now was the time to reveal it.

Sarah had been holding onto her mom’s secret for six months. Just before Joanne had passed, she had given Sarah special instructions for the day of the baby’s birth.

Sarah took the box in her hands and gave it to Denny. She told him to take it to Katrina, who was still recovering in her hospital bed, waiting for her baby boy to be cleaned and weighed.

Katrina sat in the hospital bed holding her newborn baby. She was exhausted from the birth but so happy to finally have her son in her arms. Sarah kept the camera rolling for the bittersweet moment that followed.

Denny walked over to his wife and baby and handed Katrina a box she’d never seen before. Inside was the secret her mother had taken to her grave.

Katrina untied the black ribbon, opened the box, and immediately began to cry. A whiff of her mom’s favorite perfume, and a gift. She carefully lifted out a baby onesie and read the embroidery on the back – the name ‘Harrison’.

Katrina could hardly breathe through the tears. Her beloved late mom had named her son from the grave.

You see, when Katrina and Sarah had found out about their mom’s terminal illness, they still desperately wanted her to be a part of her grandson’s birth.

So the sisters had come up with a heartbreakingly beautiful plan. Just before Joanne passed away, Sarah asked her to name Katrina’s baby so that she could be a part of his life – even if only in spirit.

“My name was handpicked by Nanna Joanne in heaven,” the back of the onesie read.

The video of the heartfelt name reveal was uploaded to Sarah’s YouTube channel, with the description: “Due to our mum being diagnosed with terminal lung cancer just a couple of months before my sister found out she was pregnant, my sister made an incredible decision.”

Sarah continued: “Wanting our mum to have an important part in [her grandchild’s life], my sister decided my mum was to choose the name and was to tell it to me just before we had to say goodbye to her.”

“My sister and her partner wanted the name to be a surprise until the day their baby was born so his name is a secret I have been keeping for the last 6 months.”