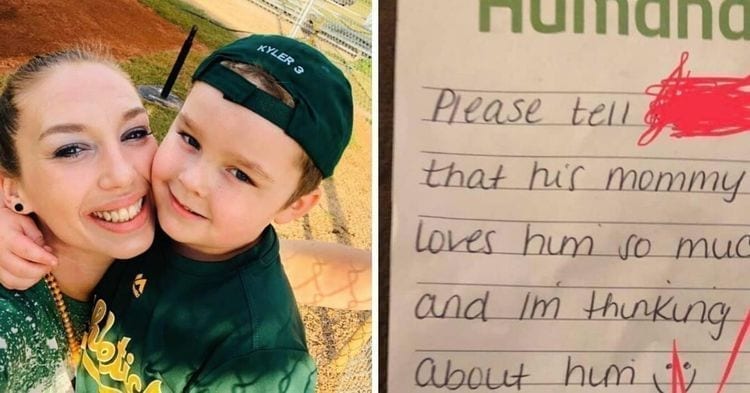 Finding the right daycare to send your child to is a very big deal. Francesca Easdon thought she had found the perfect daycare to send her son to. After three years without any problems, she was horrified when she saw the note.

Francesca had added a note for his teacher to read to her son. The note read: “Please tell my son that his mommy loves him so much and that I’m thinking about him.” To her horror, when her son came home the teacher had written “No! Put him on a diet and go away,” in black marker on the note.

Easdon was horrified by this. That was not the point of her note. As she said “I wrote this note just so at lunchtime he would have something that would make him happy and I am thinking about him.”

Just The Way You Are

“And for the record, I feel that Kyler is absolutely perfect the way he is, I’m just helping him make healthier choices. Instead of his school being supportive I am in absolute shock at what happened,” Francesca stated in her Facebook post.

“The thing that upset me the most is this is bullying,” Easdon said in an interview about the incident. “To know a grown-up, who knows how hard life is and how mean people can be, can say something like that, especially about a child … They’re sick. There’s something wrong.”

“It took a minute to register, what I even saw and I just kept re-reading it and I just stood there for a minute. When I asked them what are you planning to do about this … I let them know right then that the only resolution is that that person that wrote the note should be terminated,” Francesca stated.

Francesca was horrified with what happened and after dealing with the situation at the daycare Easdon took to Facebook to write about the experience. “I have been introducing new healthy options in his lunchbox and discussed the changes with his school,” the post began.

“And for the record, I feel that Kyler is absolutely perfect the way he is, I’m just helping him make healthier choices. Instead of his school being supportive I am in absolute shock at what happened,” the post continued.

“Of course I was absolutely livid and immediately reached out to the school. First thing this morning I was at the school waiting on the director with my mother in law for a meeting. I was assured that it was being investigated and handled, yet almost no remorse was shown,” Francesca continued.

According to Francesca, there was more reason to be concerned. “I also brought to their attention the fact that on his teachers public Facebook page there were mass posts regarding drug use and other very inappropriate content,” she stated.

Once the incident came to light the school dismissed the teacher in question who claimed that she never intended for Francesca to see the note. According to Francesca: “The teacher that wrote this note confessed while I was at work and was fired, but nothing has been done about the other situations. Zero remorse for their actions.”

Francesca has since removed her son from the school. “I am disgusted that I put my trust in these people to care for my child and this is what I get in return. I have removed Kyler from this daycare (Rocking Horse Kingwood) and am enrolling him in a beautiful new facility,” she shared.

Francesca’s post ended with: “I’m extremely hands on with my child’s care and still didn’t see this coming. Monitor your daycares closely and stay away from this facility, they do NOT deserve the privilege of teaching our children.”