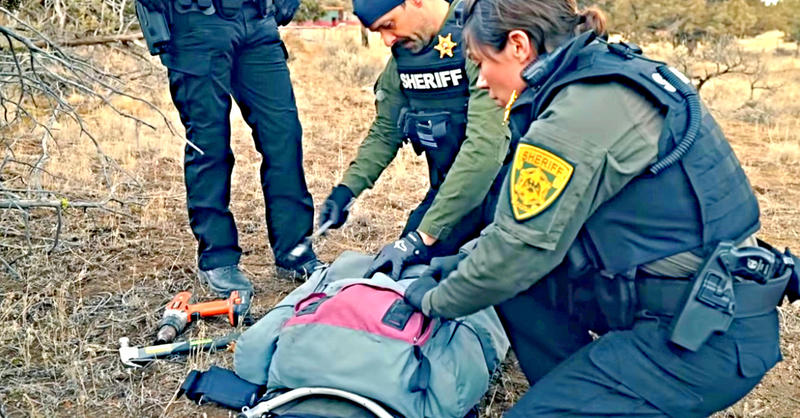 Missing In The Mountains

Park Chief Ranger Steve Kloster had seen a few cases like this before, but this particular one left a strange feeling in his gut. He knew that there was more to this case. He placed the map on the table and looked down at it, he search desperately trying to spot what he had been missing. But it seemed nearly impossible, combing through the 6,700-acre area was like looking for a needle in a haystack.

He was aware that time was no longer on his side, but there was a boy missing out in the mountains, and he had to find him. He had been missing for 11 days and there were so many unanswered questions. Why did the boy’s stepfather only report the incident now? Did he have something to do with it?

The Call Of The Wild

Eighteen-year-old Austin Bohannon had gotten himself into a desperate situation. He had accompanied his stepfather on a hike into the harsh wilderness of the notorious Smoky Mountain trails.

Although young Austin was an experienced outdoorsman and an avid hiker, the many search parties that trawled the forest for days could find no trace of him. They had sent helicopters and dogs in hopes of finding him, but they hadn’t found hide nor hair of the boy — it was as if he had simply vanished off the face of the earth.

Our story began on a normal day. Austin and his stepfather, Hubert, were hiking along a trail that they had walked many times before, but the pair didn’t realize that tragedy was about to strike in the Great Smoky Mountains National Park.

Austin and Hubert were familiar with this particular trail — familiar enough to know that they couldn’t let their guard down for a second. The perilous trail had few landmarks, which would make getting lost in the eerie canopy of trees extremely easy. Hubert and Austin should have known better.

As Hubert and Austin made their way along the winding creek, they kept their eyes on the shrubs and plants that grew alongside the riverbank. They knew that what they were doing was illegal, but the market for this particular root was huge.

Although it is forbidden to remove this plant from the national park, its root could fetch a whopping $600 per pound — the hefty sum was mainly due to health foods and energy drinks’ rise in popularity. But Hubert had no idea that he was about to make a fatal mistake.

According to Hubert’s report, it was while the pair were walking along the riverbank that he slipped on a wet rock. He flailed wildly before steadying himself, but it was already too late. His spectacles slid down his nose and plummeted into the rushing river.

Hubert let out a cry of dismay — without his glasses, he couldn’t see the trail. How would he be able to negotiate the rocky mountain path without them? Austin, knowing that leaving his stepfather’s spectacles in the river wasn’t an option. Determined, he jumped into the river after them.

Austin waded out, sweeping the bottom of the river with his feet. He prayed that he’d be able to find them. Hubert, seeing his son searching for his spectacles, jumped in after him. The pair began to wade through the thigh-high water.

Unfortunately, Hubert was almost completely blind without his spectacles. So when he slowly began to wade away and in the opposite direction to his stepson, he had no idea that this was this moment that he would regret for the rest of his life.

Hubert says that he hadn’t even known what had happened at the time. By the time he had turned around and realized his mistake, Austin was long gone. It was too late.

Austin and Hubert had unknowingly walked further and further away from each other. Hubert doubled back and called his stepson’s name, but he found no trace of him. It was as if the boy had disappeared into thin air. Thankfully, Park Chief Ranger Steve Kloster wasn’t going to leave the story at that.

Park Chief Ranger Steve Kloster couldn’t help but feel astonished that Austin’s father had waited for two entire days before opening a case with the police. But why did he wait so long?

Park Chief Ranger Steve Kloster knew that there was something strange about the whole story. He just knew it. He could feel it in his bones. After dispatching a search party, he knew that the trail had already gone cold. But he had to find Austin.

Helicopters equipped with infrared cameras as well as canine units were dispatched from the Tennessee Emergency Management Agency by the Chief Ranger.

Despite all of this the boy was still missing with no sign of him to be found. They couldn’t help but wonder what happened in the woods that day. The search stretched from days to weeks and the Chief Ranger was convinced that Austin’s stepfather knew more than he was letting on.

This wasn’t the first time he’d seen a case like this. However, he truly hoped that his gut instinct would be wrong in this case. He was missing something vital but what could it be? The Chief Ranger looked at his map and marked off the search area again.

Time was against them with such a huge area — 6,700 acres needed to be searched. It was possible that Austin was close to where they were searching but Hubert was not being very clear about the location. Why was he being so vague?

It was time that Steve Kloster and Austin’s stepfather had a very serious talk so he called him in. There was little time left as it had been days since Austin disappeared.

He knew that the boy’s stepfather held the key. He grilled Hubert about his story and what really happened that day and it wasn’t long before he gave them the clue that they needed to crack the case at last!

Hubert had told them why they really went to the park that day and the Chief knew that this would make it much easier to narrow down where Austin went missing and thus narrow down their search.

The pair had gone to find and illegally harvest wild ginseng that day. Hubert finally admitted this and handed them the plant. They only had to take one look at the piece of contraband to know this is what they needed. The Chief Ranger immediately called the local guides who would know exactly where to start looking based on this new information.

The fact that Austin was a keen outdoorsman was giving the Chief some hope. This fact might mean that Austin would still be alive thanks to his skills.

“He’s young; he’s in shape,” Park Ranger Steve explained. He added, “there’s all kinds of water out there.” The question remained that if he was alive, why had they found no sign of him in 11 days? This was worrying.

In his more than 20 years at the national park, Chief Ranger Steve Kloster had never been involved in a missing person’s search that took this long.

The Chief was almost ready to abandon the search when he decided to make one last attempt. He sent out search parties one more time. Despite everything, it seemed to be time to face the facts as the still returned empty-handed.

Meanwhile, Austin fought to survive. He drew on the skills and survival training he had received in the past. It soon became clear that theory and practice were two very different things when it came to survival.

He remembered that panicking was the worst thing he could possibly due at this time. He made sure to keep his head firmly on his shoulders and set to work. The first and most important thing he had to do was head to higher ground.

After hauling himself up a ridge nearby, he searched for a signal with his cellphone. He knew the chances that there would be reception so far out in the wilderness would be slim, but he couldn’t help but feel devastated when there were, indeed, no bars on his screen.

He had wanted to call his mother for help, but now he felt helpless. The next morning, he knew that he had to put plan B into action.

Knowing that he needed to find fresh water, Austin climbed down from the ridge and began to follow the creek until it led him to its source – all the way to the base of the mountain.

He’d found drinkable water, but there was another problem looming ahead. He had traveled for two days – but in the wrong direction.

Now, Austin had gone even deeper into the unforgiving wilderness. He would have to double back if he wanted to remain closer to where he knew the search parties would be looking for him.

The only problem was that now he didn’t even know which direction he should go. All he did know was that he had to keep moving.

Each night, Austin prayed that he would have the strength to go on the next day. But he was weakening. He still hadn’t found any food. For the first few days, he was plagued by hunger.

But then, as if his body had gone into survival mode, he just didn’t feel it anymore. But he knew he couldn’t go on like this indefinitely. Back home, his mother was worried sick.

Meanwhile, hundreds of people were searching high and low for the boy. They trawled the river in boats while the K9 units searched the forest. But, unbeknown to anyone at the time, Austin was always one step ahead or behind them.

They circled each other endlessly, but Austin was a moving target. One day, he heard the helicopters circling overhead, above the canopy – and he knew they were looking for him. But he had no way to signal them, and they couldn’t see him through the trees.

It was only on the eleventh day that Austin spotted some kayaks and a boat in the river ahead. “Luckily I saw a boat, a guy and his daughter,” he said afterward.

“I waved them down and hollered at them…” The boat’s owner immediately knew that they had found the boy that everyone had been searching for.