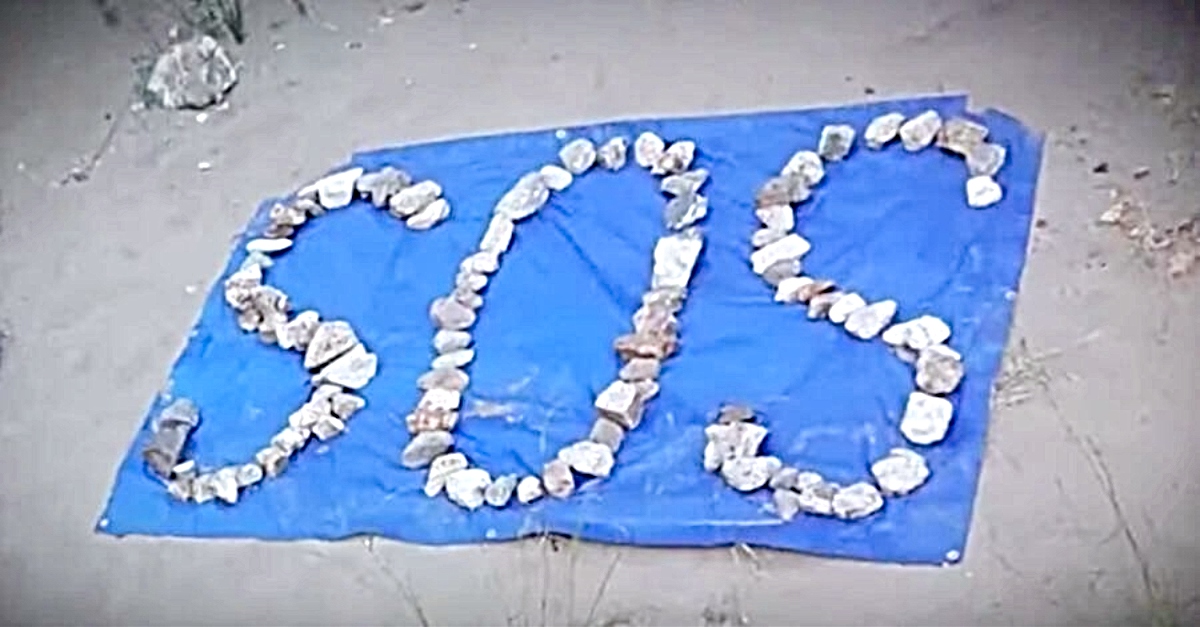 What was to be a casual weekend spent with his family in June turned out to be quite an eventful and testing time and ended off with thanking two complete strangers for them actually being alive today.

If it wasn’t for two curious and brave hikers this story could have had a very different ending. 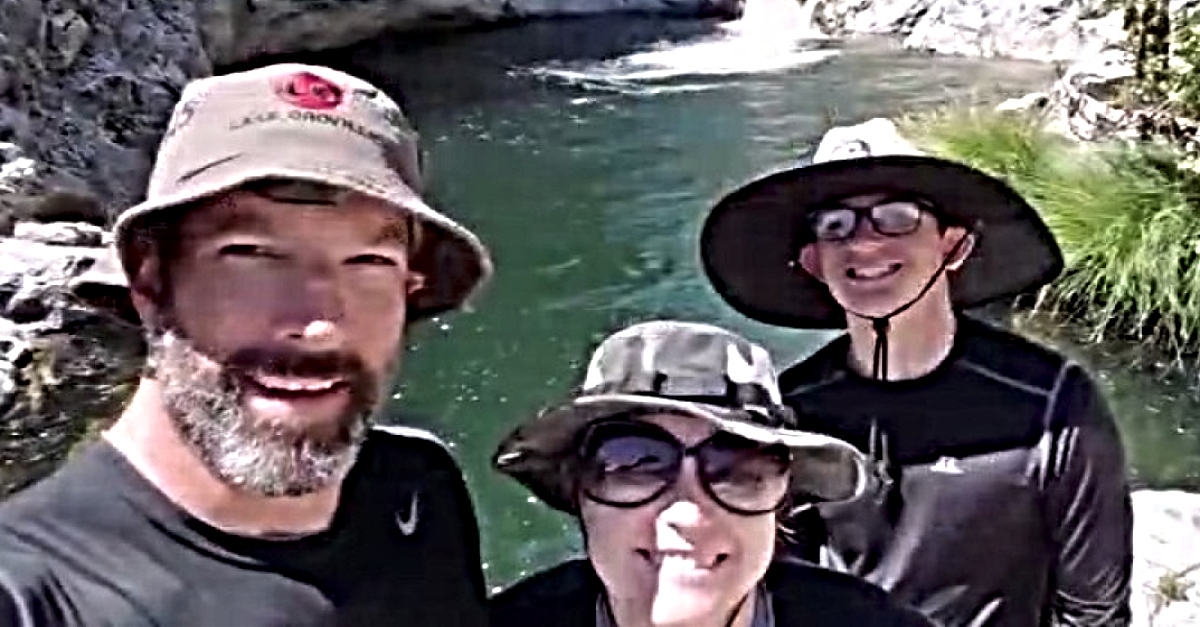 It all began when father Curtis Whitson, a 44-year-old self-employed glass and door repairman from Morro Bay, California decided to take his family to a place he loved. He, his girlfriend, Krystal Ramirez a 34-year-old bartender and his 13-year-old son, Hunter, decided to spend Father’s Day weekend backpacking the Arroyo Seco River.

He was eager to show them the wild beauty of the Arroyo Seco — a 40-mile tributary of the Salinas River in central California. 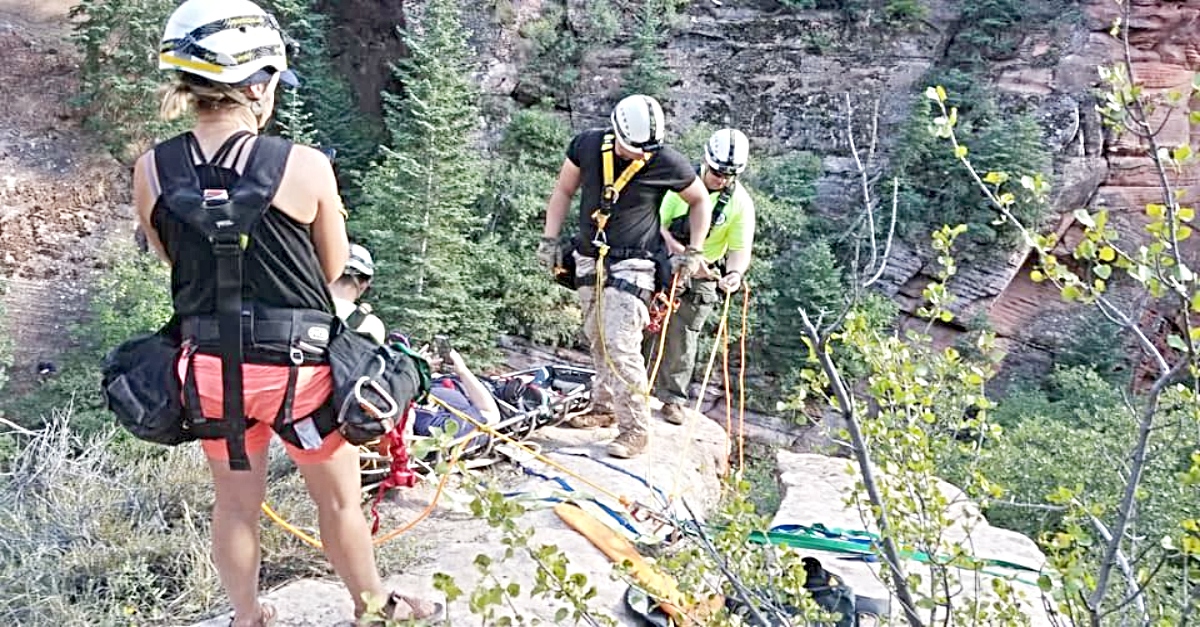 “It’s a paradise off the beaten path — a gorgeous place to take a float trip and get away from the crowds,” he said. “We were all looking forward to camping along the river, under the stars.”

The first night, they built a campfire and pan-fried a steak, serving it with quinoa and having chocolate protein bars for dessert. The last thing any of them expected was that they would become stranded. 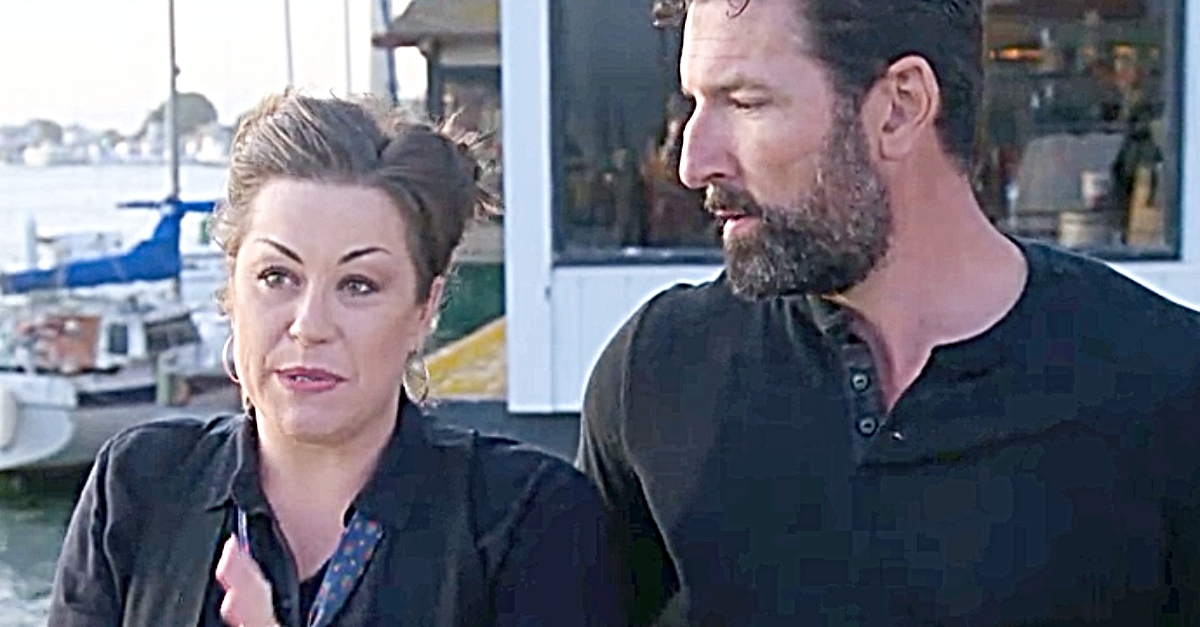 During the day they would be joyously hopping over boulders and floating down the river on inflatable tubes.

Pleasant and peaceful evenings were enjoyed sleeping under the stars bundled in lightweight mummy bags with their heads covered in mesh bags to protect them from pesky bugs. 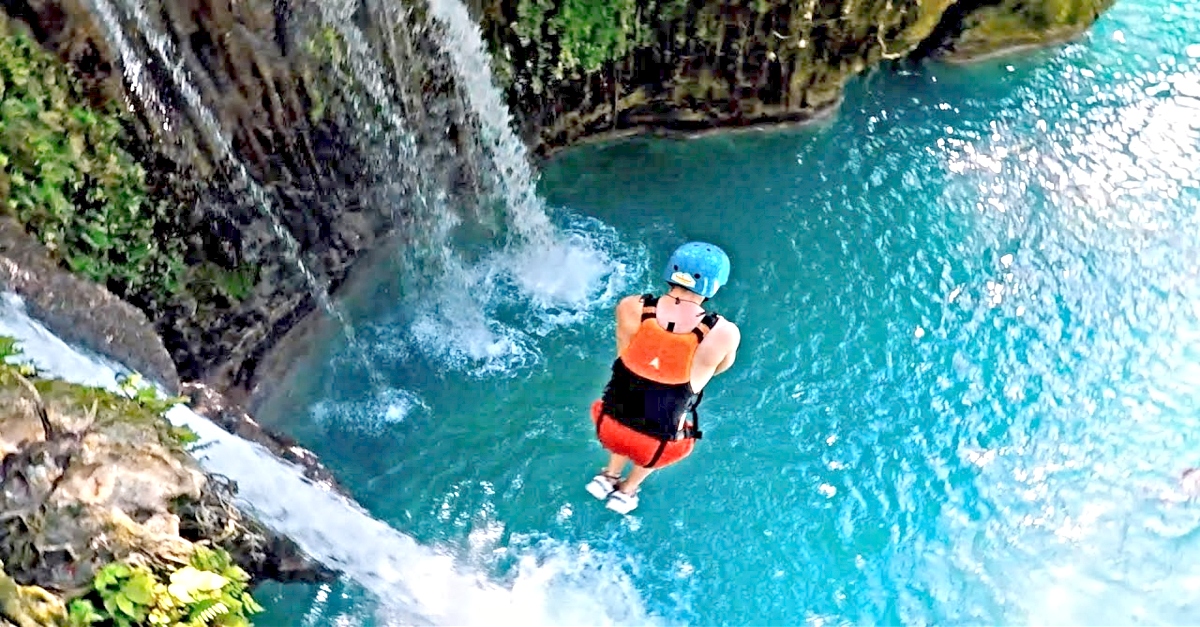 Throughout the trip, the family’s goal was to reach the Arroyo Seco narrows, float through the water shoot and down the waterfall before joining friends to float the last couple of miles down to a campground.

After two and half days of lugging 50-pound packs, the family reached the narrows, a spot in the river surrounded by solid rock up to 40 feet high on each side. 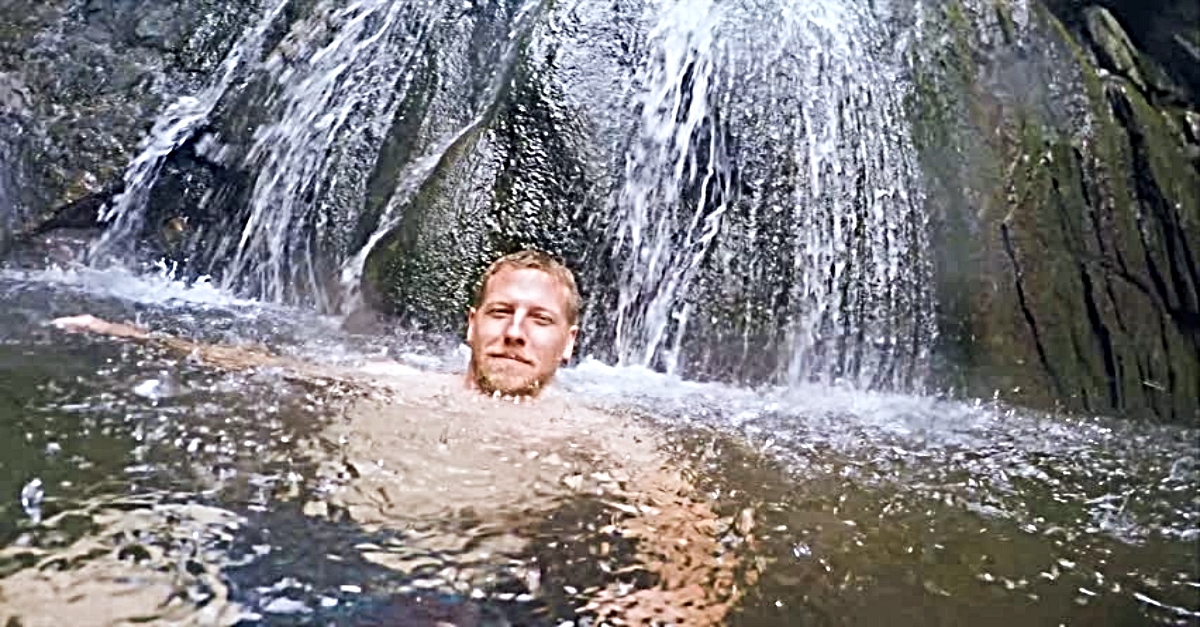 To Curtis, this was familiar territory as he was proficient in taking as many as 20 backpacking trips to the central California coastal forest each summer. 7 years ago he took this trip with the ultimate goal of reaching the waterfall.

Normally he used an allocated rope to get back down. However, on reaching the top of the waterfall he discovered that the rope to assist them getting down the perilous waterfall was nowhere to be found. 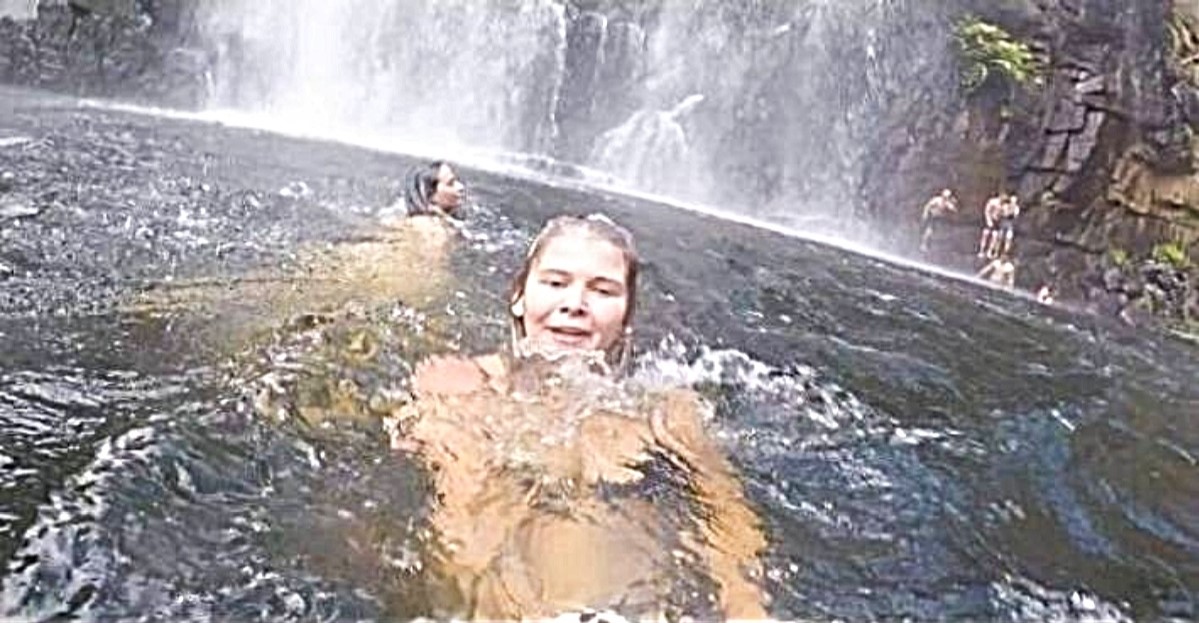 The hike back down would have been too dangerous and with no cellphone coverage, unable to call for help, they had to get creative, and really fast, too.

The water levels had begun to rise and trying to make their way down the waterfall without the assistance of the rope could have ended with disastrous results. 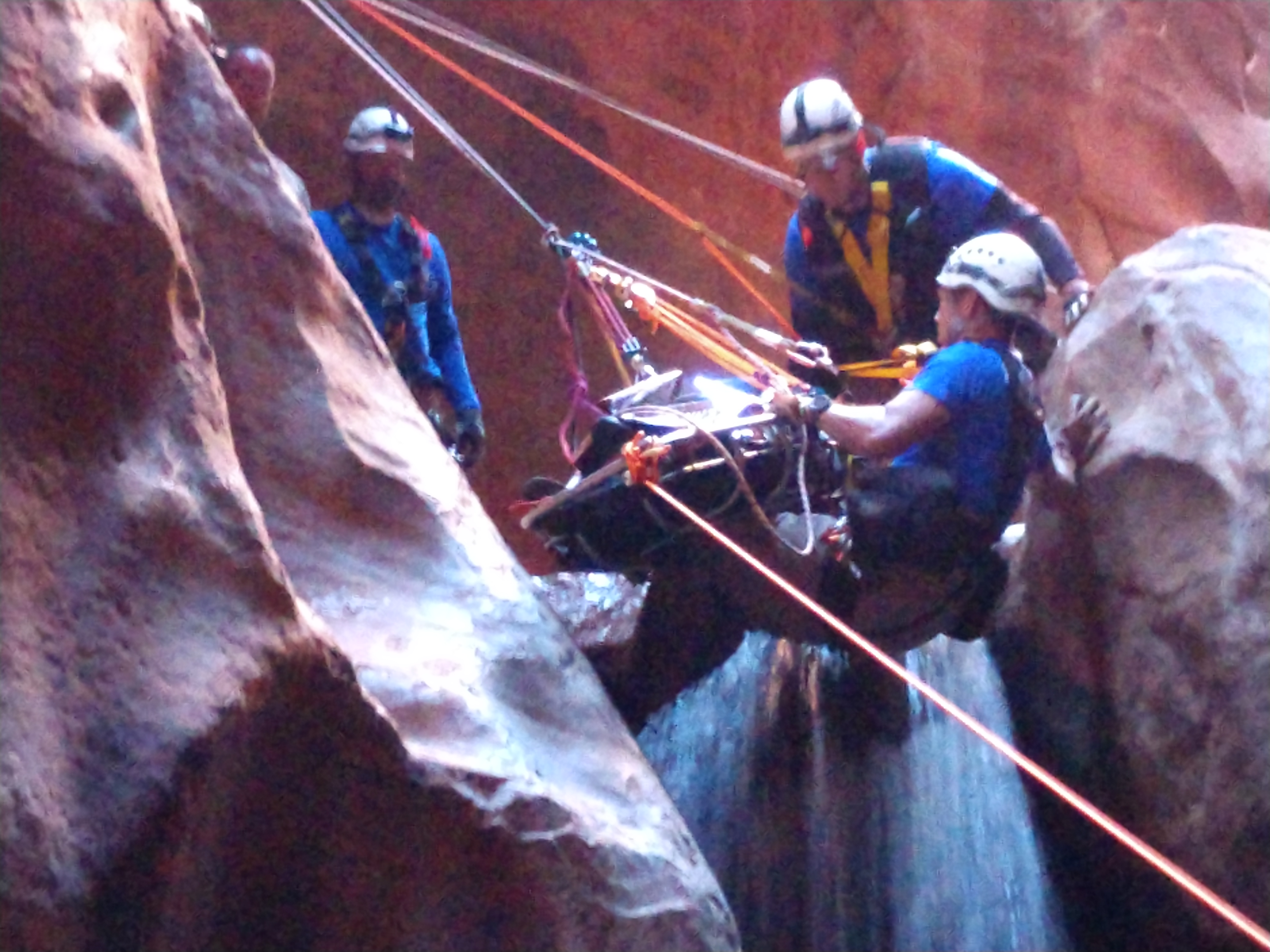 After trying to hike up and over, Whitson and his son kept hitting dead ends. There was no way out. The group of three couldn’t see anything past a bend in the canyon walls, but they heard voices on the other side. They tried yelling for help.

They tried carving a message into a stick and throwing it over the edge. Soon, however, they realized a stick wouldn’t be enough, so they came up with a new way to get someone’s attention.

Message In A Bottle 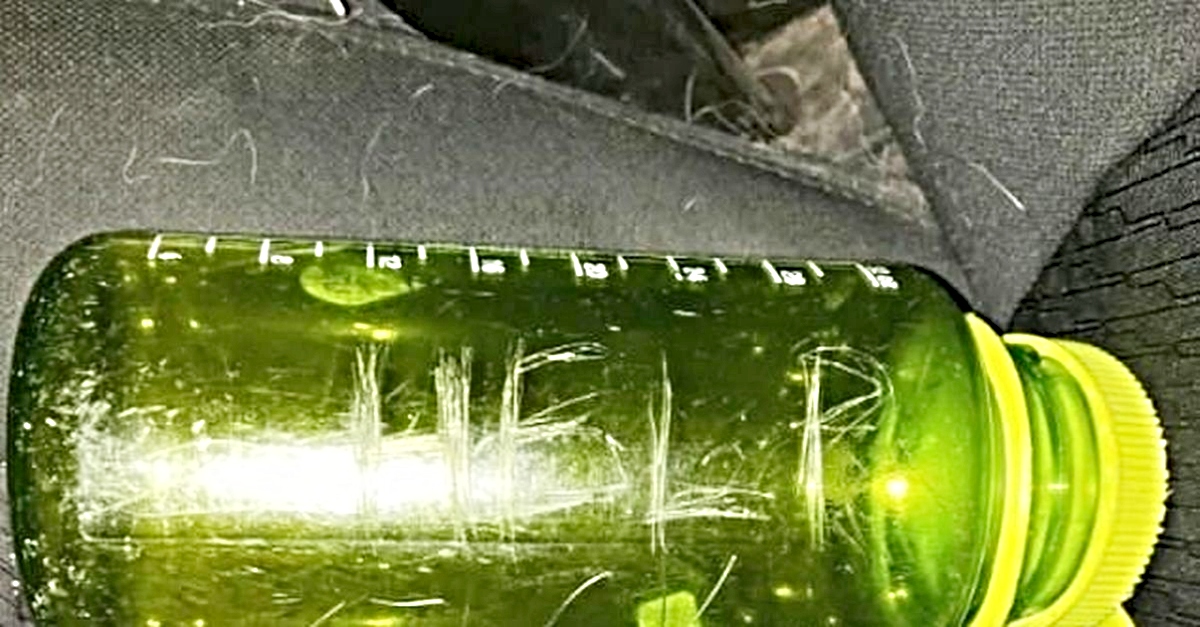 Trying to carve a message onto sticks proved to be ineffective and Curtis then came up with the idea of using an empty Nalgene water bottle. He carved the words “Help, Stuck” into the durable exterior plastic of the bottle.

Krystal, fortunately, had some paper she took along to record scores for games they played and wrote the following message on it: “6-15-19. We are stuck here @ the waterfall. Get help please” 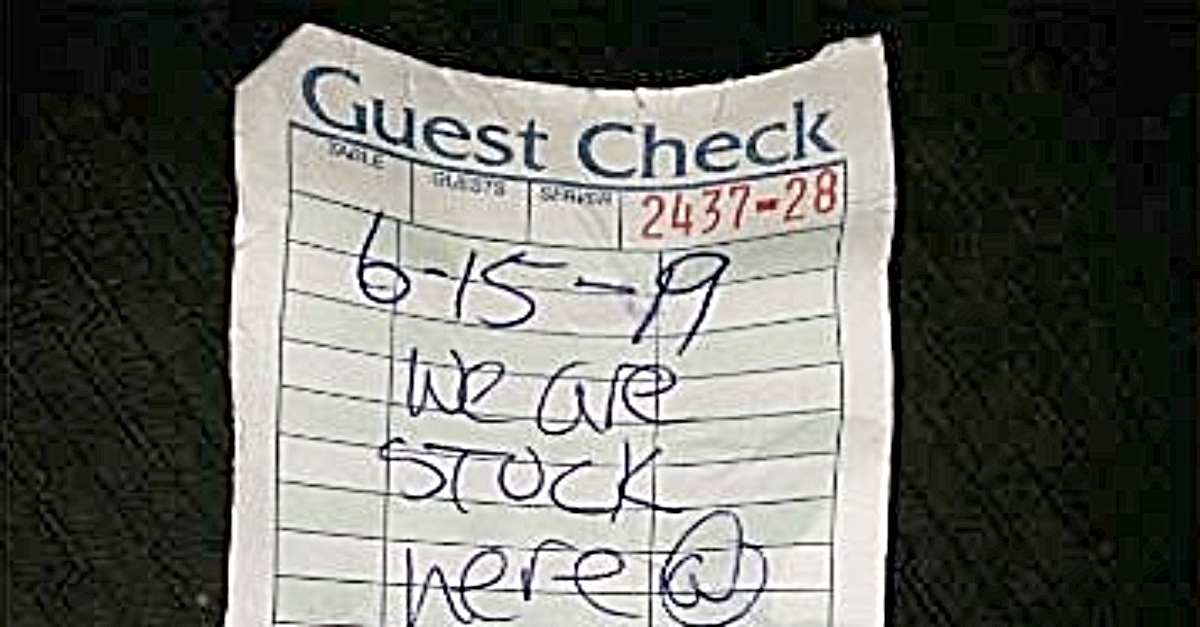 Curtis tossed the message in the bottle over the cliff and watched it being swept away by the current of the river.

Wiping his brow with a sigh of relief that it was not him and his hiking companions suffering the same fate! Now it was just a matter of waiting to see if their prayers would, in fact, be answered. 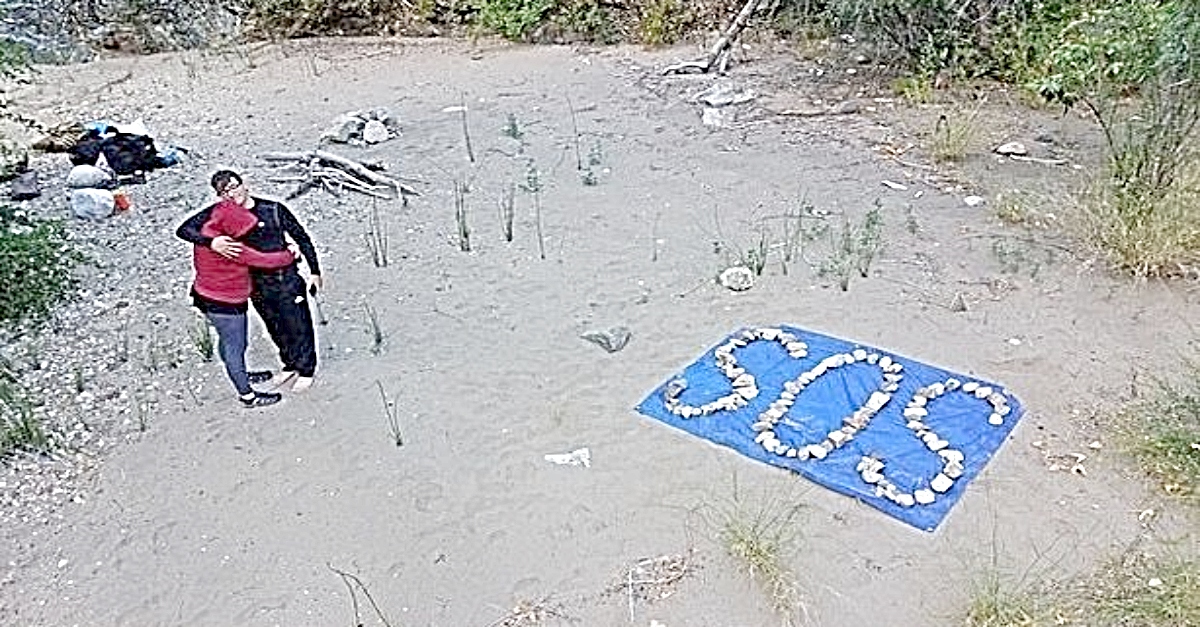 The family of hikers retreated back up the river to a small beach where they had earlier stopped for lunch. They had been able to float down from the beach in about two minutes, but it took about 30 minutes to get back upstream.

Before settling down, the family spread out their blue tarp in a clearing and assembled white rocks to spell out “SOS.” Like the sunset, they used a headlamp to keep that message illuminated. 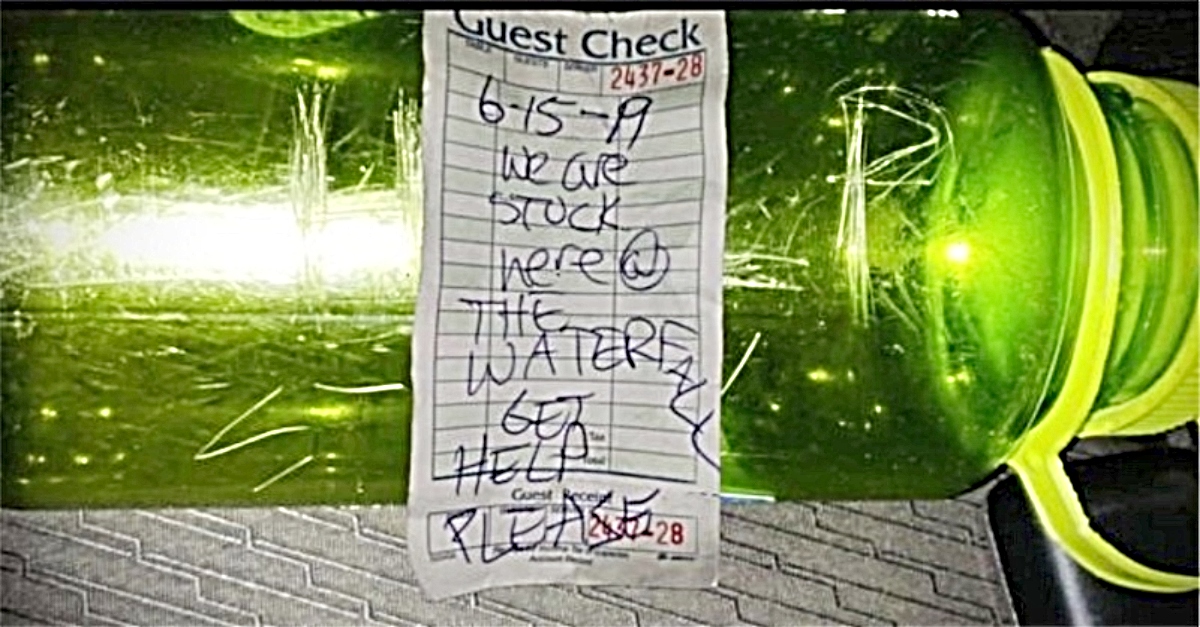 Fortunately for these hikers, there was another couple of adventure seekers exploring the nature site and stumbled across the lime green bottle.

Curious about the SOS note they found inside the bottle, the couple found a camp manager who then wisely decided to alert the authorities about it. A search and rescue team was alerted about the dilemma of the family in distress. 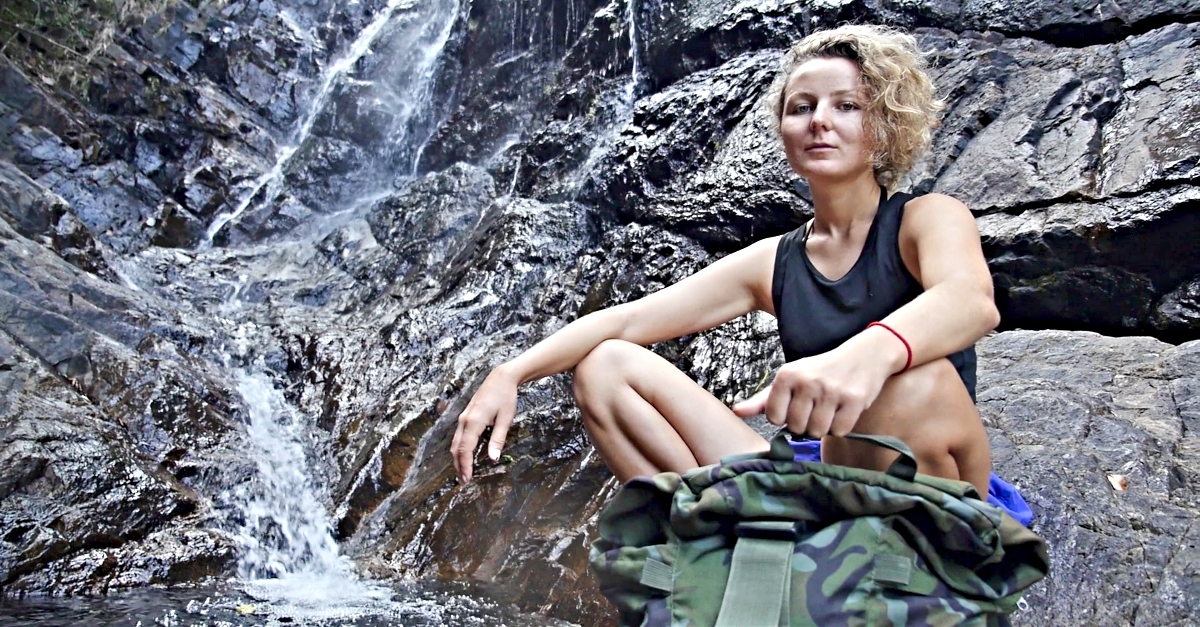 Just after 12 that evening Curtis alerted his son that help has arrived when he heard a helicopter overhead. They were surprised by the following: “This is Search and Rescue. You have been found,” someone said over the loudspeaker. “It was one of the best feelings,” Whitson gushed, “nothing was sweeter than those words uttered by CHP.”

During the rescue, the California Highway Patrol used night-vision goggles and FLIR (forward-looking infrared) technology to spot the campfire and located Whitson and his family, according to Flight Officer Paramedic Todd Bainbridge, who was on the mission. 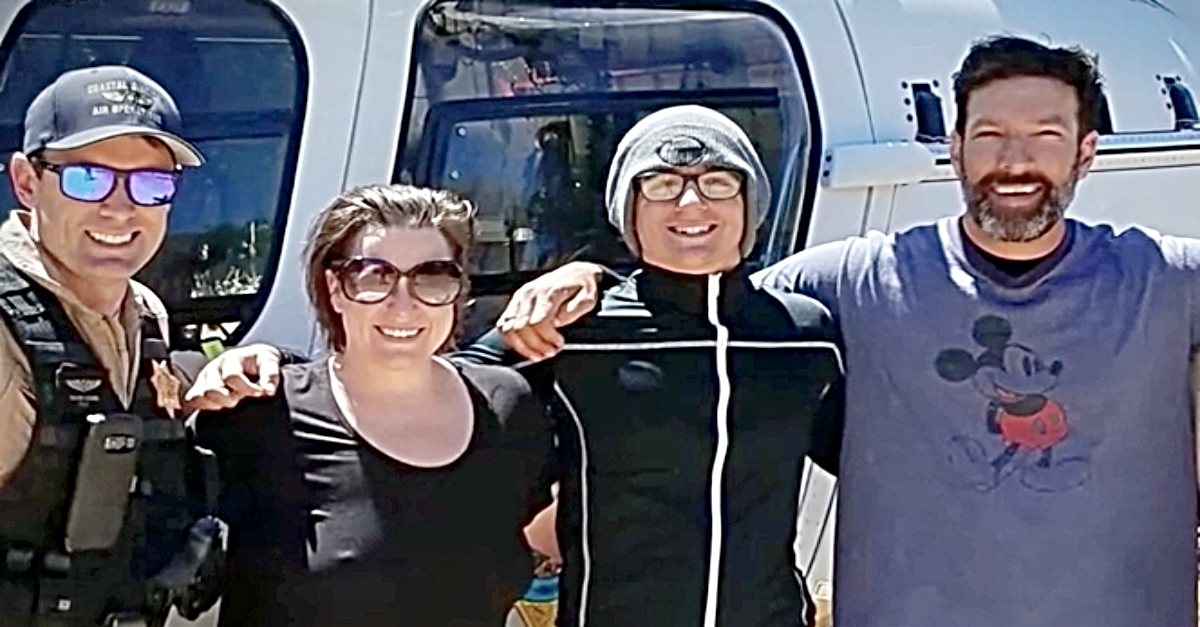 The family was told to stay put and stay warm until a rescue crew was sent early the next morning to get them out of their predicament. The next morning, a second California Highway Patrol helicopter crew arrived at 10 a.m.

One by one Curtis, his son and his girlfriend were airlifted by helicopters off the cliff. Whitson still gets emotional recalling the rescue and his gratitude for both the crew members and their families. 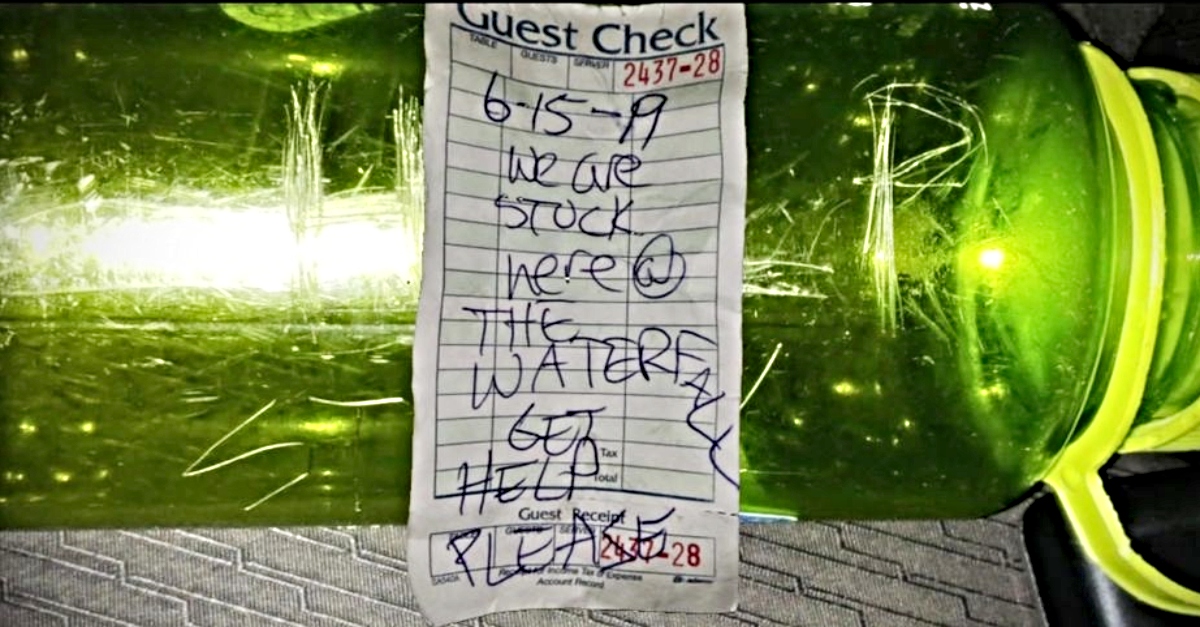 Curtis was told about the hikers who turned in the water bottle but was informed that the couple left before the rescue commenced without giving their names.

Curtis wants nothing more than finding the two hikers who found his family’s message and saved them from what could have turned a pleasant family outing into a real disaster. 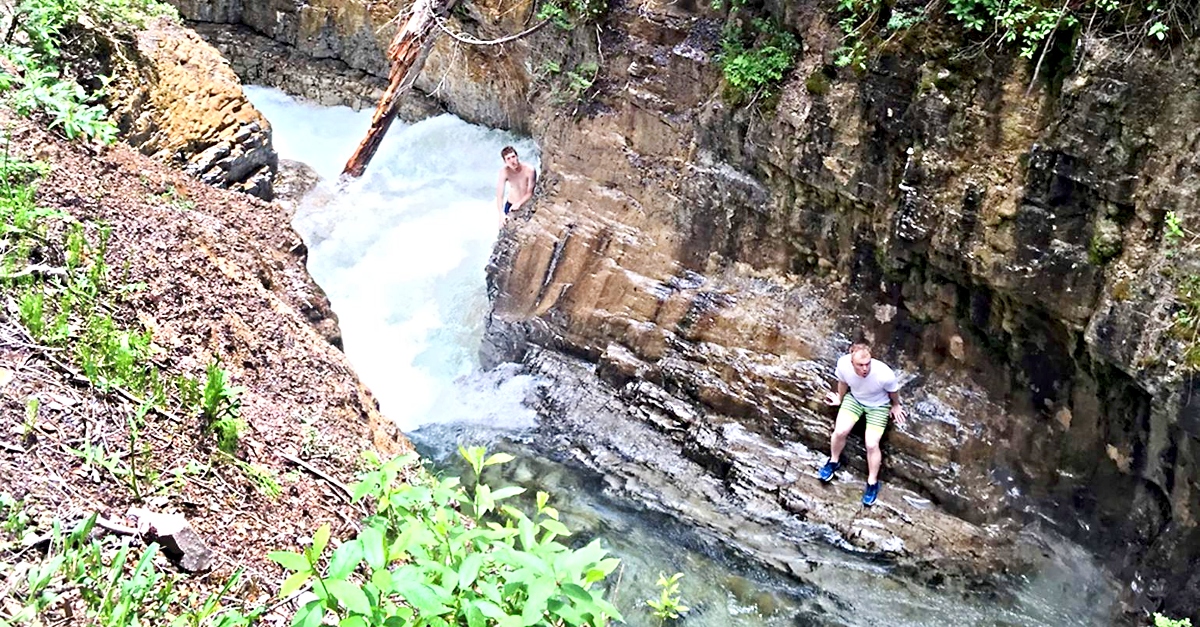 Curtis was blown away about how things turned out and how the community reached out so quickly to help someone in need. Things could have turned out differently because it could have been days before anyone spotted the bottle with the message… or even retrieve it from the stream for that matter!

Seems like their prayers were truly answered and someone was looking out for them.

Stuff Movies Are Made Of 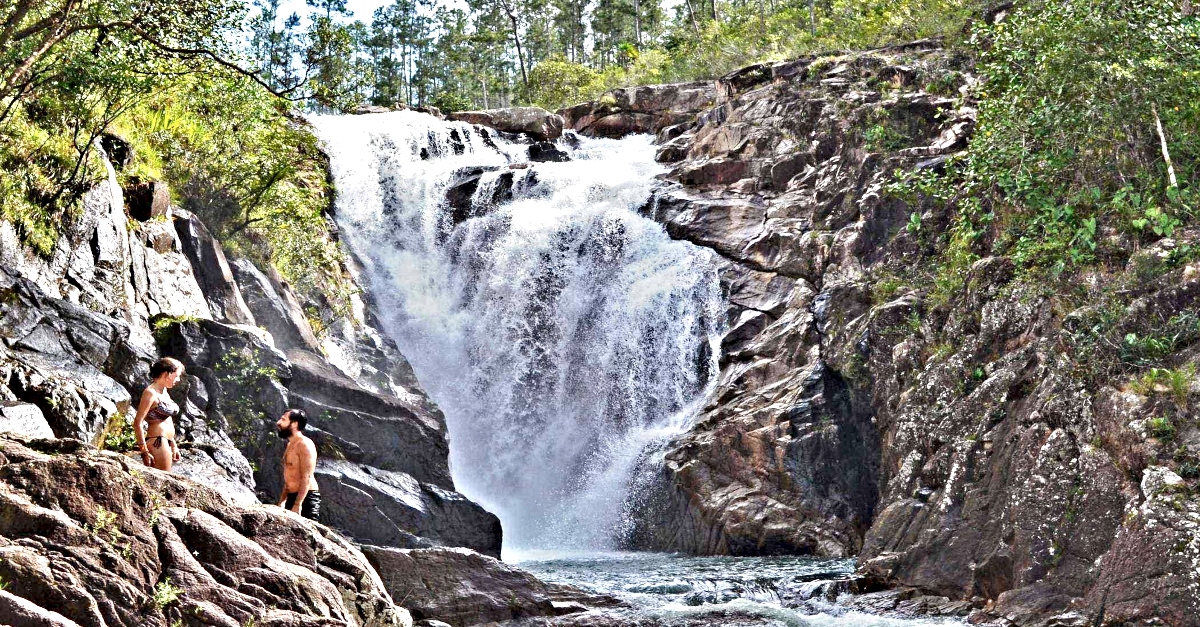 The pilot, Joe Kingman said of the incident: “A lot of pieces fell into place just right for these folks,” Kingman said, adding that in 23 years of rescues he had never heard of a message in a bottle prompting a rescue.

“Stuff like that only happens in the movies really,” Hunter said. “Seeing like an actual message in a bottle being the reason someone actually got saved is just mind-blowing to me.” 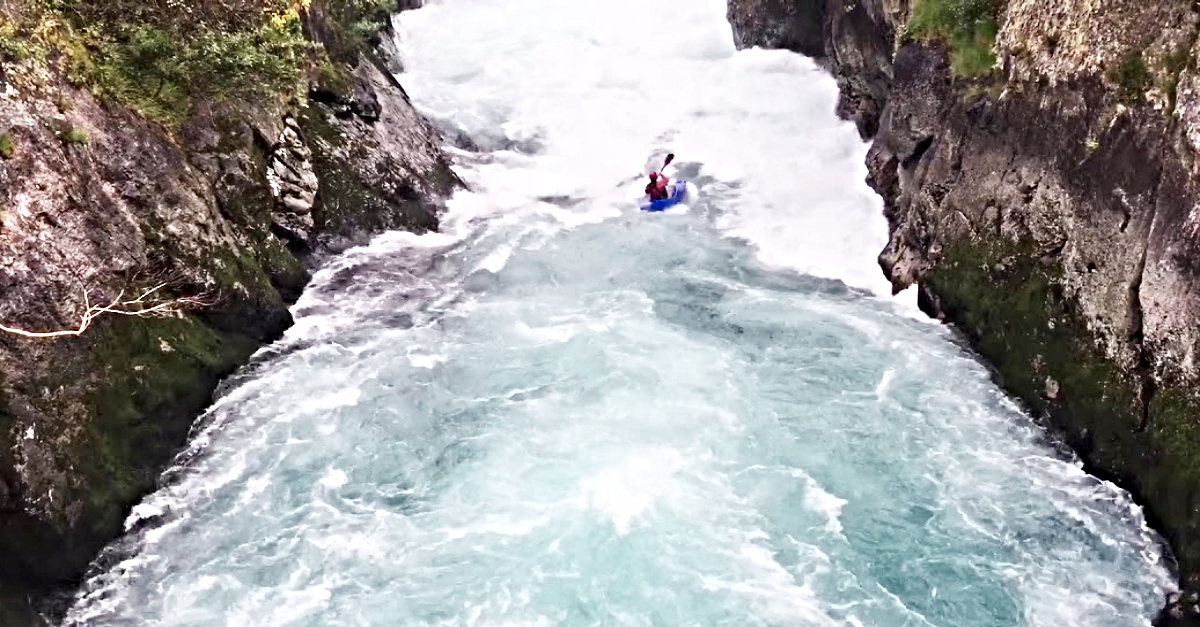 What started out as a pleasant family outing out in nature could have turned into a nasty ending.

However, with a stable sense of mind and composure, the whole incident turned into a message of hope that there is always hope and light at the end of the tunnel. 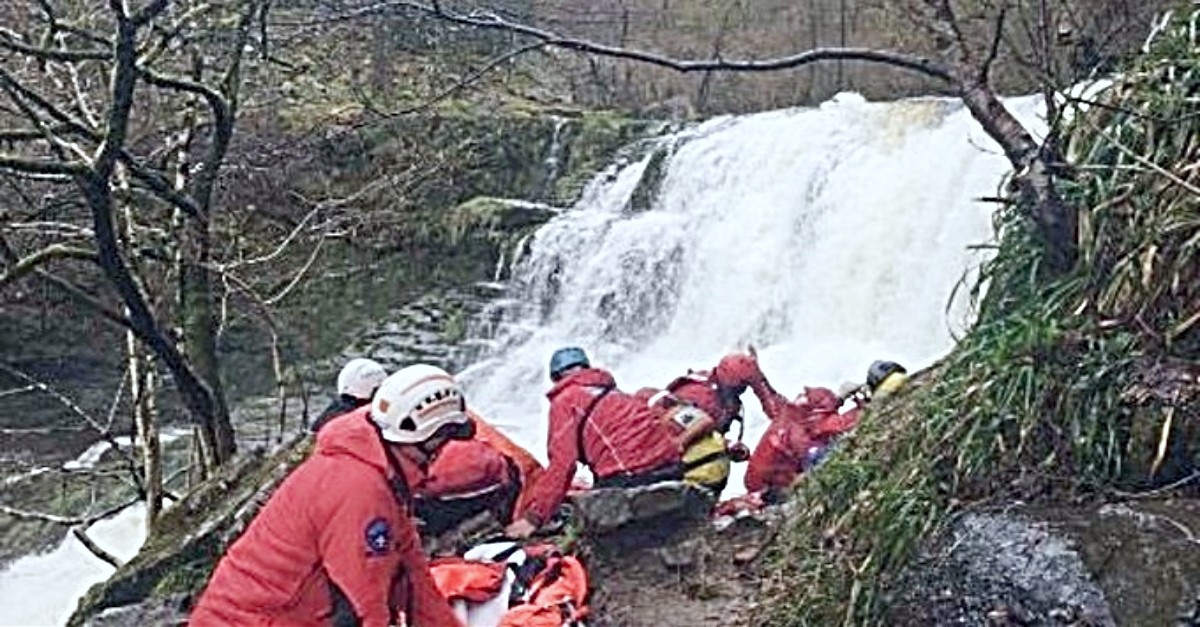 One thing that seems to be a certainty is that Curtis will not be doing that particular hike without taking some rope with him in case he is presented with his accustomed lifeline not being there for him when he needs it.

It is true that this adventure brought the family closer as everybody had to be strong for one another, and it turned out to have been a family celebration instead of a father’s Day one. 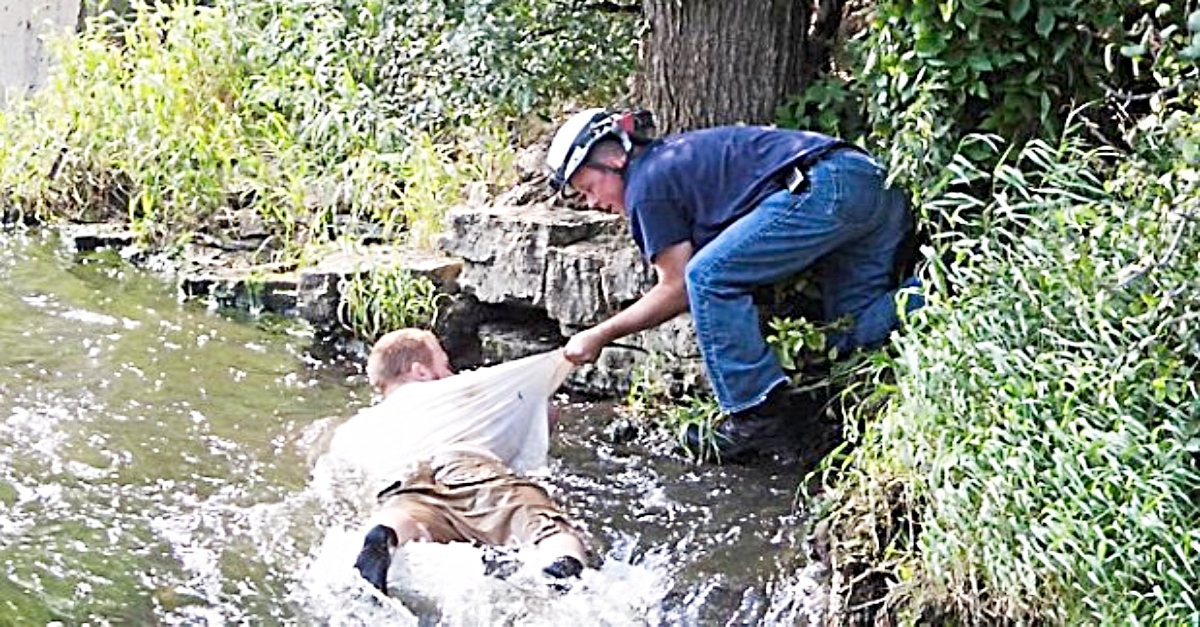 On a bright note, Nalgene got a feather in their cap and was very proud of the durability of their product. An employee of 15 years with the company states that he has seen a lot of uses for their product but nothing quite like this. You put a cap on it with a message inside, toss it down a river and get the message out.

Although it was not was it was developed for, but he was happy to have been of service to someone in distress. About a week after their rescue, as they were still processing their adventure and unlikely rescue, Ramirez bought her boyfriend Curtis Whitson a gift: a new Nalgene bottle. Inside, she tucked a love note, confident he would find it.