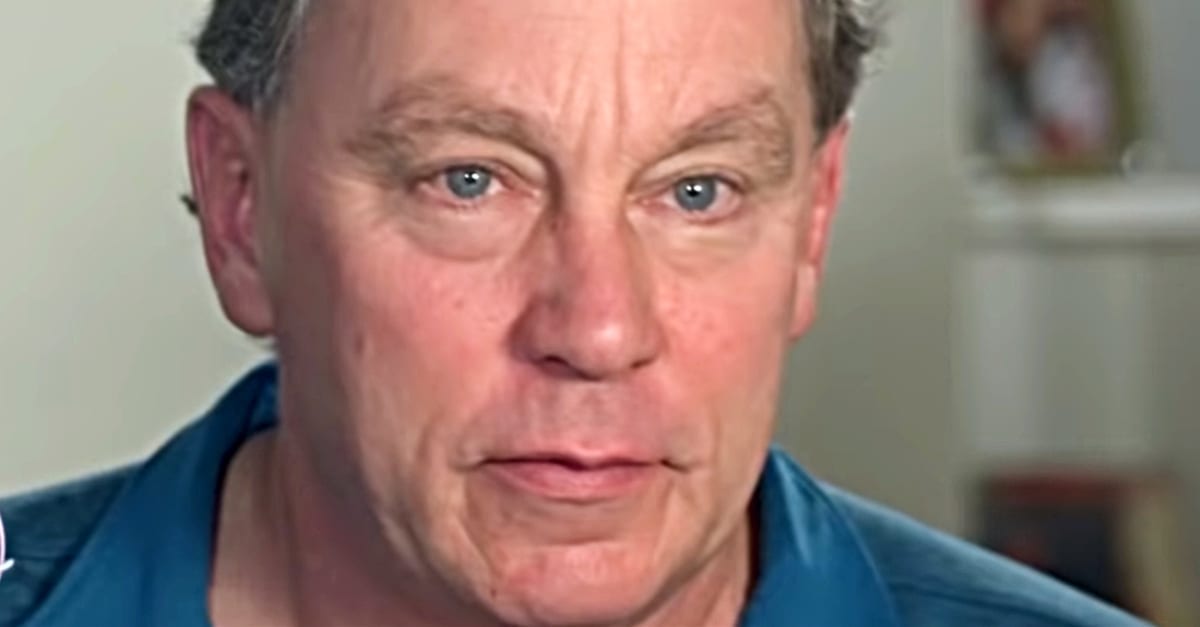 When Paul Russell was checking in on a relative’s home, he never thought he’d be walking into a scene out of the movies. In fact, Paul said what he encountered was straight from the movie Alien.

With his heart thumping, he shone the flashlight into the bedroom — illuminating the creature darting out from under the bed. But before he could see what it was, it scuttled down into the cellar with a low growl. 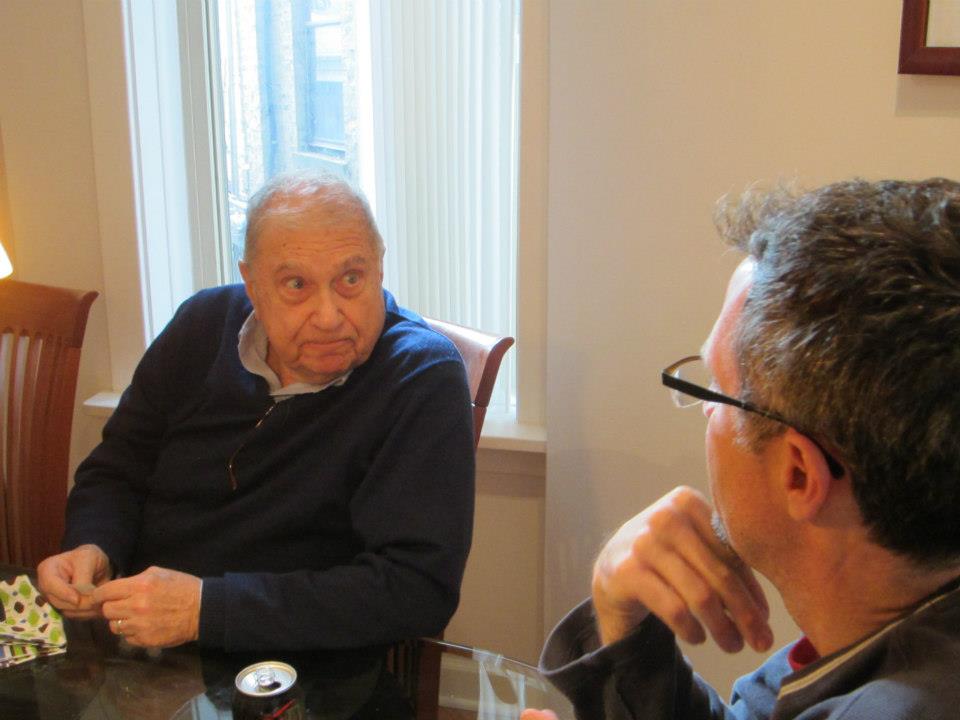 At 82 years-old, Paul Russell’s distant relative had just moved out of his Pittsburgh, Pennsylvania home. The man had been living on his own until a mysterious illness made it impossible for him to take care of himself.

To better keep an eye on him, his family moved him to a nursing home that was closer to their place. While this was clearly the best thing for the man, little did his family know, moving him out would set off a chain of events too weird to imagine. 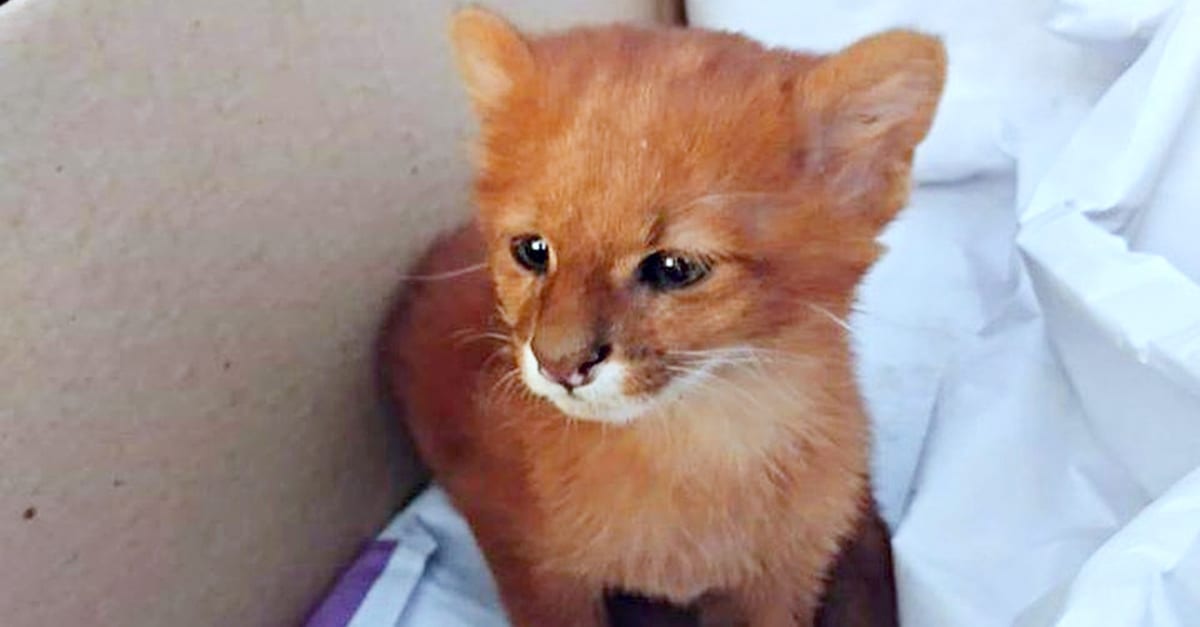 Controversially, the nursing home did not permit any animals on the premises. Sadly that meant Siam, the man’s beloved 17-year-old cat, had to be left behind. This is where Paul jumped at the opportunity to help.

Paul and his wife, self-described animal lovers, already had a few cats. So what’s one more? Well, as Paul was soon to find out, Siam wasn’t the only “animal” in that house. 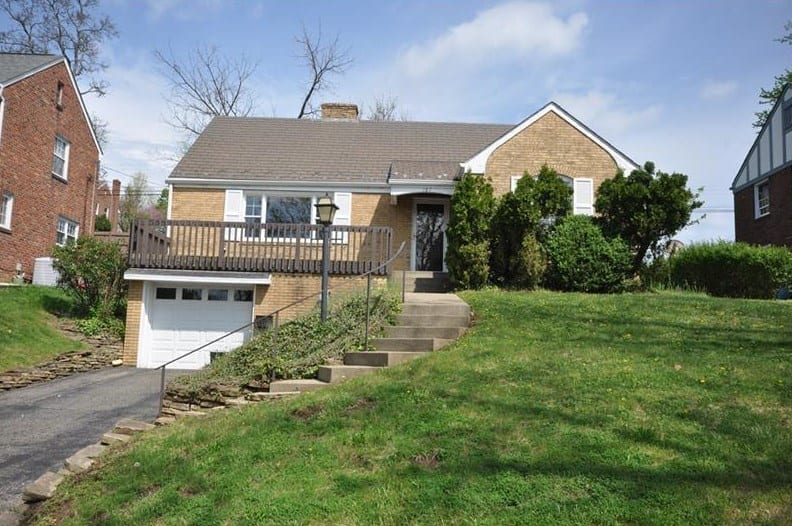 Paul walked up the drive, opened the front door, and flicked the light switch on and off. Nothing. He’d have to go down into the cellar and find the breaker… but first things first.

He went back to his car and fetched his emergency flashlight. But when he shone the beam into the hallway, he almost dropped it. 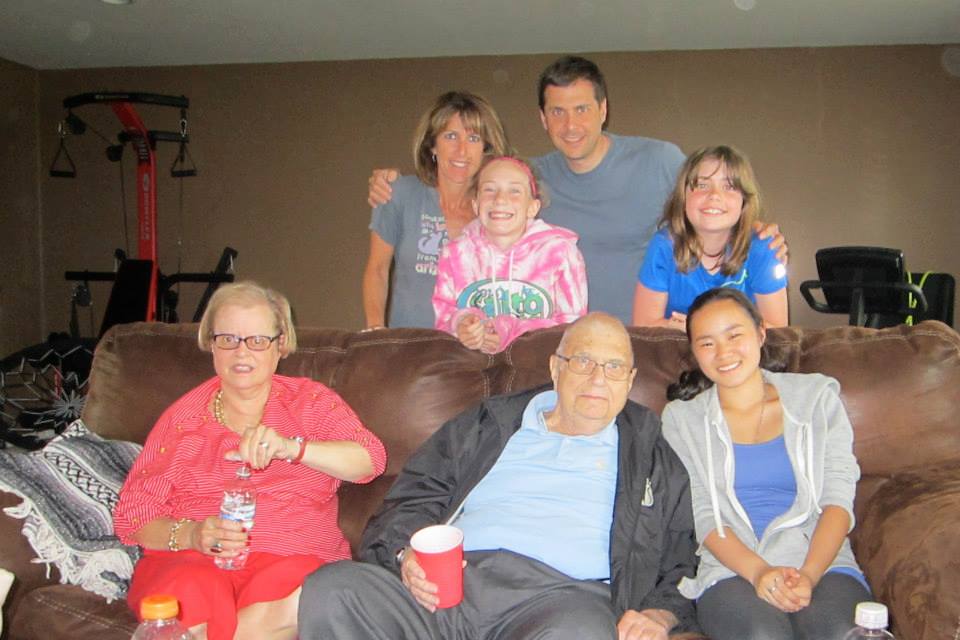 The smell hit him first, then the sight in the hallway left Paul reeling. The entire house was stacked from floor to ceiling with trash. Broken furniture, boxes, and newspapers lay in heaps and dishes piled up high on every surface.

The windows were blacked out, and, stranger still, there were weird markings all over the walls. 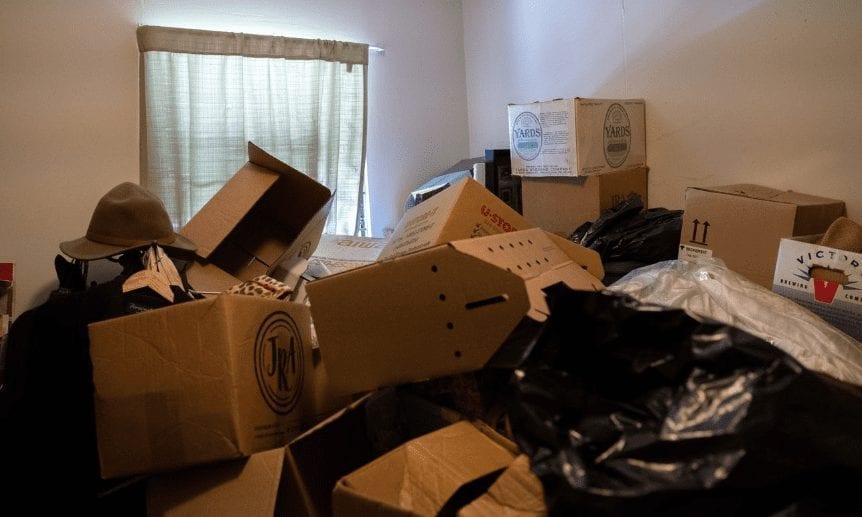 As Paul moved slowly through the house, he couldn’t shake the feeling that he was being watched. He tried to stop thinking about rats, snakes, and worse.

The hair prickled on the back of his neck as he shone the flashlight’s beam over the etchings on the walls. Who, or what, had done this? And where was Siam? 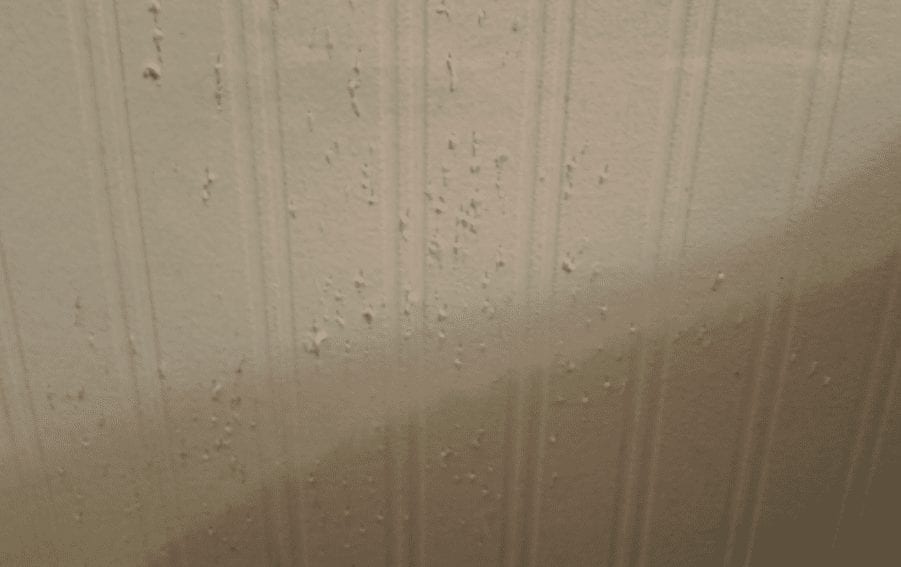 Paul inspected the marks on the walls and realized that they were scratches that had been gouged into the wallpaper. What had happened here?

He walked down the hallway with his heart in his throat. “Kitty, kitty,” he called softly. A strange feeling came over him and, suddenly, all his nerves were screaming at him to run. He had to find Siam as quickly as possible so he could get out of there.

Hiding In The Dark 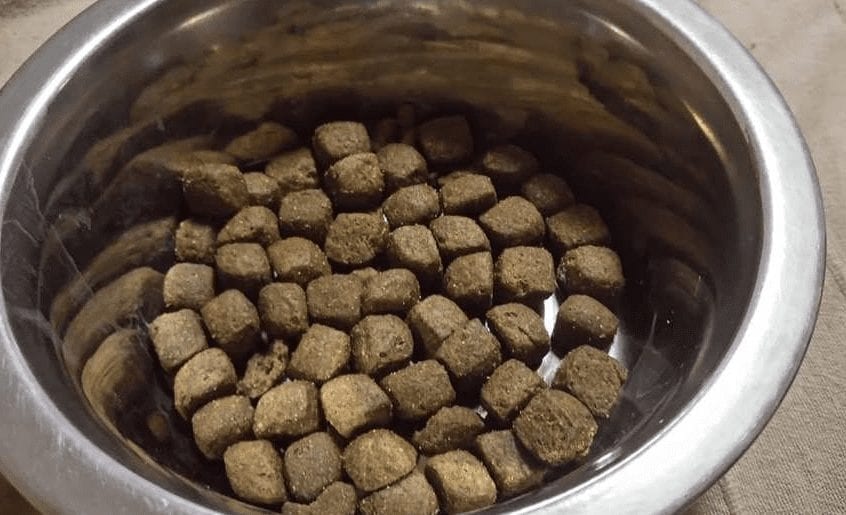 Paul walked into the kitchen and located Siam’s food bowl. He filled it with the cat food he had brought with him, but strangely, Siam didn’t come running. After calling his name for several minutes, his heart sank.

If Siam was hiding, he’d never find him in the dark — there were too many hiding places. He knew he’d have to go down to the cellar and flip the breaker switch. But before he had even reached the darkened stairway, he heard a sound that chilled him to the core. 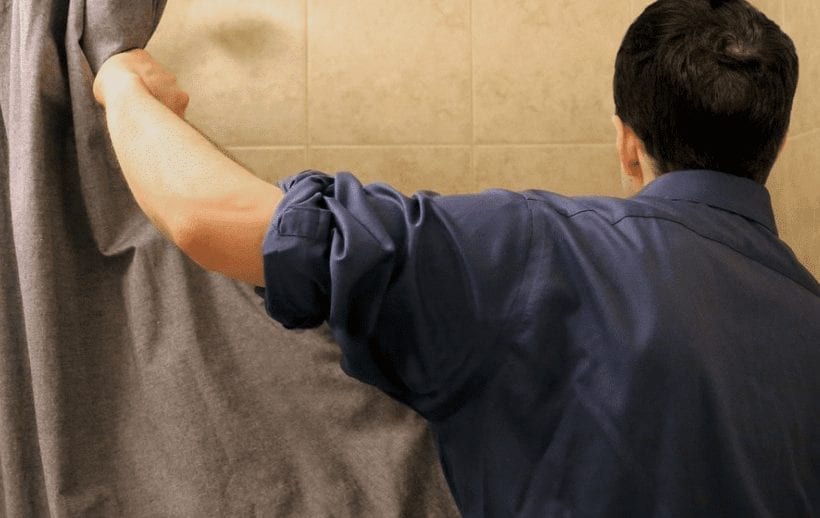 A screech echoed through the house and Paul froze. Then, he heard a thump, but this time the noise came from another room — the bathroom at the end of the hallway.

Willing his legs to move, he slowly approached the door, shaking. He pushed it door open with his foot and yanked back the shower curtain. 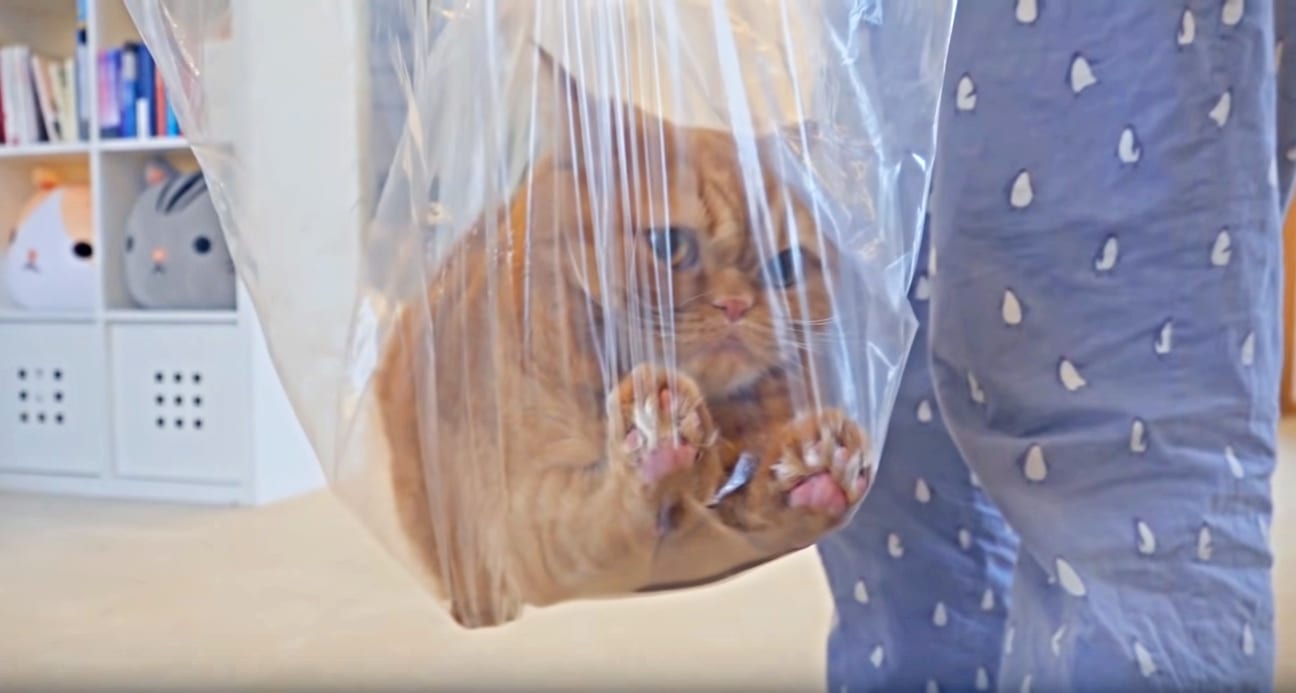 To his relief, there was Siam — camped out in the bathroom tub. The little guy was scared and ravenously hungry. Who knows when he last had a decent meal.

Paul began thinking about what he was going to do with Siam, then he heard another sound coming from the darkness that made his blood run cold. 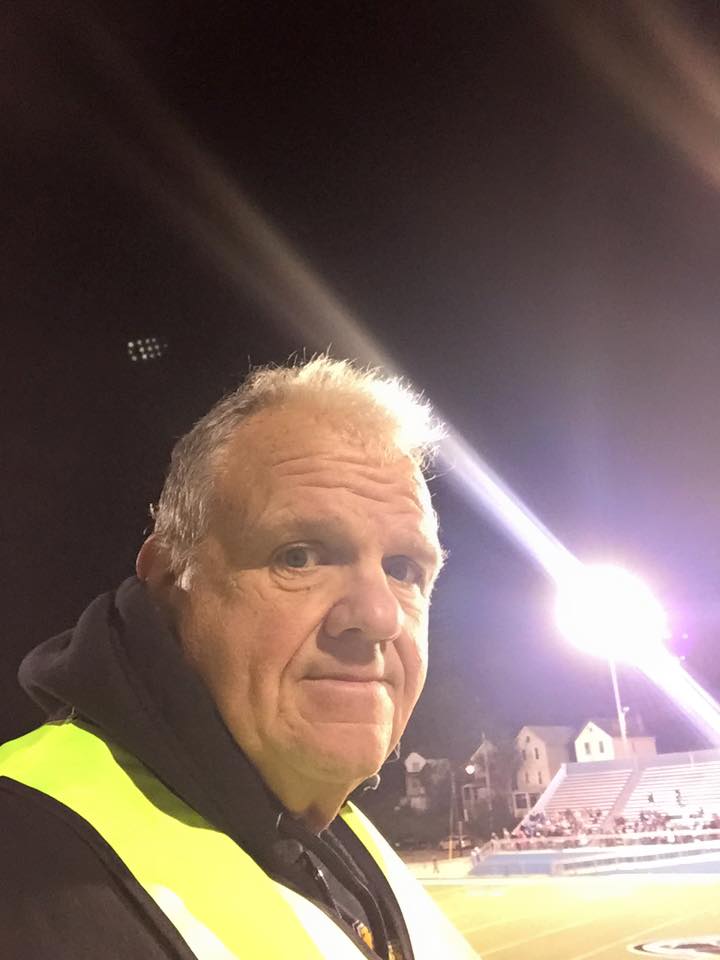 Paul heard a low scratchy growl, echoing from the room across the hall. But if the cat was in here with him, then what was out there making that sound? At first, he reassured himself that it was probably just a scared raccoon that made its way into the abandoned house — that would explain why Siam was hunkered down in the tub, right?

He crept over to the doorway and was met with a sight he’ll never forget. 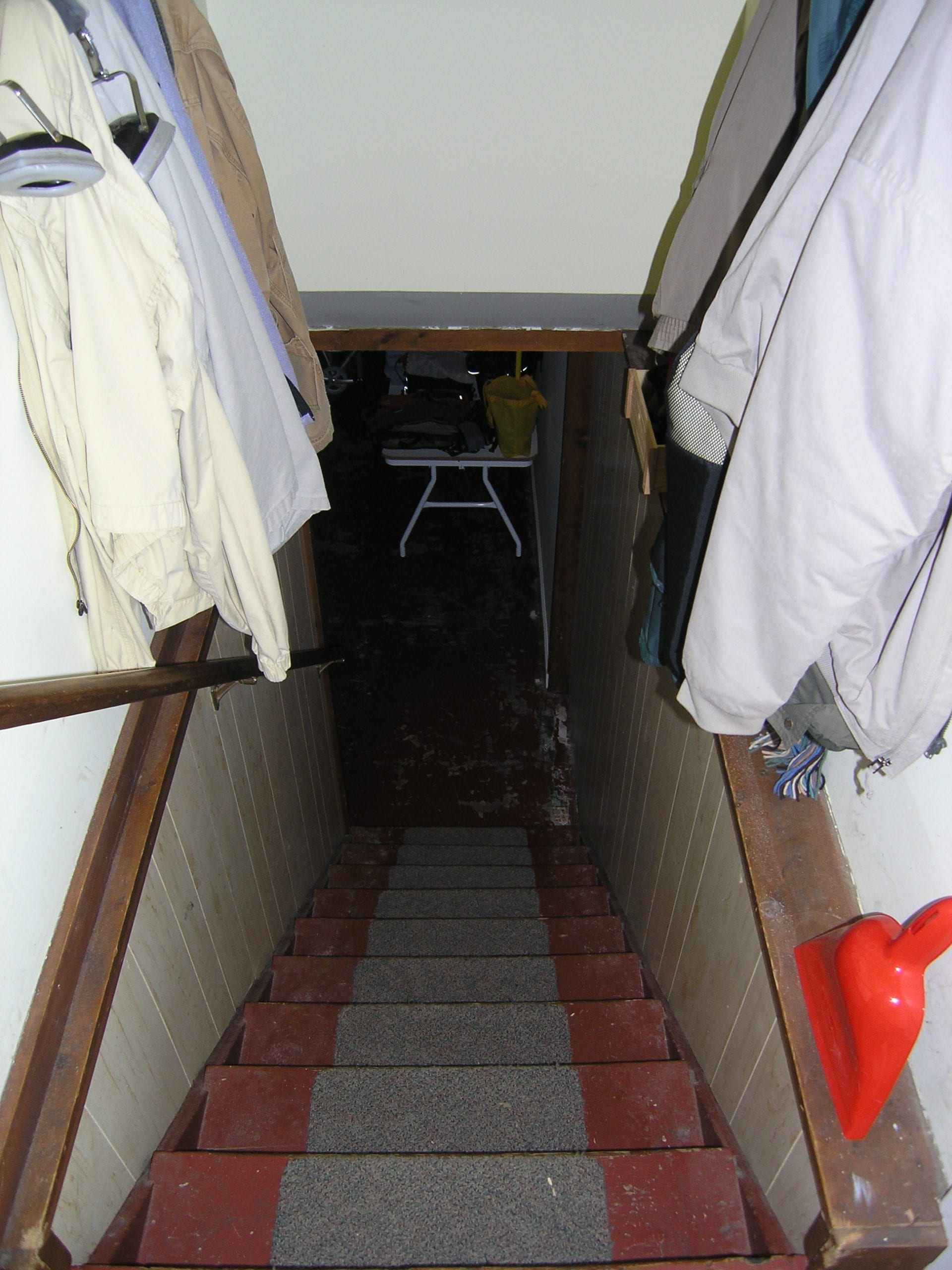 While most of us would probably just take Siam and run, Paul’s curiously got the best of him. “I started searching around, and suddenly this huge creature darts out from under the bed and runs down to the cellar, and I thought, ‘What was that?’”

Terrified, Paul dashed straight out of the house. He’d need to muster every ounce of courage he had before going back down into that cellar. 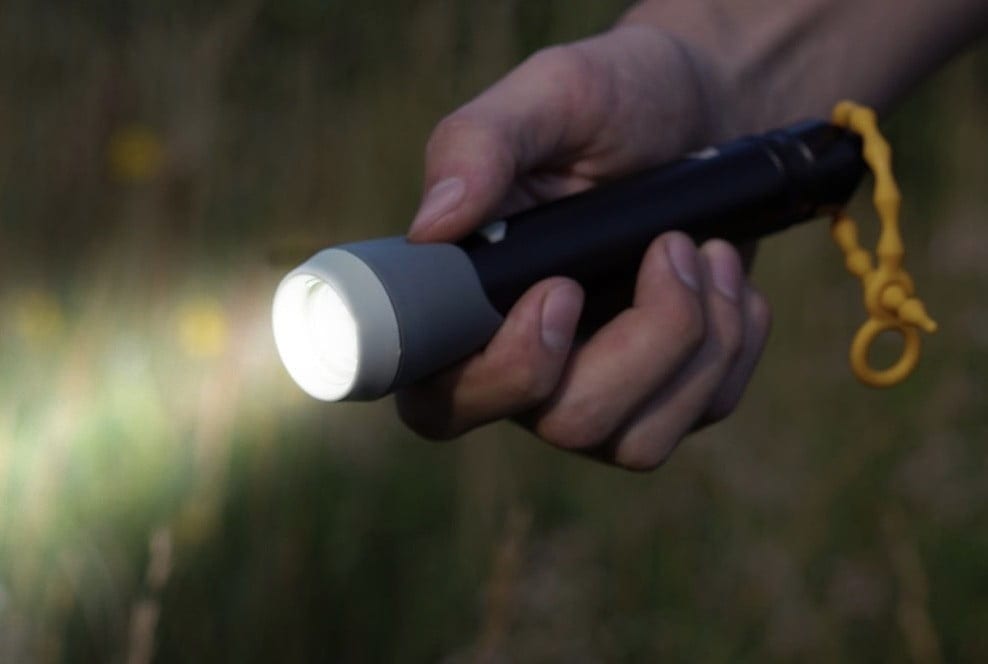 Now with his wife, Jill, by his side, they entered the house again. This time, Paul was prepared. Armed with a trap and flashlights, they crept down the stairs. Then, they spotted it.

“The next day, I went into the creepy old cellar… I’m down there with a flashlight looking — it was almost like a horror movie. And I found her hunkering in the corner…” Paul recalls. 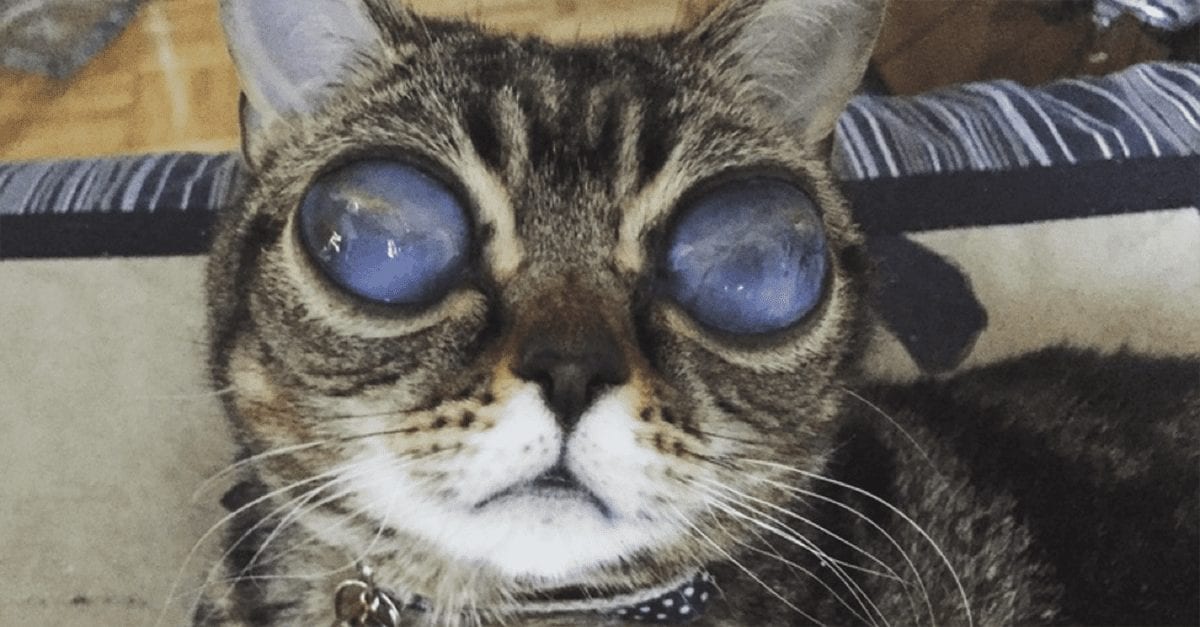 They managed to corner the creature and push it into the trap. Jill stood back, incredulous. She hadn’t believed her husband when he had said that the creature looked dusty and appeared to have huge glowing eyes, but now she had seen it for herself. Just what had they found?

They rushed the alien-looking creature to the vet, hoping for some answers. 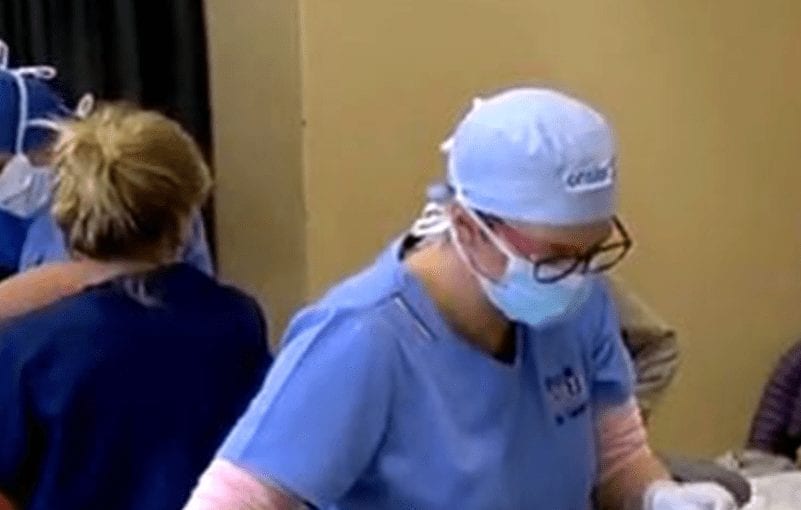 At the vet, Paul and Jill were shaken. What could this animal be? Paul speculated that perhaps it was a wild animal he’d never heard of — or a common animal that looked like nothing he had ever seen.

The vets had never seen anything like this before, either. But they did know what it was. 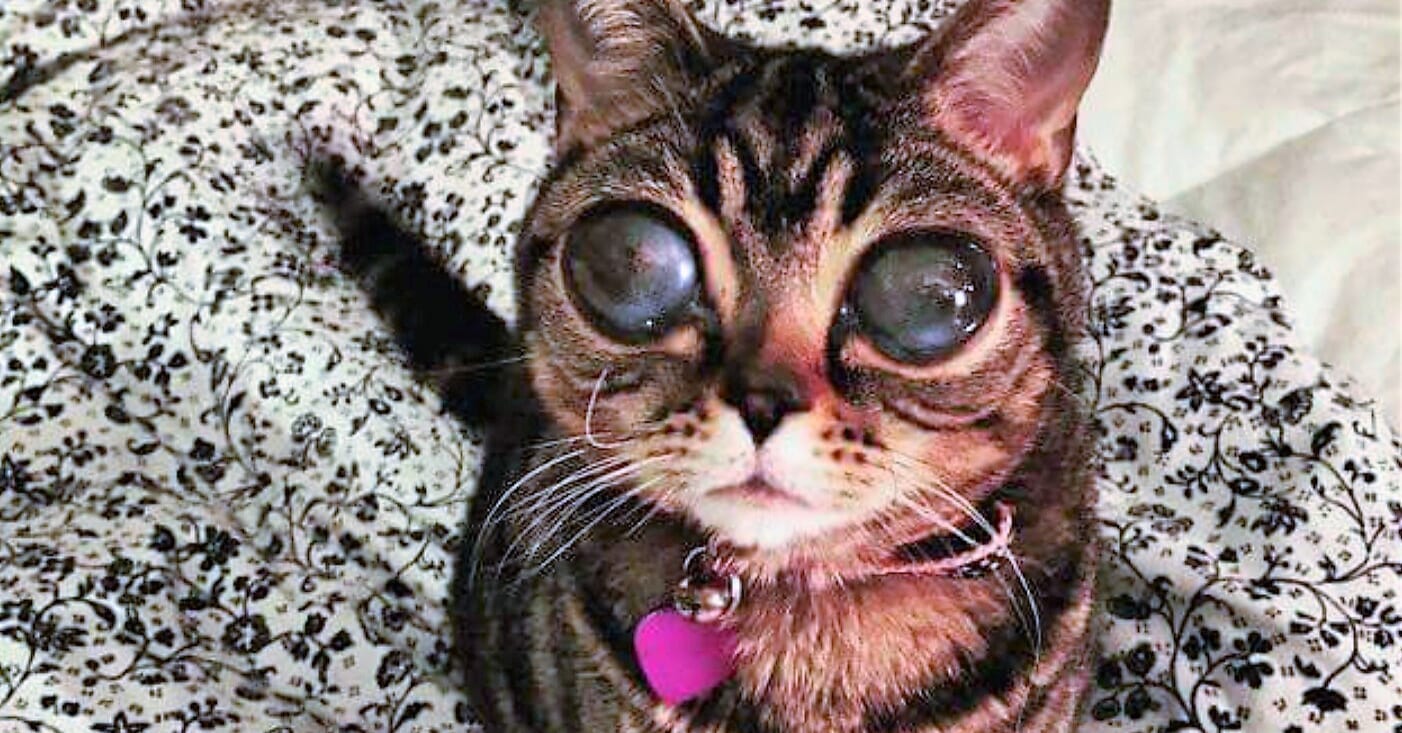 What they were looking at was a cat! But what had caused it to transform beyond recognition?

After a series of discussions about what the next move should be, the vets eventually came to a decision that the only sensible thing they could do was give the creature anesthesia. 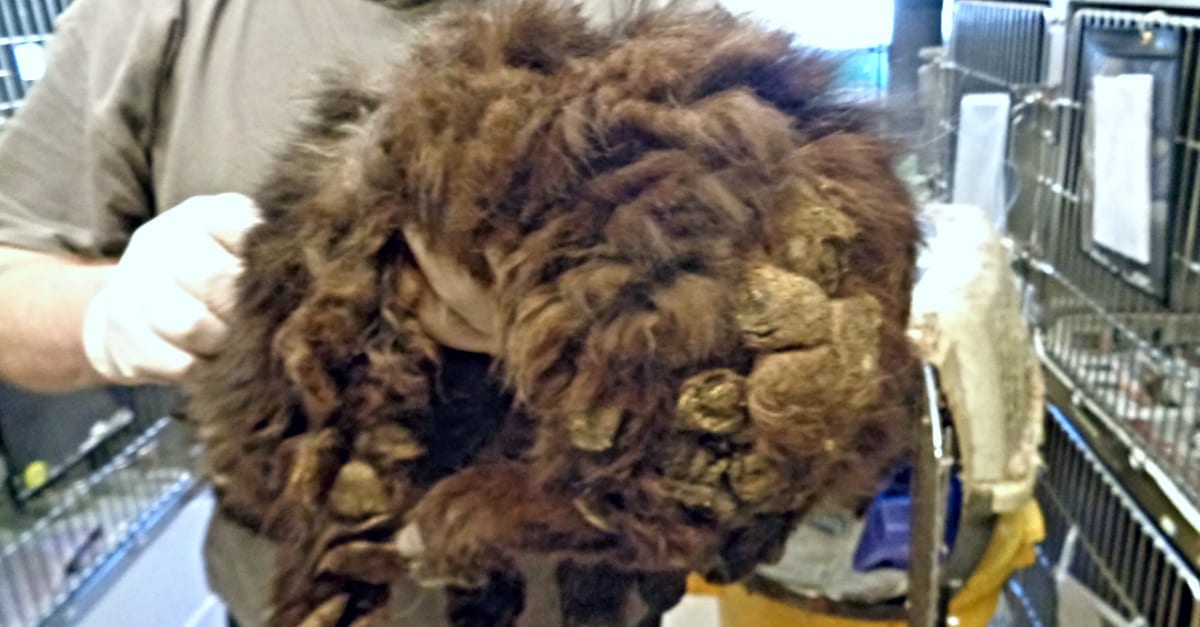 The cat, aptly named Hidey due to its affinity for hiding, was also trapped under pounds and pounds of its own matted fur. Sadly, its 82-year-old owner had completely forgotten about Hidey for a very, very long time.

“Hidey was really overweight, so that makes it harder for [cats] to groom themselves, and that’s when you see matting happen,” Western PA Humane Society Senior Marketing Communications Manager Caitlin Lasky said. But how could they safely remove the cat’s “dreadlocks?” 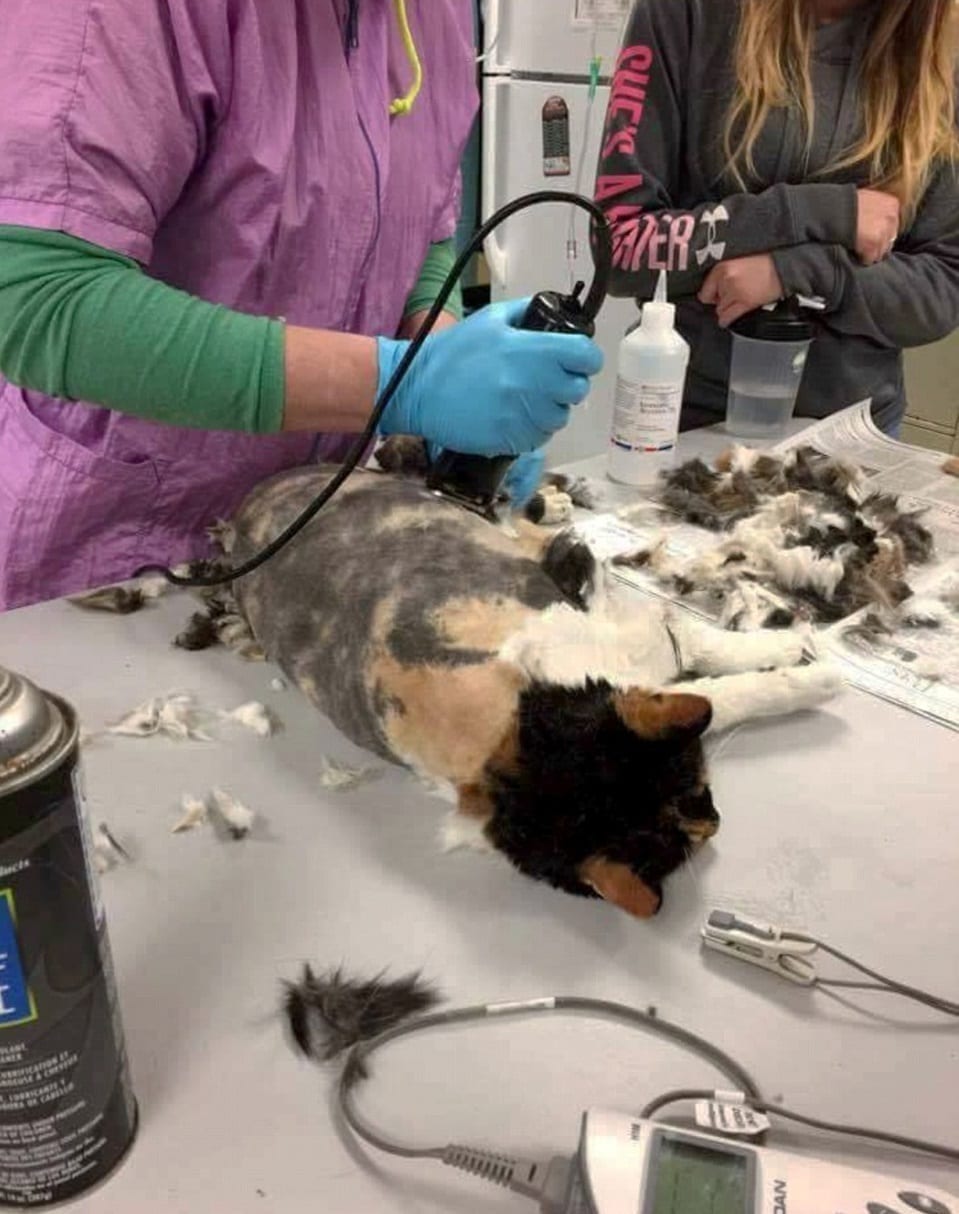 The vet team was stunned at Hidey’s appearance. “They hadn’t seen anything like that,” Caitlin Lasky, senior marketing communications manager for Western PA Humane Society, said. “Even looking online, I had a hard time finding anything similar, so it’s definitely a unique case.”

There really is the only way to rescue a cat in this condition: you have to shave it all off. But the team couldn’t afford to make any mistakes. After putting Hidey under general anesthesia, they carefully began cutting away at the mass. 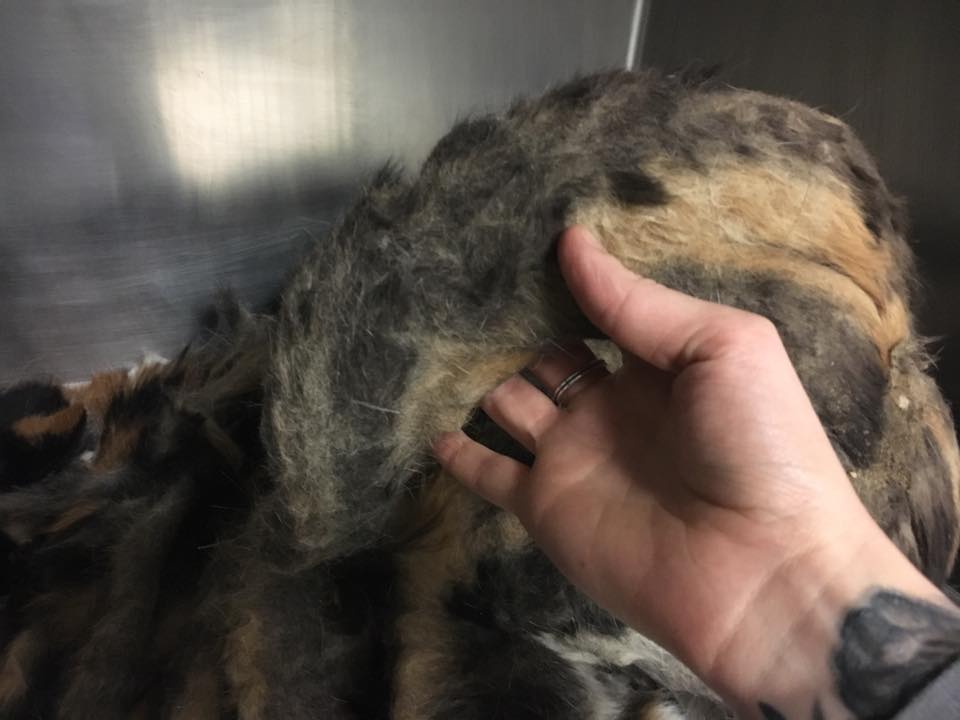 “Our Medical team shaved off the pounds of intertwined fur from her body and, needless to say, this cat is feeling so much better now!” read the shelter’s Facebook post. The fur had accumulated up to two pounds in weight!

“Lots of fur. It had to be years of matting for it to get that long.” In fact, Hidey turned out to be not just the hairiest cat in history but also one of the fattest. And now Hidey had an even bigger problem: she had no place to call home. 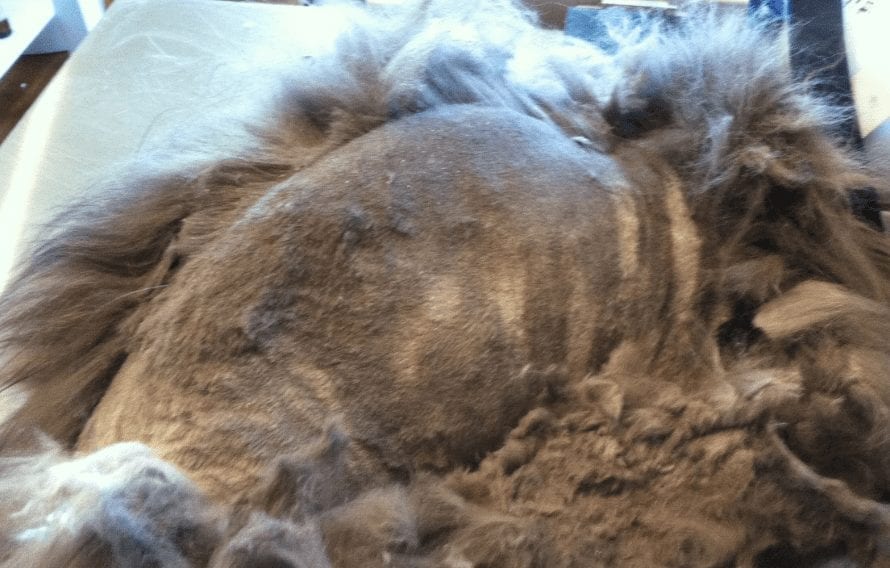 Thankfully, after Hidey was discharged from the vet hospital, Paul and his wife decided to take both Hidey and Siam in. Both felines now have a forever home with the Russells, and instant siblings in the couple’s three other cats and two dogs.

It will take more time to see who Hidey really is, but she’s slowly adjusting to life without pounds of overgrown fur. She may not realize it yet, but she finally has a chance at a happy and healthy life! But could Hidey ever trust humans again?

Monster Under The Bed 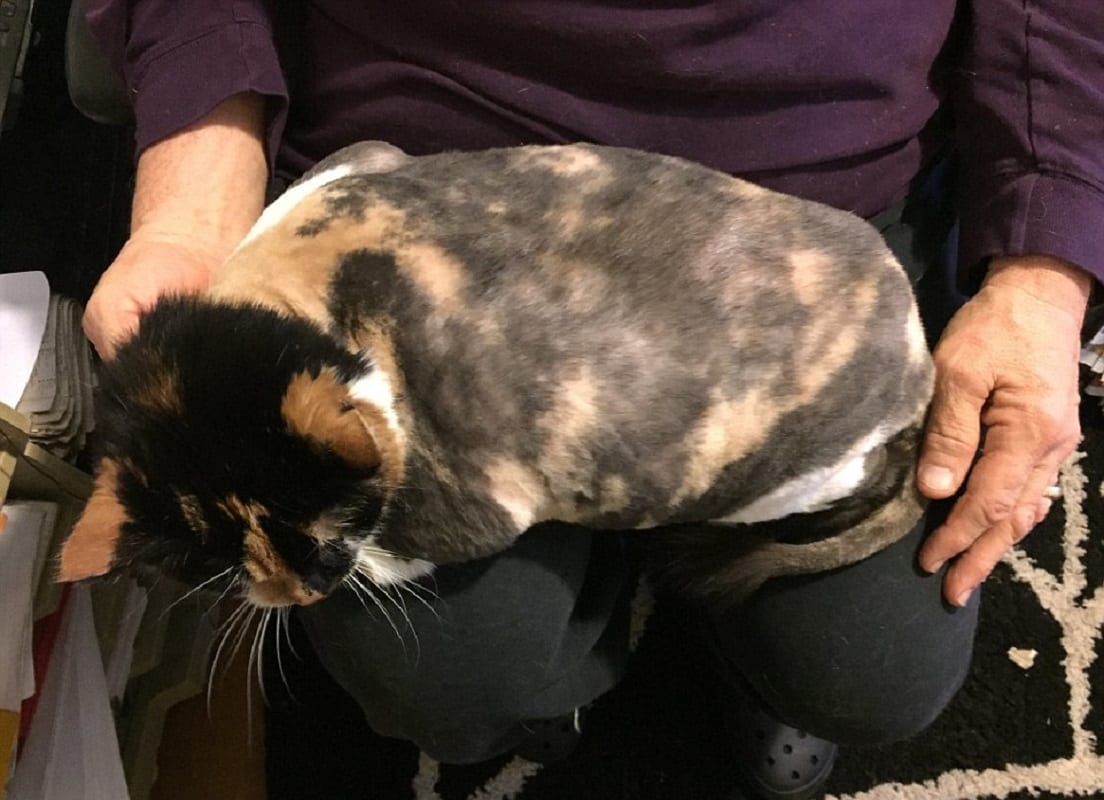 After years of neglect, it’s clearly going to take some time for her to settle in. “She’s been hiding under the bed for the last couple of days,” Russell said.

“I’ve been dragging her out, and holding her, and she purrs a lot. The last couple of days, she’s climbed out from under the bed on her own and into a cat bed I have. So she’s starting to work her way to see people more.” 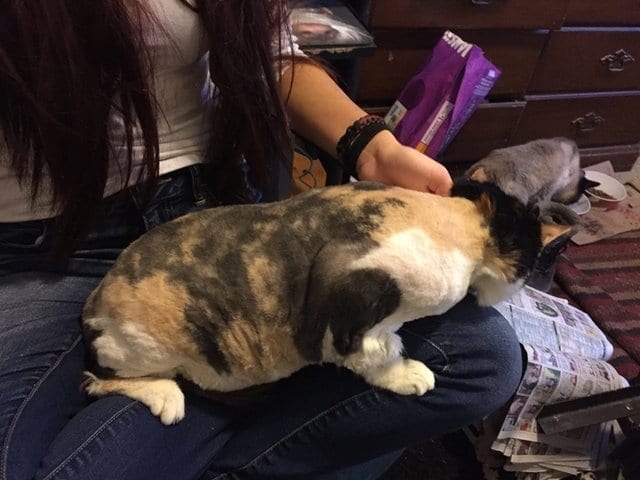 “The companionship of a pet can bring many positive benefits to the elderly, however, owning a pet is a large responsibility,” said Dan Rossi, CEO of the Animal Rescue League Shelter and the Western PA Humane Society.

And he also has a warning, as well as some simple advice on what to do in this situation.

Looking Out For Each Other 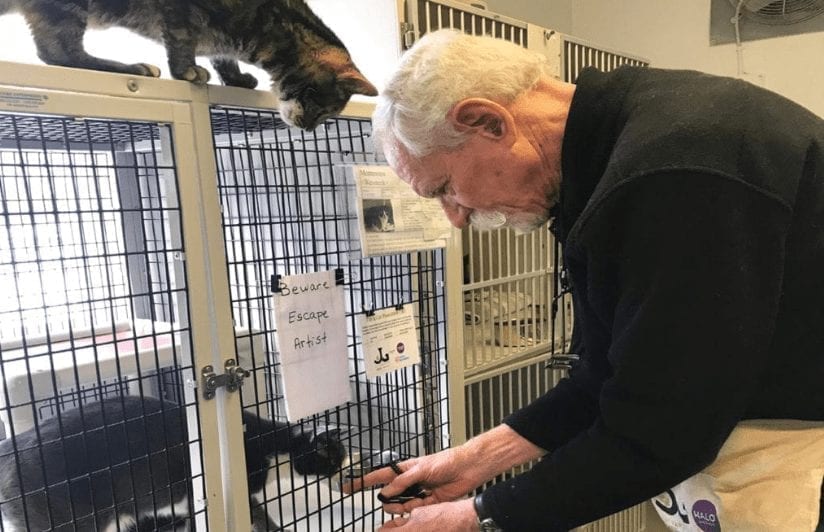 “If a family member, friend or neighbor owns a pet, please help them to make sure there is a support system in place if/when mental faculties begin diminishing,” Dan pleads.

“Also, open door shelters such as Animal Rescue League Shelter and the Western PA Humane Society do not turn any animal away if there are no other options for the pet.” 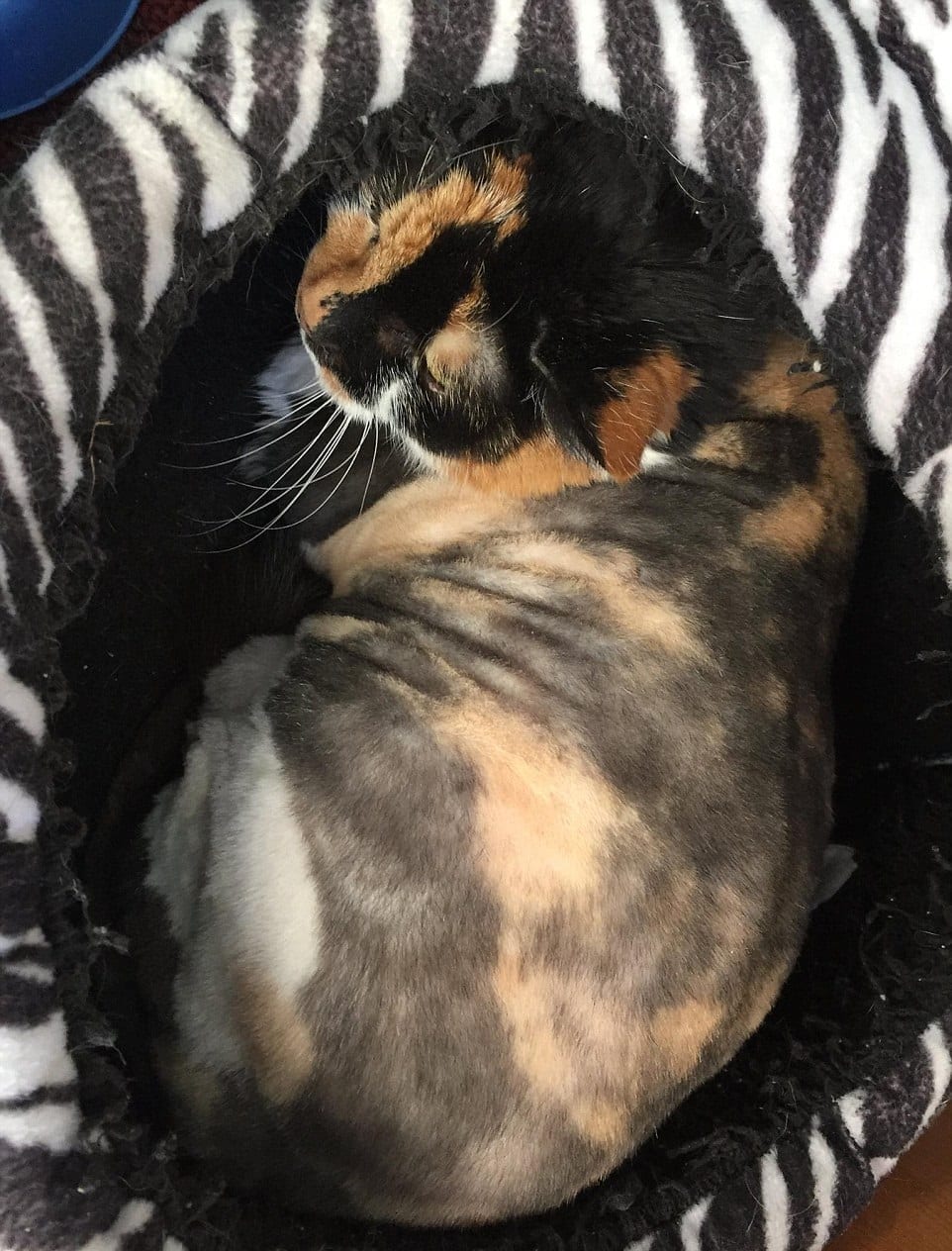 It will take more time to see who Hidey really is, but she’s slowly adjusting to life without pounds of overgrown fur and starting to come out of her shell. “Other than being standoffish, you hold her and she starts purring,” Russell adds.

However, Jill thinks there’s much more in store for Hidey in 2018… 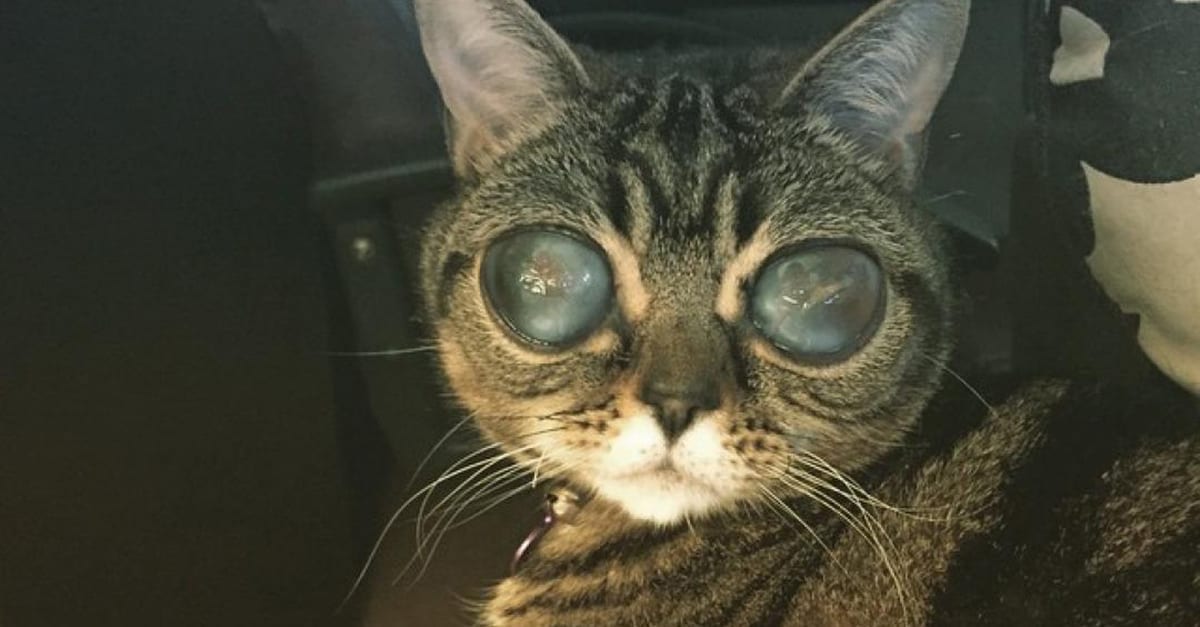 “In six months she’ll be running the house,” Jill says. “And hopefully she’ll be a little trimmer.” Thank goodness someone had finally realized that Hidey was suffering under all those pounds of fur and had taken her in for professional care.

Hopefully, this story will help prevent other incidents of accidental pet neglect among the elderly.