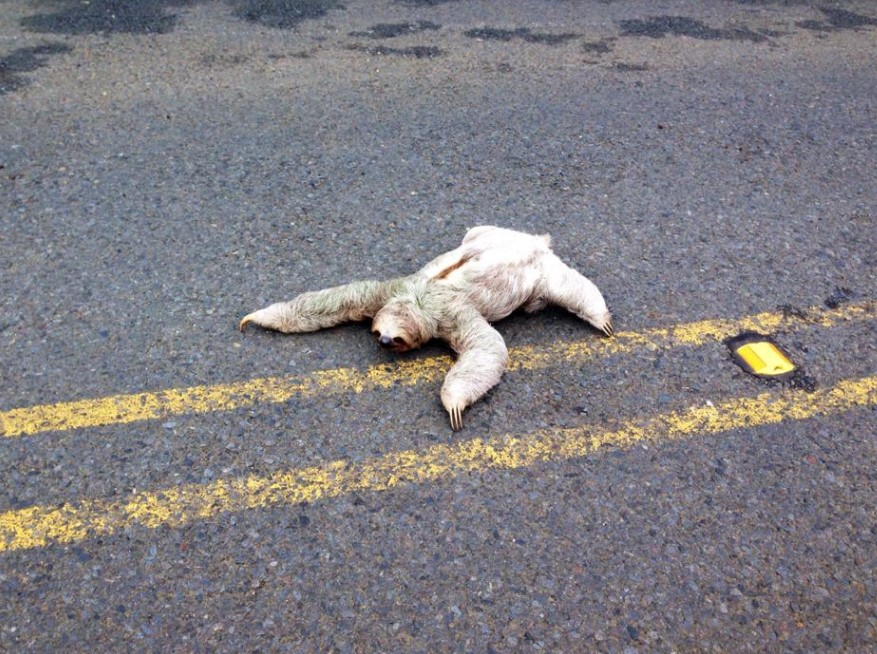 He had no idea what to do, but he knew he had to try. So he decided to act in the only way he knew how — on pure instinct. He just hoped that it would pay off.

Encounters with wildlife weren’t unusual here, but he never dreamed of an animal encounter like this. Looking at his friend’s face, he could tell that he had never been in a situation like this before either. Nevertheless, they had to do something — and they had to do it fast. 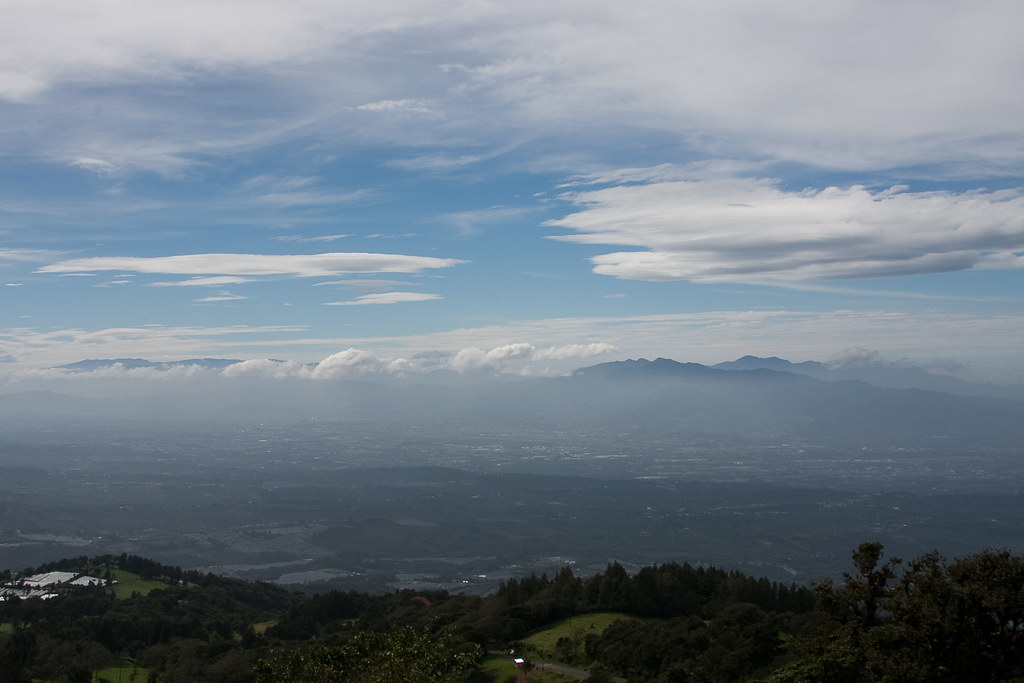 Costa Rica is a paradisiac retreat. It is one of the most biodiverse countries in the world. When Charles was visiting the country, he was blown away by the accessibility of that lush, wild environment — to the residents and visitors alike.

He had heard that Costa Rica contains about 5% of the world’s species, but he didn’t know that he would be encountering one very soon.

An Object In The Road 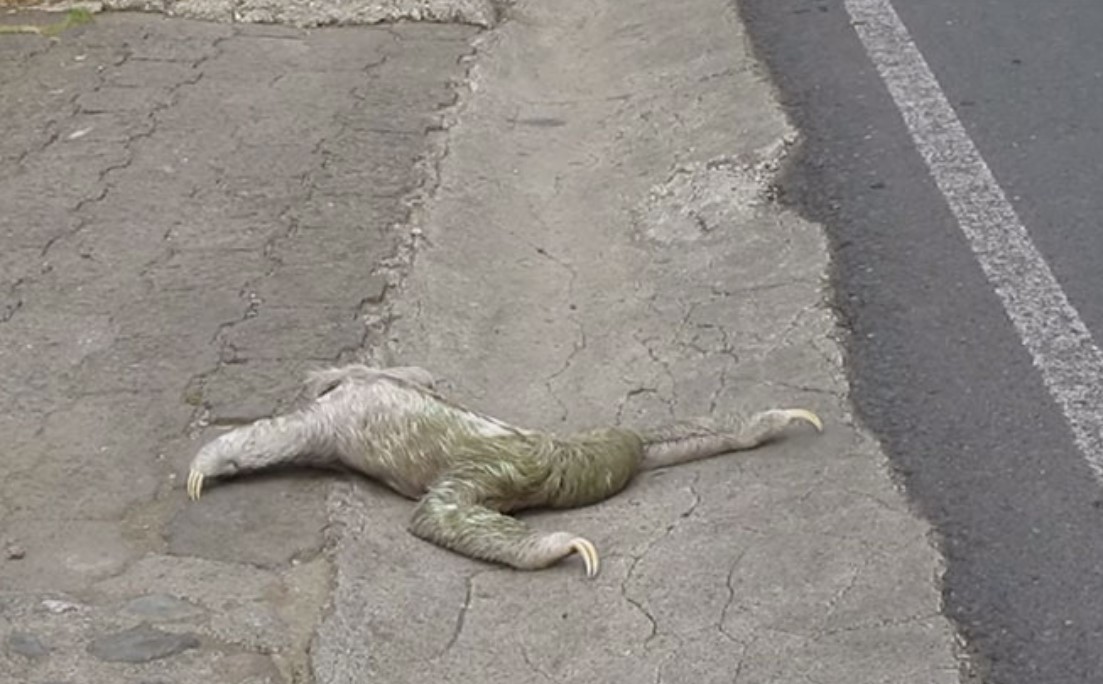 Just seconds before, our man had been sitting comfortably behind the wheel of his car. Renting a car gave him more freedom to go wherever he wanted. The windows were down. The wind was blowing in his face. He was bobbing his head along with the songs on the radio.

All was fine and dandy until he noticed a dark spot on the ground. Was it a pothole? He thought, slowing down slightly. Suddenly, Charles slammed on the breaks. 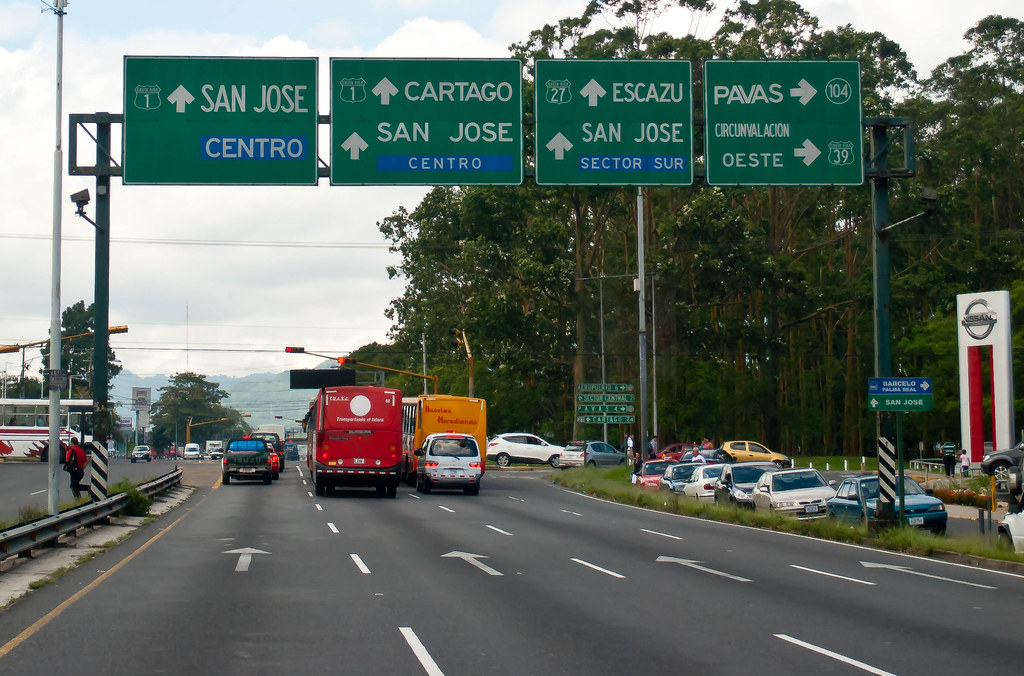 “What did you stop for?” Charles’ friend yelled, bewildered. But then, he saw it too. His first thought was that some unfortunate animal had been hit by a car. There was an unmistakable grey lump in the middle of the road.

But, strangely enough, there were no other signs of an accident. They decided to investigate further. And that’s when things took a strange turn. 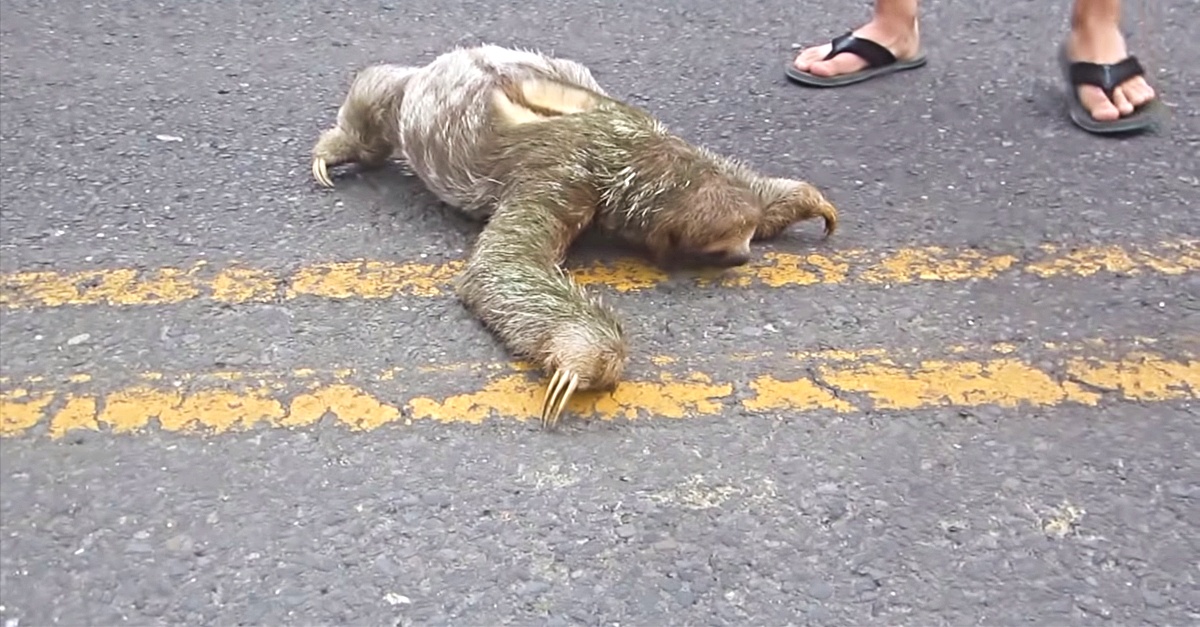 Charles slowed down as he was getting close to the spot. Only a few feet away, he realized that it was not a pothole. Nor a black plastic bag. It was a furry animal with long legs and arms. It would not budge no matter how much he would honk at it. But something wasn’t right.

Perplexed, he stopped his car and jumped out. 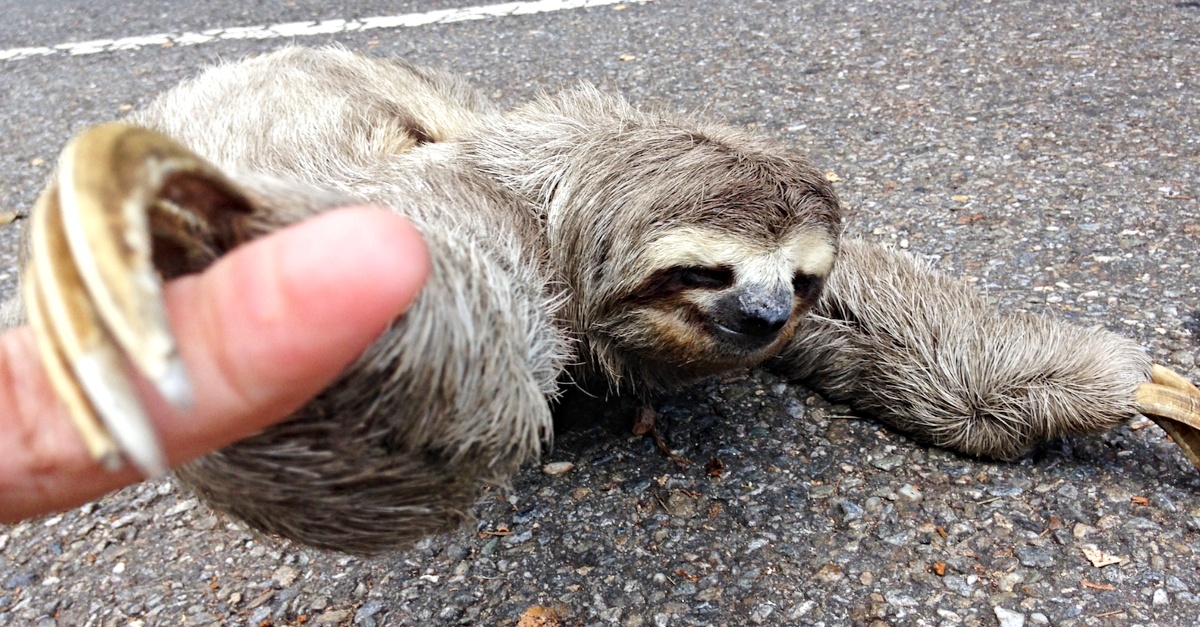 As soon as he stepped out of the car, cars started honking. Drivers were gesturing with their hands and asking why the man had stopped so abruptly. He waved at them to wait a bit.

Coming close to the animal, he poked it with his foot. No reaction. He tried to shake it with his hand. Then, to his astonishment, the animal turned its head. 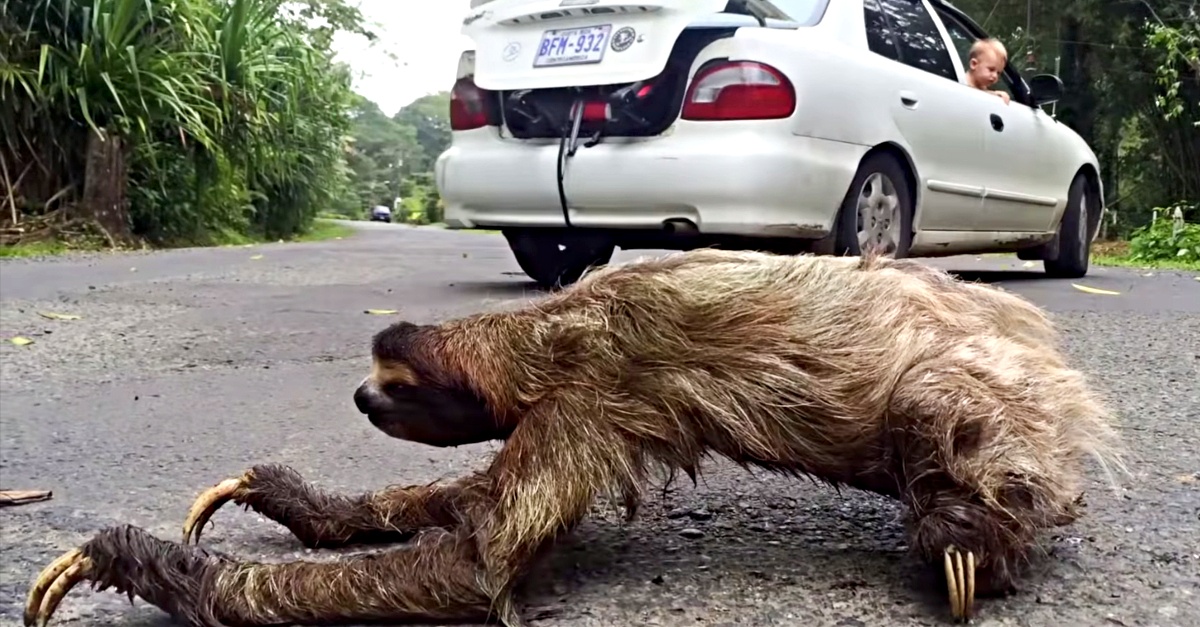 The man was taken aback by the adorable face looking at him. It had the cutest smile he had ever seen. He knew that these strange creatures were very common in Costa Rica. However, it would be more plausible to find one hanging a tree rather than laying on the road head first.

Had the creature tried to cross the road? It sounded like the beginning of a bad joke. Charles snickered before growing worried again. He looked from the creature and back to his friend. What should they do now? Then, He heard something behind him and turned to see what it was. 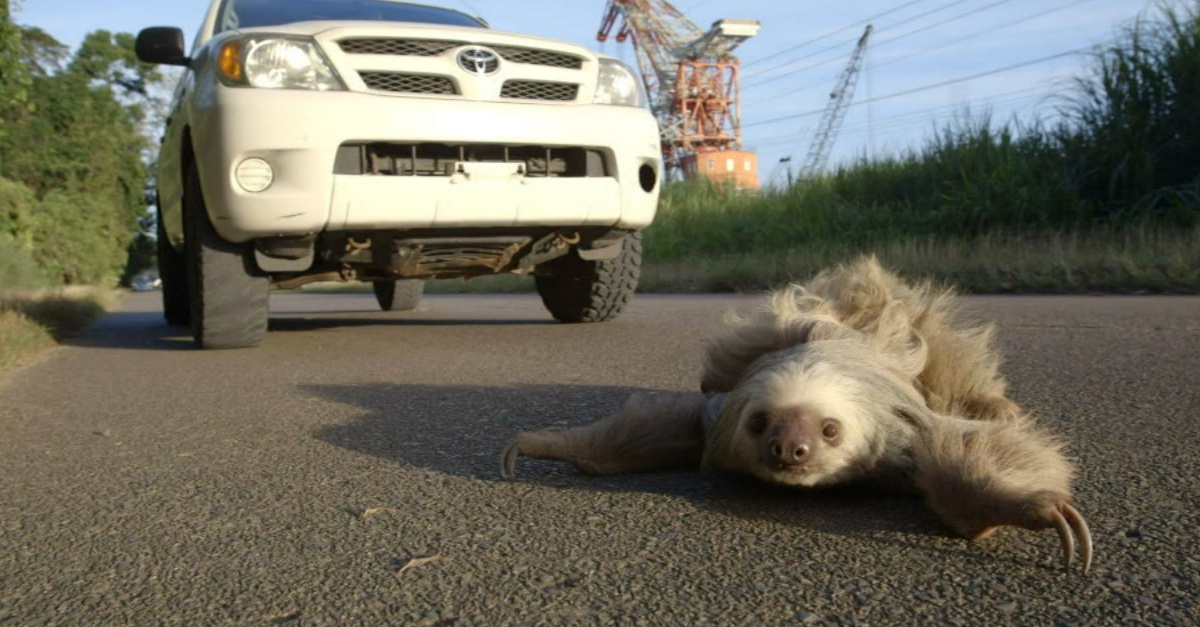 By now, many cars were parked were waiting on the left lane of the highway. One conductor, not understanding why they were being held up, got out of his vehicle.

He approached our man, fuming. “Why are we waiting here? We have places to be!”, he shouted, furious. But one look on the ground and he understood what the delay was about. He turned to the man with a quizzical look on his face. 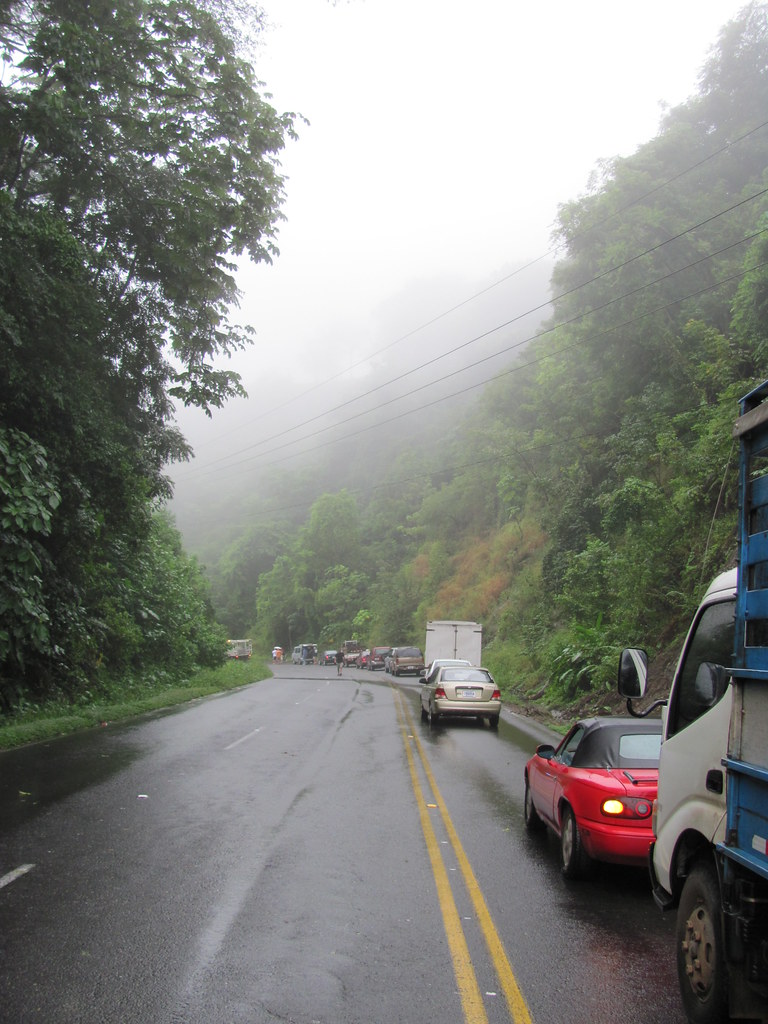 “What should we do with this little fella?”, asked the second man. The poor animal was so slow that it would never be able to get to the other side of the road on its own.

“We have to lift it and move it ourselves,” concluded both the drivers. With cars still honking, more people were joining our two men. A small congregation was forming in the middle of the road. Fortunately, that is exactly what the two men needed. 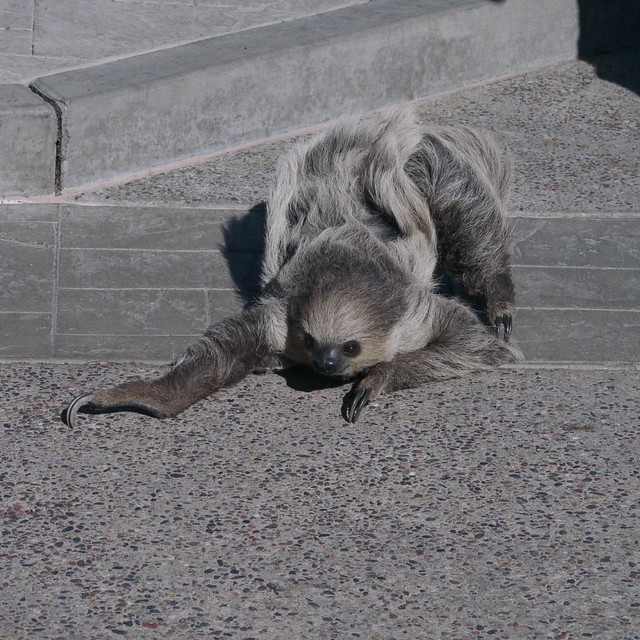 The two men knew that they needed to stop cars on both sides of the road to be able to move the sloth. More people began to arrive, peeking over each other’s shoulders. It was the perfect opportunity to ask for help.

They briefly explained to the angry crowd what was happening. People cooled off the second they understood the situation. The two men asked them to block cars coming from all the lanes of the highways. They complied and waited for the magic to happen. 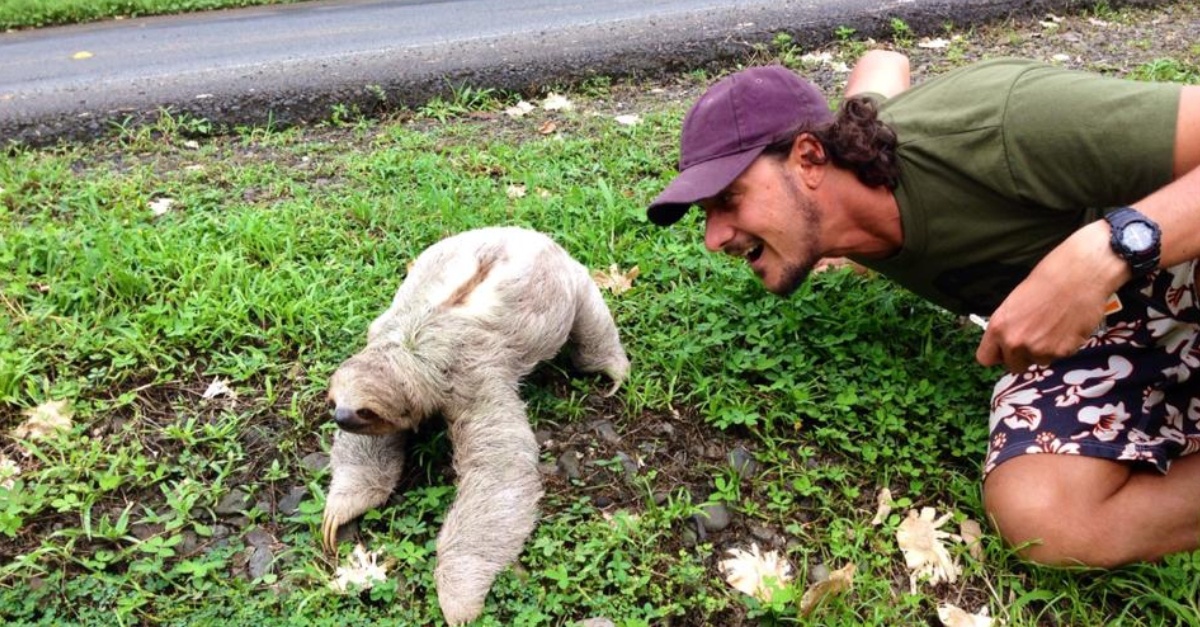 The first man bent over to reach out to the sloth. His hands grabbed the animal by the fur. The animal didn’t move. He slowly lifted it up. The sloth was quite heavy. The drivers and passengers who stepped down of their vehicles were amazed. They took out their phones to snap this unusual sight.

They didn’t know they were about to witness an even more beautiful moment. 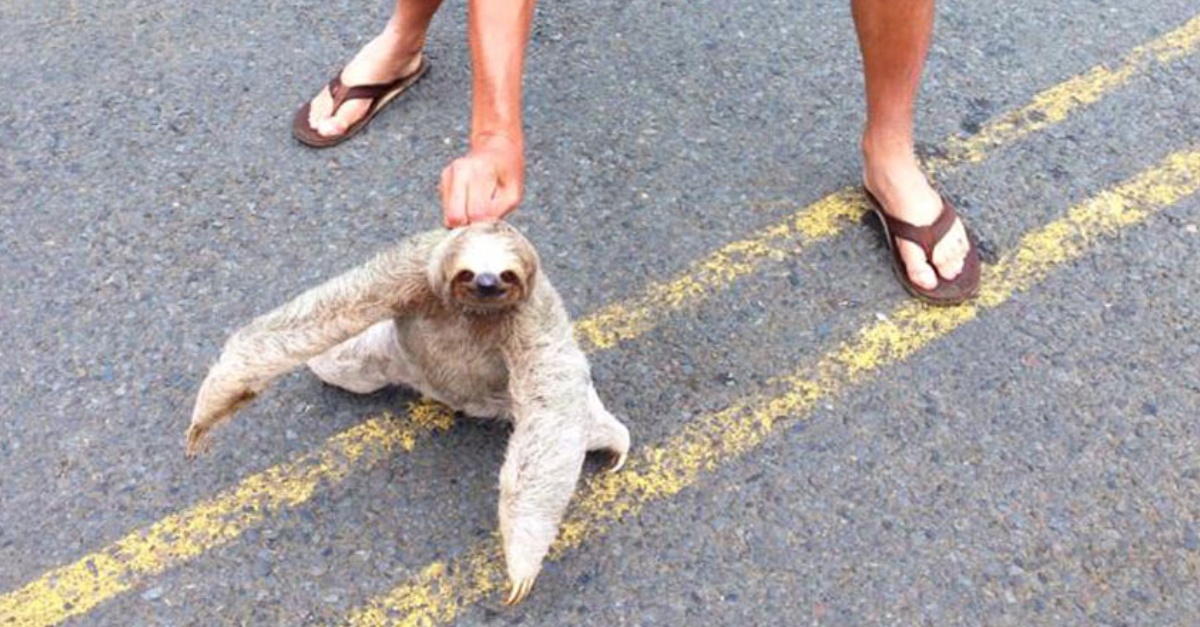 The man ran with the sloth to the other side of the road. Some people were clapping. The furry mammal, as if understanding that they were there to help, remained calm and didn’t wriggle to free itself.

Charles stopped at the first tree he found on the opposite side of the road. He lifted the sloth to its trunk and waited for it to grab it. The sloth, however, astonished everybody with another gesture. 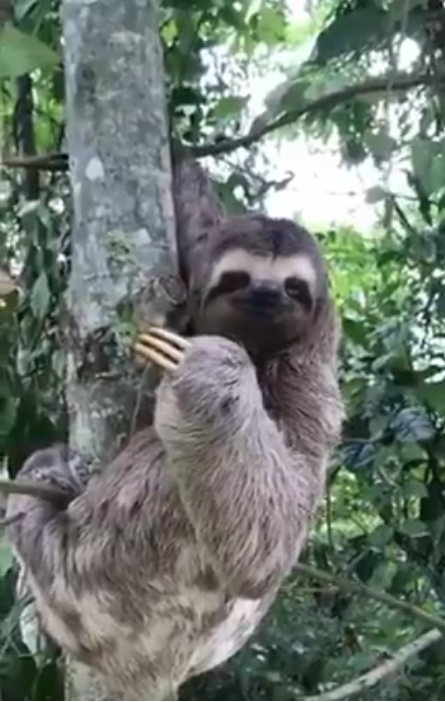 With its long claws and strong grip, the sloth quickly grabbed onto the tree.

Everybody breathed a sigh of relief. The sloth was now safe. Suddenly, the mammal slowly turned to the crowd. It started raising one of its long arms. It got it as high as it could and fixed one of the people in the crowd with its smiling eyes. In a split of a second, it got back to the tree. 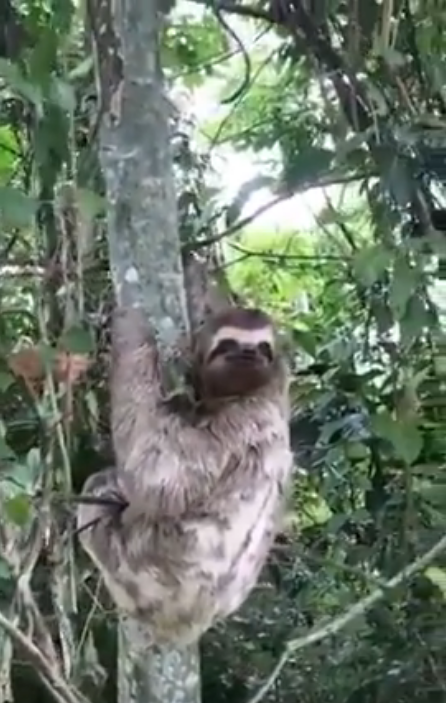 They couldn’t believe it. Did the sloth really wave at them? Was it thanking them? Or were they just dreaming? They replayed the videos they had to make sure of their assumptions. One of those videos was particularly well shot.

Its owner decided to post it to the internet to ask for other people’s opinions. He would have never imagined his video to cause so much ripple online. 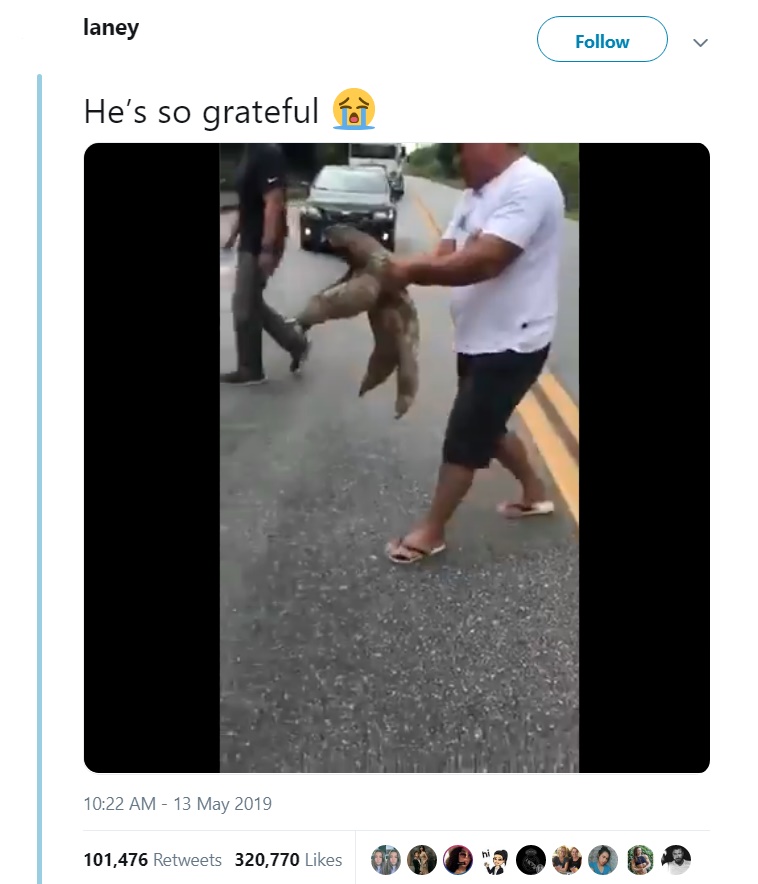 The man uploaded the video on Twitter and wrote in the description: “He’s so grateful!”

Reactions fused. Twitter users were liking, commenting, and retweeting his video with the speed of light. His phone kept on ringing for the rest of the night.

One comment was particularly insightful. Written in Spanish, it roughly translated to: “Thank you very much, sir. This is how you grab a sloth to prevent it from being run over by vehicles on the road. For those who watch this video, this is how you should handle this peaceful and beautiful animal. Again, gentleman, thank you very much.” 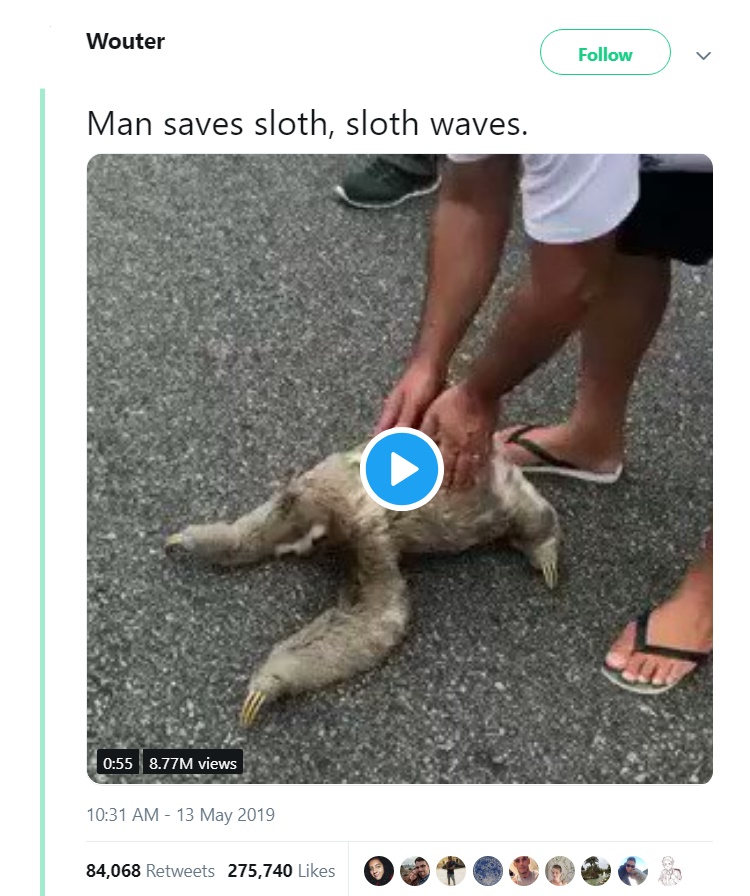 It was the dose of happiness and cuteness they needed to make their day. Both the twitter accounts were accumulating replies to the comments. They were keeping the conversation alive on their posts. Even on a simple sloth video, the comments were quite diverse.

Many comments were overwhelmingly positive. Among the comments, we can read: “As the world goes up in flames I’ve watched this 20 times. The smile and the w-a-v-e…”

“He literally smiled! And when they put him in the tree. I’m sobbing.”

“MY HEART. Thank you for this.”

Many of us got these reactions. However, not everyone was on board with it.

Every now and then, a comment would pop up explaining that the sloth didn’t really wave. Some were jokingly pointing out but still enjoyed the adorable video.

Others commented point-blank that people were making a big deal out of it. They argued that the sloth only moved its hand. It was an animal. There was no way it could communicate with humans.

No matter how different the opinions were, this simple video raises another major topic: the situation of sloths in Costa Rica. 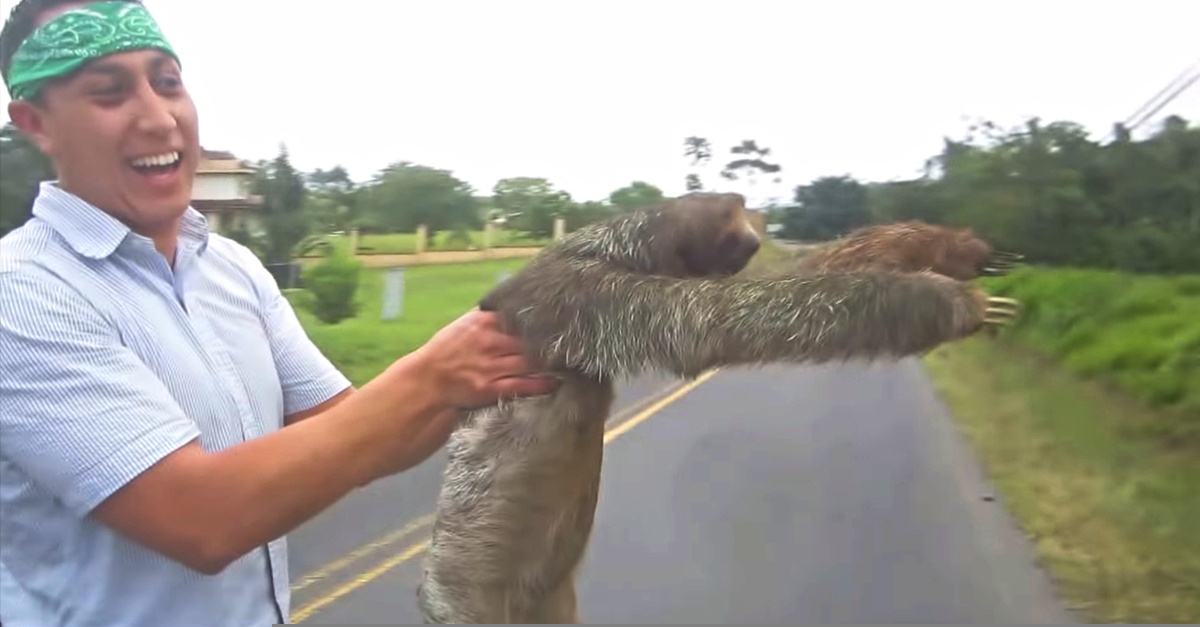 Fortunately, sloths are not categorized as endangered species. However, they are still in danger. Humans have encroached on sloths and destroyed their natural habitat. Since these mammals can’t run across roads or jump through gaps, their survival is critical. 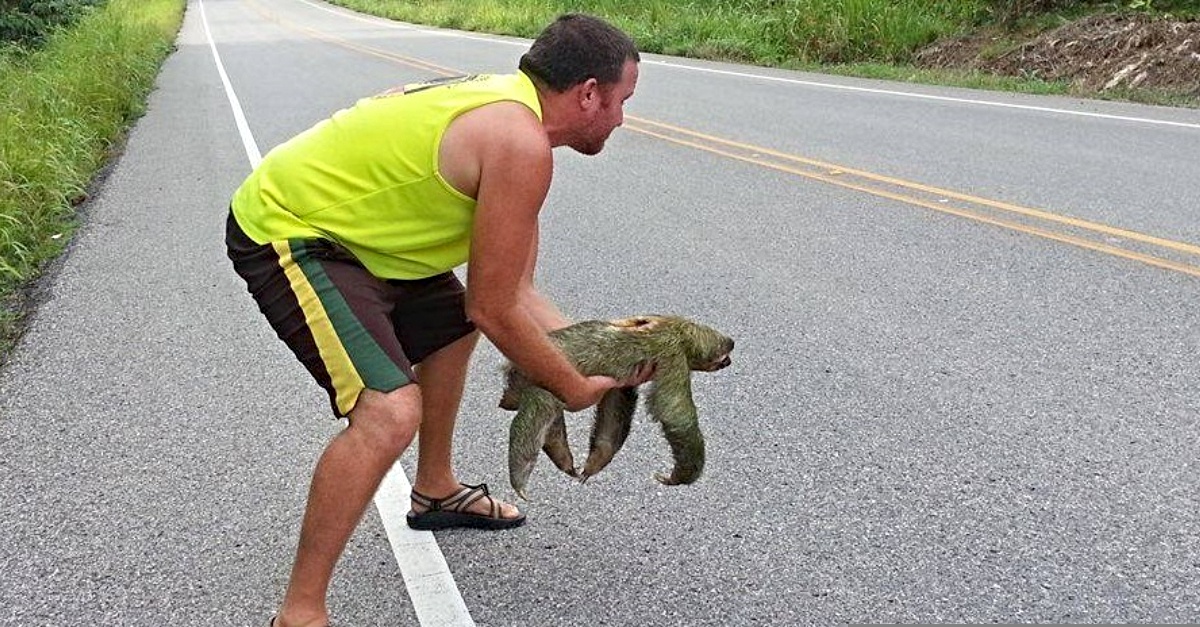 Monster’s WiSH (Wild Sloth Health) lab is a research center in Costa Rica. It takes various samples from the wild sloths to monitor their health parameters. They can then reconstitute their ideal habitat and give better recommendations to save the sloths.

And you, what do you think of this video? Was the sloth really waving and smiling?