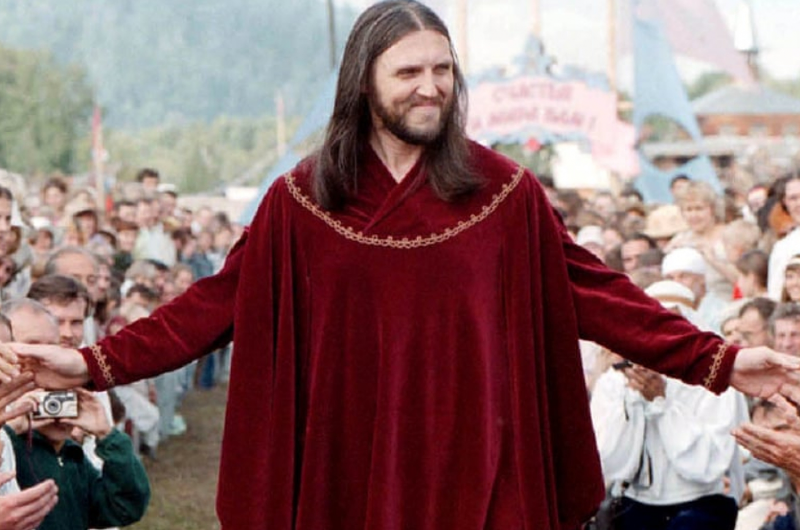 There’s a man who lives in the Taiga forest in Siberia and tells all who meet him that he is the reincarnation of Jesus. He even takes on his likeness.

He had gotten 5,000 people to follow him. He gives messages that he claims have been whispered directly from God. They call him “the teacher”.

His name is Sergei Torop and he used to work as a traffic officer before he was fired just before communism collapsed.

The Soviet Union was abolished in 1991, the same year that Torop walked into the center of Red Square and proclaimed that he was the reincarnation of Jesus himself.

People felt uncertain in the collapse of the Soviet Union and decided to reject this new religion. But many who really needed hope decided to join him.

This meant that Torop would create the “Church of the Last Testament” to give hope to people that needed it.

Torop started calling himself Vissarion which means “he who gives life”. He makes himself in the images of Jesus by wearing a long robe and having long hair. He matches the look and persona almost entirely.

Police didn’t care for Torop in the beginning but as he kept getting more and more followers and his belief spread wider, words of his strange rules would reach their ears.

5,000 people believe in Torop and say that his beliefs even if they seem weird and out of science fiction. Torop even authored a bible that has many people scratching their heads.

Some of the beliefs include suicide being alright and money being irrelevant. And that the universe was created by two explosions rather than one.

They completely believe him in his explanation of the world even if it is vague. He says that one explosion created the world while another created humanity.

They believe in an ‘outer space mind’ which is an influential entity, “The outer space mind does not have a soul. Technological progress for them is a natural form of development.”

Torop’s followers even go to extent of leaving their homes in towns and cities to move closer to him in the Taiga forest. They even have a photo of him in their shelters.

Every follower is also vegan and doesn’t indulge in smoking or drinking. But they don’t live comfortably unlike Torop.

They live in a place called Sun City in the Siberian forest. Torop named it but it seems ironic as it’s anything but sunny…

Torop has a chalet that he lives in while all of his followers live in huts in the snow – where it’s extremely cold. Instead of Christmas, they celebrate Torop’s birthday. But there’s even more to it.

Torop’s rules allow men to marry more than one wife so they can have more children, thereby boosting the cult’s numbers. However, if a male wants to take on a second wife, he needs to first get permission from the first wife. Only then can they all live together in a big, happy family under one small, cold wooden hut.

Torop himself fathered six children with two wives, though he “rejected” his first wife for an unknown reason. But after hearing the story of how his second wife came to be, it’s not hard to imagine why…

For the most part, the authorities were keeping a close but distant eye on him. But after hearing rumours that the only way Torop could afford to live in such a nice chalet was by scamming his followers, the authorities became on high alert. Then it went from bad to worse.

Many believed Torop was making his followers sell all of their belongings and giving him the profits, all under the guise of his sacred divine guidance.

But it was his prediction about the near future that began to draw widespread attention to himself and his cult. His vague ideology about aliens wasn’t half as alarming as his next belief that shut his whole operation down.

A core belief of Torop’s cult and his main teaching was that the end was coming. He frequently makes notes within his bible referencing the doomsday coming for his followers, which he suggested may happen in 2022.

It’s a teaching which rarely ends well for cult members and that’s when the authorities intervened.

Torop states that the end of the world is caused by an apocalyptic flood and that it’s imminent. According to his theory, when the flood destroys the earth, only the people who are living with him on his Siberian compound will survive.

After the flood recedes, Torop’s cult will repopulate the Earth and turn it into paradise. But there’s a catch.

Only those who strictly follow his every proclamation well will ensure their elite spot in preparation for the end of the world.

But before such strict adherence to his rules could continue, there was an unexpected scene at Sun City. A large military-style operation with helicopters and armed troops stormed the remote compound.

Torop left on the helicopter, led out by the authorities who had him in handcuffs. He now sits behind a jail cell waiting to be tried before the Investigation Committee.

He has said he will never stop doing what God sent him on the earth to do; to teach mankind about the evils of war and the havoc we’re doing to our environment. But he might not have a choice.