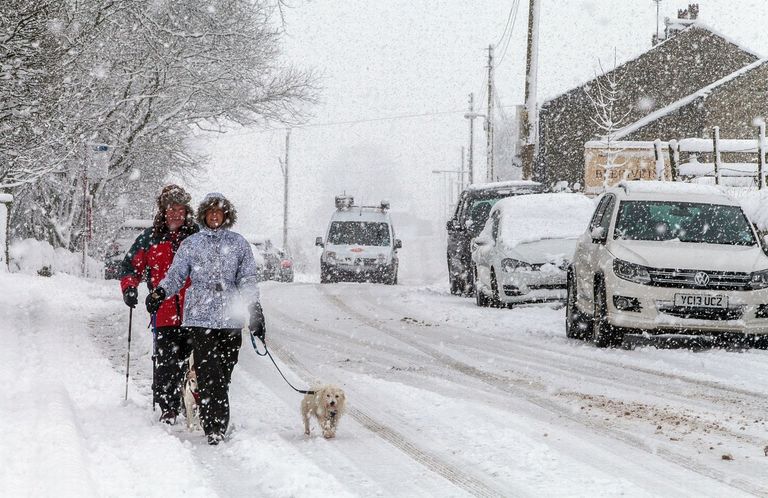 It was a situation that would pull at anyone’s heartstrings. Something that would make anyone with a soft heart do exactly as the hero of our story had done.

He first spotted it in the fresh new cold of the winter morning, nearly hidden by the snow that had piled up alongside the road before traffic began in earnest.

There’s not a lot that will drag you willingly from your warm car out into a brisk Norwegian winter morning, but once he had seen it, what other choice did he have but to become an animal rescuer?

Parking neatly between snow drifts on the road’s shoulder he got ready to brave the cold and the traffic.

The small furry creature was trying to make it’s way across a particularly busy road in freshly fallen snow, no easy task, especially for a house pet with such tiny legs.

Avoiding a few cars whizzing by, Jostein Hansen made his way to the small ball of fluff and scooped it up to save it from any further peril. Now all he had to do was find the owners… If that was even possible.

As was his routine every morning, Jostein has just dropped his daughter at school, and she immediately came to his mind when the tiny animal shot straight in front of his car, nearly missing the opportunity to become pancake-flat.

But, later, in a shocking revelation, it was found that Jostein probably should have stayed in his car that particular day!

It’s not rocket science that highways and small animals don’t mix, so he was taken aback when he recognized the small animal to be a pet hamster, very similar to the one he had bought his animal-loving daughter or her birthday.

She would be distraught if she knew a hamster had met a car or the sheer cold and he hadn’t helped.

“If some kids have lost it, then it will be seen as a disaster,” he said. “So I took the chance to try to catch it.”

With some incredible skill, perhaps from catching his daughter’s hamster whenever it decided to go walk-a-bouts, he was soon getting back into his car and realizing that there was nowhere to put the little creature. A bit of in-the-box thinking sorted out the immediate problem.

But Who’s Was It?

Stashing the rodent in his ample glove box he was now stumped by how exactly to find out who the rogue rodent actually belonged to. This would be no easy matter and so he sought some help from people that had far more reach in the community than himself alone.

He reached out to a Norwegian newspaper, iTromso. But who would take on such a small case?

She wasn’t exactly thrilled when the assignment hit her desk. For the next few hours, Sanna Drogset Børstad would be tracking down a hamster owner. Thrilling work.

It wasn’t at all her idea of a productive day of journalism, but nevertheless, she met up with Jostein Hansen and his rescued hamster, however, she had no idea what this story would soon become.

Man, woman, and hamster were soon on their way to a pet store with a difference.

This one was affiliated with Animal Protection Norway, an organization dedicated to animal dignity and welfare and with over 9,000 people working in some way for the organization they were definitely the people to help them, and they did… But not in the way either Jostein or Sanna had anticipated.

At The Pet Store

Walking into the warm pet shop, the hamster in hand, he gingerly handed the small creature over to a pet store employee.

Taking it carefully she suspected something strange but carried on her assessment. A small rodent, mid-length fur, but it was the coloration that was the determining factor. The hamster with the beautiful brown, black, and blonde fur was not a hamster at all!

In fact, what Jostein and chased down in the middle of the snow-covered road wasn’t even a pet, it was a lemming, so in actual fact, Jostein was a kidnapper, not the rescuer he thought he was.

The would-be hamster rescuer/accidental lemming kidnapper was astounded and embarrassed to learn the truth. But in his defense, they do look an awful lot like domestic hamsters. Clearly, there was only one thing left for Jostein to do now.

This particular type of lemming may look surprising like a hamster but, in fact, they are much more resilient, living primary in snowy areas.

Lemmings are solitary creatures too, which explains why this one was crossing a road all alone when Jostein spotted it. One thing surprised Gøril even more than the mistaken identity of the rodent, and it was this.

Lemmings, like hamsters, can be downright nasty little creatures if the need to be, much belying their fuzzy exterior. Say for instance if a predator was nearby, this lemming has a certain scary skill set.

Just have a look at those noshers and you know you don’t want to end up on the wrong side of that little creature. They have actually been given a special name for the particular way that they are colored. I bet Jostein didn’t know that!

Aposematic, a big name for a bold little animal. What it means is simply that they are colored or made in a way that signals that they have special capabilities for defense.

In the case of the Norway Lemming, it’s their brave demeanor that is their superpower.

When confronted with a predator or an intruder, instead of running away, the lemmings do the exact opposite. They launch into an attack and some have even been known to attack approaching humans.

So how exactly did Jostein manage to handle the critter as though it was the house pet he believed it to be?

One theory is that the lemming somehow knew that Jostein meant him no harm, and that was completely true. After realizing what he’d done, Jostein knew he had to return the tiny creature back to where it belonged, albeit a tad further away from the roadside.

Thanking everyone for the help he and Sanna went to do just that. They send the tiny critter on its way with a wave. When people found out about the whole hamster/lemming fiasco they did not react the way you would think.

Unbelievably, some residents became quite upset at the gentle man who had kindly ‘saved’ the sweet ‘hamster’, but Sanna and Gøril stand behind him to this day, both adding kind words:

“He did the right thing,” Gøril, the worker who identified the rodent’s true identity said. “He saw an animal he thought needed help and helped it.”

And Sanna’s ‘boring’ day of work turned out to be one that she will never forget. Her ordinary and unexceptional story ended with a good chuckle.

“We all laughed a lot when we figured out what it really was,” Sanna commented. After all, the lemming was reunited with its home barely hours after it was nabbed.

One Of A Kind

Jostein’s decision was one of a kind heart, he truly believed he was helping an animal in trouble which is far better than the alternative.

What if it had truly been a hamster and he had left it out in the cold snow? Jostein felt compassion and better still acted on it.

What Would You Do?

At least we know that there are people out there, saving hamsters in the snow because, well, what would his daughter have said if he hadn’t?

What would you do in a similar situation? I’m sure you’d be saving hamsters too. Even if it was in the snow and you hadn’t had your morning coffee yet.