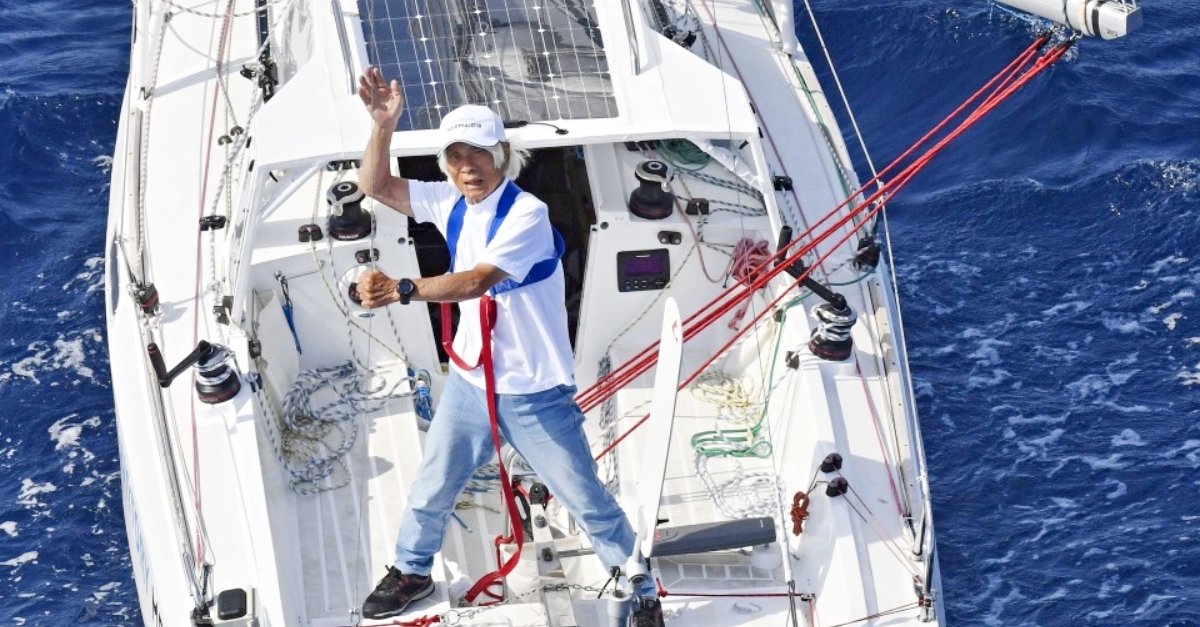 When Kenichi first made the journey, he was a young man and full of life. It was a lot easier then, despite the perils. Confidence was never a problem and he had proved his doubters wrong.

Things were different now. He was an old man, in his eighties, and a lot more frail than he used to be. The pacific ocean was a vast, unforgiving place when you were all alone. Many people expressed their concerns. The clouds were darkening and for the first time, Kenichi found himself wondering whether he was capable of surviving the trip.

Kenichi Horie was born in Osaka, Japan. The year was 1938 and the world was in the grip of the greatest global conflict it had ever known. Being Japanese during this era came with many risks as the residents of Hiroshima and Nagasaki soon found out.

Kenichi managed to survive this perilous time. As a young man, he was already proving to be highly ambitious. However, some of those ambitions would place him in harm’s way once again.

In 1962, Kenichi was 23 and already longing for a life beyond the shores of Japan. Since the dark days of 1945, things had improved between the USA and Japan and that was when Kenichi set his sights on a seemingly impossible goal.

Many of Kenichi’s friends and family still thought of him as an immature young man with stars in his eyes. In time, he would prove to everyone just how capable he really was.

Kenichi’s ambitious plan was to sail all the way to America. He did not have the required papers or supplies needed for such a trip but was determined to make it regardless.

Th trip already seemed an unlikely dream. What made it even more dangerous was that Kenichi planned to make the entire trip alone and his vessel would be nothing more than a simple sailboat, nicknamed “the Mermaid”, and made entirely of wood.

With little more than his boat, cash in his pocket, and a heart full of ambition, Kenichi set sail across the pacific ocean. Even though he tried to secure legal permission for the trip, he was not granted a visa, and decided to do it anyway.

Surviving on little more than canned food and rice, Kenichi sailed for three long months. He was completely alone and would have to brave every danger all by himself.

Along the way, Kenichi battled inclement weather, dangerous sea levels, hunger, and thirst. The trip was physically and mentally taxing but Kenichi remained steadfast in his ambitions.

Remarkably, after three months, he made it all the way to San Francisco. It was an astonishing achievement. In other circumstances, he might have been cheered for surviving such a perilus trip. Instead, not long after reaching his destination, he was arrested.

Without a passport, visa, or any official papers, the port authorities at San Francisco had no choice but to arrest him. His remarkable trip did, however, cause a stir among locals, and news of it soon reached the right ears.

The Mayor of the day, George Christopher, was taken with Kenichi and decided to help. Since he had managed to pull of such a daring trip, Mayor Christopher granted him a visa and a key to the city, effectively saving him from jail time.

Sailing became Kenichi’s life mission. By proving his doubters wrong, he now knew what he was capable of and dedicated his life to sailing the oceans.

He would go on to make many more astounding trips around the world. Always on his own, solo yachting trips became an obsession to him. With each trip, he tried to surpass his previous achievements but he also began taking greater risks.

By the 2000s, Kenichi found newer and more inventive ways to indulge his passion. His long list of sailing achievements included circumnavigating the globe from north to south and east to west.

Over the years, his vessels became as creative as his dreams. His many voyages included trips with a solar-powered boat, a paddle boat, boats constructed from recycled materials, and even a trip completed entirely in a wave-powered boat.

Kenichi has lived an extraordinary life by any measure. By the time 2022 rolled around, he was now 83 and had accomplished many feats that people thought impossible.

With nothing left to prove to himself or anyone else, people expected him to slow down and enjoy his old age.  Insead, the adventurer planned another trip, one that he hoped would be his magnum opus.

At 83, Kenichi Horie set sail aboard his 19-foot sailboat, Suntory Mermaid III. This time, his journey began in San Francisco and was due to end in Japan.

Once again, he would be alone and attempting to cross the world’s largest body of water without a crew to assist if anything went wrong. It would be 69 days before he was seen again, and his miraculous story could be told.

Once again, Kenichi proved all his doubters wrong by successfully completing the seemingly impossible journey. Reaching Japan safely, he had also accomplished another remarkable feat.

After setting many previous sailing records on his other trips, this one was perhaps the most special. At 83, Kenichi Horie set a new Guinness World Record as the oldest person in the world to ever cross the pacific on a non-stop trip as a solo yachtsman.

Kenichi has proven to be one of the most determined and resourceful sailors in history. He continues to sail and still loves making boats out of eco-friendly, recyclable materials. A lot has changed since his maiden voyage in 1962.

Now that Kenichi has boats that employ GPS and other technological advancements, he is spared a lot of the peril these trips used to place him in. People are always wondering, how does he do it?

Despite his advanced age, Kenichi manages to keep his mind sharp and alert and avoids falling apart from isolation by keeping in touch with family via satellite phone.

Even at this age, he remains sprightly and is full of energy to continue with his four-decade passion. After already achieving so much, it appears that Kenichi still isn’t done.

According to Kenichi, he is not done with sailing. He plans to keep sailing even when he is a 100-years-old and beyond.

Speaking to CNN, his advice to others is, “Don’t let your dreams just stay as dreams. Have a goal and work towards achieving this, and a beautiful life awaits,”