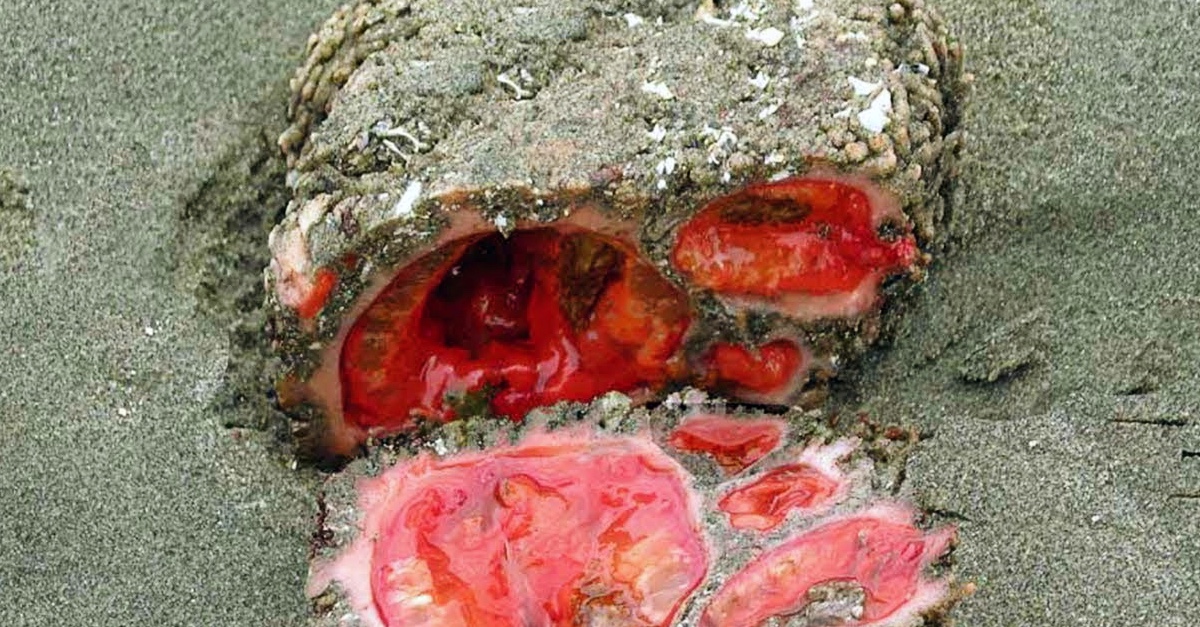 He watched the two officials arrive at his house and cordon it off. Demanding to know where the “rock” was, Stephen told them that it was in a box on the dining room table. Donning their protective gear, they went in to dispose of it safely while he and his wife stood outside, incredulous.

After a few minutes, the officials reemerged from the house and told the shaken pair what they had discovered.

It had all begun in the Spring of 2016. Steven Whitten and his wife, Viola, were taking a walk along Middleton Sands, their favorite stretch of beach in Lancashire, England.

The beach, which offers breathtaking views out into the Irish Sea, was only a stone’s throw away from their home in the village of Overton.

While Middleton Sands is a popular spot among hikers and dog owners, Steven and Viola preferred walking along a less popular area of the beach.

They were admiring the view when Steven began to notice a strange, acrid smell in the air. Little did they know, they were about to stumble onto something that would change their lives.

The unwitting couple followed the foul smell right to its source. There, lying washed up on the beach, was an odd and odorous rock, about the size of a football.

It had been worn smooth by years of being pummelled by the waves and it seemed to have a strange, waxy texture. What had they found?

Steven touched the rock, gingerly. He had read about strange beach finds in the area before, but he had never heard of anything like this being found in the area.

With his curiosity piqued, he picked it up and wrapped it in Viola’s scarf. He couldn’t wait to get online to see if his suspicions were true.

As soon as they arrived home, Steven used his fisherman’s scales to weigh the strange lump. When he saw the reading of 3.5 pounds, he and his wife became even more excited.

He took to a community group on Facebook and posted a picture of the “rock” online. Soon, his post was flooded with comments.

Some speculated that it was a piece of volcanic rock that had originated in a volcano deep under the ocean, while others said it looked like a meteor.

An amateur meteorologist was quick to suggest that Steven tried the “magnet test” to know for sure. But, in the end, they were all so very wrong.

“It feels like a rock-hard rubber ball, its texture is like wax, like a candle. When you touch it, you get wax sticking to your fingers,” Steven later explained in an interview.

But what was it about this odd “rock” that would cause such a stir in the Whitten household? Indeed, after Steven had held the object against a magnet, he knew that it was time to panic.

The “magnet test” confirmed that the “rock” contained no iron — which meant that it definitely wasn’t a meteorite. And nothing explained the object’s foul smell.

Steven conceded that he had no idea exactly what he had been handling, or if it was dangerous. After a short phone call, the men in protective suits arrived.

Two officials arrived at the house and cordoned it off. They went in to dispose of the substance safely while Steven and his wife stood outside and gave them instructions: the “rock” that they had found was in a box on the dining room table.

After a few minutes of careful examination, the officials reemerged and gave the terrified pair the news.

Steven was relieved when the officials told him that he hadn’t picked up a hazardous piece of waste on the beach, but when they told him what the “rock” really was, his eyes widened.

They said that, while extremely rare, hunks of ambergris do wash up on the shore from time to time. But what is ambergris?

As it turns out, ambergris has been a highly coveted substance for centuries. It is known for its foul smell — “like a cross between squid and farmyard manure” — but its odor sweetens over time.

In fact, ambergris has been used in expensive perfumes for hundreds of years. Some historians believe that it may even be edible.

Ambergris is actually a whale by-product. It is produced in the bile ducts of whales and then excreted. While this sounds revolting, it is so rarely found in nature that it’s worth a fortune to the right buyer.

Steven and Viola had just stumbled upon it on a beach walk! They couldn’t believe their luck! But, of course, there was a catch…

Ambergris is only produced by one species of whale, the sperm whale. Sperm whales are found in oceans all around the world, including Britain’s coastal waters.

Individuals can grow to a length of 67 feet and their weights have been recorded at over 63 tons. While sperm whale populations have increased, these majestic creatures were not always so prolific.

In the past, sperm whales were commonly hunted for their blubber, which was used to make everything from candles and soap to machine oil and pencils. Indeed, ambergris was also harvested for its unique scent.

Sadly, as many as one million whales were killed during the 19th and 20th centuries. Then, in the 1980s, a ban on whaling was passed — which included ambergris.

Adding to ambergris’ mystique and rarity is the fact that it is only created very slowly — over years. It is also believed that not all sperm whales produce it.

Experts say that only around one percent of the sperm whale population will produce the coveted substance. And, oddly enough, it is mostly found in the Atlantic ocean.

The trade of ambergris has been outlawed in most countries, including the United States. In America. The illegality of trading ambergris forms a part of a wider ban on the hunting and exploitation of whales.

But, luckily for Steven, in the United Kingdom ambergris is considered a waste product. So, just how much was it worth?

Well, the Whittens were surprised to learn that another lump of ambergris had been found on the beach by a man in Morecambe, which wasn’t far from where Steven and Viola had found theirs.

And that piece had fetched a staggering $155,000! So, how much would the Whittens get for their piece of “floating gold?”

A Ton Of Cash

The piece of ambergris that had been found in Morecambe weighed around six pounds — it was twice as large at the Whitten’s piece. Still, that meant that the ambergris could fetch around $65,000.

That’s a staggering amount of money for a piece of whale by-product! So, what do Steven and Viola intend to do with their windfall?

Would they settle their debt or pay off their mortgage? Or perhaps go into early retirement?

Well, in a perfect example of “British restraint,” Steven humbly told the Daily Mirror, “If it is worth a lot of money, it will go a long way towards buying us a static caravan. It would be a dream come true.”