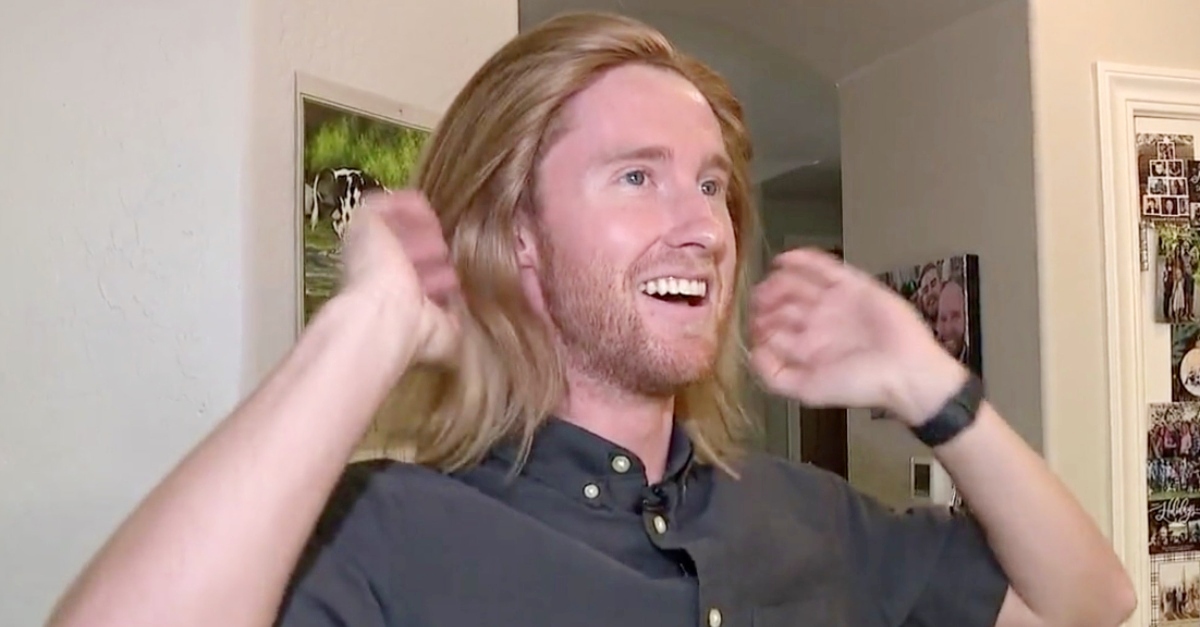 People were wary of the sudden change in his look, but the man was known to be a nonconformist. His close ones had no choice but to accept his decision to change his look.

As time passed, the young man didn’t budge and stuck with his choice. Some people were impressed by his incredible commitment, while others were burning with curiosity. After two years, the time had finally come to reveal why he did it.

No one from his circle had anything bad to say about Matt Shaha. He was kind, generous, respectful, and a young man many appreciated for his ambition.

Matt and his family originated from Idaho but ended up in Arizona. He had always been close to his family, and as a young boy, Matt always had a smile on his face. However, things would take a turn for the worse very soon.

In 2003, Matt’s mom, Melanie Shaha, was diagnosed with a pituitary tumor. It was a difficult time for the family, especially Matt, who was very close to his mother.

It didn’t take long before Matt and his family had to make a difficult choice. In spite of all the dangers, Melanie chose to have surgery for her illness.

Luckily, the surgery went well, and Melanie’s tumor was successfully extracted. The family was incredibly happy and tried to get back to their old life as soon as possible.

But the family’s joy and relief didn’t last long. Unfortunately, by 2006, Melanie’s tumor had grown back. And this time it was actually larger.

When the doctors finished their tests, they realized the tumor was the size of a small plum. It was a difficult moment for the family as they had hoped it would be over soon. They couldn’t be more wrong.

The pituitary gland is a small gland located at the base of the skull. If things go wrong, it can impact your metabolism and reproduction, as well as other functions.

The reappearance of the tumor meant a new challenge for the woman and her close ones. The family had to hope for the best again while doctors did everything they could to remove it.

It was the second time. Matt Shaha could do nothing but sit back and wait for his mom to go through another surgery. While doctors were hopeful, there were obviously risks with these kinds of procedures.

Once again, Melanie was lucky enough to have the tumor successfully removed. Her health improved rapidly, and the family could finally celebrate her health and go on living a happy life.

Many years passed, and Melanie was doing just fine. Matt had begun growing into a fine young man and he was the pride of the family. But the problems weren’t over yet.

Melanie and her family believed they had seen the last of her tumor for more than eleven years. Unfortunately, in 2017 it returned once again. This time, there were further complications, and doctors couldn’t operate. There was nothing they could do.

Melanie was forced to undergo radiation and hoped the tumor would begin shrinking that way. It was a very difficult time for her and the family, especially Matt.

Matt was terrified about his mother. He believed that she went through enough already and a third time battling the same tumor was too much. It wasn’t easy for the young man to see his mother suffer like that. About that time Matt also began growing his hair.

It seemed weird to people around him, maybe even rebellious, but they had no choice but to make peace with his decision. They thought he might be imitating someone or something in that area.

Mad always had short hair. When he suddenly began growing it, people couldn’t understand his reason. Then the weeks turned into months, and he just wouldn’t get a haircut. He kept growing his hair longer and longer.

As his hair grew out, the young man had to suffer some ribbing from family and friends because of it. But Matt was determined to keep growing it no matter what. And no one really knew why he was doing it.

When the months turned into a year and then two, some people closest to Matt were surprised that he was still sticking to his newfound love for long hair.

Matt still supported his mom through all her treatment but became a little obsessive over his hair. After two and a half years, it had grown quite long. He was now satisfied with the length, and it was finally time to show everyone why he had done it.

When Melanie Shaha was diagnosed with a third pituitary tumor, this time, she had to sit through hours of radiation therapy. Unfortunately, the side effects of this kind of therapy were horrendous.

One side effect was that she lost all her hair, which was difficult for Matt to see. Being the amazing young man he was, Matt grew his own hair for two and a half years and then had a hairdresser cut it, so he could turn it into a wig for his mom to use.

Matt’s amazing gesture meant that his mom, who had been forced to go bald since her radiation treatment, could now have a beautiful new head of hair, made especially for her.

Matt showed the deep love he held for his mom by not only sacrificing two years of haircuts but also by making sure it was just perfect. So, how did he do it?

Once Matt was satisfied with the length, he visited a special hairdresser that knew exactly what he wished to do. His locks were carefully cut off and collected in just the right way.

This was far from the end, though. Matt had to then have the hair sent to a company called Compassionate Creations in California that specialized in such wigs. That wasn’t all.

Matt spent $2000 to have the special wig made for Melanie. She was overjoyed at what her son had been able to do for her. According to Today, Melanie said, “The color is spectacular, and we had it cut and styled with a hairdresser.” As for Matt, he brushed off all the praise heaped on him for his extraordinary act. Speaking to KSAZ, he said it was a “no brainer” because “She gave me the hair in the first place.”