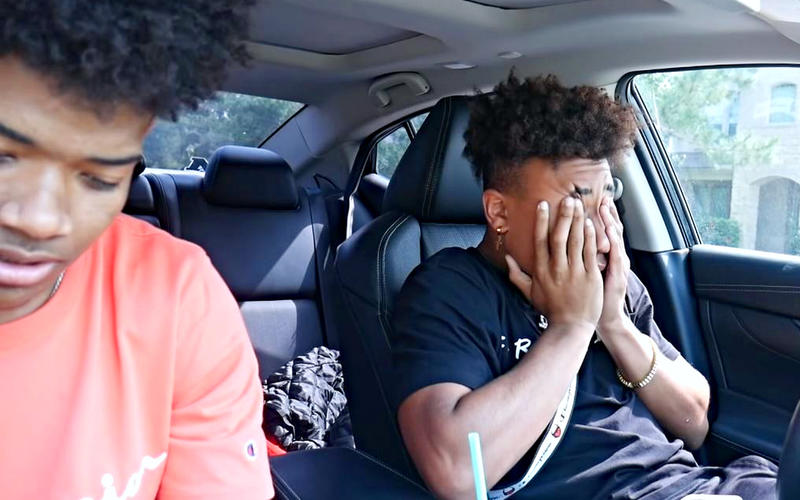 His whole body was begging him to either roll out of the car or take control of the steering wheel. Where were they headed? He had a very bad feeling about this.

Then the car suddenly stopped, his friend softly said “get out,” without even glancing at him. Something wasn’t right, where were they anyway? What was his friend planning and had he stumbled on his secret?

Mike and Jim were inseparable, they were best friends for life and had been that way since they were both eight-years-old. They had both been together through it all – tragedy, loss, and heartbreak.

If Mike could only be sure of one this it was that his Jim had his back through everything. Mike knew he could rely on and trust him. He would be proven wrong.

It was Mike’s birthday weekend and he was excited to spend the gift card that had been given to him the weekend before. It was the perfect day to go out and splurge a little. It was his birthday after all.

Mike was looking in all the store in the mall at the items he could now afford, what would he buy? He really didn’t know. Suddenly Mike noticed Jim amongst the busy crowd of mall-goers. He walked right up to his friend to hug him but Jim just shrugged him off. What was his problem?

Jim had Mike’s trust through it all, but Mike hadn’t been honest with him about one thing… He’d been keeping something from him for more than two months and wished he could tell him. He just didn’t think Jim would understand.

Jim gave him a stern look and turned around to hurriedly walk out the shop door. Maybe he knew about his secret? Mike felt a feeling in the pit of his stomach.

Mike had always liked Jim’s sister, she was beautiful and it turns out she thought he was attractive too. So the two had been secretly dating for two months without Jim knowing. They felt that if he ever found out he would be infuriated.

They had been meticulous in their planning. They always hung out where they knew they wouldn’t bump into Jim. Mike felt confident that Jim was none the wiser. But what if he wasn’t?

Mike was sitting at a coffee shop while trying to understand why Jim brushed him off. He was feeling about his secret and it was gnawing at his conscience. He needed to figure out if Jim had any idea about the secret romance or if he was upset for some other reason.

Jim was his best friend and he didn’t want it to end by any means. But he really liked her, what could he do? Mike was waiting at the coffee shop for Jim, he had invited there so they could talk.

Mike was actually surprised when Jim answered his text simply saying “On my way.” He normally used emojis or gifs whenever they texted each other. Mike knew this was serious.

Mike sat inpatiently while he drummed on his lap. He was so nervous he almost bumped the table and spilled his coffee everywhere. He noticed his hands were shaking and the lap-drumming wasn’t helping.

He waited and waited, but after 45 minutes it dawned on him that Jim wasn’t going to arrive. He could have just refused his invitation but this was cruel. Did he deserve this treatment? Maybe it made Jim feel better standing him up.

He dialed Jim but it went straight to voicemail. Jim was giving him the silent treatment and he knew it. After a little while longer he recieved a message, it was Jim. But what it said just made Mike scratch his head.

The text read: “Change of plan. I’ll pick you up and we can go somewhere else,” Mike was confused now more than ever with his friend’s behaviour.

As his eyes kept re-reading the text, he wondered why there was a need to go somewhere else. Maybe he didn’t want to make a scene in public? Mike replied with, “Sure thing.” The text couldn’t convey the nervousness in mind thankfully.

Mike was sitting on the pavement in front of the coffee shop. He was preparing himself for the black eye he was going to receive. But what he was unaware of was that it would be much worse than any black eye.

His heart raced as he saw Jim’s car coming around the corner. He was ready for whatever Jim had in-store for hi. The car stopped in front of Mike and he heard his friend’s annoyed voice say: “Hop in.”

Mike obediently obeyed his friend and got into the car. Jim He wasn’t met with any kind of hello or even a handshake. Even though both of them were sitting down, Mike couldn’t help but notice how much bigger Jim was than he would ever be.

“Where are we going?” Mike nervously asked. “You’ll see,” Jim muttered, not even looking at Mike. He could he the whites of Jim’s knuckles as he clutched the steering wheel tightly. They pulled onto the highway and Mike suddenly realized something.

Mike shifted nervously in his seat as Jim bombed along the highway. The sign marking the edge of the city flew by them. Where was he taking him?

An hour passed and you could cut the tension in the car with a knife. The sound of traffic grew distant as they drove down the winding, deserted roads. Mike was starting to panic. “Just wait,” Jim insisted.

Mike couldn’t take it any longer. Things were clearly not OK between them, so he might as well get everything out in the open, he thought.

Then, just as Mike was about to demand that Jim to pull over, the car screeched to a halt. Jim turned to Mike, his eyes bloodshot. “Get out of the car,” he muttered.

“Just get out,” Jim said in an intimidating voice. It was clear to Mike that his “friend” wasn’t playing around. Mike did as he was told and hesitantly got out of the car, his heartbeat pounding in his throat.

Mike had to make a decision. Instinct told him to run, but his legs had turned to jelly. Jim made his way over to the passenger side as an uneasy feeling crept up Mike’s spine.

Alone In The Dark

“Jim, what’s happening?” Mike begged. Jim swiftly turned Mike around and placed a blindfold around his eyes before pushing him away from the car.

At this point, Mike didn’t see the point in struggling. Jim was much stronger than him. He led Mike deep into the woods. The sun was setting. Despite knowing his best friend was right behind him, Mike had never felt more alone.

Deep In The Woods

As Jim pushed him further into the dark woods, Mike could hear the chirpipng of birds slowly fade into silence.

All of a sudden, Jim stopped dead. “Jim?” Mike called out. But there was nothing but the sound of the wind in the trees. Mike was sweating buckets as it dawned on him that he was now standing alone in the middle of a dark forest. “Jim!”

As Mike stood there blindfolded, the suspense was killing him. Did he deserve a smack in the mouth for sleeping with Jim’s sister? Maybe.

But you know what, thought Mike. We’re both grown adults, and I don’t need permission from anyone’s brother to date them. At that moment, Mike felt the blindfold whip off his face. And when he locking eyes with what was staring at him, his newfound confidence suddenly took a nosedive.

“Surprise!” Jim shouted, along with about a hundred of his close friends and family. As Mike’s eyes adjusted to the light, he was overwhelmed with relief.

Mike didn’t say a word as he scanned the scene of people stood amongst decorated tables ready for a belated celebration of his birthday. Then his eyes fell on Jim.

“Happy birthday, Mike!” Jim exclaimed. Mike was stunned. So much was running through his head at that moment, he couldn’t get his words out.

“Why didn’t you just tell me we were going hunting or something?” Mike eventually mustered. “Well,” Jim began, handing Mike a beer. “I figured if you thought I knew about you and Ronnie, there’s no way you’d suspect the party.” Beer sprayed from Mike’s nose at the shock of Jim’s latest revelation.

“You know about me and Ronnie?!” Mike asked, getting ready for that punch to the face he’d been dodging all afternoon.

“Of course,” Jim replied. “I’m not a moron. But you are if you don’t go over there and say ‘hello.’” Jim disappeared into the crowd, revealing Ronnie standing in the clearing in a stunning summer dress. What are friends for, eh?