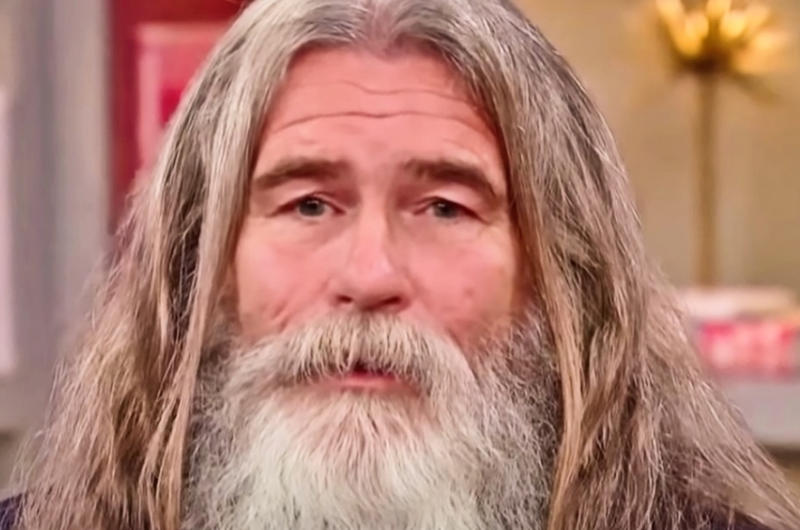 They didn’t know what they were really going to be doing.

They knew they had creative control since there were 20 years of neglect that they had to work through. He didn’t see what they had but knew it was drastic when he saw everyone’s reaction as he walked out.

Jeffrey Schultz was a very unkempt man, but he was well-aware of that.

The look started when he hit his mid-life crisis. But over the years he grew used to thick hair that hid his face. But someone else wanted him to get rid of it.

Love At A Young Age

Jeffrey had been married to his wife for 30 years! He and Lori met in their early twenties. He was taking over his father’s business while his wife was studying.

They married just two years into dating. At the time Jeffrey was well-groomed – sporting wavy hair and a shaved face. But he looks very different now.

His wife Lori was the love of his life. And she loved him just as much.

She had never complained about the way he looked. But whenever they wanted to go out somewhere rather fancy, he noticed the look of sadness in her eyes.

She always looked after herself for him. She spent hours every morning getting ready to look her best.

Jeffrey knew that he didn’t pay the same attention to the way he looked. He was complacent with his appearance but he saw the warning signs from her.

Even though he wanted to change he felt that he wasn’t quite ready.

Jeffrey was a mechanic by trade. If he had a job that needed him to clean up more he would have. But he didn’t, so in his mind why bother?

Jeffrey would grow attached to his look after sporting it for over 20 years. But Lori didn’t understand why he had this attachment.

Over the years Jeffrey felt that his appearance was just a part of his identity. Some people even place their entire identity on their looks.

Even though from the outside Jeffrey seemed like he didn’t care, that wasn’t quite true.

Jeffrey was a man that seemed that he didn’t care about the way he dressed or looked. But in fact, he used the way he looked to hide himself.

His appearance was important to him, it sent a message that he was above vanity but the truth was, he was scared to change his look, because his look was how he identified himself.

When Jeffrey told Lori of his fears of changing himself, she began to cry. He had this insecurity about himself and Lori had no idea why. To her, he was the most wonderful man in the world.

Now, she knew it was just fear holding him back and that he needed a nodge. So she planned a sneaky ace up her sleeve.

“I sent an email to the Rachael Ray Show,” Lori admitted, a sly smile creeping up on her face.

“Oh, that’s a dirty trick!” Jeffrey said, it was one of his favorite shows and it had more to do than the cooking aspect.

Jeffrey loved the makeovers they did! There were a few episodes that had amazing transformations.

But the one that stuck out in Jeffrey’s mind was the Southern-fried makeover that a couple from Concord, North Carolina, went under. When Jeffrey watched their transformation, he recognised a lot of himself in their image.

The couple, Stacey Collins and Brandon Helms, had very little care to give about how they looked. The couple usually wore camouflage, denim jeans, hoodies and anything else that was comfortable.

But one day, Stacey decided that she wanted to look pretty again but she just didn’t know how.

Jeffrey watched the episode on the edge of his seat as style guru, Kyan Douglas, got to work. However, it took them a while to convince Brandon to cut his beard, and the words that did it were from his wife.

It was obvious that the wife on the show was just being nice. She obviously wanted the beard to go. He looked at his wife with quiet knowledge that she felt the same.

But for 20 years, she said nothing. He knew how much he loved her. Now it was time for him to do something for her. All he could hope is that she’d react like the wife on the TV.

Jeffrey watched as the new couple walked out in front of the cameras. The transformation was incredible! The couple looked at each other in shock with a completely new admiration towards each other.

Jeffrey chuckled at their reaction. But could he really be so lucky as to be chosen for a national broadcasted makeover?

Just when he thought there was no way he was going to be picked, they got a call for the two of them to go to New York. Not only that, but the makeover team also they had lined up was out of this world.

Jeffrey and Lori knew their world was going to change, but they had no idea how much.

Kyan Douglas from Queer Eye for the Straight Guy would be seeing to the makeover!

The owner of the best men’s salon in Miami would also be there. Just so weeks from finding out, Jeffrey would be on the set of the show, a smile on his face.

He couldn’t believe he got to see his favorite TV show behind the scenes. It felt that he could have been dreaming.

He felt butterflies in his stomach as he was put in front of the camera. He could see something in his wife’s eyes that he hadn’t seen in years.

His iconic words on the show were “She married me with nothing on my face, so I’m willing to go that far” it appeared they would respect that.

They tugged at the many layers, snipping away with their scissors. Everyone waited in anticipation. But how would he look at the end?

They took away his old denim overalls and put him in a stunning outfit that wouldn’t be out of place on a magazine cover.

He knew he could never have afforded something like this, but he said it felt amazing to wear. Then everyone saw the makeup.

He wasn’t allowed to look at a mirror beforehand.

All he could do was walk out when the curtains parted and see his wife’s expression. Here eyes went wide, and she started crying tears of joy. He turned around and saw the final result.

It was unbelievable. Not only had they cut away decades of hair, but they had also taken away at least 10 years off his face.

It was like looking at an entirely new person. But it was his wife’s next comment that made everything worth while.

Jeffrey couldn’t help but blush as he took his wife’s hand. Rachael Ray and the rest of the team gushed as the audience clapped and cheered with surprising enthusiasm.

Yes, he had been hiding behind his appearance for years.

Seeing the new person in the mirror made him wonder why he hid in the first place. It was also another reminder of how wonderful Lori was and why he had decided to spend the rest of his life with her.