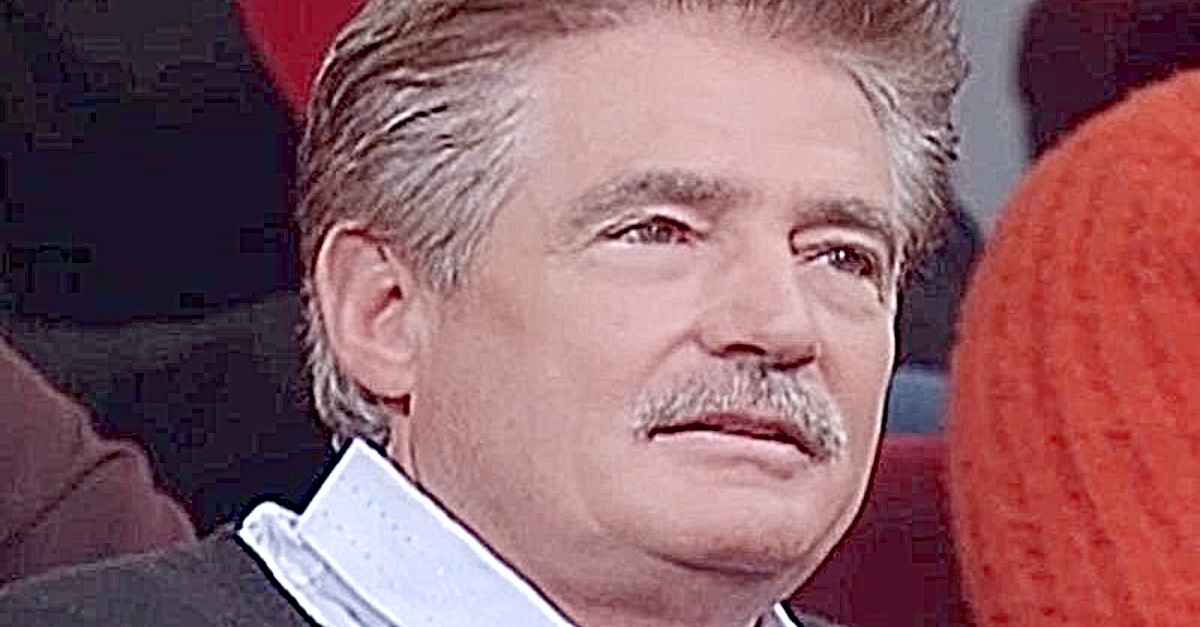 There are many people who are nasty for no reason at all. Perhaps they should have been told as children not to ‘cut off your nose to spite your face.’ When people do things just for spite or out of revenge it usually ends badly.

But one man’s spiteful antics have become something of a legend and definitely the talk of the town. In fact, he may go down in history. 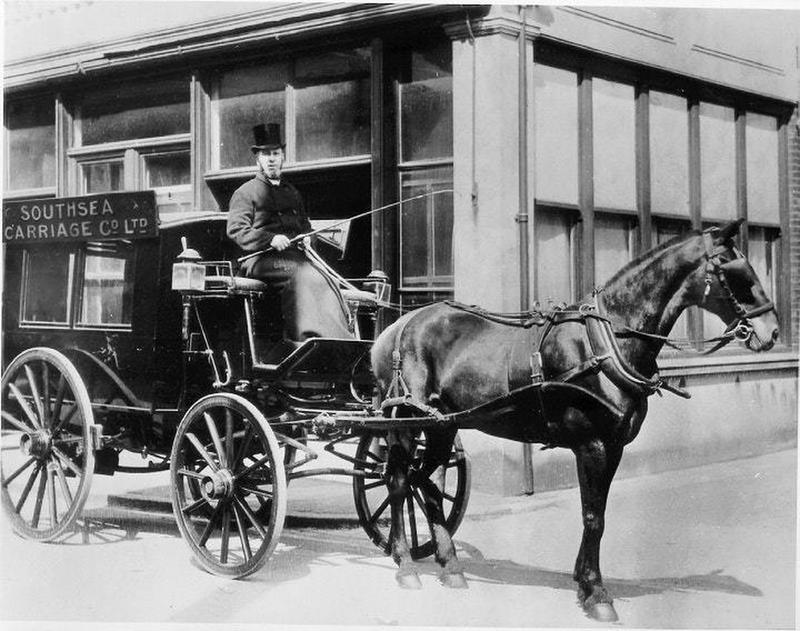 It started in 1830 when one man, John Hollensbury was in the habit of coming home from a hard day’s work. Like anyone he just wanted to spend a peaceful evening at home.

Instead, much to his ire, he was constantly being disturbed by the distasteful noise of loud passers-by, horse-drawn carriages, and sounds of bottles breaking. Finally, it became too much for him but instead of moving he did something unbelievable. 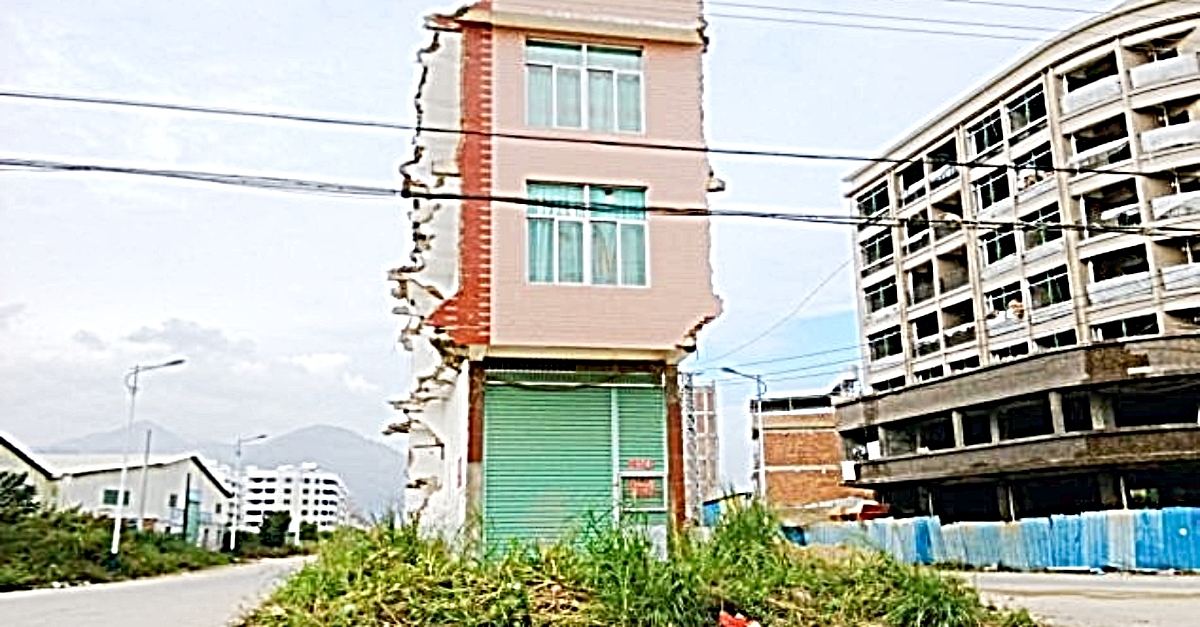 No one wants to live next to an alleyway. They are a great cause for concern for anyone anywhere around the world. It’s not only the constant fear that your home could get broken into, either.

The incessant rumble of people walking by, cars, horns, and in days gone by, carriages can drive someone half-mad. John Hollensbury, wondering if his plan was even legal was determined to make them all pay for disturbing his peace! 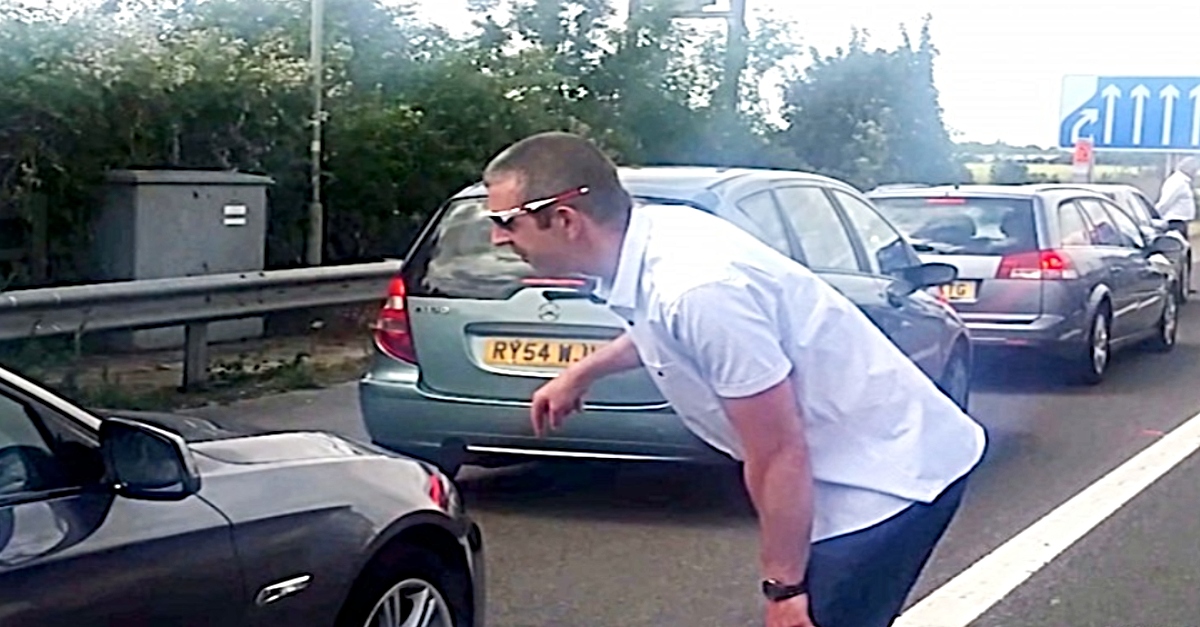 Unfortunately for Hollensbury, he was faced with a small problem. The alleyway was considered public property which meant he didn’t have permission to do anything about it at all.

Determined, angry and frustrated he decided to use his position of power as chairman of the council board to overcome this obstacle. This is where he would begin his devious plan. In doing so he would pull off one of history’s most elaborate tricks, and leave a mark on the neighborhood forever. 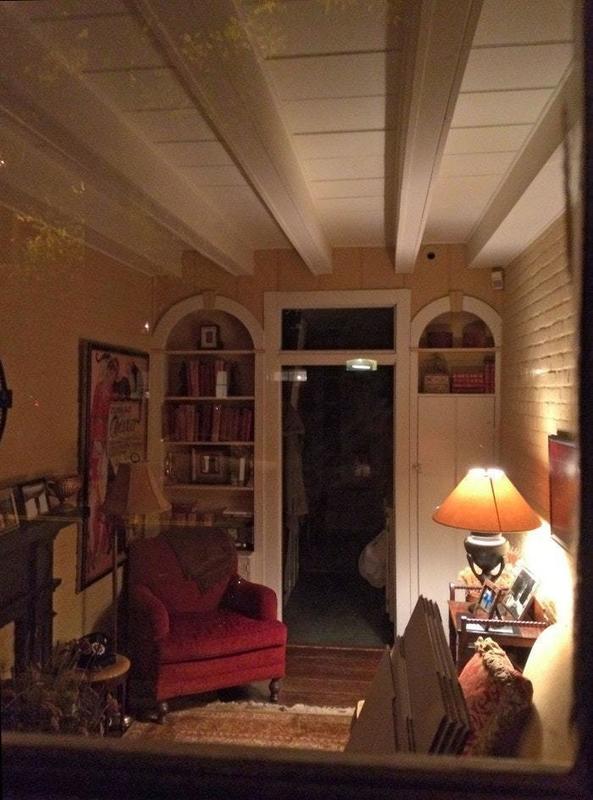 Hollensbury had two beautiful daughters whom he cared for and loved dearly. Being a doting father he always wanted the best for them. He was a successful man in his line of work and decided to spoil his daughters with a gift bigger than any he had given before.

They both adored the gift but everyone else in the neighborhood was less than thrilled. So what exactly had he done? 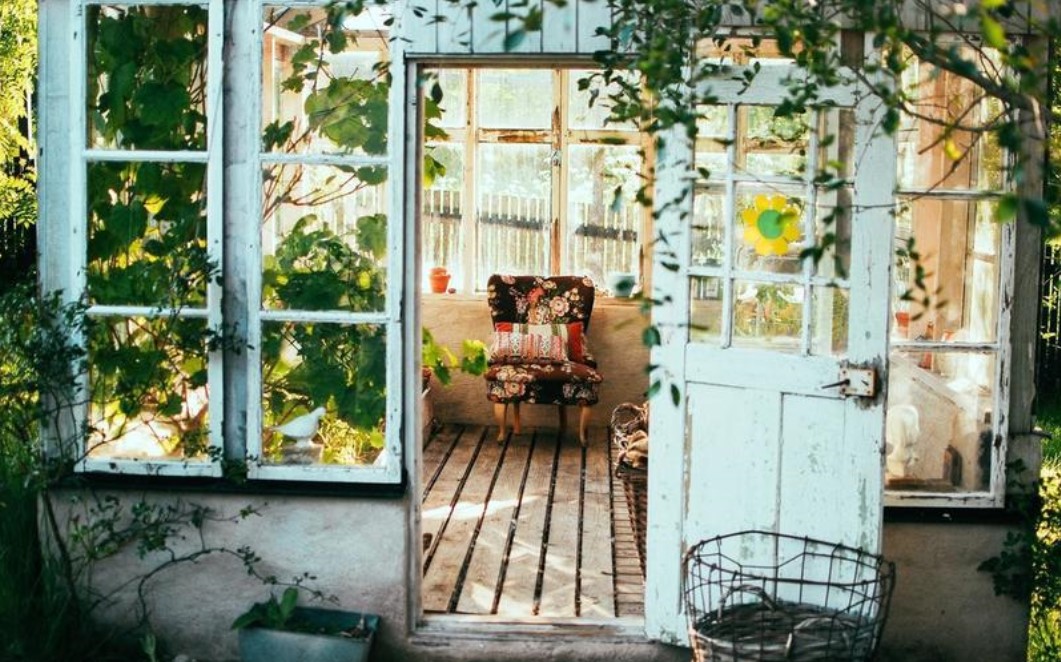 Well, the irritable man was in the business of brick making and so he decided that he would build his lovely girls a small playhouse. It was so enjoyed by the girls that Julia, his one daughter played house in it nearly every day and even lived in it for a period of time.

That made Hollensburg smile with pleasure. Notably, he still had a sly look in his eye, receiving a private sort of satisfaction that only he truly understood. 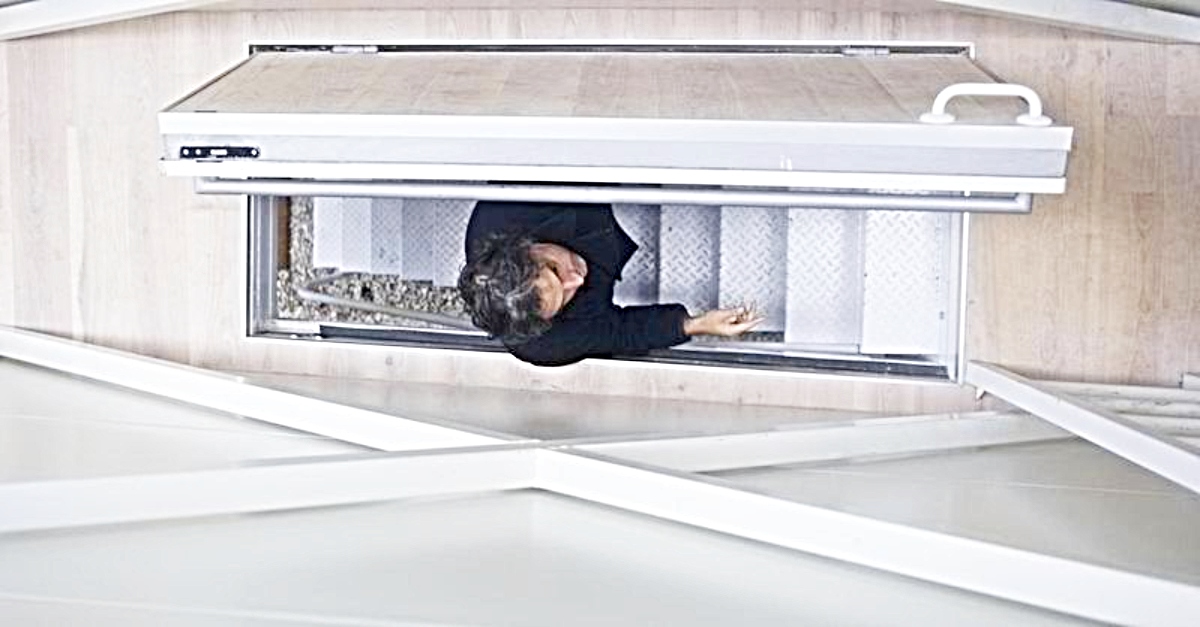 Nearly 200 years later and he would still be grinning in his grave. Not only had his plan worked when he was alive, but it continued lifetimes after him. In fact, now his little plan had taken on a life of its own and he was infamous.

His daughter’s dollhouse still stood exactly where he had commissioned it to be built. A place nobody would have ever considered. 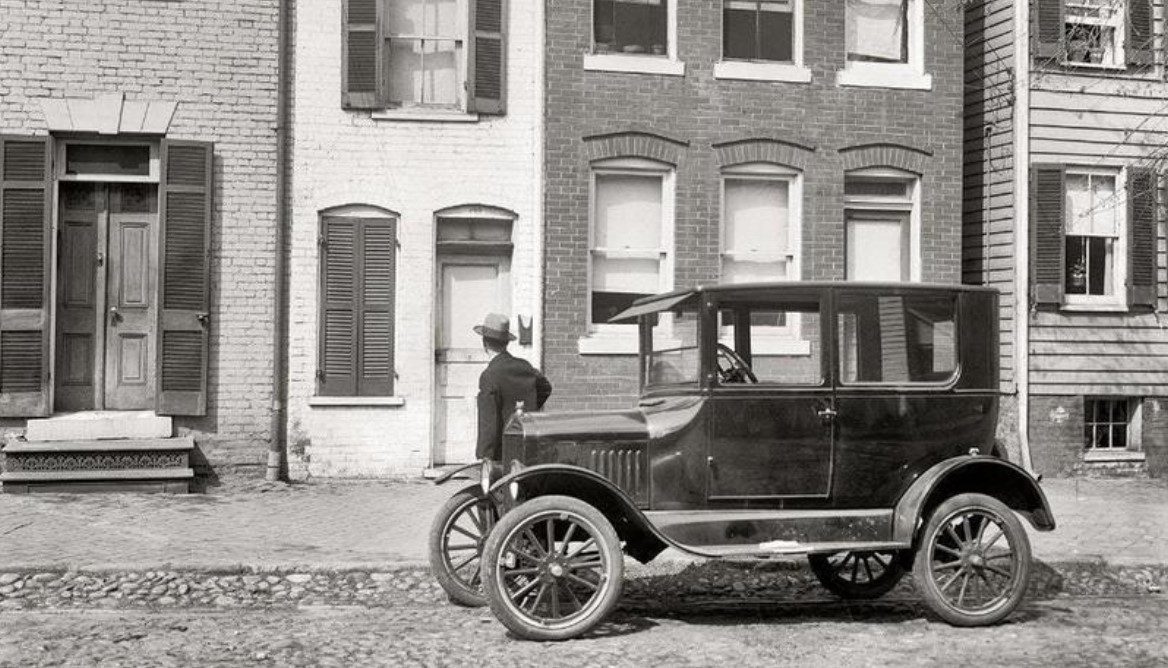 The doll’s house was close enough that John Hollensbury could keep a close eye on his precious daughters. So close that it actually shared a wall with the main building. It was by no means a small doll’s house either.

His two daughters could run around and live like it was a completely normal house. Except this house had a bigger reason than to simply dote on his daughters. This was ‘ The Spite House.’ 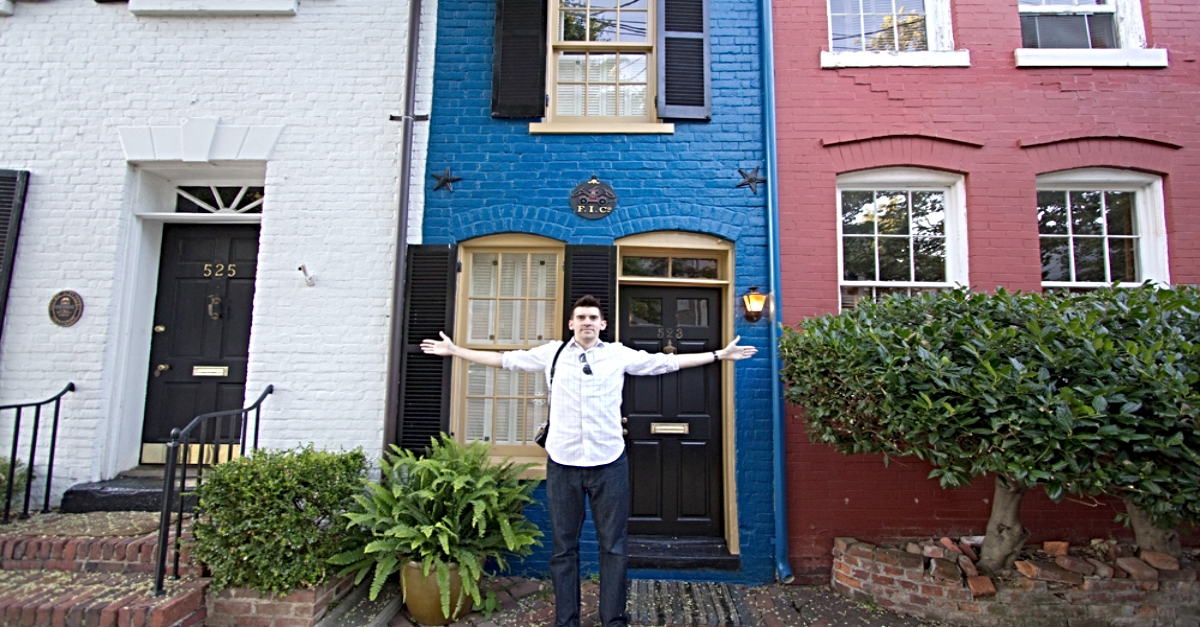 Now in 2006, Colleen Sammis, her husband, Jack, and friends were having dinner when they talked about the house that Jack owned. “The Spite House”. Having heard and read about the famous house it was astonishing to meet the owner and learn the history of how anger initiated the creation of this landmark.

When Jack Sammis saw that John Hollensbury’s house was up for sale, (a whopping 200 years after he plotted his revenge) he knew instantly that he had to buy it. Jack Sammis had a taste for “oddities” and in 1990 he purchased his beautiful home on Queen Street in the Old Town district in Alexandria, Virginia for $135,000. 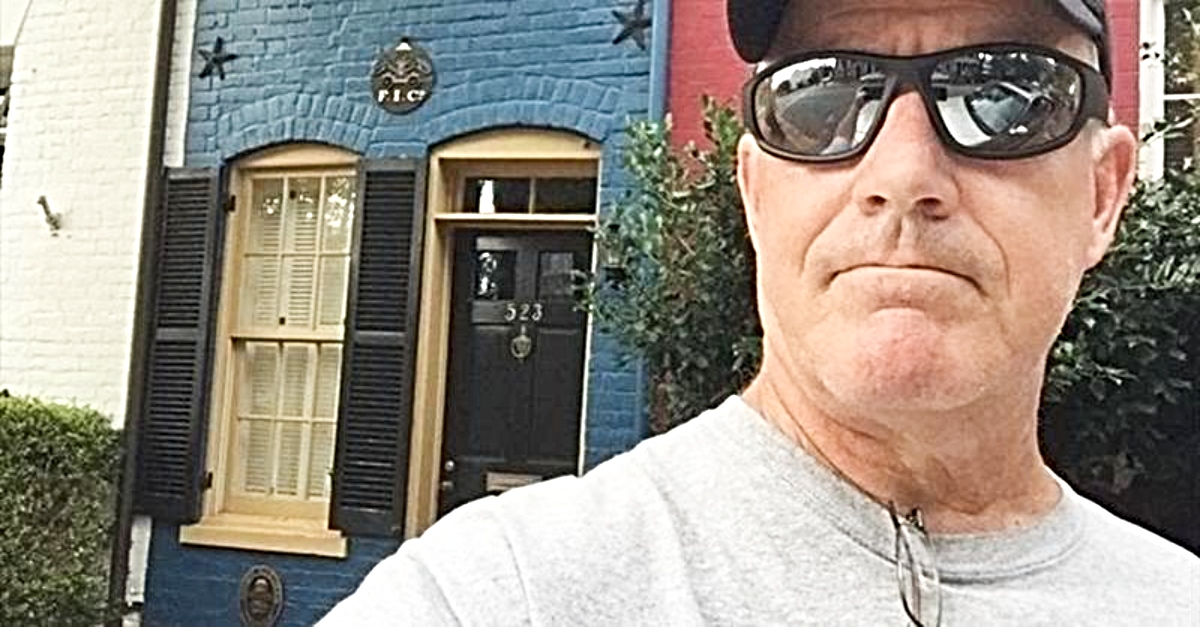 The tiny “Spite House” is spread between two stories and boasts a total of 325 square feet, is only 7 feet wide and 25 feet deep. Using the adjacent house’s wall to keep the structure together, remnants of the damage from the carriage wheels of the living room can today still be seen.

Could Sammis turn this sneaky result of anger and revenge into a livable space? 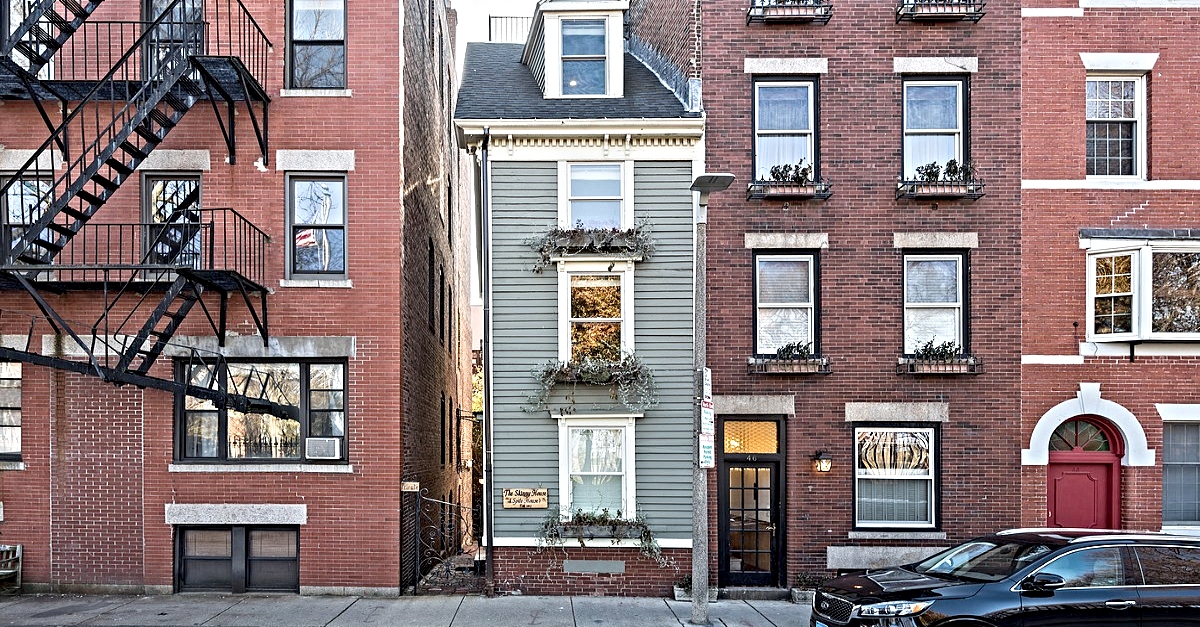 Many house flippers would advise that redecorating and fixing old houses can become huge complicated projects and eat away at your savings. Fully aware of this and the fact that he bought this tiny “Spite House” on a whim, Sammis was prepared for what was to come.

Now being the proud owner of the tiniest blue house in America and wanting to restore this historic beauty respecting its original structure, he says “I thought having something unique and historic would be fun.”

Calling In The Expert 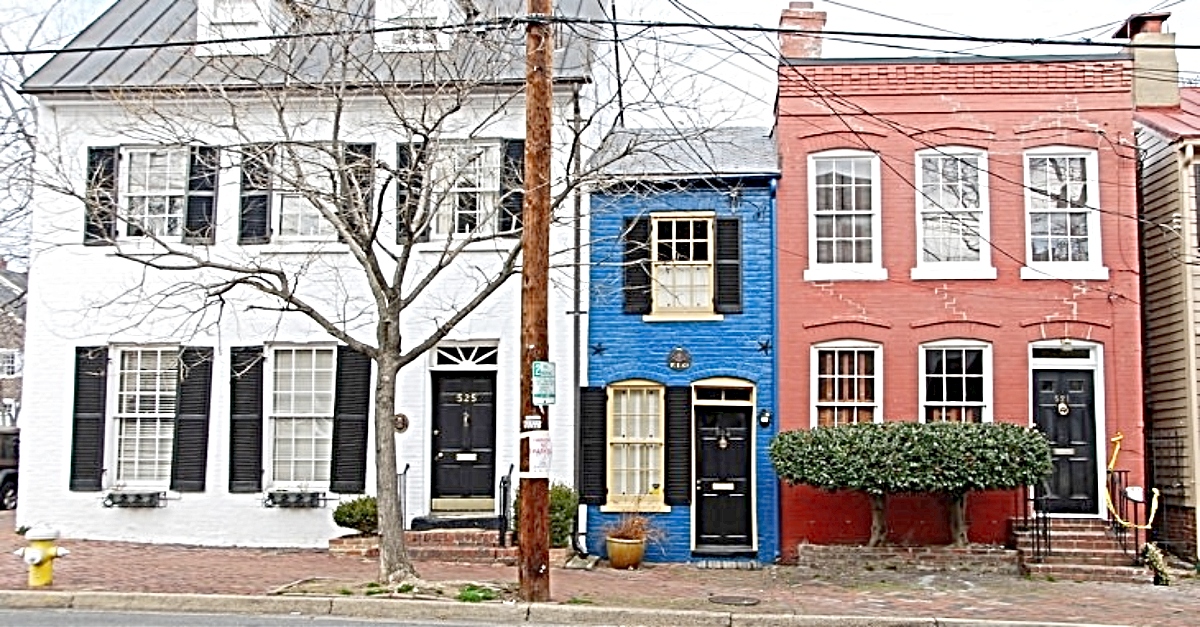 Fortunately, he had a friend Matt Hannan, who helped him to restore the outdoor patio and also had experience in this field, so he also helped him restore the interior. Their intention was to make every inch count and serve a purpose.

The media went into a frenzy when they heard that Sammis was about to attempt the restoration of the infamous “Spite House”. Even Oprah was allowed to bring cameras at the end of the project inside to view his humble abode and she dedicated a whole segment to his remarkable story. 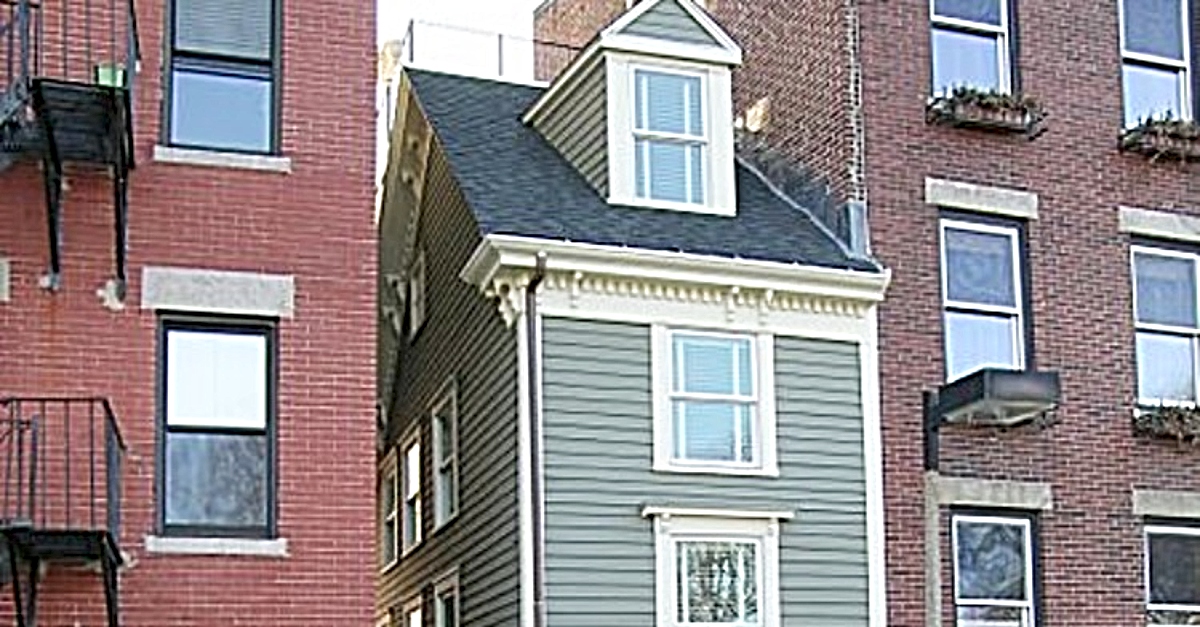 Mr. Sammis, with the help of Mr. Hannan, stunned everyone in what they were able to achieve as they managed to restore the house, transporting one back in time with an old historic feel to it.

One of the things Hannan did was to strategically move the heating and cooling system to a tiny attic, but he also played around with the furniture by installing space-saving cabinets, which allowed him to include a water heater and a washer-dryer unit he stacked on top of each other.
He was dedicated to redecorate it and simultaneously make sure that it resembled the period it dated back to. The results of their achievement were breathtaking. 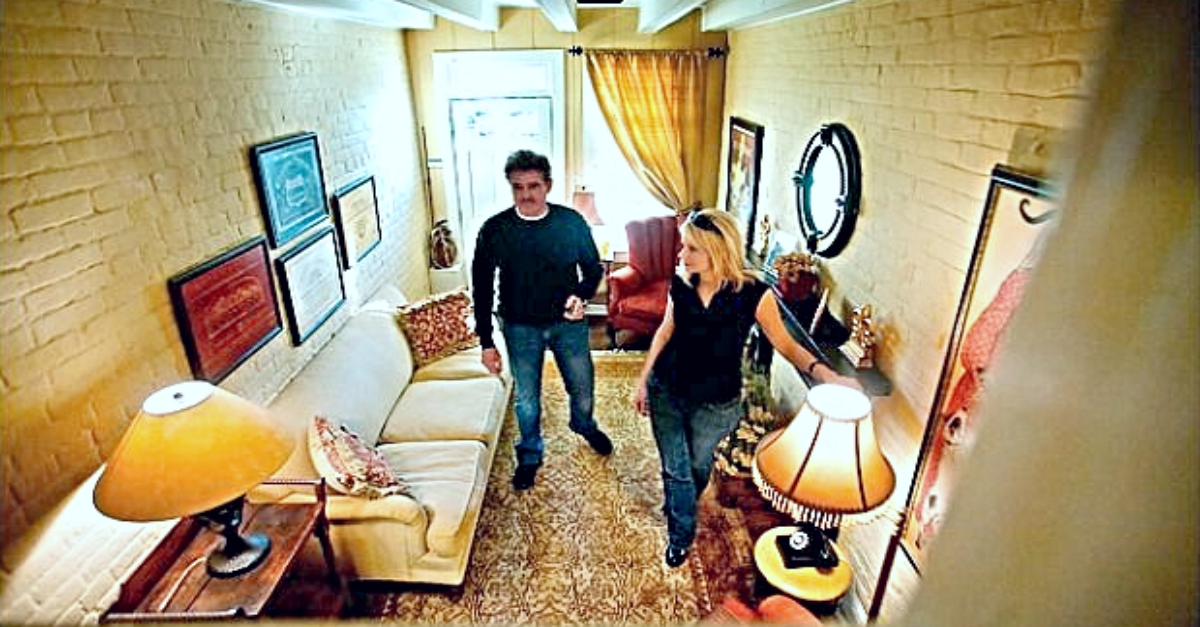 Cleverly, Hannan added period details and also highlighted original elements like the brick walls and the wooden floors but at the same time making the tiny narrow house more livable and efficient. He put a lot of thought into all the aspects of functionality.

With the size of the house resembling that of any sailboat cabin although it feels like an 1830’s house, Sammis comments that in fact he actually rented it out to a couple who were about to go on around the world cruise and wanted to see if they would survive to live in the cabin of a ship. Surprisingly they did! 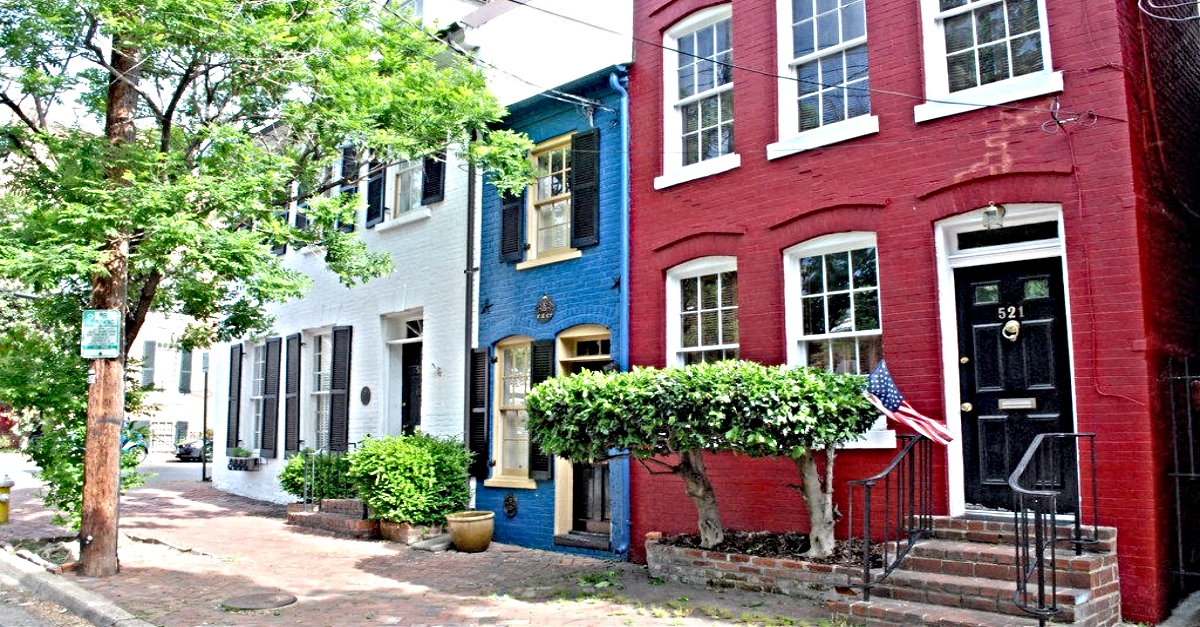 A unique feature was that the front door opens into the living room and this was welcomed and accentuated with a stunning regular size sofa facing a decorative black mantel. A quaint narrow, steep staircase invites you just beyond that leading to the second floor.

Tucked beneath the stairs is a small cupboard strategically placed to house a microwave. Opposite that you are met with a kitchen counter including a small sink, a small four-burner gas range, and an under-counter Sub-Zero refrigerator and freezer. 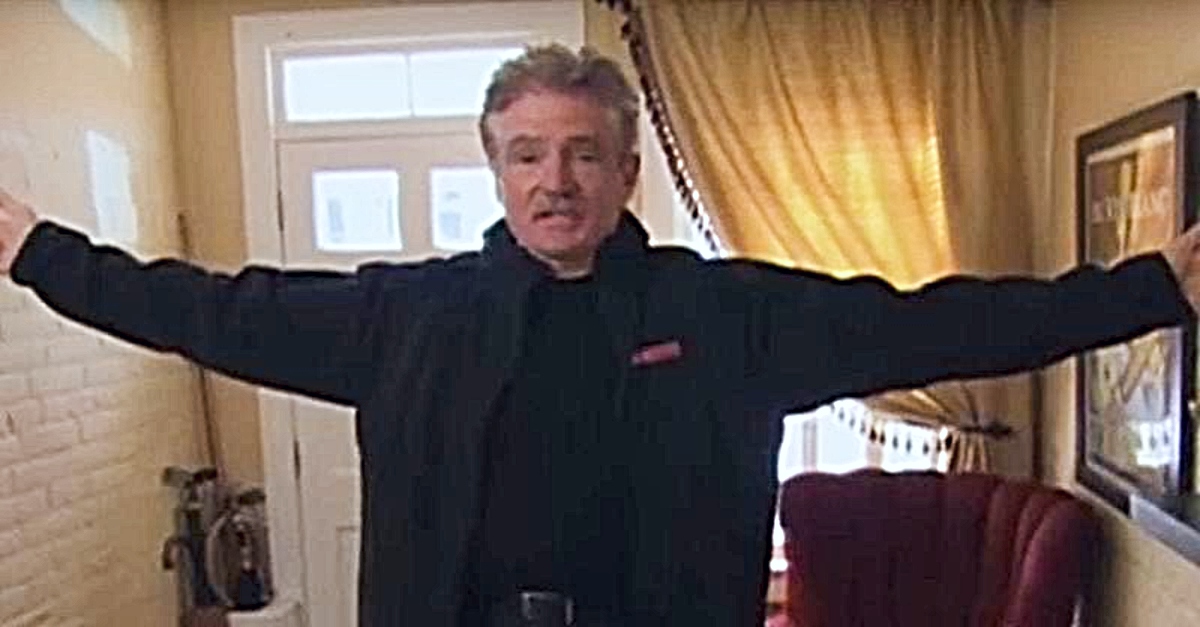 As the kitchen was one of the most important rooms for the Sammis it was important to make it fully functional and has all the necessary cooking equipment, kitchen facilities and storage space that became a comfortable reality.

Filling the rest of the kitchen was a wooden table pushed against the wall, with plenty of room to house the family of three to dine comfortably. Entertaining is even possible in that the table can be pulled out and reveals a built-in storage bench so four or more can dine together. 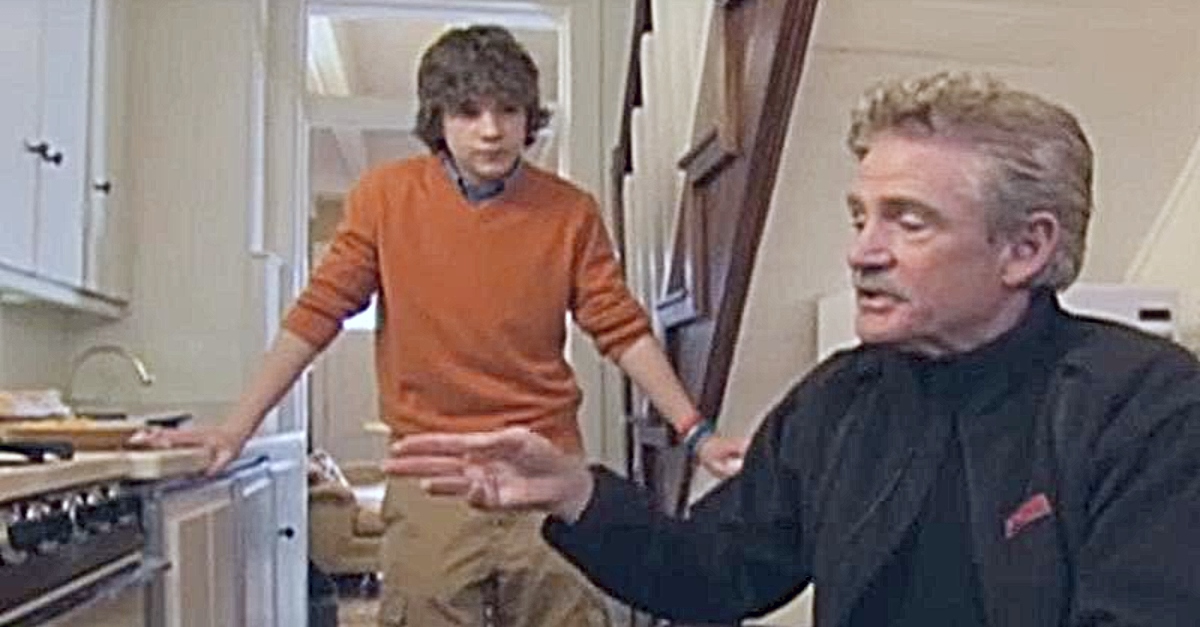 Mr. Sammis, his wife and 17-year-old son Jake doesn’t live there permanently but spends most weekends there, especially in summer. You can walk to the farmers’ market and there are plenty of restaurants and parks on the Potomac. In North Arlington, where they reside permanently, going out inevitably means driving. In Old Town, they can walk almost any place they want.

They spend as much time there as they can and have created some wonderful family memories there as well as entertained many family and friends. The tiny house can cater for hosting up to 12 people at a time! 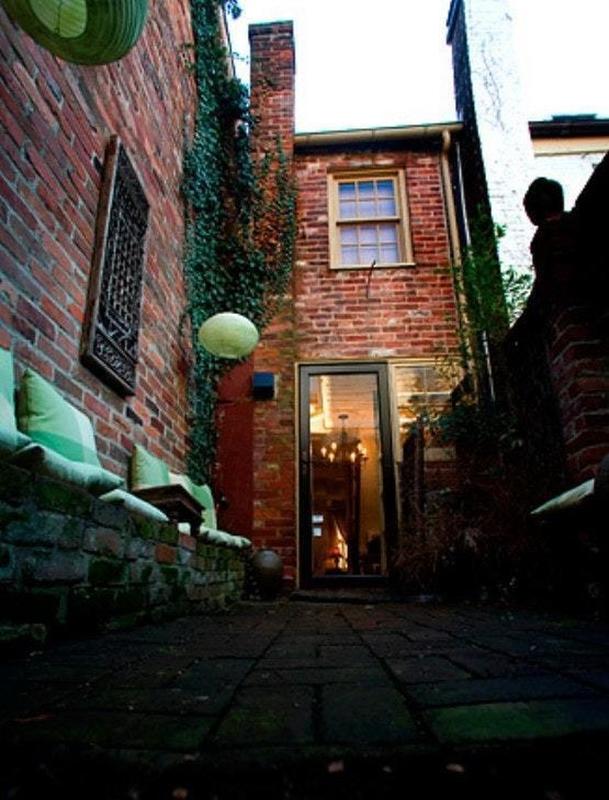 To Ms. Sammis, who is a commercial real estate agent, the little house in Old Town is her favorite. “I deal with commercial spaces, and this house is so different. “I love the idea of it — that something like this can exist”.

It makes the world a little more magical.” His son Jake, also enjoys the house and growing up his favorite thing was to watch the Washington Day Parade passing the porch and now find it a perfect place to do homework and practice cooking. 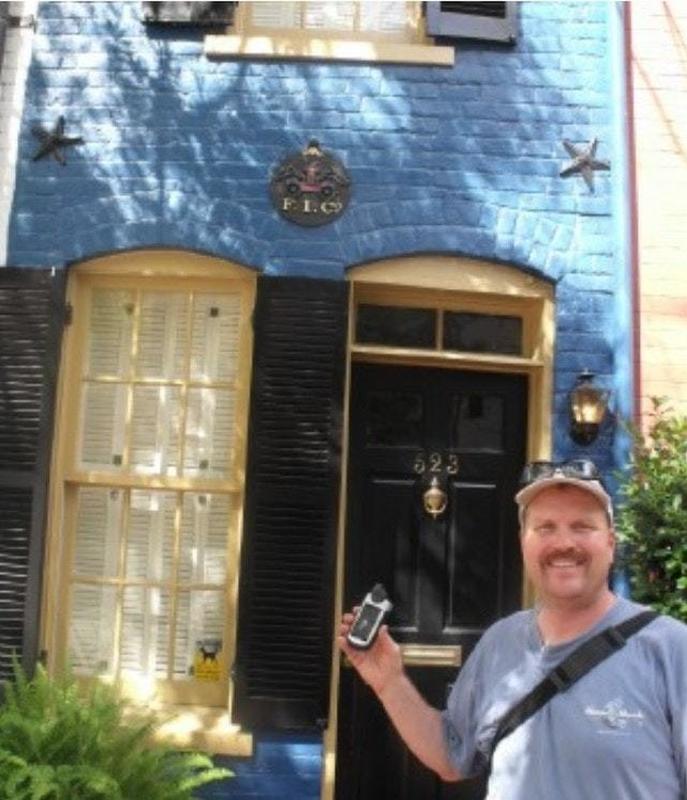 The upstairs living area is another whimsical retro fairyland. The bathroom boasts with a 1930’s ball and claw bathtub doubling up as a shower to save space. This allows them to accommodate a line of storage cupboards along a narrow hall beside the stairs. Featured in the bedroom was an incredible large single window overlooking the street.

A full-size double bed fits against the wall, but following Matt’s suggestion, he faces the opposite direction. Small painted cabinets line the window and hide a small television. Nothing was left out!

What Lies Behind The Door? 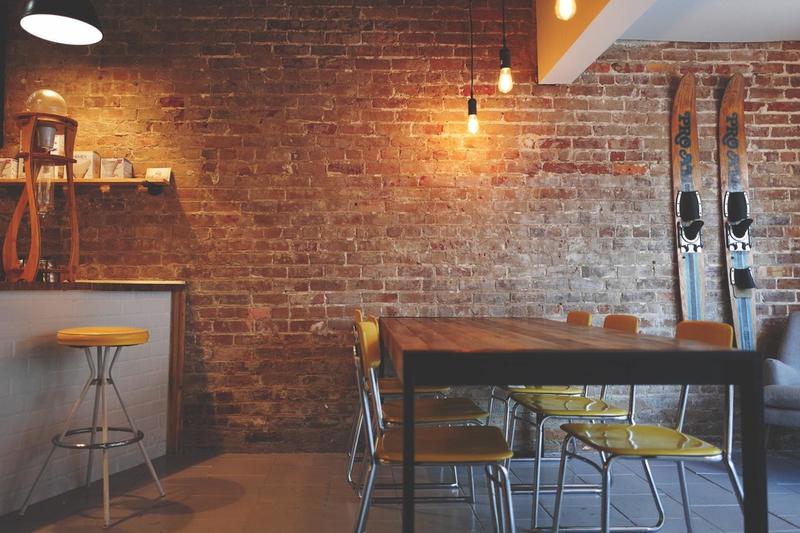 One of the main aspects of the house that caught Sammis’s eyes initially and pulled him towards buying it was the outdoor patio. At the rear of the kitchen, there is a door leading onto the patio.

The outdoor area is absolutely, beautifully magical and easily Sammis’s favorite spot. The cobblestones are covered with lush green moss and it has comfortable built-in seats and impressive greenery. It is the perfect setting to entertain when he has a few friends and family around. 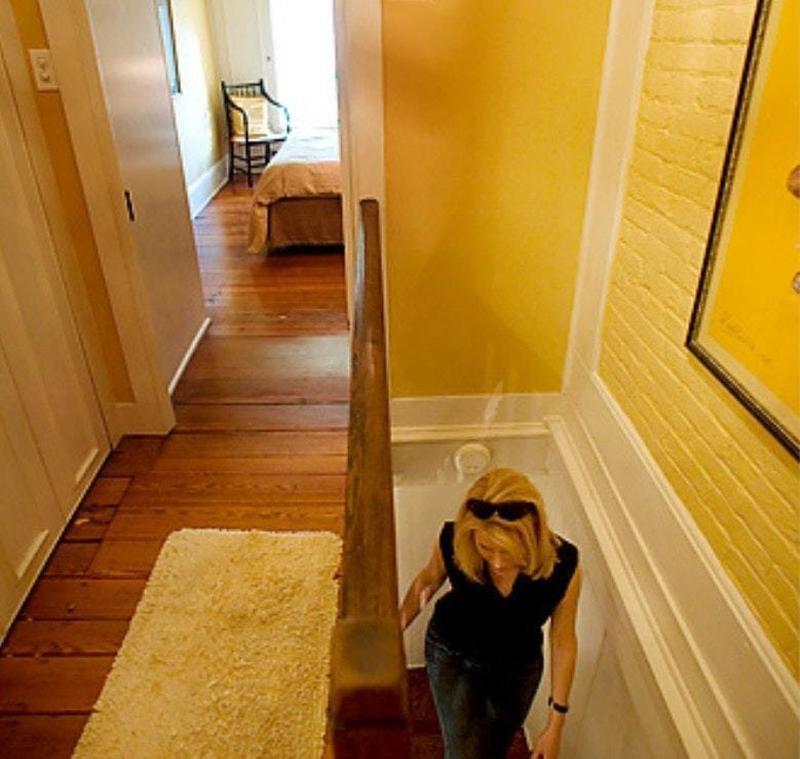 Outside, on this patio is possibly everyone’s favorite place. Whether it is reading a book, starting the day with a cup of coffee while watering plants, hosting a dinner party or enjoying a summer brunch. Clearly thinking that a tiny little hallway or mini backyard was inadequate for a patio was certainly disproved by Sammis’s impressive imagination.

Simply by adding some modern lights, a mini outdoor rug and hanging a myriad of plants and flowers could give it life. Sammis made it more inviting by adding a small wooden bench where people could sit. Simply by making use of the elements of nature and personalizing it with small furniture. 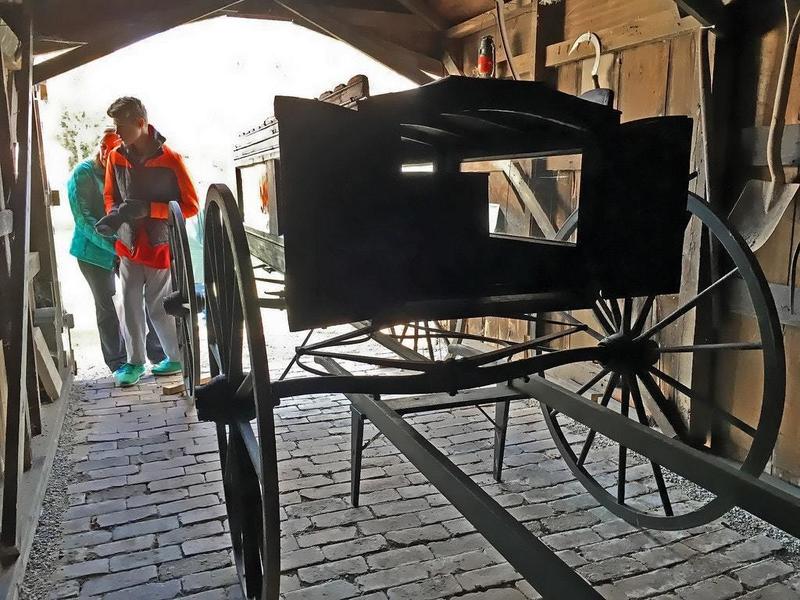 The residents of the town all love the house and the Sammis both enjoy introducing new people to their humble abode. Most of them express amazement and it brings an immediate reaction.

It’s become somewhat of a tourist attraction and there are even memorabilia like pictures on napkins and cards that show Old Town scenes. Viewings are also always included on the annual Christmas tour! 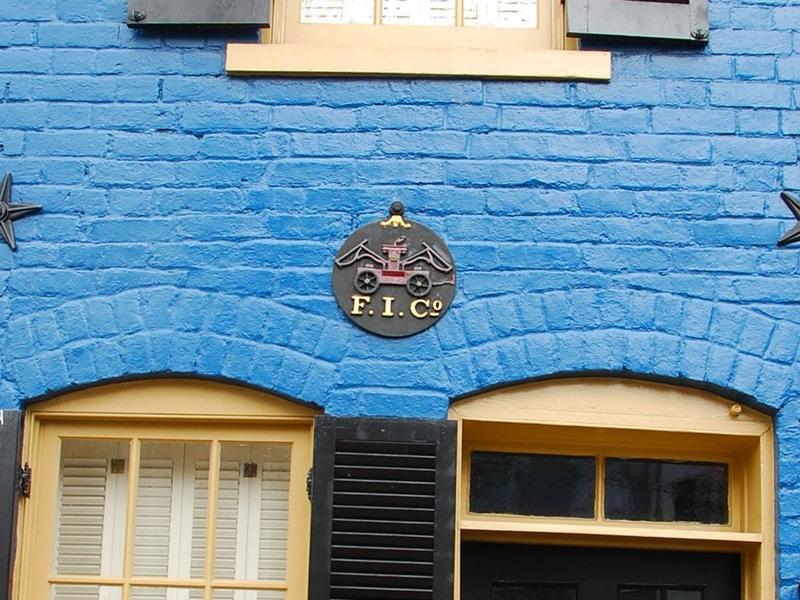 Worldwide it seems to be becoming a more popular tendency to go smaller. Those who have not lived in a confined space may find it intimidating accommodating their entire life to a tiny space. However, for a lot of others, downsizing and decluttering their lives tend to be becoming the norm.

This Spite House in Queens Street is a clear example of that. Before the renovations, some people may have gone as far as saying it was unlivable. This story makes one aware of the question; Just how much space does one really need to live comfortably?