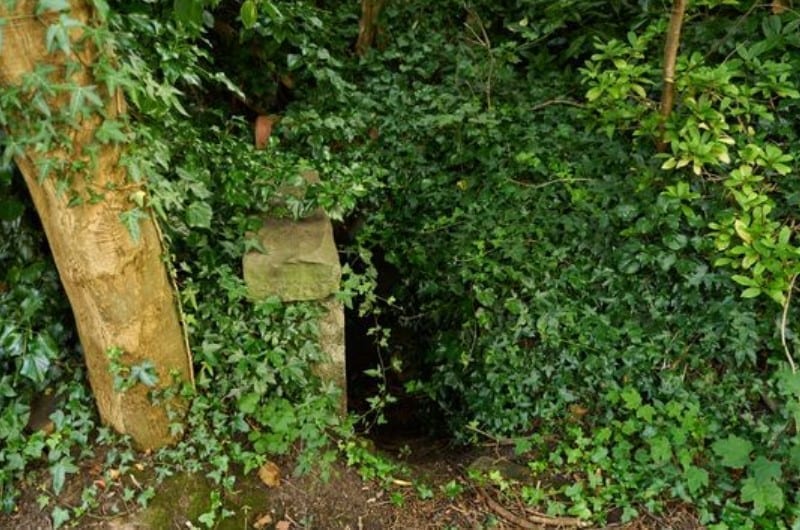 Slipping away from the dinner party, he let his feet take him down into the unkempt garden until he reached a wall of ivy. Noticing that the ground here sloped downward but seemed to lead to nothing, he began to look closer. When he parted the leaves, a wave of excitement rippled through him.

The hidden doorway at the bottom of the garden beckoned to him, but he had no idea that what he’d find inside would haunt him forever.

Kyle May from Liverpool began his love affair with photography at a young age. He spent most of his childhood pouring over his most prized possession — a book filled with vintage photographs from WWII. He didn’t know why, but something about these images caught his imagination.

He had an inexplicable feeling that these old photos held secrets that couldn’t be found in history books. But he never imagined that one day he’d stumble upon one of these secrets for himself.

Now that Kyle was 30, he’d built up an impressive body of work. He had successfully made a living out of photography. He worked his love of history and vintage photographs into his personal pieces, but he knew that he had to dial back on his creativity when it came to commercial work.

He’d done hundreds of photoshoots with local bands, events, and weddings, but he never forgot where his passion truly lay…

Kyle loved to wander through the streets of Liverpool with his camera by his side, his imagination running wild. He loved exploring the crumbling ruins of old buildings and abandoned places steeped in history.

When he investigated these long-forgotten places, he could almost feel the weight of the spirits who still lingered there — like a cold hand pressing on his chest. The thrill was something he sought out again and again. But Kyle’s biggest thrill was yet to come.

It all began when Kyle was invited to his friends’ house. After signing the lease agreement, packing up their lives, and moving into a new home, the couple had wanted to relax and celebrate the occasion by having a small get-together with friends and family.

But nobody had any inkling that there was a secret lying in wait at the bottom of the garden — least of all the house’s new occupants.

By mid-afternoon, the party was well underway. Drinks were flowing, housewarming gifts had been opened, and Kyle was ready with his camera — snapping photographs of the occasion.

Suddenly, his head began to pound and he decided to step outside for some fresh air. He had intended to spend just a few minutes outside, but he found his feet carrying him away.

Kyle found himself walking on the mossy flagstones and down the garden path. And, before he knew it, he had reached the bottom of the garden. The boundary was marked with a wall of ivy, but he immediately noticed that the ground had begun to slope down until it became a trench.

But where did it lead? When he parted the ivy, he couldn’t believe what he saw.

There, nestled behind the leaves, was an entranceway! Kyle’s heart began to race as he pulled the vines away from the structure, revealing a tunnel that had been built into the ground.

Rushing to his car to fetch a flashlight, he was excited to explore the mystery in his friend’s back yard — never realizing that this could be the worst decision of his life.

He arrived at the entrance, flashlight in hand, and took a deep breath before stepping inside. The damp old walls seemed like they would cave in on him any minute as his footsteps echoed down the dark passage. Kyle started to become all too aware of the massive crush of soil, pressing down from above.

Suddenly, the tunnel opened up and he could breathe again. But when he shone his flashlight onto the walls, his heart stopped.

They Had No Idea It Was There

Kyle ran all the way back to the house and told his friends what he had found on their property. The entrance was so well hidden behind vines of ivy, it’s easy to see why the homeowners may never have noticed it was there. He grabbed his camera and headed back to take a closer look.

He snapped photographs of the entrance, which was half-buried into the ground and set firmly in concrete. Then, he ventured inside once more to investigate the faces he’d seen.

Portraits of people had been drawn on the walls, and each one had an initial underneath. Who were these people? And why had the artist drawn them here? Kyle knew enough about WWII to know that he’d stumbled onto an underground bunker.

But who were the people in the portraits? His burning curiosity began to eat him alive. He had to find out who the people were.

The tunnel was known to many for the part it played in protecting factory workers during the Blitz. At that time, Liverpool was the country’s second most bombed city in the UK. However, the mysterious faces drawn on the walls remained a mystery.

The mystery was just too intriguing for Kyle to let go, so he began the long process of tracing the faces. Little did he know, he would come to regret his decision later.

When Kyle lay in bed at night, the mysterious faces haunted his dreams. His imagination ran wild with speculations. A year went by with no leads, and the mystery was slowly consuming him. He’d poured through the old newspapers at the library and had found nothing.

He was just about to give up the search when he had another idea.

“It was a proper mystery, no one knows who painted them or who they are,” Kyle explained.

“But I noticed one of the faces had the initial U next to it and I thought there are not many names that begin with a U so I signed up for a free trial on Ancestory and started looking for people from that time with a name beginning with that letter.”

After a lot of research, Kyle managed to narrow down his search to two possibilities. Finally, he was close to unraveling the mystery that plagued him. Eventually, one lady was left who seemed to fit the bill.

“She’s a lady called Ursula Lois Forshaw,” Kyle said. Now, all he had to do was make contact.

“My search said this person is in somebody else’s family tree and I managed to find him on LinkedIn as he’d stopped using Ancestory a while ago,” Kyle explained.

“I said to him ‘I think this might be your auntie’ and he contacted his brother to check. Then I got an email saying ‘I’m sure it’s my auntie’. ”

“She was in the Women’s Air Force,” Kyle revealed, “I’m pretty sure she’s the girl in the picture but there’s no way of knowing for sure. Her nephews were the only relatives alive that were on her family tree.”

But one question still remained: Why had the portraits been drawn onto the wall of the bunker?

Kyle’s amazing photographs show the mysterious portraits of men and women wearing helmets. Some experts have suggested that their quality and rushed, crude style means that they may have been painted from life, possibly to entertain the shelter’s occupants during the wait for the all-clear during the blitz.

But other researchers have another theory…

More research into the enigmatic portraits has theorized that they are sketches of the people who worked at the factory nearby. And a year later, Kyle is still trying to find out who the faces belonged to.

He added: “I don’t know if there are any plans for the shelter but I got in touch with the council to discuss the possibility of opening them up as a tourist attraction and making sure they’re protected.”