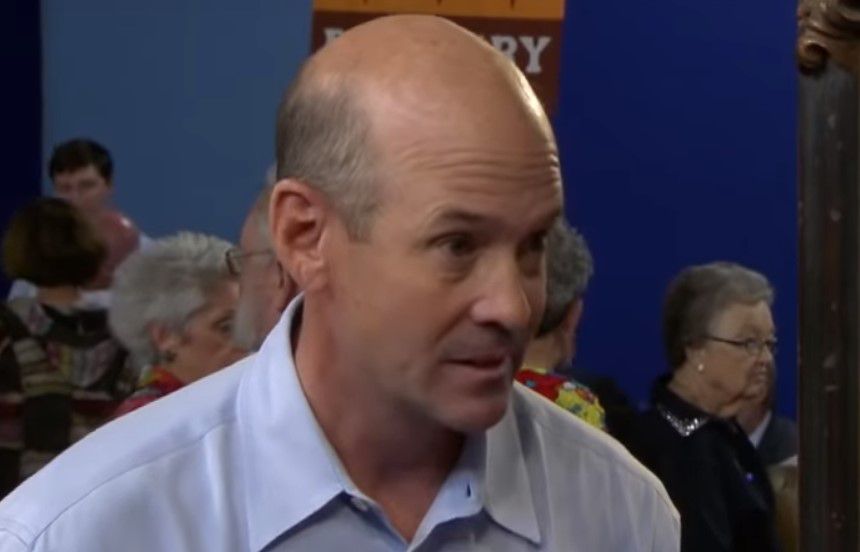 This moment could make or break him, so he listened carefully to what the appraiser had to say.

When the words left her mouth he blinked in astonishment. Could it really be the famous lost masterpiece? The secret had been hiding in that face all along, but why had nobody else seen it? He stood stock still and hung on her every word, but he had no idea that he was about to have his mind blown by what she revealed about the dusty old portrait. 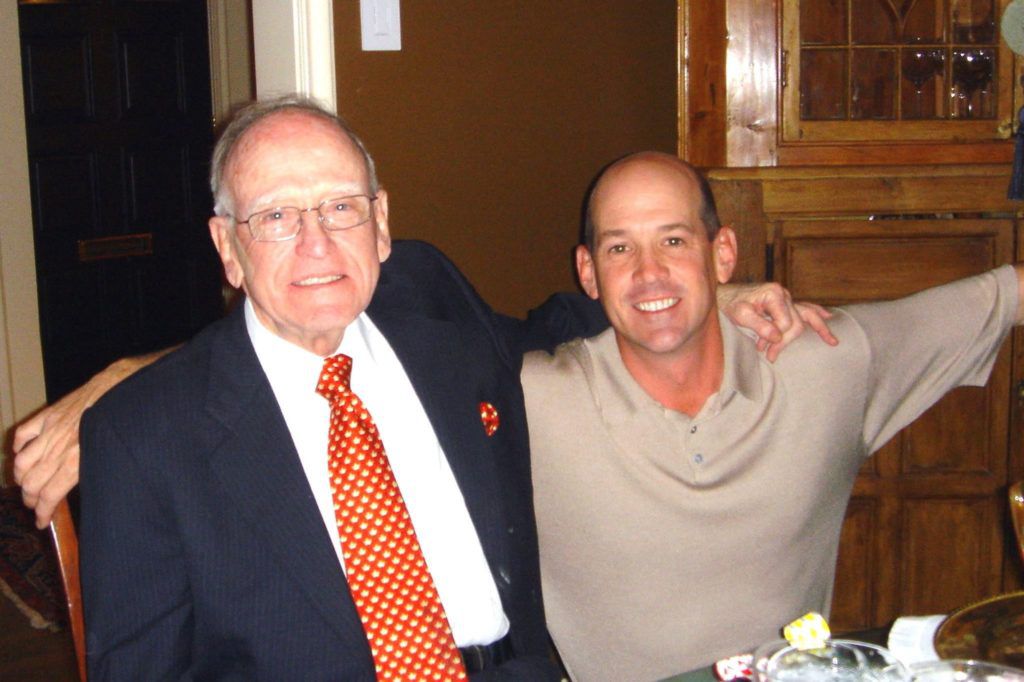 Rue Ferguson of Texas was no aficionado of art, but he knew what he liked. And he definitely wasn’t thrilled with this old painting that had wormed its way back into his life. It just made him…uncomfortable. He didn’t know how to feel about it, really. He was both drawn to and repelled by it, although he couldn’t explain why.

Had he known the history of this particular painting, he might have thought twice about bringing it into his family home. 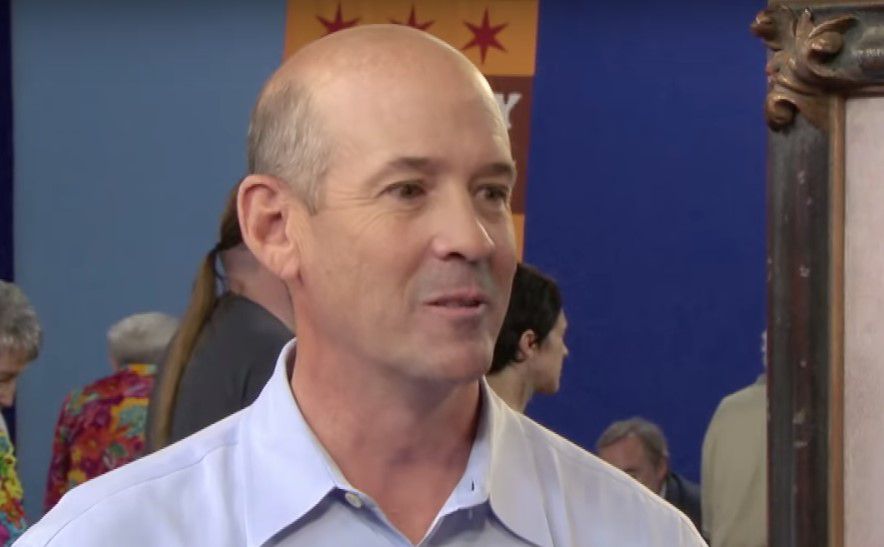 Rue knew that the painting had been handed down for generations, but he knew little more than that. It had been mysteriously acquired by his great-grandparents in the 1940s, but why, he didn’t know.

When it was passed down to him, he accepted it graciously–it was, after all, an heirloom, and he put it into storage and forgot about it. 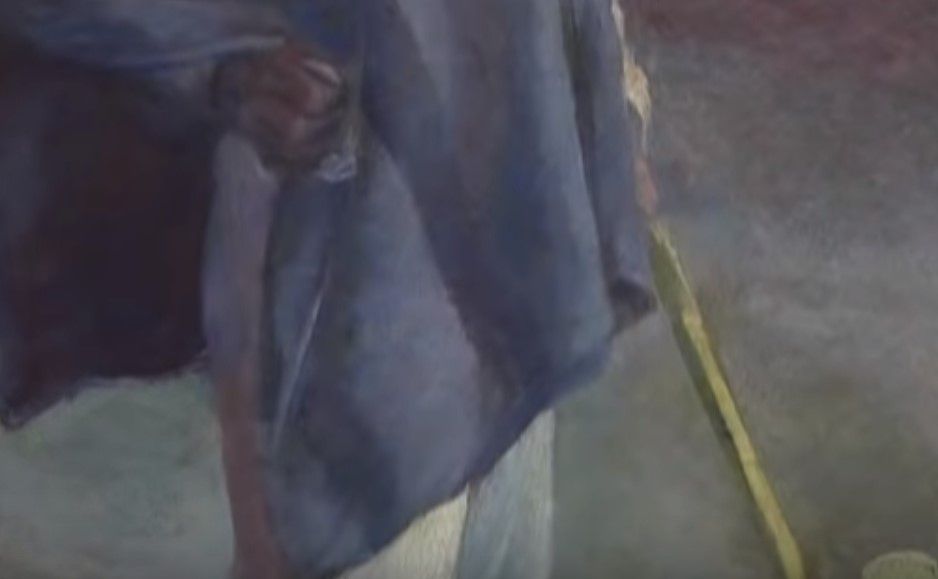 When Rue married and moved to a bigger home with his wife, the painting came out of storage once again. It was large and clashed with everything, so the only solution was to hide it.

The man in the painting stared at him accusingly from where he hung it out of sight–behind a door in his office where it could gather dust. And there it hung until Rue was inexplicably drawn to it again, years later. 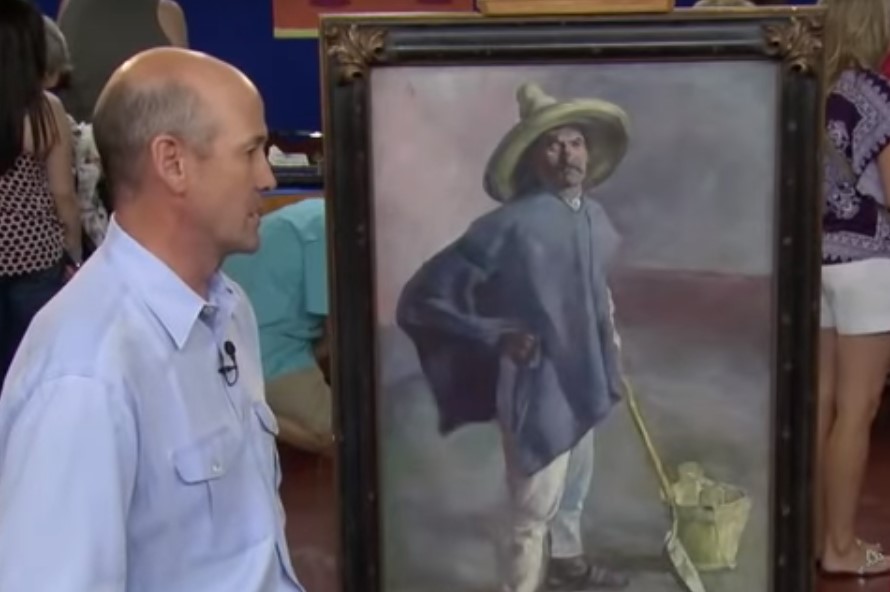 One day, Rue found himself motionless, staring at the painting. It depicted a man wearing a loose white linen suit, brown leather sandals, and a wide straw hat. The man in the portrait gazed back at Rue with a frown–his stern, unsmiling mouth forever poised in an almost bitter expression.

Suddenly, Rue had a strange feeling. 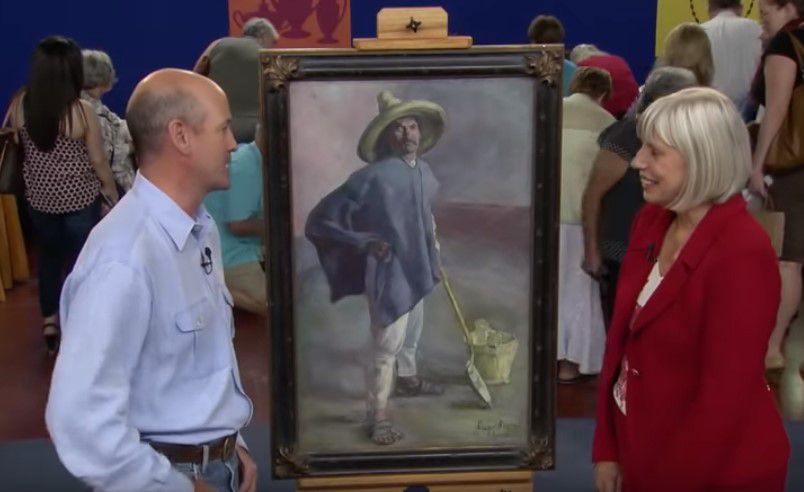 He felt along the painting’s surface, scraping all the grooves and whirls with his fingertips. He could feel the artist’s brushstrokes distinctly…It certainly felt like it had been painted with oil paint. 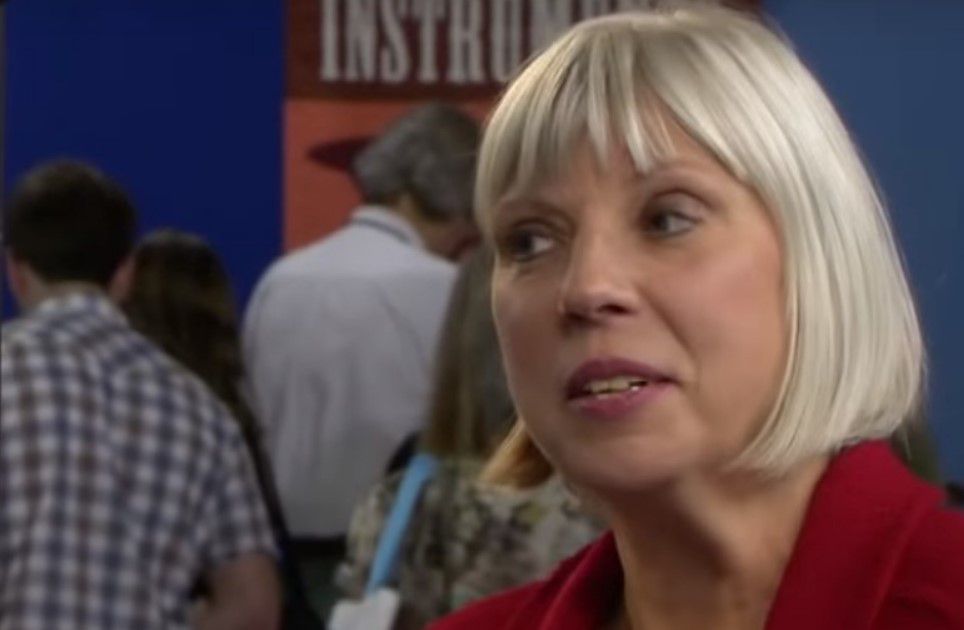 Rue impulsively bundled up the painting and hauled it to the where the popular reality show, Antiques Roadshow, was filming in nearby Corpus Christi, Texas. It was there that appraiser Colleene Fesko leveled her expert opinion on the piece.

What she had to say about the mysterious painting left Rue at a loss for words. 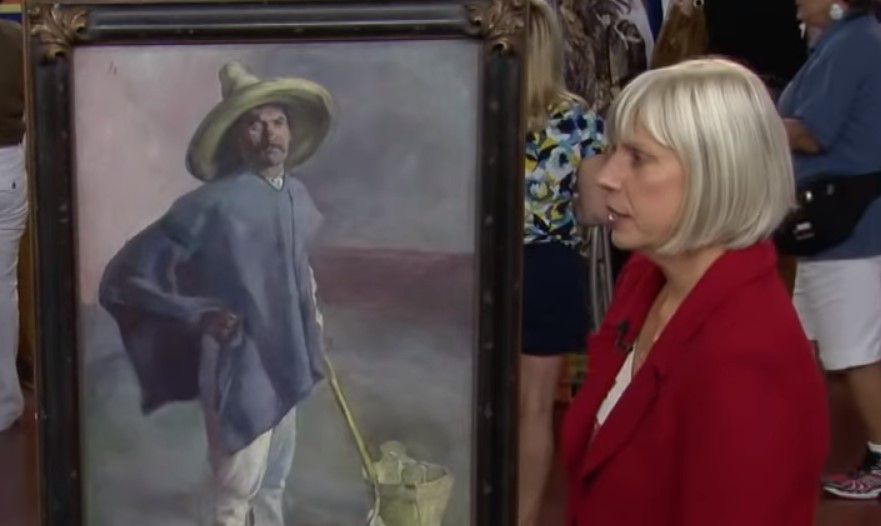 Unbeknown to Rue, his father had already had the painting appraised in 1998–over a decade earlier. A curator at the San Antonio Museum of Art (SAMA) had told him that the signature was irregular and didn’t match other signatures on the artist’s other works.

But, in a strange twist, therein lies the true value of the painting. 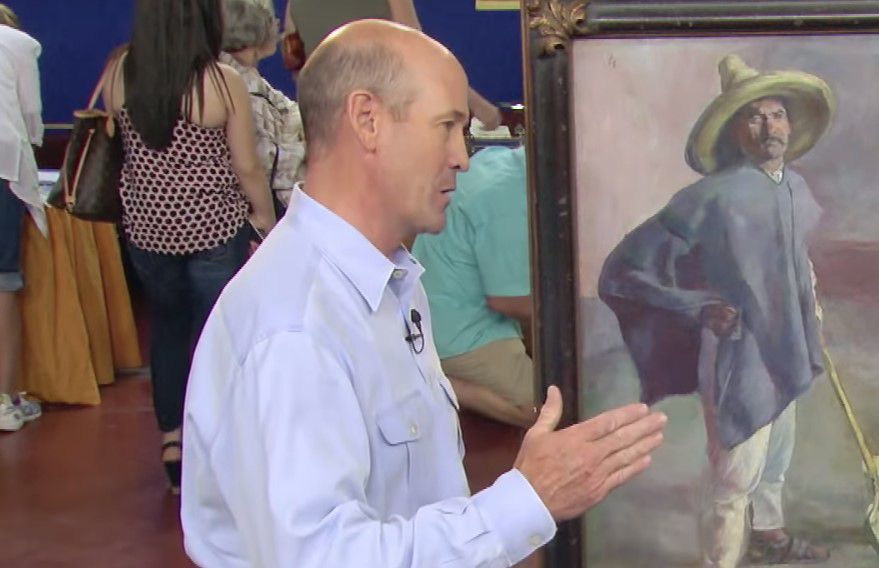 Colleene Fesko had a different opinion about the heirloom painting. It had been hastily written off as a fake by experts at the San Antonio Museum of Art due to the irregular signature scrawled on the bottom right-hand corner.

Colleen pointed to the signature and started to unravel the painting’s deep mysteries as Rue’s eyes grew in astonishment. 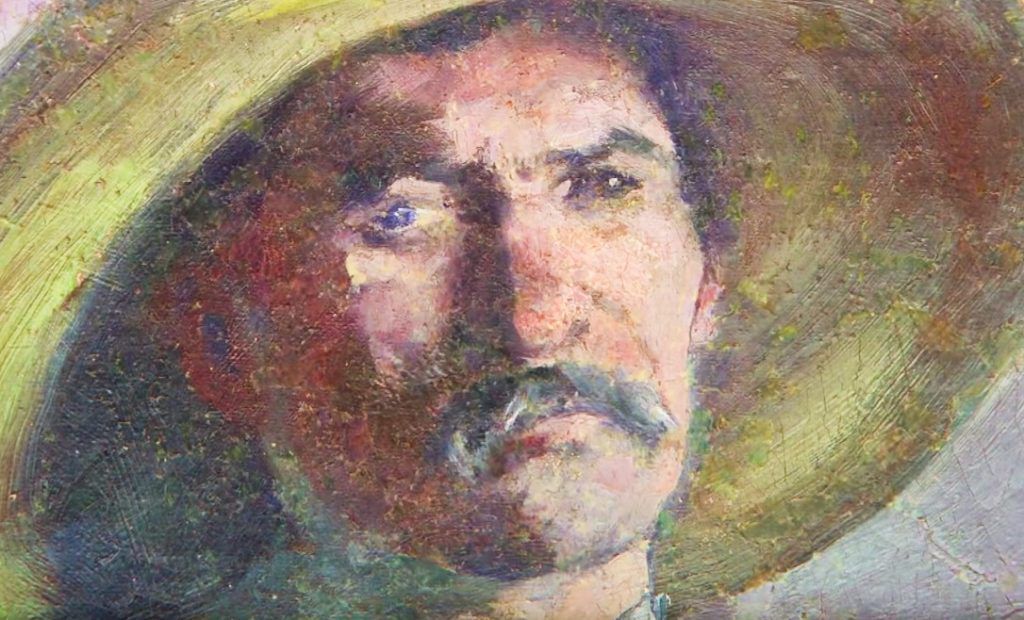 Colleene Fesko carefully looked at the painting and she was immediately struck by the irregular signature.

She raised her eyes to Rue’s and said the words he had never really expected to hear slowly and with deliberation, “Well, there are two extraordinarily intriguing words in an artist’s catalog of paintings…” she began. 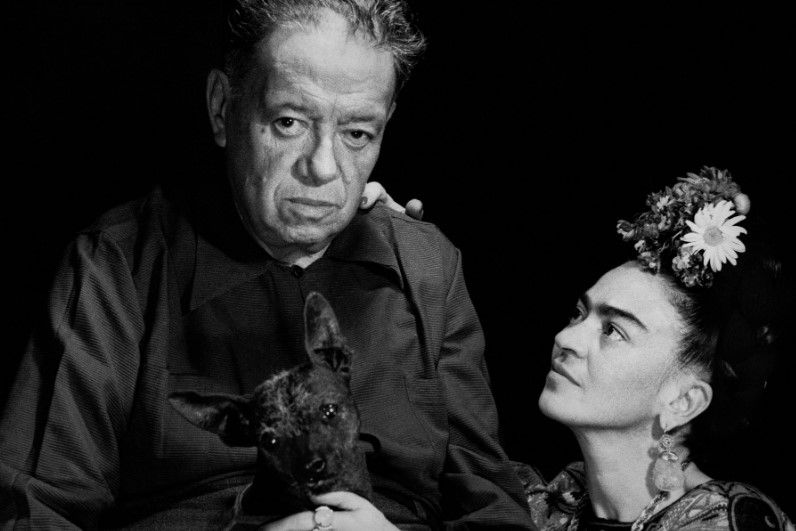 “And those words are ‘whereabouts unknown’,” Colleene continued. Rue held his breath, hanging on her every word. “My understanding of the painting’s history is that it was painted in 1904,” she continued, pausing for effect, “…by Diego Riviera.

And at that time, Diego Riviera, who was arguably one of the most important Latin-American 20th Century artists, was only 18 years old.” 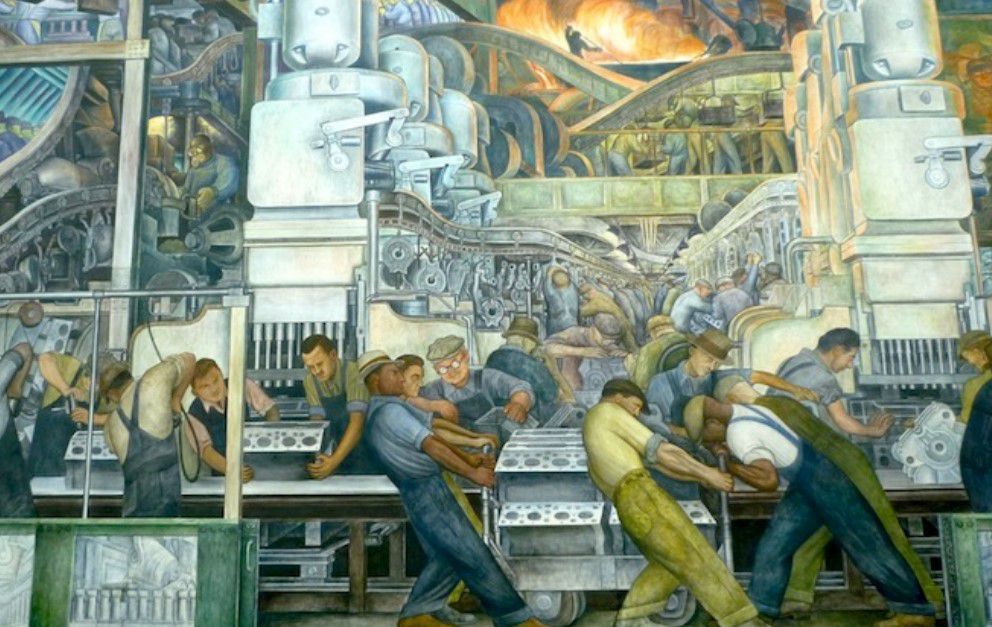 Waking Up The Ghost

Rue felt the air leave his body as he listened to Colleene’s expert opinion. “And there were, I think, only three or four paintings known from that early time…the painting is signed here as ‘Diego Riviera’, 1904.

And what’s interesting about the signature is it’s a very young man’s signature.” 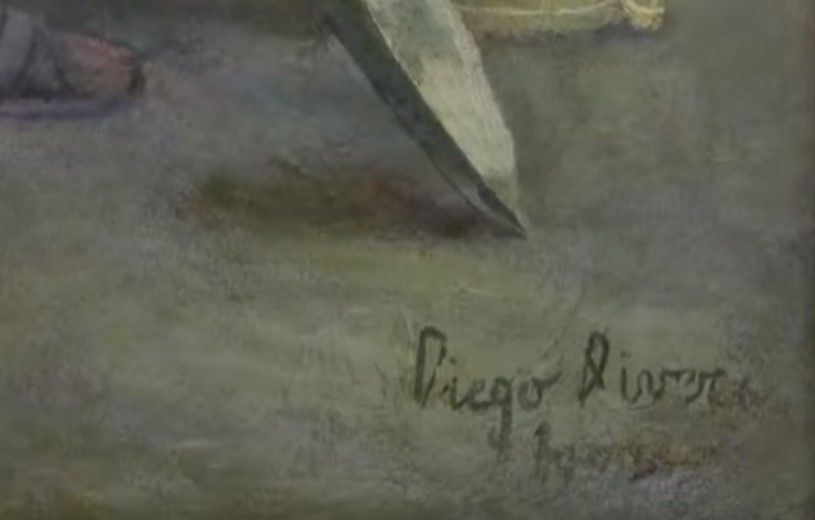 When Rue’s father was alive he had become obsessed with the painting. He greedily read every autobiography and paper ever written on the hedonistic Mexican muralist. He became consumed by the painting, but he was most interested in the artist’s role in the Mexican Revolution. That stern face haunted his dreams and nightmares.

The painting was authentic, he insisted. Would he finally be vindicated now, years later? 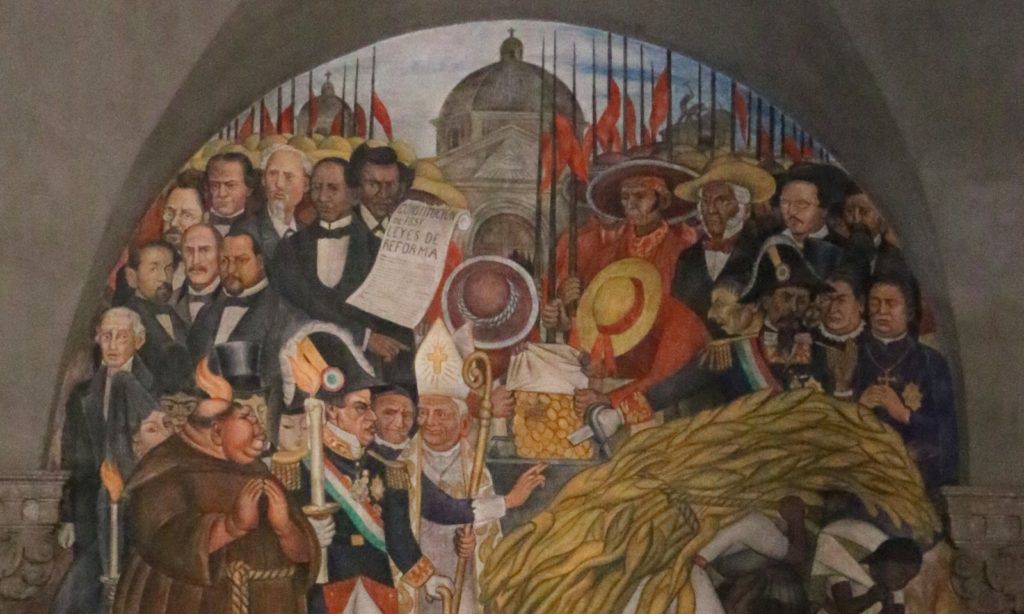 Diego Riviera was considered to be one of the most important political artists of the 20th Century, and it’s easy to see why. His works often depicted the workers of Mexico–the brick-layers, laborers, and farmers who Riviera considered to be the true backbone of society.

His works are considered to be national treasures in Mexico today. But how had Rue’s great-grandfather come to have the painting?

Fearing For His Life 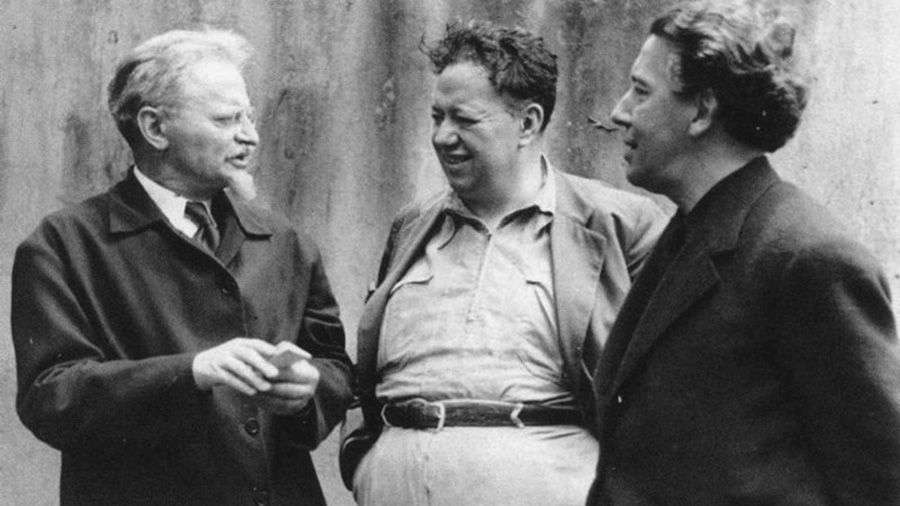 Diego Riviera was well-known for his political involvement, which meant he often feared for his life. Delusion and paranoia, or truth, his experiences were rattling. And his nightmares began in earnest in 1937, when he hosted Leon Trotsky, the Russian Revolutionary, in his and then-wife Frida Kahlo’s home after he was exiled due to his anti-Stalinist views. It was then that Riviera and Trotsky set up a Joint Commission of Inquiry into the Moscow Trials.

Then, signs that Stalin’s long arm had reached Mexico started to appear. 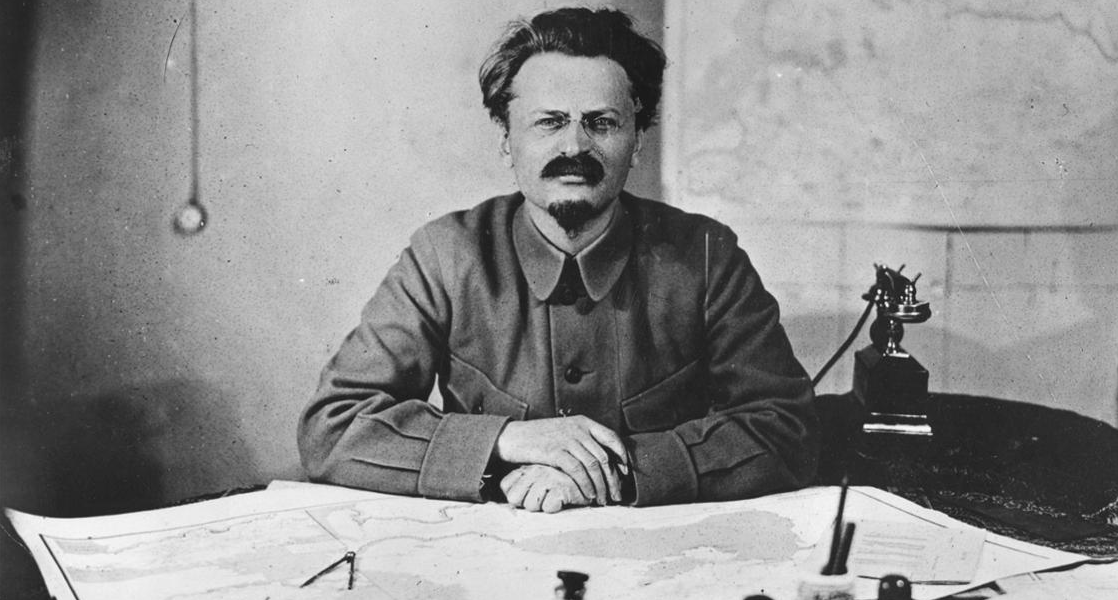 Trotsky was assassinated three years later in Mexico City, in the Coyoacán neighborhood, a stone’s throw away from Riviera and Kahlo’s home. Riviera was convinced that the assassination was orchestrated by Stalin himself, and he was sure he would be the next target.

Late one evening, Riviera was working late to finish a portrait of actress and wife of Charlie Chaplin, Paulette Goddard, when he was disturbed by a strange sound. 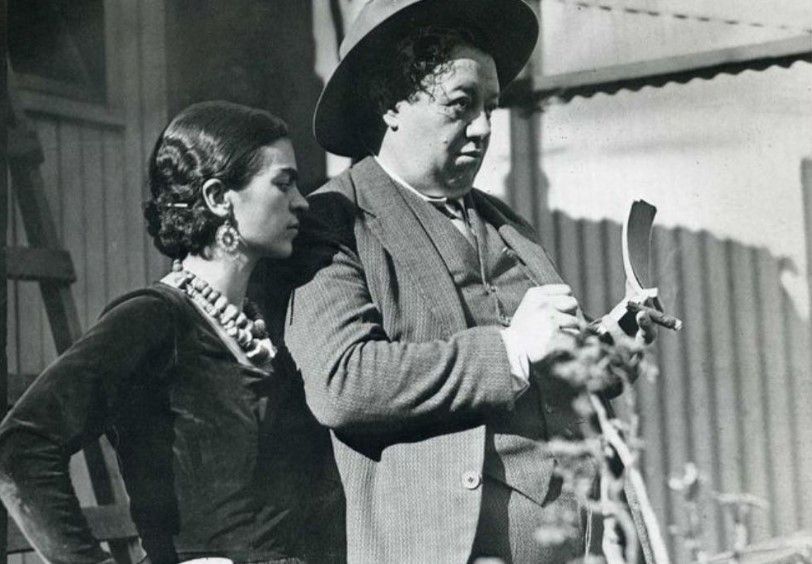 Riviera and Goddard heard the screeching of brakes in the street outside, and Goddard rushed to investigate. She was shaken to find that there were several cars filled with suspicious-looking men, and they were carrying guns.

She dashed around the corner and to the nearest phone booth to warn Riviera, just in time. 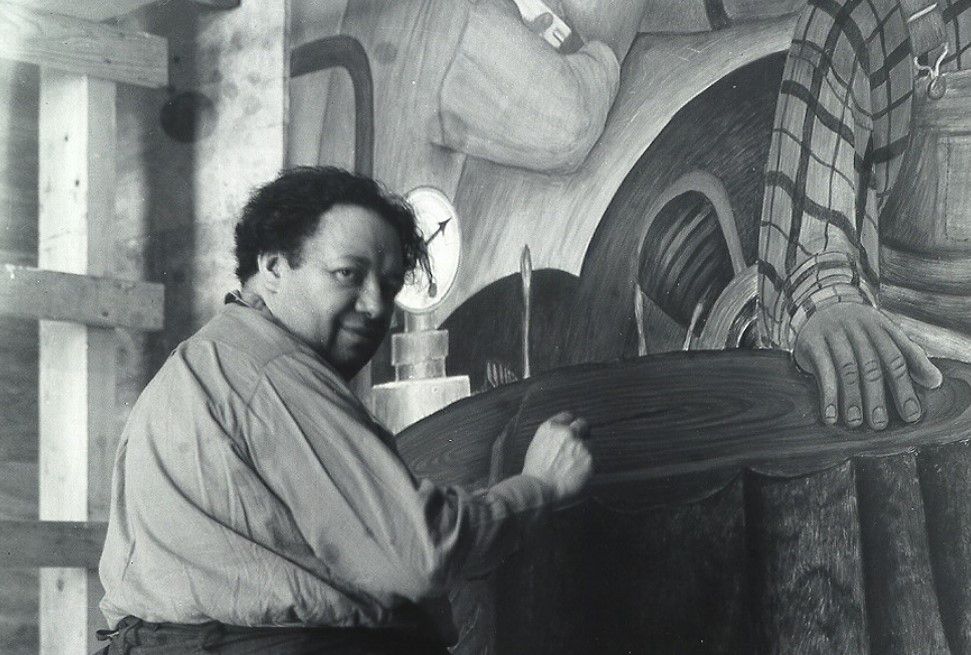 Riviera escaped by hiding on the floor of his station wagon while his aide sped him away. He feared that plainclothes policemen had arrived at his house to frame him for the assassination of Trotsky.

He left Mexico immediately to travel to San Francisco, and he remained there for the next 5 months. 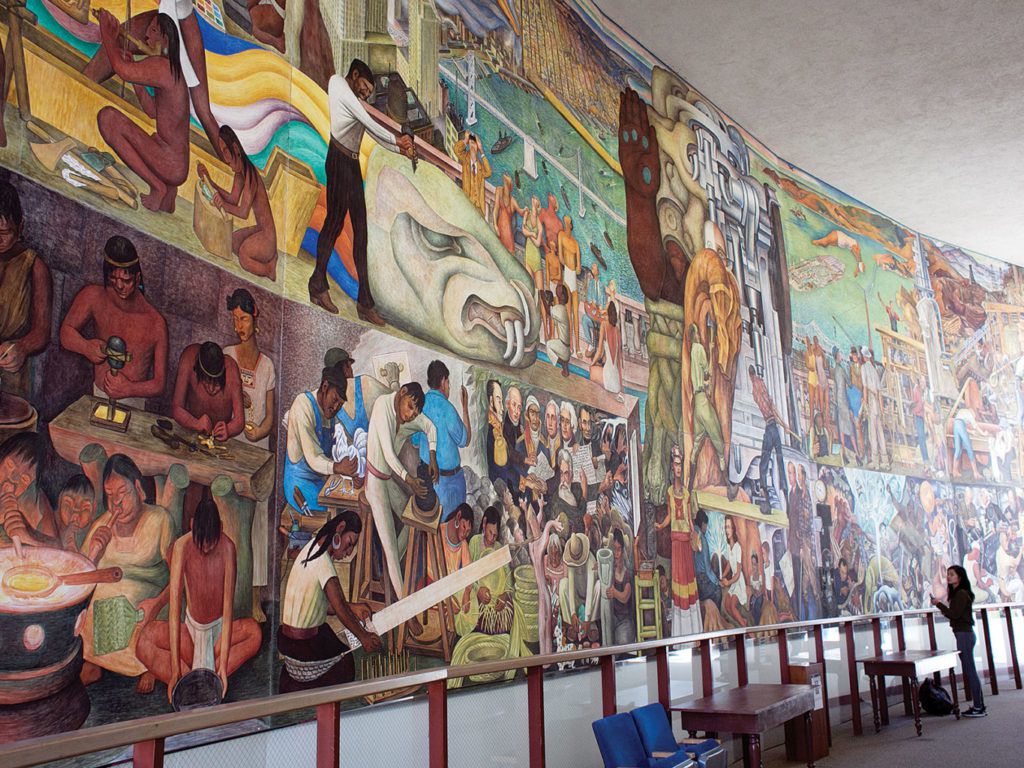 “I want to make clear to you that the difficulties that have been created for me within the last few days are the result of the work of Mexican agents of the Stalin-Nazis, who want to avoid my going to the States, to injure me here in every way, and assassinate me if possible,” he confided to a close friend.

While in San Francisco, Diego Riviera went on to paint one of the most important pieces of art in America, titled “Pan American Unity”. 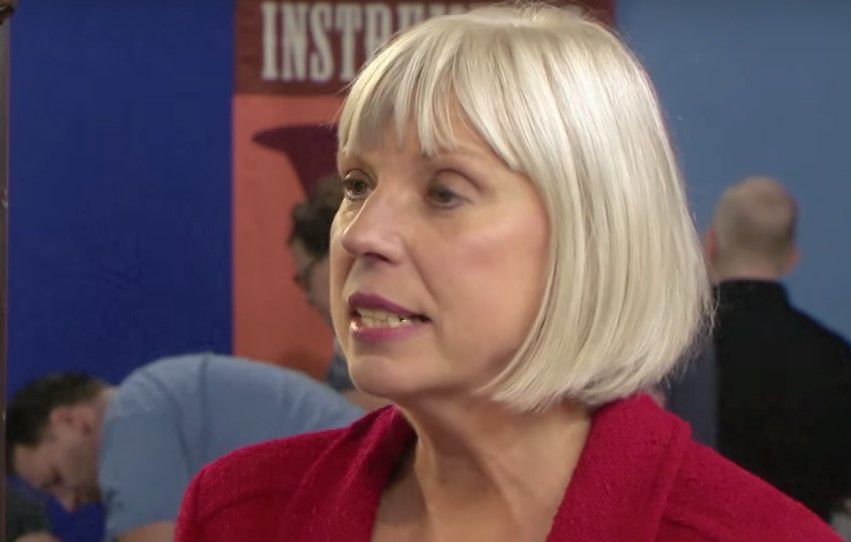 Back at Antiques Roadshow, Colleene continued to shatter Rue’s world, “The research that we found in the authentication process is that it had been missing. In the records of Mexico city it was unknown…where is the painting? Where is ‘El Albañil? Which is ‘The Laborer’.

It was an important painting for him in 1904, and then it disappeared.” Rue stares at Colleene in disbelief. 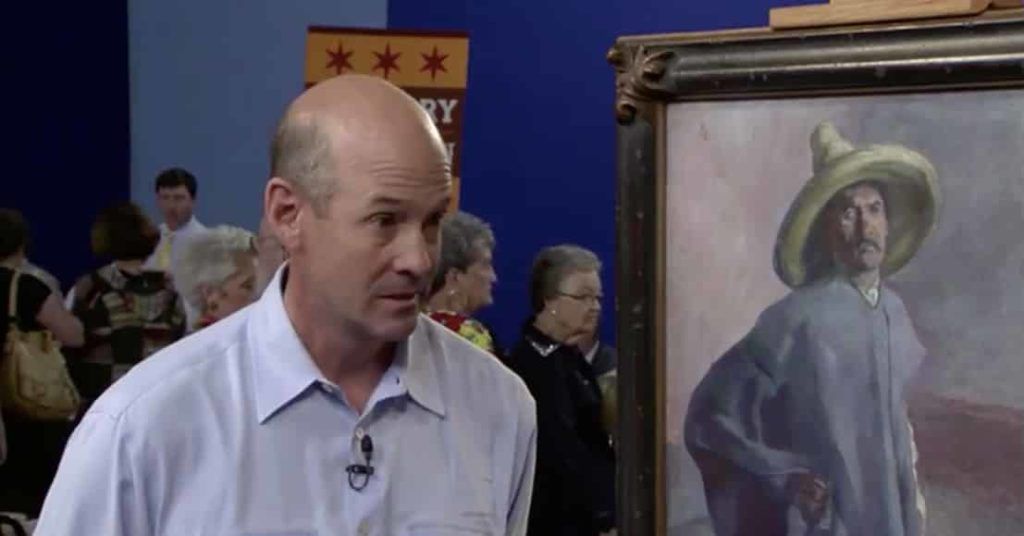 “Well, I think you have something of a painting trifecta here,” Colleene says. “The painting itself is by a very important artist, it has a terrific history–being purchased in Mexico in 1930–and it’s a very beautiful and important painting. So…trifectas usually pay pretty well,” Colleene says with a wry smile.

But what she said next almost brought Rue to his knees. 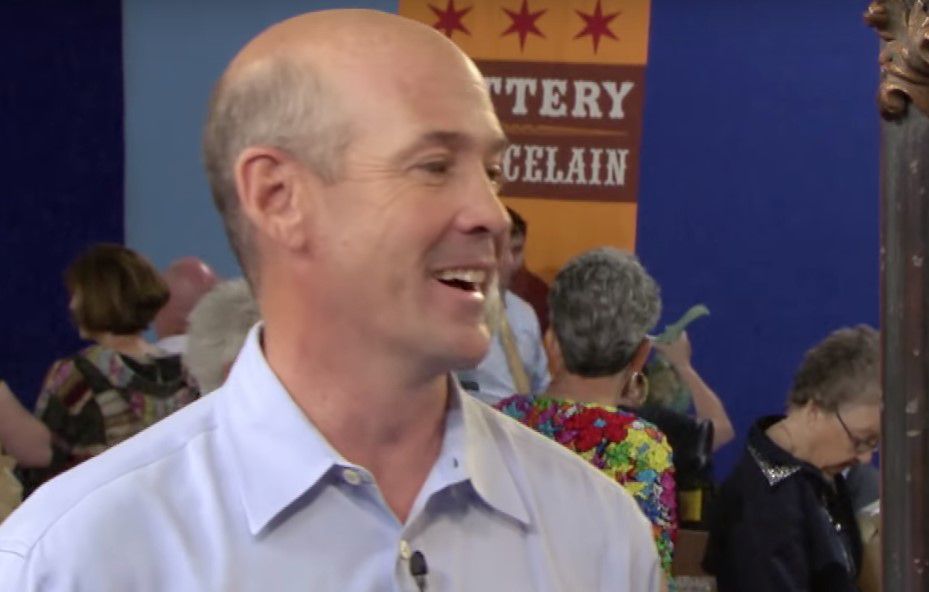 A million dollars for a painting that had been thought to be worthless…and worst of all, he had hung it in an office behind a door for all these years! 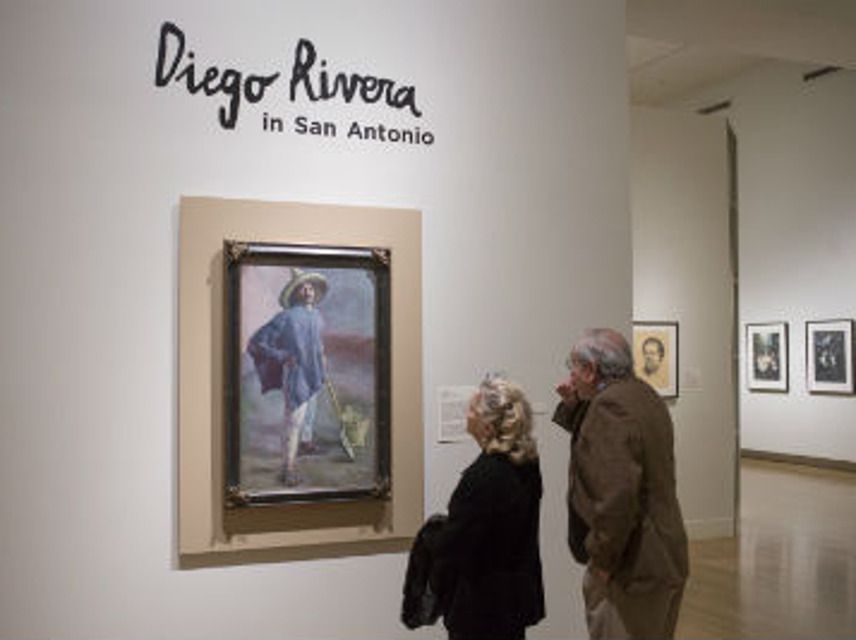 “My gosh…unbelievable…” Rue gushed, ” I did not expect that!” Since the evaluation on Antiques Roadshow, the estimate for the Diego Riviera painting has skyrocketed to an incredible $2,200,000! “It’s very rare to see works of Rivera’s that old. It’s not a painting that was sitting in a museum for people to see every day,” Antiques Roadshow executive Mariel MacNaughton said in an interview.

So, what does Rue plan to do with his rare and valuable artwork? 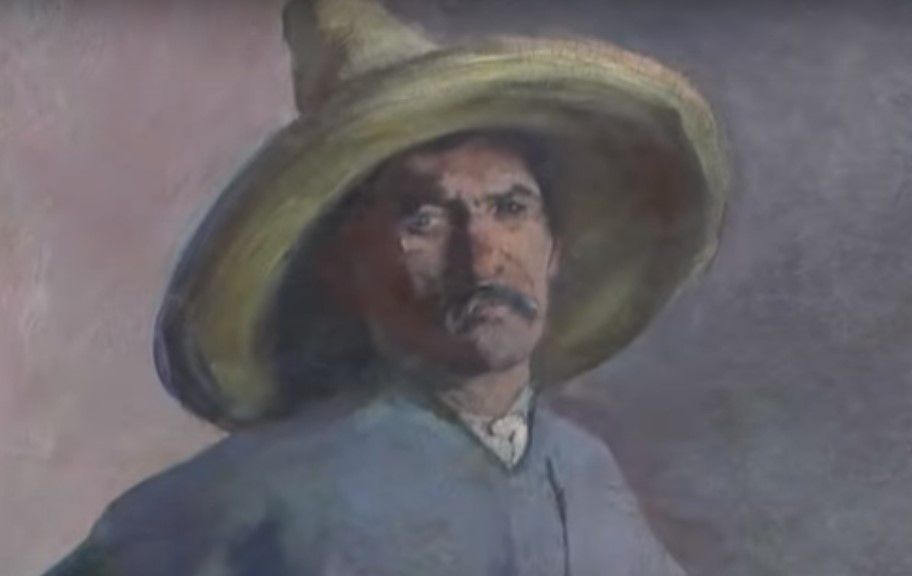 “More than likely I would imagine it needs to be in a museum where everybody can look at it,” Rue said. “Now I’m really scared to carry it around at this point.” So, that’s exactly what Rue decided to do. 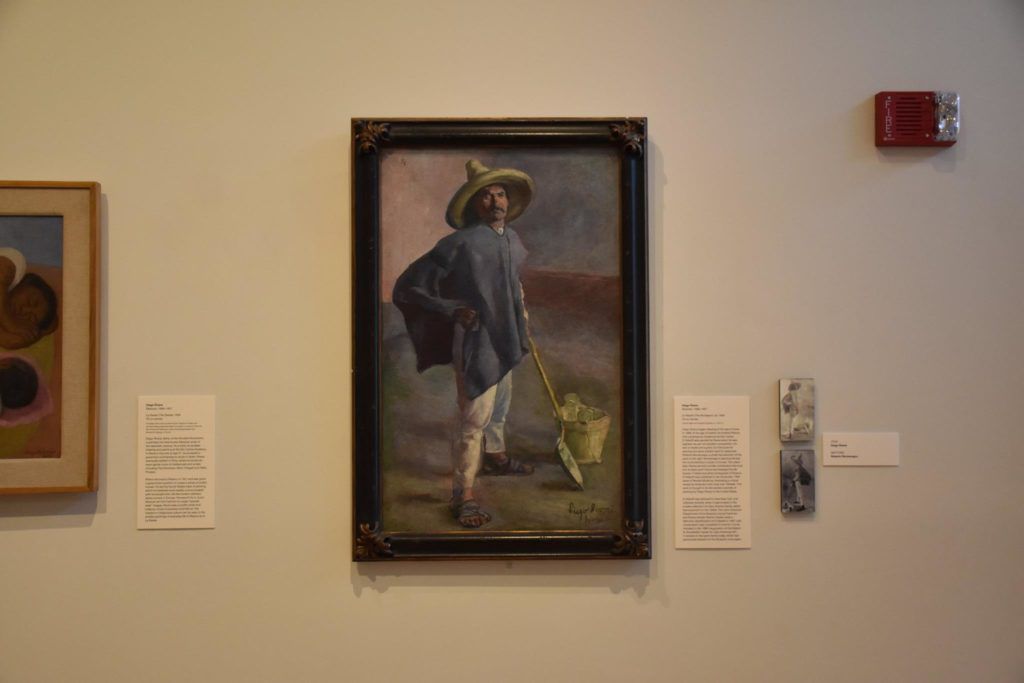 The important and rare Diego Riviera artwork is the earliest painting by the iconic Marxist artist currently in the United States.

But why the reevaluation at double its initial appraisal value? Colleene explains, “Market-wise, 17 different paintings by the artist have sold for more than $1 million at auction; most recently, ‘The Rivals’ from the Rockefeller collection sold for a record-breaking $9.7 million after a pre-sale estimate of $5 million to $7 million.”