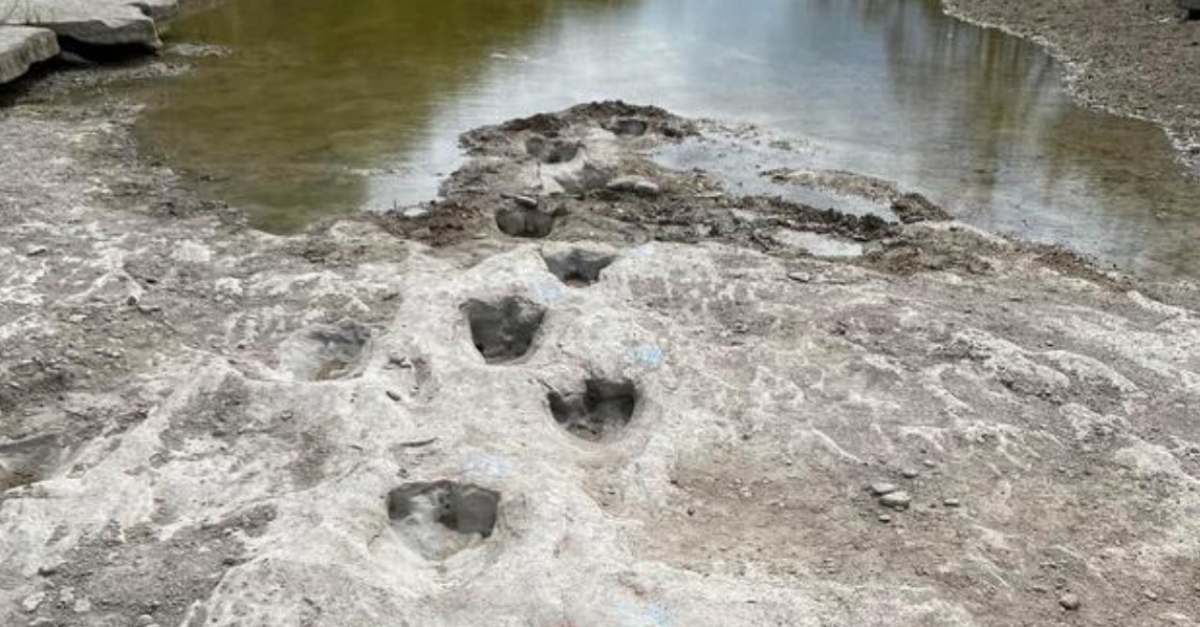 When he looked down, he stopped dead in his tracks. He was looking at something he had never seen in his life before. The bottom of the riverbed held the indentations of enormous footprints. What sort of animal had been there and left this behind?

He had just regulated himself when he heard a noise behind him. He whipped around only to find something he had never been prepared for.

It was one of the year’s hottest days, with temperatures reaching highs that had never been seen before. The sun engulfed the Texan neighborhood with overwhelming heat, and the air conditioner worked double time to keep Anthony cool.

To make matters worse, Dallas was amidst a drought that had long since been seen. The drought would have an impact that Anthony had never seen coming.

As much as he loved living is hometown, Dallas, and as grateful as he was for his air conditioning, Anthony Jones wished the heat would let up. Droughts tended to make life that much more difficult.

The water supply was always impacted; in extreme cases, the reservoirs would dry up, leaving nearby residents troubled and thirsty. But Anthony wasn’t concerned about that.

Anthony’s greatest love was hiking. He held several hiking trails south of Dallas close to his heart. But this made for another reason why he despised the heat.

It was a nightmare to hike in the scorching heat. Dehydration and fatigue came a lot faster, which he’d have to be careful about, and he’d have to wear an uncomfortable amount of revealing clothes.

His Father Taught Him

His father had been the one to instill the love for hiking within him. The two of them would go hiking on the Dallas trails when he was younger, his father teaching him all he knew about his active lifestyle.

His father was only 50 when he passed away from a heart attack. His passing taught Anthony that your life wasn’t guaranteed, no matter how healthy you tried to live.

It wasn’t easy for him to get over his father’s death, but he decided to continue hiking in his father’s name. It was his therapy in his tough times.

The drought had done something to his favorite hiking spot; if he’d known, he would have stayed far away, never to return.

His favorite trail was in a beautiful spot south of Dallas with a river running through it. Trails cut through and around the river while trees hugged close to it.

It was the ideal meditation spot for Anthony, where he could clear his mind. He had no clue what he would find a reminder of the terrain’s dark history as he got deeper into the trail.

It was a Saturday morning when Anthony packed his bag for the hike. He wanted to meditate on his favorite trail and had to pack extra water because of the heat. He also threw in a few energy bars for when he got hungry.

It wasn’t a long drive to the trail, but Anthony didn’t realize that the 15-minute drive led him closer to danger.

He parked and walked through the gates. It didn’t take long before he felt peaceful while walking through the fresh air and hearing the sounds of nature. He kept going, looking forward to reaching his favorite spot.

He was 20 minutes away from the river, but he would disbelieve when he saw what was there.

Anthony had arrived and couldn’t believe his eyes. The river had dried up, leaving little to no water. He could practically see the entirety of the riverbed.

He stepped where the water used to be and felt excited walking along its path. That was before he found something that chilled him to the core.

Anthony stopped dead in his tracks. He slowly looked down and noticed something that he had never seen in his life. They were footprints left at the bottom of the riverbed by something large. But what animal could have left them?

Just as Anthony’s initial shock calmed, he heard something behind that made him snap around. But nothing had ever prepared Anthony for what he was about to face.

Anthony snapped around and saw a man standing behind him. He was too well-dressed to be a hiker. It was clear he could see his confusion and introduced himself. He was a professor at the University of Texas and was just as interested in the footprints as Anthony.

Anthony was still confused as ever and asked the professor what had left the footprints. It was a burning question that stabbed at the back of his mind. But he wasn’t ready for the answer.

The professor told him that it was an Acrocanthosaurus. A dinosaur that inhabited the region over one hundred million years ago. Fascinated by this discovery, Anthony was keen to learn more about the large extinct lizard.

He asked for more information about the dinosaur and was willing to learn as much as he could. The professor smiled and taught him a few new things that he didn’t know before.

The large lizard was a predatory one and would hunt other dinosaurs and other animals to eat. But that didn’t explain the prints.

The professor also offered up an explanation for the prints being there, “Due to the excessive drought conditions this past summer, the river dried up completely in most locations, allowing for more tracks to be uncovered here in the park.”

“Under normal river conditions, these newer tracks are underwater and are commonly filled in with sediment, making them buried and not as visible,” he further explained. Anthony was satisfied with the explanation, and now his favorite spot had an even greater meaning for him.”