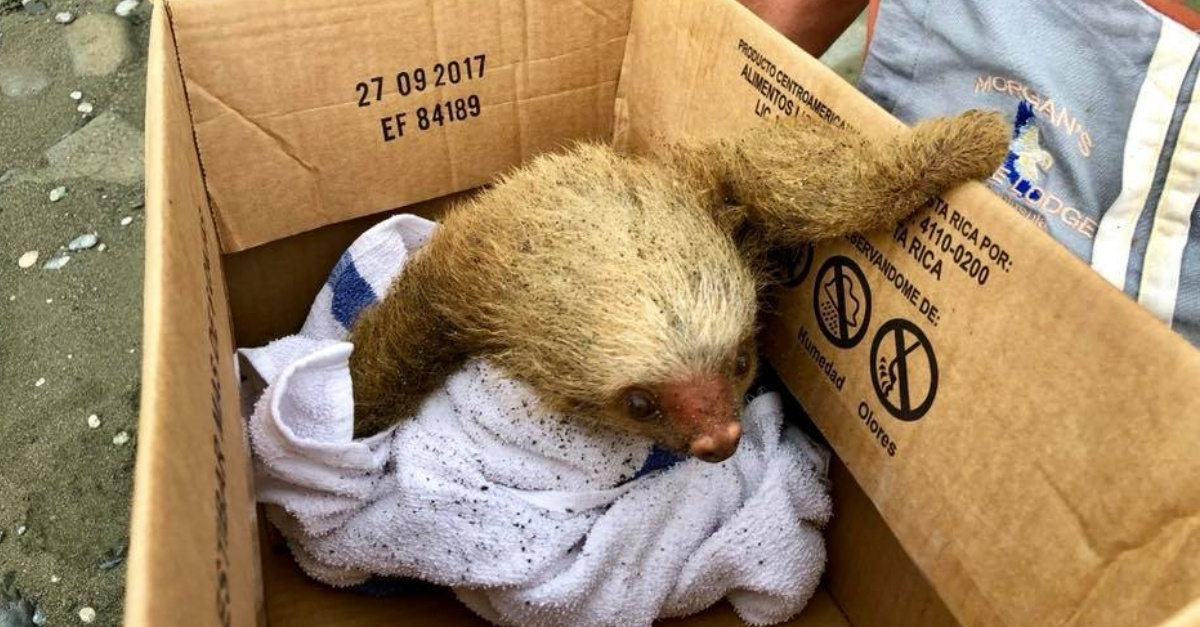 It was unlike anything he had ever seen before.

At first, he had no idea what it was, but every part of him said he had to do something. Even as he grabbed it and ran away, he wondered if people would call him crazy.

For Dirk and Lori Morgan, running a jungle lodge in Costa Rica was the best retirement they could hope for.

Their business was small, but that was perfect for the nature-loving couple. They wanted to be able to give the best possible service to anyone that stayed with them.

That week, they only had two guests.

The couple had already rented out a canoe and were talking with Lori about the best routes to take. Dirk fired up the barbeque and grinned at the magnificent shish kabobs he had created. High tide had come in and chased away the few people that had stayed on the public beach.

As the smoke wafted off the grill, he took in a deep, satisfied breath. His guests certainly wouldn’t go out hungry.

But as Dirk scanned the beach, and listened to the food sizzle and pop, he noticed an odd color on the rocky shore.

Out Of Place Color

A small splash of light brown stood out against the dark boulders.

It certainly wasn’t driftwood, and it didn’t have the bright colors of the normal trash that floated to shore. Suddenly, the mass moved on its own. It was alive!

His first reaction was to turn his attention back to the food.

However, there was something strange about how the scraggly creature moved in the water. It was unlike anything he had ever seen before. Dirk had to be sure. He called his wife over and pointed to the brown lump.

“Watch the lunch,” he said, walking out onto the rocky shore. He had to know what it was.

Dirk carefully stepped over the slippery stones, determined to find out what it was. As he got closer, he saw it had fur … and huge claws. There was no water creature he had ever seen before. It suddenly flailed its arms and made a sound Dirk would never have expected.

The strange sound pulled him closer.

It only took a few more steps to see what it really was. The crashing sound of a wave came from behind him. The water was going to swell in and wash the creature away. He had to do something! He sprinted for the animal.

Dirk pulled off his “Kiss the Cook” apron and scooped up the little animal before the salty wave pulled it away to a dark, cold end.

The animal made the same squeal it had made before. Dirk ran for home, calling for his wife to get a box and blanket. The first thing to do was get it clean.

“What on earth is that?!” Lori asked, eyeing the dirty, furry animal. The couple that was staying with them also came over, their eyes wide in confusion.

Dirk ran a gentle stream of fresh clean water from the hose, trying to wash the sand away. The animal reached up with its large claw and squeaked again. What was it?

It was a tiny sloth!

The adorably slow creatures could be seen in trees all over Costa Rica, and even near Dirk’s lodge. But this was one just a baby and had somehow fallen out of its tree and got washed along the shore.

It had been clinging to the rock for dear life.

The poor thing lay in Dirk’s apron, clean but utterly exhausted. It made another pathetic squeak – but this one wasn’t from fear. It was like he was begging for the humans to take mercy on him. Lori quickly pulled out her phone. There was only one place to call.

The couple that was visiting the lodge had never seen a sloth in real life.

The wife happily cradled the little thing in her arms like a tiny baby – a small tear even trickled down her cheek. By the time the animal rescue team showed up, the two guests were utterly in love.

So, with sad but understanding faces, they handed the little guy over.

Dirk brushed the sand from his apron with a huge grin. It wasn’t every day he could have a direct impact on the wildlife around him. But what would happen to the sloth?

Dirk was happy knowing it was going to a special clinic for wild animals.

The staff would take care of it until it was healthy again. Then, they would release it back into the wild where it belonged – stronger and ready to live out its life. It truly was a happy ending.