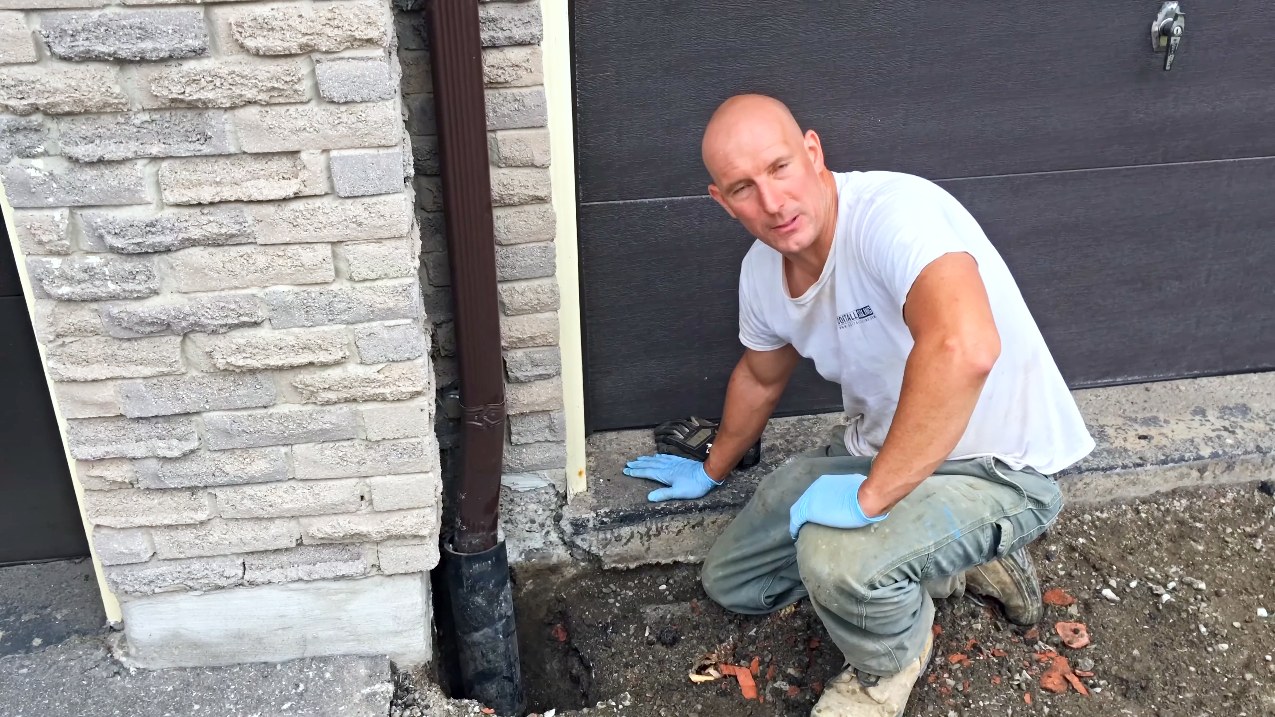 Inspecting the damage he had just done and thinking that his day couldn’t get any worse, he knelt down in the driveway and peered underneath his car.

But just as he was about to take a closer look at the concrete pavers, he heard the sickening sound that made his heart drop in his chest. What had he found?

When buying a new house, you never know what you’re getting yourself into. But 37-year-old Simon Marks just couldn’t resist when he found a house for a bargain price in Luton, England.

With the paperwork quickly signed and the transfer already underway, he never questioned why its owner was in such a hurry to get rid of it.

A few months later, Simon excitedly unpacked his boxes. He was eager to spend the first night in his new home. After a tiring weekend of hauling his belongings back and forth, he climbed into bed exhausted. Calculating the distance of his new (and much shorter) commute to the office, he gleefully set his alarm for 8 a.m.

But while he lay in the darkness, he heard a strange sound.

Trying not to breathe, he listened intently. And then, he heard it again. It was coming from outside. It was a dull and muted sound — like gravel scraping on metal. Curious, he got up and poked his head out the window, scanning the garden below. But nothing moved. All was silent again.

Shrugging his shoulders and climbing back into bed, he had no idea that something was shifting under his new home.

The next morning, Simon threw his black Vauxhall Zafira into reverse. But instead of backing out of his driveway, the car lurched forward. Cursing, he tried again, but the wheel seemed to be caught on something.

Revving the engine until the car jumped backward, he let out a sigh of relief. But when he got out to see what had been stuck under the front wheel, his stomach dropped.

Kneeling down to take a closer look, Simon saw that the pavers of the driveway had cracked. And then, right before his eyes, the driveway began to give in. He jumped back as the pavers broke with a sickening snap, then the concrete crumbled and fell into the earth.

But as the dust began to settle, the crack in the ground revealed something truly unnerving.

Something That Shouldn’t Be There

Now, Simon knew that his house had been built in the 1970s by the elderly couple who had lived there previously, but this definitely hadn’t been on the house plans.

When he was sure that it was safe to put his weight on the surrounding pavers, he lay down on his stomach and inched forward. Seeing a glint of something in the earth, he fetched a trowel and began to dig.

The dirt gave way easily and soon he could see a piece of metal sticking out from the soil. He uncovered it with his hands until he was able to get a grip on it, and then he pulled with all his might. But the rusted piece of metal wouldn’t budge no matter how hard Simon pulled.

He decided to try to dig around the mysterious object to free it from the earth. As he began to uncover more and more of the piece of metal, he saw that it was attached to something.

When Simon had first seen the black hole opening up, his mind began to race with visions of his car, and even worse — his entire house — being swallowed by a giant sinkhole.

But when he looked closer and saw the glint of a man-made object underneath, he knew he was dealing with something far more sinister. He pulled out his phone and called for backup.

Simon’s father, Gerald, raced to the scene. And, without any professional tools or equipment, the pair got to work. They carefully began to remove the cracked concrete around the piece of metal, revealing a rectangular hole in the ground.

There, descending into the darkness, was a rusty ladder. Now, they were beginning to feel uneasy. Why had this secret passageway been hidden underneath the driveway? Where did it lead? There was only one way to find out.

Simon had done his research before buying the old house. He was all too aware that ordinance surveys wouldn’t shed any light on the mysterious passageway hidden beneath his driveway.

According to the reports, there had been nothing but empty land there before the home was built. A shiver ran down his spine as they began to dig.

They dug out shovelful after shovelful of the densely-packed mud and carted it away in buckets. The pile of earth beside them grew larger by the hour, and soon the pair had painstakingly excavated around five feet of dirt — enough for them to climb down the ladder and investigate.

And what they found would shed some light on the house’s eerie past.

As Simon climbed halfway down the ladder, a strange feeling crept over him. He didn’t want to go any further. What if it wasn’t safe? He ran back to the house to fetch his selfie stick. With his phone firmly attached, he lowered it into the hole.

On the phone’s screen, he saw that the underground passageway was hiding two rooms. Gerald thought he knew what they were looking at immediately, but they had to be sure.

Simon had purchased the property in question for around half a million dollars. But the land had been used for something else, long before the house was built there.

The elderly man who had sold the house to Simon was the original owner of the home, but he’d neglected to tell Simon what lay underneath. The sounds he had heard the night before had been the earth finally giving way under the driveway as it fell into the secret room.

Simon and his father stopped digging and began to do some research of their own. They looked up the plot number and then things became apparent very quickly. Prior to the previous owners of the house, this plot of land had stood empty.

But Gerald quickly pointed out that the land was situated in a strategic place in the town. But even more telling was the period in which the house had been built.

“My dad saw it and instantly said it’s an air raid shelter,” Simon said. “We googled it and found there are quite a few in this area.” After conducting some research, Simon found out that the shelter had been built during World War II!

“The previous owner must have known it was there and when he built the house and put a garden in… he must have filled it in,” Simon told the reporters.

In 1938, during WWII, A man by the name of Sir John Anderson was tasked with preparing the county for war. It was his duty to come up with a strategy to protect Britain’s citizens from the impending onslaught and the bombings that he knew was coming.

So, he devised an ingenious plan to ensure the civilians’ safety.

Sir John Anderson and his team of engineers planned and helped to create cheap and simple underground shelters that could easily be buried in people’s backyards. The close proximity meant that British citizens could seek shelter at a moment’s notice.

These structures’ walls were constructed from lightweight and flexible metal — a better alternative to concrete. Over two million of these bomb shelters were scattered around the country. But what Simon had found was not one of these…

Just by looking at the chamber that Simon had found, Gerald could immediately tell that it wasn’t an Anderson-designed bomb shelter. But it had indeed been built around 1938 — not long after a bomb landed in the area near Luton.

Citizens in the area were frightened when they learned that their small city was now a target. They had to find a better way to stay safe.

The community came together and quickly devised a plan to create a community shelter that was built to better withstand the air raids. Gerald could tell that the shelter that they had uncovered was definitely not an Anderson-style shelter — it had at least two rooms and was constructed from bricks and concrete.

And, as Simon and Gerald dug deeper into the shelter, they uncovered some unusual artifacts.

In one of the hidden rooms, Simon and Gerald found a newspaper clipping. The Herald newspaper dated from the days of WWII and one of the headlines read “Luton Airport is this the end?” while other articles detailed the goings-on of daily life in the war-torn country.

This artifact offered a rare glimpse into British life during the war, but it wasn’t the only relic they found.

Simon and Gerald also found evidence that proved that the bomb shelter had once been stocked up with food and water to sustain the people who hid there. After all, people who were held up in underground shelters could be stuck there for days at a time.

“It’s incredible to think it has all been made by hand,” Simon later told reporters.

The concrete walls of the underground shelter had been reinforced by brick and mortar, which created a further buffer to protect it from the raids from above. But even after Simon and Gerald had finally unearthed the monumental discovery, their work still wasn’t done.

“It’s been a case of dig, dig, dig. We’re about five feet down at the moment so it’s just another five feet to go until it’s finished. I think we’re going to have to get a skip in because there’s so much rubbish to get rid of,” Simon stated. Then, the pair made another discovery…

“One of the walls has been bricked up. I’m 90 percent sure we won’t find out any more rooms but we don’t know. They might have bricked up one of the walls when the house was built to make way for the foundations,” Simon told reporters.

“If that’s the case we’ll just have to leave it,” he added. But it wasn’t long before the discovery went viral.

As Simon and his father continued to dig, news reporters and neighbors began to flood into his front driveway just to get a look at the amazing and historic discovery.

But Simon didn’t care much for all the attention he was receiving — his concerns lay elsewhere. He didn’t spend hours digging up his driveway for fame.

A Piece Of History

Simon felt that it was important to let the world know about his discovery, but not for notoriety. He feels that he has an obligation to his country’s rich history. He didn’t want this piece of history to be forgotten.

He wanted the air-raid shelter to be preserved for future generations. So, what does he plan to do when the shelter has been completely cleared?

Simon and his father plan to restore the shelter and preserve it — they hope that it will be declared an important and historical monument. They believe that just because the war is over and long past, that period in time should never be buried and forgotten.

They hope that future generations will visit the shelter and catch a glimpse of an important part of history.