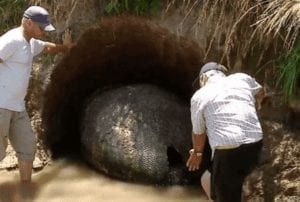 Jose Antonio Nievas is a farmer who decided to go out and enjoy his Christmas Day by taking a walk with his dogs. Other than being Christmas, the day didn’t seem any different from any other but this day in 2015 was going to be very special indeed.

Nievas’ farm is roughly 25 miles south of Buenos Aires. During his stroll, Nievas passed a stream that was on his property when something caught his eye. He knew the stream but this time he saw a huge rock that he’d never noticed before.

Not What it Seemed

When Nievas approached the rock he realized that it was not, in fact, a rock. The object was caked with mud so he couldn’t figure out exactly what it was. He walked over to the object and began to clean the mud off with his hands until he suddenly had a real shock.

Who You Gonna Call?

Nievas tried to dig the object out of the ground for some time in an attempt to get a clear look at whatever it was. IT quickly became clear that he would need some help moving the object from its location so he called someone to help him.

He quickly called his wife to tell her that he had found something remarkable and asked her to come and help him. She didn’t believe him when he told her what he thought he had found and thought he was joking.

“My husband went out to the car and when he came back he said, ‘Hey, I just found an egg that looks like it came from a dinosaur,” his wife said. “We all laughed because we thought it was a joke.” However, it was no joke.

His wife finally came to help him and soon realized that it was not in fact a dinosaur egg at all. The object was huge, however, and this made it even more puzzling. Nievas and his wife stared in confusion at what they had found but soon they would learn what it truly was.

Bigger Than Them Both

The pair continued to work and try to excavate their discovery. They worked tirelessly and were careful not to damage or harm the object. Even so, the couple realized that the object was bigger than it seemed at first. They needed help.

Hundreds of people had gathered on the farm to see what the strange object might be by the time the police arrived on the scene. Even so, none of the onlookers, nor the police, could really identify what this thing was.

The police were just as confused as Nievas and his family. No one could provide a suitable answer. Fortunately, Nievas’ dog arrived at the site and started to behave strangely. This would ultimately provide a hint as to what it was that they had found.

Jose’s dog had made its way over to all of the commotion and started exploring the area of the riverbed where the big, bizarre object was found. The curious dog started sniffing and barking at it leading the human observers to realize that this was more than just an ordinary stone.

The locals began offering their guesses about the strange mystery. Still, none of those who had flocked to Jose’s farm to witness the extraordinary discovery could offer an explanation that seemed to fit. That’s when the police decided that it was vital to take further action.

Turning To The Experts

At this point, the authorities decided to bring in specialized experts, and called upon two local archaeologists who could hopefully explain the out-of-this-world discovery. The archaeologists were delighted to have the opportunity to be part of the rare discovery.

What Could They Uncover?

As the archaeologists attempted to remove the mud and dig the giant egg-shaped item out of the riverbed, they realized just how huge and heavy it was. The group of excavators struggled to move the shell. The experts had to wade in the muddy water to dig around the gigantic and heavy artifact. They were finally able to extract it and carefully load it for transport to the lab, where additional research would provide an extraordinary answer.