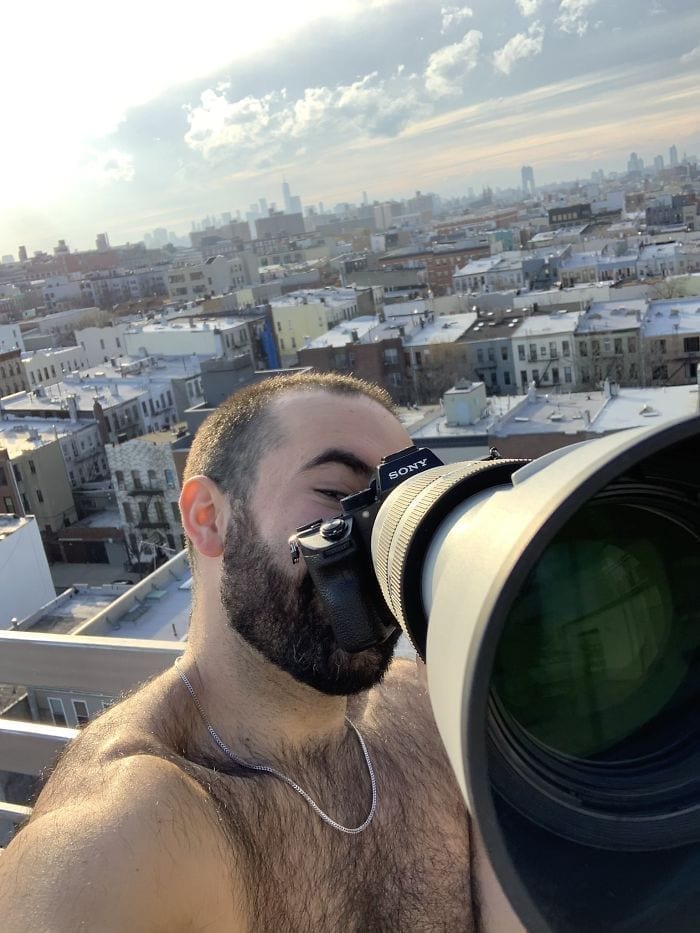 Many things have obviously come to a standstill during this time of social distancing, not least of which, people’s dating lives. Programs like Zoom and Facetime have replaced face-to-face encounters as ways to connect and keep in touch.

However, one New York photographer decided that even now he would take a shot at making a real connection.

Jeremy Cohen is a photographer who is based in his Brooklyn, New York home. While stuck at home, Jeremy noticed something on the roof of a neighboring building. What he saw struck a chord and he decided to take a chance.

He waited for the perfect opportunity before sending the modern equivalent of a message in a bottle.

While staring out of his window, Jeremy happened to notice a figure on the roof of a nearby building. There, seemingly without a care in the world, Jeremy saw a woman dancing. She was clearly having a good time and Jeremy wanted to get to know her.

That’s when he thought of an ingenious plan.

Jeremy waited to see her again and quickly scribbled his phone number onto a piece of paper and stuck it onto his drone. He then expertly maneuvered his drone into the air and flew it over to the rooftop in question.

How would she react though? Jeremy just had to wait and hope.

Jeremy chose this method to not violate the self-isolation/social distancing regulations in place in New York at the moment. Currently, there are 440,000 COVID-19 cases in the world, 15,000 of which are in New York alone.

That’s why New York is currently under stay-at-home-guidance.

The long-shot that Jeremy took in sending his number via drone paid off. The girl was Tori Cignarella and she had simply been blowing off some steam on the rooftop of her Bushwick apartment, unaware of her audience. The two chatted and soon arranged a “date”.

Together they shared dinner via TikTok.

“There were people in the direction I was facing and I just started dancing,” Tori said. “I like making people laugh if I can, and I like making myself laugh, too.” When Jeremy saw her dancing he thought she was creating her own TikTok video.

However, that was not the case at all.

“I was doing the High School Musical ‘We’re All In This Together’ dance,” she said. “A poor rendition of it, but that’s what it was supposed to be!” Tori remembers. Tori manages a co-working space in the city and was staying at home with her roommate.

Both had noticed the people spread out over their neighborhood’s rooftops, taking advantage of the unseasonably warm day — while maintaining safe social distance. (Cohen is even working on a photo project of the scene.)

At some point, while Cignarella was dancing, Cohen waved at her. She responded in kind. “I really like meeting new people, so if someone’s going to wave to me, I’ll gladly wave back, I’m not going to ignore it,” she said.

That interaction was enough for Cohen to decide he needed to find a way to communicate. “I felt like this weird connection with her, to be honest,” he told TIME. He remembered an idea he and a friend had dreamed up about sending a number via drone.

“I thought, this is a perfect opportunity to do this,” he said.

For her part, Cignarella was certainly surprised by the unexpected turn of events. “It was a ‘holy cr-p’ kind of moment — like, Oh my god, this is happening right now?” she said of being the recipient of the drone. “It was really cool.”

Although the drone first flew a little too far overhead, Cignarella eventually was able to take down Cohen’s number, which he had taped to the device. Cignarella’s phone died in the middle of the proceedings, so it took her an hour or so to respond.

Setting Up A Date

But after texting and making sure he flew the drone safely back, they ultimately set up a virtual date, sitting down at separate tables on their adjacent rooftops with a video call set up to get to know each other despite the limitations of a city in the thrall of coronavirus.

So how did it go? “It went well,” Cignarella said. “I won’t spill too many details. It went well is all I can say.” For Cohen, who describes himself as an “optimistic” person (and, in his TikTok bio, a “hopeless romantic”), the constraint of a city staying home is just a chance to get creative — and give new things a go.