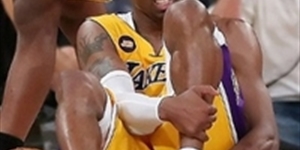 Whatever your feelings about Kobe Bryant, whether you love him or hate him, there’s no denying that the guy can straight up score the basketball. This season, at age 34, Bryant put the Lakers on his back in hopes of dragging them into the playoffs, and in the end, he just broke down. Bryant collapsed on the floor on Friday night, clutching his leg and knowing his season was over. The Lakers star tore his ACL, an injury that’s hard for even the youngest player to come back from, and critics are already wondering if he’ll ever be the same. Kobe vows he’ll bounce back, but if and when he does, will the 17-year veteran ever again be the dominant scorer we’ve come to know him as?

Sure it was against a battered, old Michael Jordan during his forgettable season with the lowly Wizards, but Kobe Bryant can still say he dropped 55 points against the greatest scorer in league history. On March 28, 2003, Bryant dropped 42 points and hit 8 threes in the first half alone, and likely would have embarrassed the Wizards even further, had he not run into foul trouble in the second half.

Not to be outdone by the man he was constantly compared to, Kobe Bryant made his mark on Madison Square Garden on February 2, 2009. Kobe’s 61 points not only bested the previous opponent scoring record at MSG, previously held by Michael Jordan, but also broke Knicks great Bernard King’s all-time single game record in Garden history. Bryant tallied his 61 on a stellar 19-31 shooting night, where he was also a perfect 20-20 from the free throw line.

It wasn’t his highest scoring total, but December 20, 2005 may have been the greatest performance of Kobe Bryant’s career. A single game with 62 points is insane no matter how you look at it, but it’s a whole lot crazier when you realize the guy sat out an entire quarter of the game! At the end of three quarters of play, Kobe Bryant had scored 62 points, while the Dallas Mavericks had just 61. Yeah, he literally beat an entire team by himself. That’s just cruel.

In the midst of a 7-game losing streak, Kobe Bryant had had enough. On March 16, 2007, Bryant put together the second highest scoring total for his career, notching 65 points in a Lakers 116-111 overtime win over the Trail Blazers. Bryant finished the game 23-39 from the field, knocking down 8 three-pointers, and lighting up the Blazers for 24 points in the fourth quarter alone. When all was said and done, the losing streak was over, and Bryant had scored the fourth most points in Lakers franchise history.

On January 22, 2006, Kobe Bryant absolutely went off. In a 122-104 Lakers win, Bryant torched the Raptors for an unbelievable 81 points and landed himself in second place on the all-time single game scoring list behind only Wilt Chamberlain’s legendary 100-point performance. After the Raptors built a 13-points lead, Kobe decided to literally take them on himself, having the equivalent of two good games in two quarters, scoring 27 and 28 in the third and fourth quarters, and leading the Lakers to a stunning win.
Must Read
Google Earth Images That Are Works Of Art
Deputy Didn’t Realize A Camera Was Filming Him
Repairs On Golden Gate Bridge Lead To Discovery