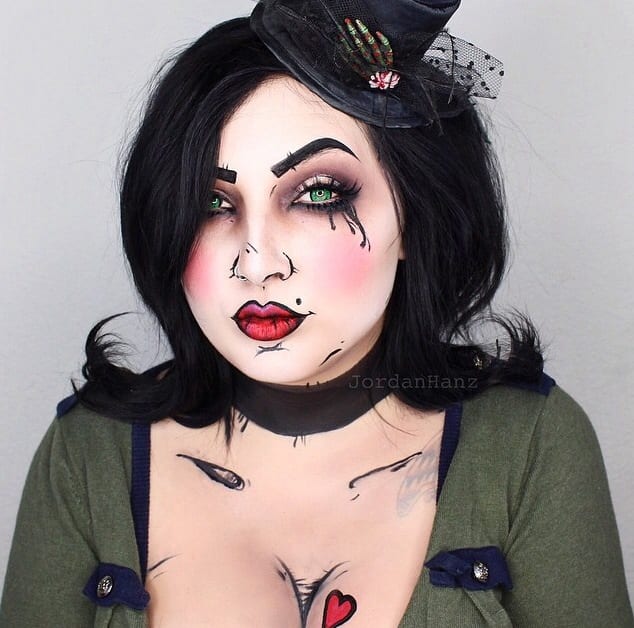 Good makeup transformations can be mind-blowing. From going from drab to glam in no time or going from no sleep to a full 8 hours in a matter of minutes, or even mastering the “no-makeup-makeup” look, makeup transformation videos are truly exhilarating to watch. Whether you’re into simply enhancing your features or into super glam contouring looks, YouTube and Instagram are home to plenty of exciting videos that cater to whatever style of makeup you’re looking for.

There’s no shame in throwing on a fun Snapchat filter and taking a selfie. It’s good fun and we’ve all done it. YouTube makeup artist NikkieTutorials takes that fun to the next level by posting fun makeup tutorialsrecreating some of our favorite snapchat filters to give you all of the makeup inspiration.

NikkieTutorials is a versatile MUA; she has videos ranging from the classic full-face glam looks to reviewing some of the most popular beauty brands and cool makeup transformations that you wouldn’t even think of. Think cartoon eyeliner videos and tons of music-video-inspired looks. She has an impressive army of over 9 million followers and rubs shoulders with plenty of other YouTube MUAs.

Celebrity transformations are a popular makeup trend and every makeup artist has their own unique style of creating a look that can wow the internet. When French makeup artist Magali Beauvue’s video of her celebrity makeup transformations went viral, people were wowed by her abilities to literally transform herself into anyone — male or female. For Beauvue, no one poses a challenge.

The French-based beauty guru has an Instagram page of over 147,000 followers where she continuously wows them with her makeup transformations into some of our favorite celebrities. Think Drake, Amber Rose, Cardi B and even famous historical figures like Martin Luther King, Jr. In the makeup community it’s pretty commonplace to transform yourself into your favorite star, but Beauvue’s work is recognizable for its interesting style. When looking through her collection of transformations, it seems as if you’re looking at an oil painting coming to life. You can follow Beauvue’s art on her Instagram, MakeupMag.

The Filipino actor and TV host is known as the King of Makeup transformation for a reason — he uses his makeup skills to turn himself into just about anyone. Paolo Ballesteros is no stranger to the spotlight: he is a long time host of Filipino show Eat Bulaga and has made international headlines when photos of his amazing makeup transformations started to go viral.

One of the most shocking transformations is when Ballesteros impressed Game of Thones fans everywhere. Ballesteros blended and contoured his face into Sansa Stark, Cersei Lannister and the beloved Daenerys Targaeryan, to name a few. Other famous celebrities that Ballesteros creates include Angelina Jolie, Miley Cyrus, Kim Kardashian and Tyra Banks. Ballesteros is so well-known for his celebrity transformations that he has taken it to the red carpet at the Tokyo International Film Festival, where he impersonated both Angelina Jolie and Julia Roberts.

We’ve all been there. Halloween is creeping up and you slowly freak out because you realize that you don’t have a costume. So you head to the internet in hope of being inspired by something, anything. Instead you’re met with cliché costume after cliché costume. Well, next year before you bore yourself with some of the generic Halloween costume ideas on Pinterest, head to Jordan Hanz’s YouTube channel for all of the inspiration you need.

Hanz is a portrait painter who began to transfer her skills to her skin and create dynamic makeup transformation looks from several characters from movies, TV and video games. Hanz doesn’t shy away from the realistic details that will get her the look she’s going for. And the best part is that she has tutorial videos where she explains every detail step by step, so you can create the look yourself.

Some of her creative works are Pop Art Wonder Woman, Rick and Morty, and her own visual interpretations of the elements through body art. Hanz’s transformations will leave you speechless and wanting more.

It’s one thing to transform yourself into a celebrity and actually make it look realistic. It’s another thing to use your face as a canvas to create looks inspired by abstract things, like the elements, and make it look instantly recognizable. It’s also quite impressive to blend your face into adorable characters from your favorite movies and cartoons. Promise Phan can effortlessly do all of that.

Promise Phan is one of the OGs of makeup transformations and an OG in  YouTube makeup in general. For over 7 years, Phan has been creating some of the most realistic-looking makeup you can find on the internet and her videos just keep getting better. Phan has done just about every classic celebrity you can think of, like Mariah Carey, Beyoncé and Lana Del Rey and she’s miraculously looked exactly like each and every one of them.

That’s not all: Phan also has an impressive lineup of cartoon characters like Sailor Moon and the PowerPuff Girls and fun creative looks like the Pixel Face. Promise Phan has a vast library of seamlessly transforming her face into anything you can think of and will leave you speechless with just how talented she is.

Are you in love with makeup? Check out these Top 5 High End Beauty Brands Worth The Price Tag!