What Makes This Exfoliator The Most Exciting Skincare Around? – Clone

AAVRANI’s Glow Activating Exfoliator is pioneering the future of exfoliation by looking deep into the past. Inspired by rituals passed down to AAVRANI founder Rooshy Roy by her grandmother, it is changing the game for all women who seek a more nurturing way to revitalize their skin. So what’s its secret?

Glow Activating Exfoliator is the first of its kind: the world’s first non-staining turmeric mask. First used in India, turmeric has been fabled for its restorative powers for thousands of years. This golden root plays a fundamental role in Ayurvedic medicine thanks to its one-two-three punch (anti-inflammatory, antioxidant, antiviral). The only downside was its yellow stains. Well, no more: AAVRANI has pioneered a modern formulation that harnesses turmeric’s ancient prowess while leaving nothing behind but glowing, healthy skin.

Inflammation happens. Sometimes it’s the properties of everything else that touches your face, like dust and pollen. Sometimes, thanks to that gut-skin connection, it’s the stress of daily life. And sometimes it’s the products you use. Glow Activating Skin Exfoliator fights inflammation. Its combination of turmeric, neem, and raw Manuka honey tame redness and bumps, always leaving you fresher than before.

3. It understands if you’re the sensitive type

Some exfoliants can be tough on sensitive skin. Not this one. Glow’s turmeric is extremely gentle on your face. Its Manuka honey, produced by bees that are particularly drawn to a tea tree native to Australia and New Zealand, is an excellent source of hydration, essentially serving as an instant application of moisturizer.

4. It treats acne with total disrespect

That’s in part because Manuka honey’s antibacterial properties are exceptional. No offense to the honey that comes in a plastic bear, but Manuka honey puts it to shame, with, as researchers would say, a far higher phenolic and methylglyoxal content. Or, in more familiar terms: it tells bacteria build-up and breakouts to buzz off.

5. It resurfaces, brightens, and clears blemishes like that’s its job

Probably because that is its job. Glow’s neem, or Indian lilac, is legendary for anti-aging properties stemming from its high antioxidant count, as well as additional abilities from treating uneven skin tone to lightening scar tissue. Turmeric also fights all manner of skin ailments, while Manuka honey is so powerful the FDA has approved it for wound treatment.

6. It connects you to something special

These ingredients have formed the backbone of self-care rituals for centuries. By bridging the gap between ancient and modern, AAVRANI connects you to countless generations of women, and millions of moments of bliss where inner harmony and outer beauty became one. Just something to meditate on during your five sweet minutes of mask time.

7. It’s as gentle on your wallet as it is on your face

Glow Activating Exfoliator starts at $29. There aren’t many opportunities in this world to take care of your face’s health and your financial well-being simultaneously. This is absolutely one of them. Start your journey today, and let every day after feel like the first of its kind. 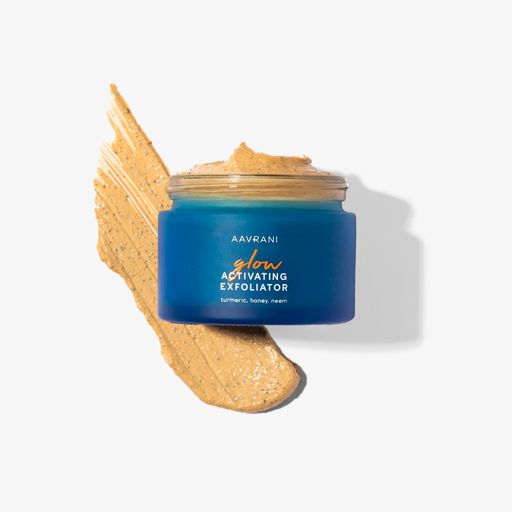 Spend $100 on our best-selling skincare and get a $50 gift card FREE. Plus, enjoy free samples with every order

Spread evenly on clean, damp skin. Leave on for up to 5 minutes or until the mask hardens. Remove gently with a wet, warm washcloth and pat dry.