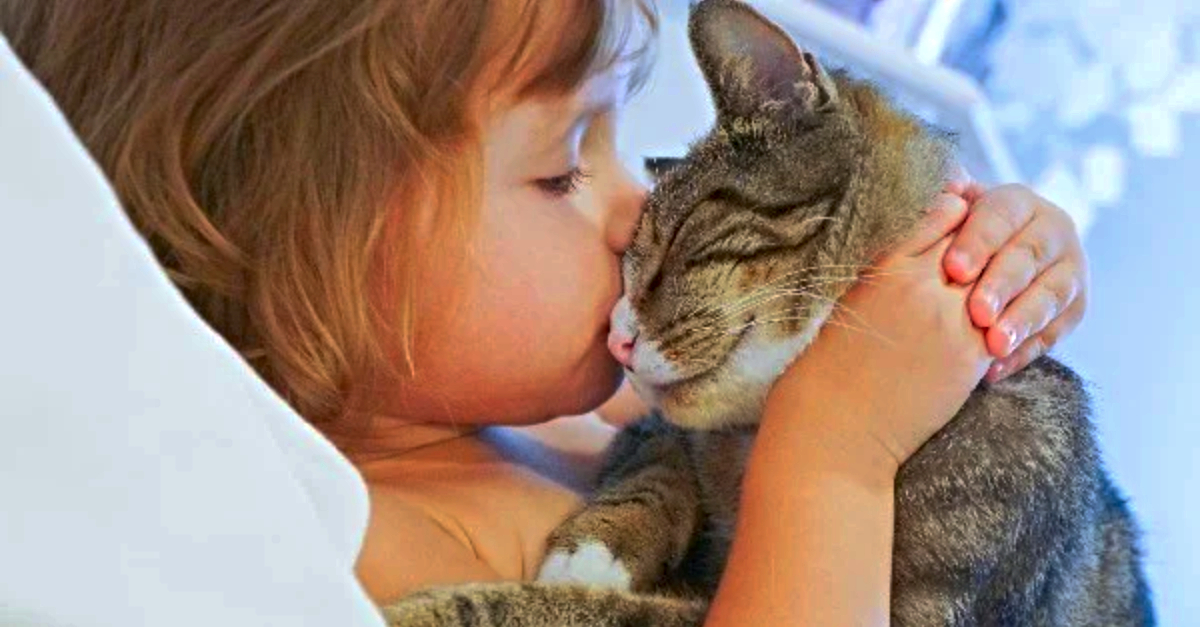 They Had Almost Given Up

They had almost given up all hope. Their little angel was diagnosed with ASD. This meant she struggled to make contact with other people. But that wasn’t all, she had barely spoken her whole life.

What didn’t help was the news the doctors had given them. They said she might never speak a word. But when the cat came along, everything changed.

Iris Grace Halmshaw lived in Leicestershire, England with her parents. She was diagnosed with Autistic Spectrum Disorder early on. This meant that she faced many struggles by the time she was five.

Her condition meant that she struggled with maintaining and finding new relationships. She couldn’t properly communicate with people and only her parents understood her.

To make matters worse, it seemed that the little girl struggled more than others her age with her condition. Some strange side effects were her fear of water.

Iris seemed like the most extreme case of ASD most doctors had ever seen. For years she couldn’t even speak, but why couldn’t she?

She Could Understand Language

The weirdest thing was that Iris seemed to be able to speak. She didn’t have any physical disabilities that would impair her ability to speak. She also understood language perfectly.

The way they explained it was that Iris wasn’t able to speak because she never felt comfortable enough to communicate what she was thinking. Their outlook was grim, but then things would change.

Iris’ parents would do anything for their little girl. They researched many different therapies until they came across an interesting one. It was to do with pets.

Some sources said that pets could often help children with ASD feel more comfortable. This means they may even be more open in expressing their feelings. They had a perfect idea.

Cats were apparently the best kind of pets for kids with ASD to have. They didn’t even hesitate, they needed to get her a kitten.

They found the perfect cat. They found a Maine coon named Thula that was a year old. They had no expectations but were willing to do anything for their child. But soon they would find out what was going to happen.

As soon as Iris met Thula a bond started developing. Iris was so happy to have a new friend that was just like her. The cat also fell in love with Iris immediately.

Iris walked around the house with the cat while it explored the new spaces available to her. But this was just the beginning, things would change drastically.

After a week, Thula started to meow at her new owner whenever she needed something. But the best first step was that Iris understood Thula’s meows.

When the cat would meow, Iris would run to the kitchen and tap her mother. She was trying to tell her that Thula was hungry. This was an amazing start, but thing something unbelievable happened.

Iris loved to paint, it was one of her favorite hobbies and she would do it when she felt overwhelmed. She started to paint with her new pet who would watch the canvas as the shapes took form.

But the cat seemed to be different one day. She could have wanted her owner to give her more attention or maybe she was bored. Iris’ parents watched from the door, but then something happened that they could never have anticipated.

“Sit, kitty!” Iris said. Those were the first words her parents could remember her saying! It seemed like Iris understood all the principles of language but hadn’t been able to bring herself to use it until now.

The cat obeyed her immediately. The whole scene was amazing to see for Iris’ parents, who instantly felt their hearts jump when they heard their child utter her first words. And that was just the beginning.

From then on, Iris had an easier time dealing with daily tasks, communicating her desires, and avoiding getting overwhelmed by her surroundings.

Thula has really served as a therapist to the little girl, who has found her best friend in the feline companion. This is how her parents recount how things have changed since the cat stepped into their lives:

Everything Changed Since Thula Moved In

“Ever since we came home with Thula, this precious, magical kitten has cast a spell over Iris,” Arabella Carter-Johnson, Iris’ mom, writes in her book ‘Iris Grace: How Thula the Cat Saved a Little Girl and Her Family.’

“They sit beside each other as Iris paints, and new doorways to communication have been opened, doors we had previously feared might be locked forever.”

“Thula has lowered [Iris’] daily anxieties in life and keeps Iris calm,” writes Arabella. “But equally has the effect of encouraging her to be more social. She will talk more to Thula, saying little phrases like ‘sit cat.'”

And that isn’t all. Now, Iris wakes up excited every morning to play and enjoy the company of her fuzzy best friend.

“Iris is more active first thing in the morning now. Before Thula, it was always hard to get the day going. She is easier to get engaged in activities, and there have been changes out on our bike rides.”

“Whatever activity we are doing, Thula is there and wants to help and be involved. Waterplay, playdoh, painting, bike rides, iPad, puzzles, marble run, drawing… she offers Iris her companionship and friendship and supports me in encouraging Iris to interact.”

She Even Enjoys Baths

Thula has even helped Iris start liking baths, which is often something difficult for parents of toddlers. “Iris has been through a stage over the last year of hating baths and having her hair washed. Thula has been getting in the bathtub with Iris and even letting me shampoo her as well to help Iris.”