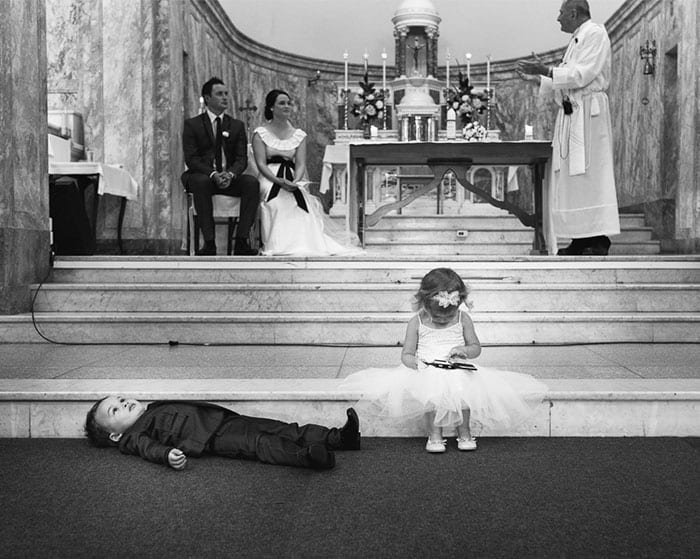 Kids at weddings are hilarious: you can see every emotion on their little faces, and most of the time they’re miserable. If you’re planning a wedding and want everything to go perfectly, here’s a piece of advice: don’t invite kids.

We repeat: If you want your wedding to be perfect, make it a child-free affair. Children are always unpredictable, and kids at weddings are no different.

We don’t blame this little one though – weddings are long!

What upset this little guy?

Let’s just hope the actual rings weren’t on pillows, otherwise, the entire wedding party may need to start looking under the pews to see where it went!

You never know if it’s going to rain, snow or sleet, or when something (or in this case, someone!) will cause chaos in the background. For those reasons, if you’re the control type, make sure you have an indoor wedding.

We can’t tell if it’s a runaway flower girl, or just a bored child running around as the lucky couple attempts to complete their vows with all eyes on them.

This is one of the funniest wedding moments we’ve ever seen. The kid looks old enough to know better (ie, don’t jump on a woman’s dress), but that train does look super fluffy, and as though it’s asking to have someone jump in it!

In situations like this, we can only hope that the bride is related to this little stuntman, or at least very good friends with his parents.

Kids love being the center of attention, which is another reason not to have kids at weddings: they get jealous when all eyes aren’t on them!

This cutie first stood in front of the couple, and when she realized all eyes were looking up and not on her, decided to put on a little show.

The mix of sheer terror and exhaustion on this little girl’s face is priceless. Anyone who has ever been in a wedding knows firsthand how tiring all those photos can be: the smiling, the posing, the fake laughter.

We don’t know if she’s terrified the day will never end, or if she’s just too tired from plastering a fake smile on her face.

What would otherwise have been an adorable candid photo turned into something else… It’s still a candid, yes, just not as cute!

Kids can be so gross sometimes, and kids at weddings are no exception.

Weddings are fun, but by the end of the night, you just want to go home and get some sleep!

This little one looks like he had a lot of fun, and now has his bag and is ready to peace out.

This kid seems to think the aisle is a slip and slide! That, or he tripped walking down the aisle and then decided to lie down and take a nap.

The reaction of the guests it quite hilarious, too.

This kid isn’t even trying to pretend he’s having fun or trying to subtly pout: he wants everyone to know that he is not enjoying this wedding one bit!

Let’s hope the bride and groom didn’t have that same expression.

11.) Parents Are So Embarrassing

This little flower girl is none too pleased with the toast going on behind her; either she feels left out, or does not approve of the beer can toast!

We’re assuming those are her parents behind her, which just goes to show that even at the young age of three parents can be embarrassing.

12.) Happily Ever After For All But One

What a precious photo. Even the little boy with his head in his hands just adds to the adorableness here!

We’re hoping he’s just exhausted from having his photo taken all day and not in disapproval of the wedding.

This little boy does not want the groom to remove the bride’s garter belt. He’s so adamant about it, he pulls the groom out from under the bride’s dress and starts to beat him!

Do we think he’s the brother of the bride? The son? Whatever the case, he does not appear to support this wedding.

Have you ever been so tired you needed to just lie down and take a nap, no matter where you are?

Kids at weddings do, as evidenced by this little girl who needed to just lie down and take a nap on the dance floor.

Even babies are turned off by PDA (public displays of affection). Normally we’d agree with this kid – save it for the bedroom! But when it comes to weddings, PDA is not only approved, it’s expected.

This sour-puss needs to just get over it.

Boys love their cars and trucks, and it starts at an early age.

Let’s hope this little guy gets over his truck obsession before his own wedding so he can keep his eyes on the bride without distraction!

Weddings can be a scary thought, especially for the flower girl: she’s on her own, with a hundred or so people smiling and staring at her, and she had no idea what she’s supposed to be doing. We’ve had moments like that where we just want to cry too!

If only the rest of the guests had pillows this could have been a good idea, but unfortunately, that ring bearer is having a pillow fight for one.

Similar to the previous pillow-throwing ring bearer, let’s hope the rings weren’t actually attached to that pillow when it was thrown.

19.) Sometimes You Just Need a Friend

As we said earlier, weddings can be scary for flower girls and ring bearers! Thankfully this little girl had someone older to hold her hand and walk her through the ropes, but it doesn’t look like it calmed her down much.

Maybe she’ll do better in her next wedding.

This little boy looks like he’s been in a wedding before and knows the drill, and isn’t too happen to be participating in another. Or perhaps he’s trying to block the camera flashes?

At least the little girl is doing well and seems to be enjoying herself!

These kids at weddings made us laugh!

Most kids do not understand how important a wedding day is! Click the next button to see more hilarious kids!