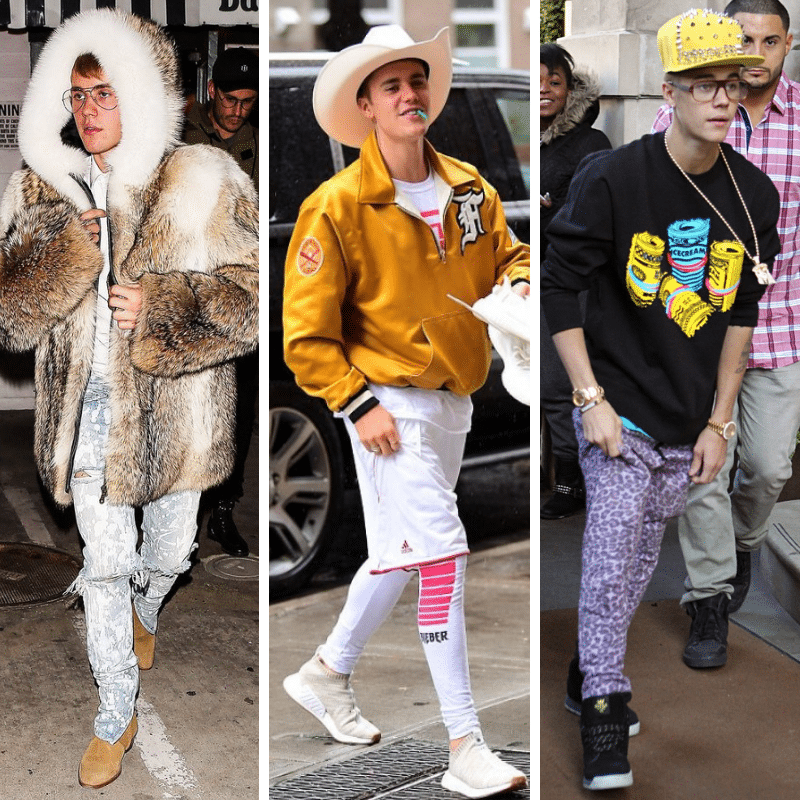 One thing we can give Justin Bieber credit for is that he is never afraid of trying out new styles. From the day he started as a preteen YouTube sensation to the day he was filling entire arenas with devoted fans, he never backed down on his choices. And you know what? We applaud him for it.

However, Justin had some fashion mishaps and faux pas that could have been avoided but that the internet still remembers.

Here are all the Justin Bieber outfits that sent the internet and the fans into a spiral trying to figure out their aesthetic, but that the superstar doesn’t regret, at all.

Our picks of the craziest Justin Bieber outfits:

All celebrities, especially R&B singers, take on a quest to find the perfect hat for their figure. While we all remember the countless flat brim caps that Justin was sporting, this one particularly stands out.

You might notice the spiked yellow hat at first, but two details will catch your attention quickly: the leopard-print harem pants and the two(!) gold watches. Now he doesn’t have any excuse to be late to his appointments.

The next item in what we will call The Hat Experiment is the fedora.

Pharrell Williams was the reason behind the brown fedora hats craze in 2013. But did all guys look good in it? Sadly, no.

Is it an improvement or a step back? You be the judge.

Is Justin channeling his inner Canadian here? We get the ushanka hat and the patterned socks; it looks fun and different. But we don’t know how to feel about the items between the hat and the socks.

The short-sleeved shirt and rolled up pants are kinda throwing us off.

When you’ve spent too much time pondering which look to choose for the day, Justin Bieber has the answer for you: Don’t pick, combine.

This new modern cowboy aesthetic isn’t an everyday look, and describing this outfit as “flashy” would be an understatement.

16.) Ladies, Justin Is Here to Steal Your Hearts

When you’ve covered your head with all kinds of hats, it’s time to start covering your entire face!

Putting on a balaclava might give people major gangsta vibes, but the Chanel logo and pointy little cat ears make it weirdly adorable.

For a very long time, J.B. took his hip-hop concept out for a spin and tried almost all clothes combos one canimagine.

The public was the judge, and even if his Beliebers were backing him up strongly, the rest of us were underwhelmed by some of his choices.

When J.B. showed up in a waist-length lavish fur coat at the end of 2016, the internet instantly slammed him.

PETA and several other social media accounts lashed out at him for wearing what seems to be real fur, and the NGO even called him a “caveman.” Woah!

Bieber went hell for leather during this concert!

This all-black outfit is actually not so bad; monochromatic #OOTDs have their own charm, but we can’t help but feel stuffy seeing that leather neck scarf. What do you think?

During the MTV EMAs in 2015, Justin literally painted the town red when receiving his Best Collaboration award on stage.

Who careswhat you’re wearing when you’re piling up award after award anyways, right?

Justin decided to go all white on his Believe tour, with splashes of gold here and there, as in these fingerless gloves and studded shoes.

We don’t know if it’s the wind’s doing or if this is the actual the shape of these shorts, but there is something comical about them.

We bet you can hear a whoosh sound coming out of them.

9.) No One Can Miss Those Lilac Pants

Justin Bieber is constantly challenging the paparazzi and the fans to come up with labels for his outfits. And it’s not an easy task.

How would you describe this style?

Does Bieber have enough confidence to show it to the world? Oh yeah. One might even say he’s got overflowing confidence. Does it look as good as one would hope? That’s another question.

7.) Bieber Back at It Again with the Low-Hanging Shorts

How many times has J.B. been caught hanging onto his pants and shorts?

6.) You Don’t Dress Up for the PM, the PM Dresses Up for You

After many awards, it was time for the superstar to add a Diamond Jubilee Medal to his accolades.

But wearing overalls—with one of the suspenders detached—and a cap to meet Canada’s PM wasn’t the smartest move in Justin Bieber’s career, even for an international popstar like him.

The star casually and confidently wore denim jeans underneath shorts and carried on with his day.

Confidence can get you a long way.

4.) Layers and Colors: A Sequel

We said it before and we’ll say it again: No matter the style, the fabric or the color, everything can be mixed. According to Justin, of course.

During a car karaoke with James Corden, J.B. revealed, amongst other things, that he never wears the same underwear twice.

Is this why he wants to show ’em to the world whenever possible?

We don’t know where and when this picture was taken, but it seems like many things were unfolding there.

Justin can go all the way in to explore all the possibilities the fashion world has to offer him, and while we shoot quizzical looks and curious comments all over the internet, we can’t help but admire his confidence.

Does Justin Bieber mind the fashion police, though? No. And he says you shouldn’t, either.

During their car karaoke, Justin Bieber made a smart remark after James Corden spoke about a photographer’s long shirt. Justin joked: “I’m kind of wearing a dress here—this long shirt.” So he knew!

But more interesting is the truth bomb he dropped after James told him he can’t wear the type of clothes the popstar sports: “You know what? That’s your problem. Your problem is, ‘I can’t do this, I can’t do that, I’m gonna look silly,’ because you’re in your head… But all swag is is confidence.”

Well, well, well, our Justin has quite some wisdom in him after all.

What do you think of these Justin Bieber outfits? Do you think you can wear something similar someday? Do you know any other celebrity with a peculiar sense of fashion? Let us know in the comments, and make sure to check our next article with all the breakups that Hollywood never saw coming!