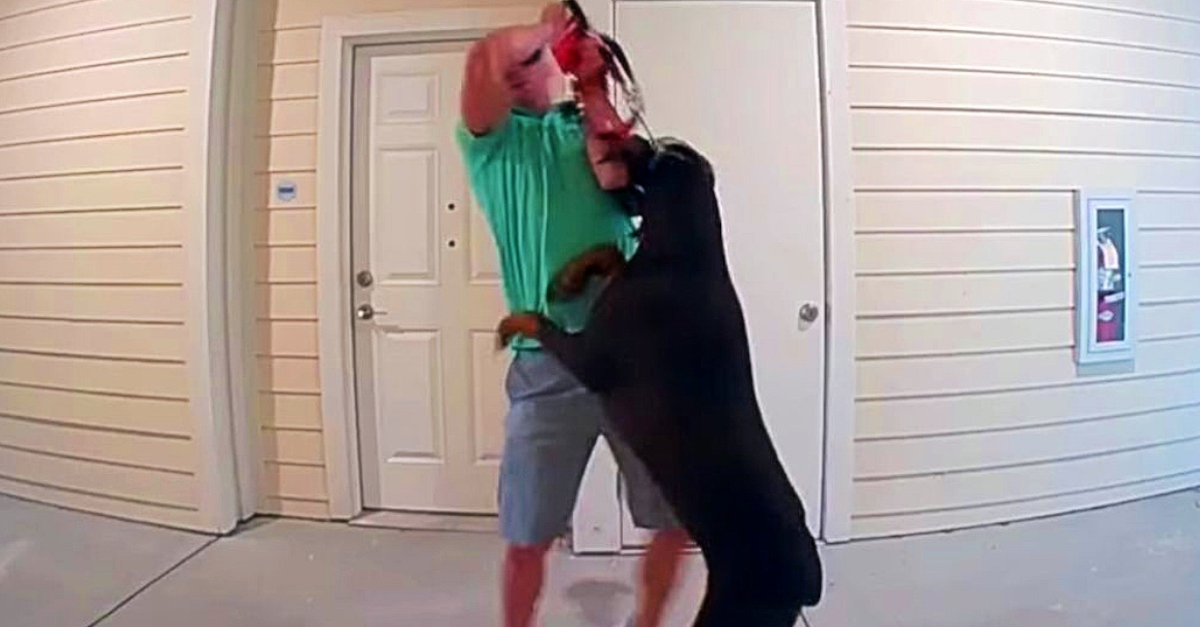 She clutched the phone as if her life depended on it. Her heart was pounding and she felt like she was going to pass out any minute.

She stood by helplessly as the man from her surveillance camera broke into her home and stole her two beloved dogs.

The Kimble family was your average suburban family.

Marietta and Joel Kimble did their jobs, paid their bills, and had the occasional night out. They had two beautiful dogs and they saw them as part of their family. Usually, they would take their dogs with them whenever they leave the house but not that day. There was something different about that day…

The Kimble’s wanted to change up their home a bit. Visiting the Home Depot was first on their to-do list, a store that’s not very pet-friendly.

When it was time to leave, Marietta kissed the dogs goodbye and told them they would receive a treat if they promised not to pee on her new carpets.

Once they arrived at the store, the couple quickly forgot about the possibility that their dogs might mess up their carpets. The store was huge with so many options to choose from!

They were busy looking at paint colors for their bathroom when Marietta’s phone went off.

This was connected to their security system at home. This wasn’t a blip alerting her to the presence of a delivery person or children playing too close to her house. It was a different message. She took out her phone to check out a live feed from her front porch. The lens was smeared with a yellow stain.

Mark had been jogging the same route for many months now. The houses were nicer and the ground was flatter, which is why he preferred it.

He doesn’t like unnecessary attention, so Mark goes out of his way not to bother the residents. But that day, one of the houses looked different. Intrigued, Mark stepped closer to get a better look at the house.

This house resembled the rest that was on the street.  Big and expensive!

However, something was different with this house… Two puppies saw Mark and started barking uncontrollably. It was clear that they were alone in the house.

There wasn’t a lot of time. Mark had to do something right away.

Mark opened his backpack and took out the cloth he uses to wipe sweat from his face. He folded it up in his fist, put his palm near the window, and hit it as hard as he could. He was well aware of the first items he would take.

He took the two puppies and ran out as fast as he could.

A buzzing and a beeping noise suddenly came from behind him. Then, through a little speaker attached to the door frame, came a voice. A camera was present. Someone was watching him.

Crying In The Store

Marietta started crying uncontrollably. She was seated on a bag of cement trying to stop what felt like a panic attack.

She couldn’t believe it. She was stuck in a Home Depot while watching her poor dogs get abducted by that jogger. Why would he do that? Marietta felt so much anger towards the man in yellow.

Why Not Take Everything?

She slammed her fist against the speaker icon, hoping he’d hear her.

The man turned around as she was speaking. So he can hear her, good Marietta thought. “There’s a cat and rabbit too!” she yelled. However, the jogger did not want to steal from the Kimble family, he was there to save…

Marietta had no idea at the time, but Mark’s daily jog had been timed by fate.

He went by the house as soon as smoke started to pour out of every nook and cranny. Somehow, the house was on fire. Her notice had been the alarm and Mark’s heroic entry to save the animals.

She watched as Mark didn’t hesitate and sprinted back into the house to retrieve the other two animals.

She didn’t care about the building. They had insurance and everything of value was in the fire-proof safe or stored digitally on the cloud. The only thing that mattered was the rest of her and Joel’s family. By the time she got home, she was a nervous wreck.

Mark sat on the lawn, making sure the animals didn’t escape out of the boxes he had found to keep them in. She didn’t even care about the fire truck.

She threw her arms around him and thanked him over and over. There weren’t many people in the world who would run into a fire just to save someone else’s pets.

Comments came pouring in about Mark’s bravery. Marietta promised him at least a super luxurious dinner out, paid for by her and Joel, to say thank you. IT was the least they could do for someone so amazing.