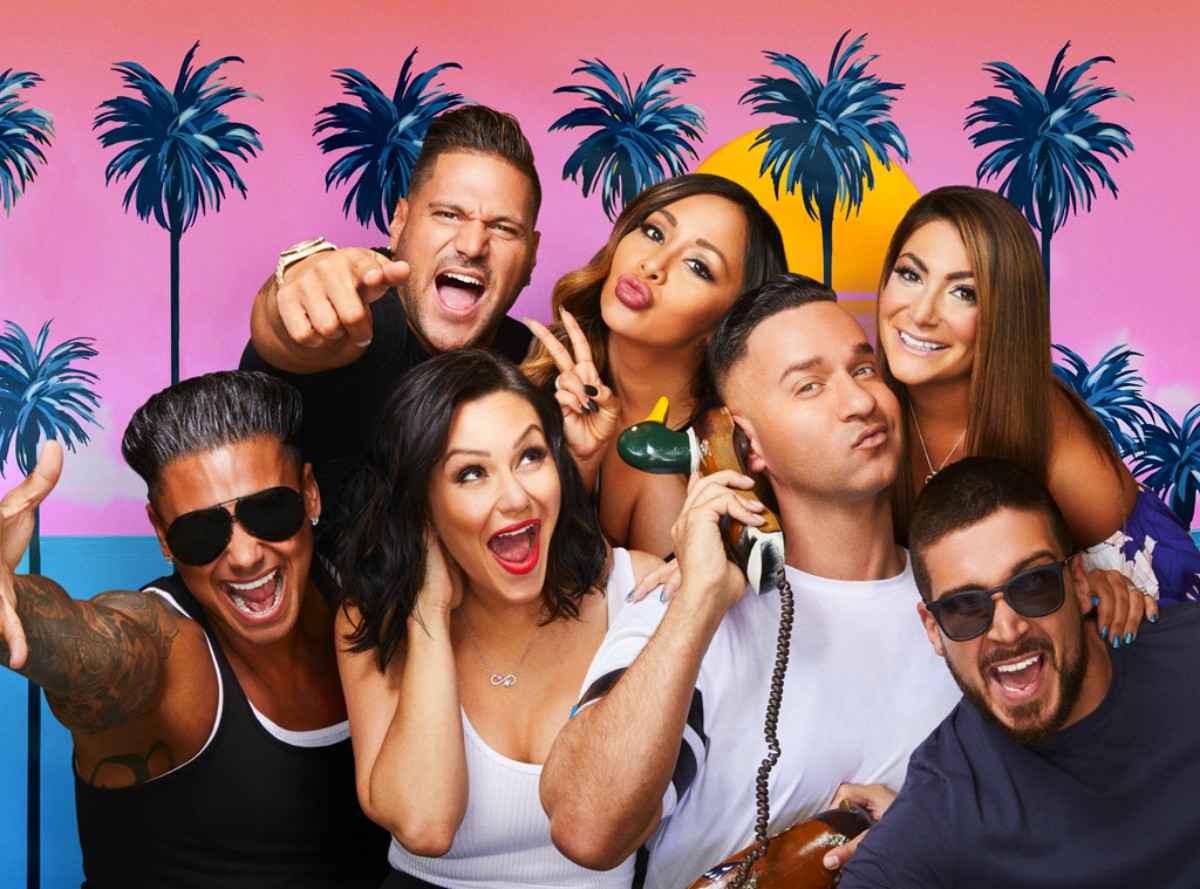 It may have been six years since we last saw our favorite Guidos and Guidettes but the Jersey Shore phenomenon is still alive and kicking. And why would it be any less hype after all these years? Critics described the MTV reality show’s ratings as “nuclear,” and every season seemed to break another record.

It’s easy to see why viewers were glued to their TV screens every Thursday night. The cast of Jersey Shore was crazy! If JWOWW, Sammi and Snooki happened to be awake, they were either brawling or gossiping. Meanwhile, The Situation and his boys kept to a tight schedule of (wait for it) … GTL — gym, tan and laundry, for the uninitiated.

The reunion of MVPand the height-challenged Meatballs airs on April 5, so we gotta do The Shore right. In celebration, we’re counting down the best Jerzday moments.

From GTL to Pauly D’s stage-five clinger and begging for Ron to “stahp,” see which moment made the cut. 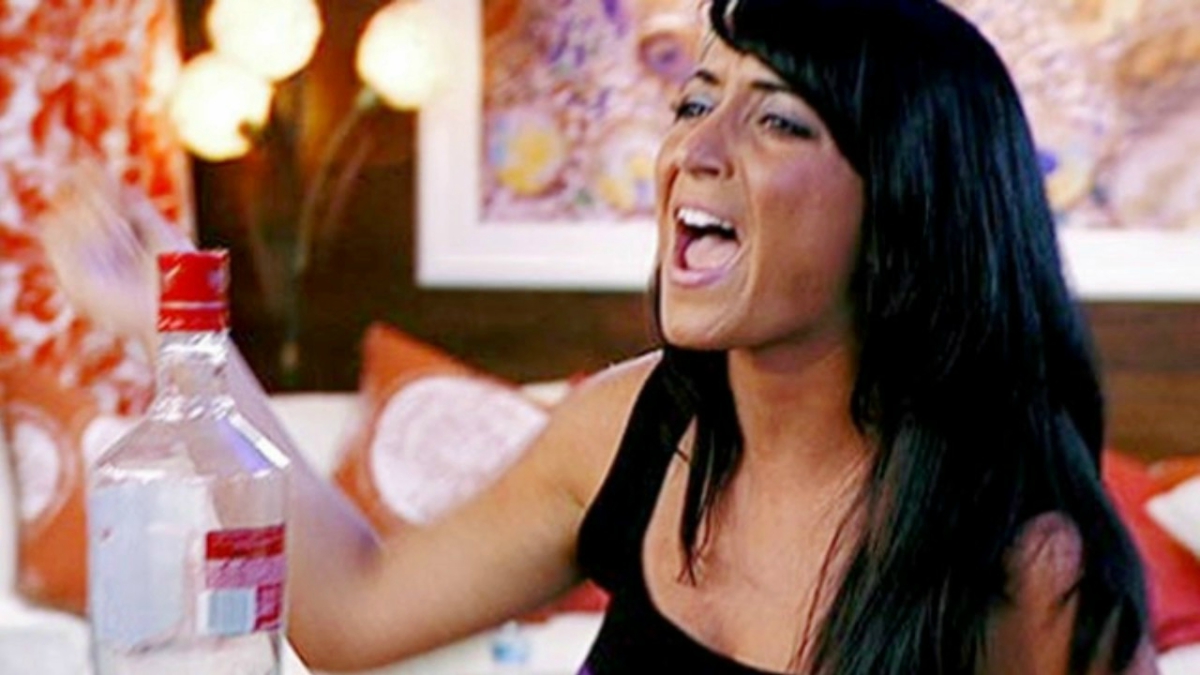 We have to start the list off right – that’s by getting rid of Angelina.

If your recollection of her is hazy, that’s perfectly acceptable. The self-proclaimed “Kim Kardashian of Staten Island” never stayed longer than a few episodes. Even that seemed like too long of a stay for the girl surrounded by drama.

Don’t think she’s that bad? Angelina’s best moment (i.e., the onlytime she wasn’t causing drama) was Season 1, Episode 1, when she walked in with her clothes in garbage bags. In the words of Pauly D, “You can’t find a suitcase? No one in your family has a suitcase you could borrow?”

Other than that, things only went downhill from there. She fought with Vinny, was a sloppy mess (and fought) with Pauly D, and had a catfight with Snooki. YEAH. Angelina’s continuous departure was always the best. Buh-bye! 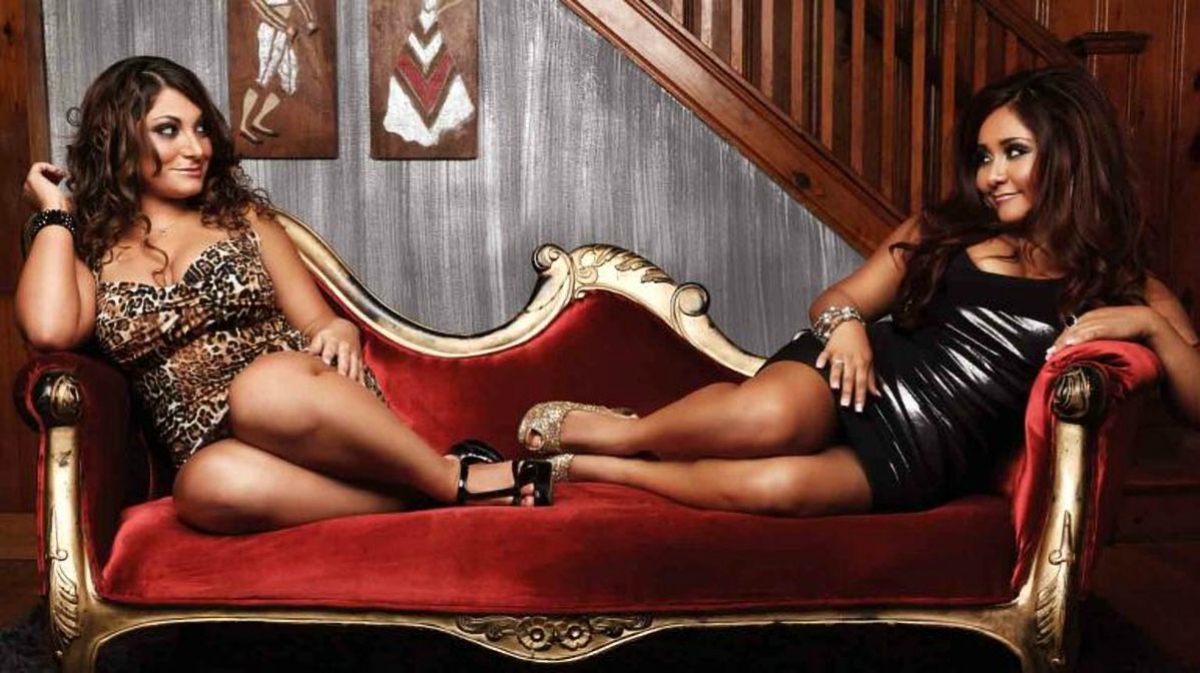 Audiences didn’t know then, but they had been missing an extra dose of Snooki antics. “Blast In a Glass” Deena was Snooki’s BFF off-screen. When MTV gifted us all with another petite tanned person we should’ve known things were going to get WILD.

Deena’s first memorable moment was her first night at the house, when she somehow lost her bathing suit in front of Mike. And that wasn’t the first or last time her bottoms lost hold of her body. Remember when the Meatballs got plastered before they went out clubbing? Snooki’s girl danced so hard her panties slid off her body again.

4.) T-Shirt Time, Or, Better Yet, Every Pauly D Slogan 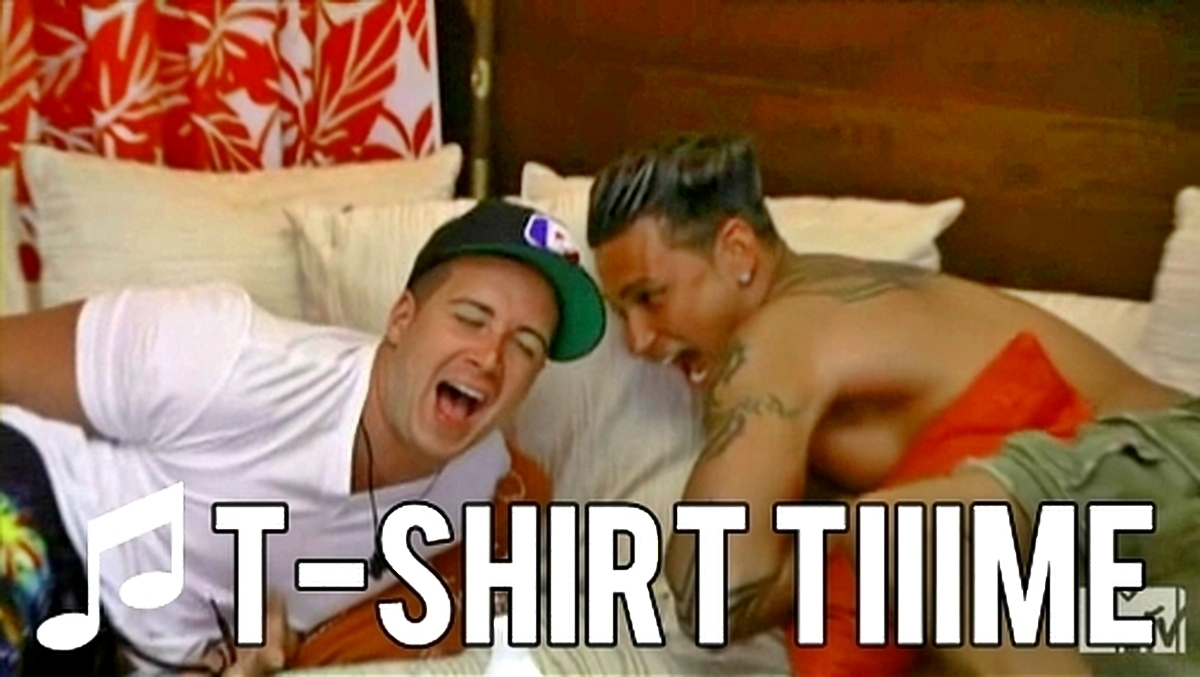 All the greats have them. Star Wars has its iconic theme song. Rocky wouldn’t be the same without “Eye of the Tiger.” And Jersey Shore has the sweet symphony of DJ Pauly D shouting his head off.

Because what else would go better with the mayhem within the house?

Pauly wasn’t trying to win a Grammy with his songs. They were pragmatic AF.

“It’s T-Shirt Time” meant the boys needed to change from their getting-ready shirt into their final club shirt. “Cabs are here” was an indirect way of saying, let’s goooo! In Season 4, when the cast went to Italy, Pauly’s sensibility goes one step further, in Italian. “Taxi sono qui!”

Don’t worry. Pauly gave himself some breaks from being helpful. “YEAH BUDDY” was his happy outburst. Yeahhhhhh, buddy!

Here’s another memory from Pauly D’s days on The Shore.

3.) Sammi and Ron Breaking Up Over and Over Again 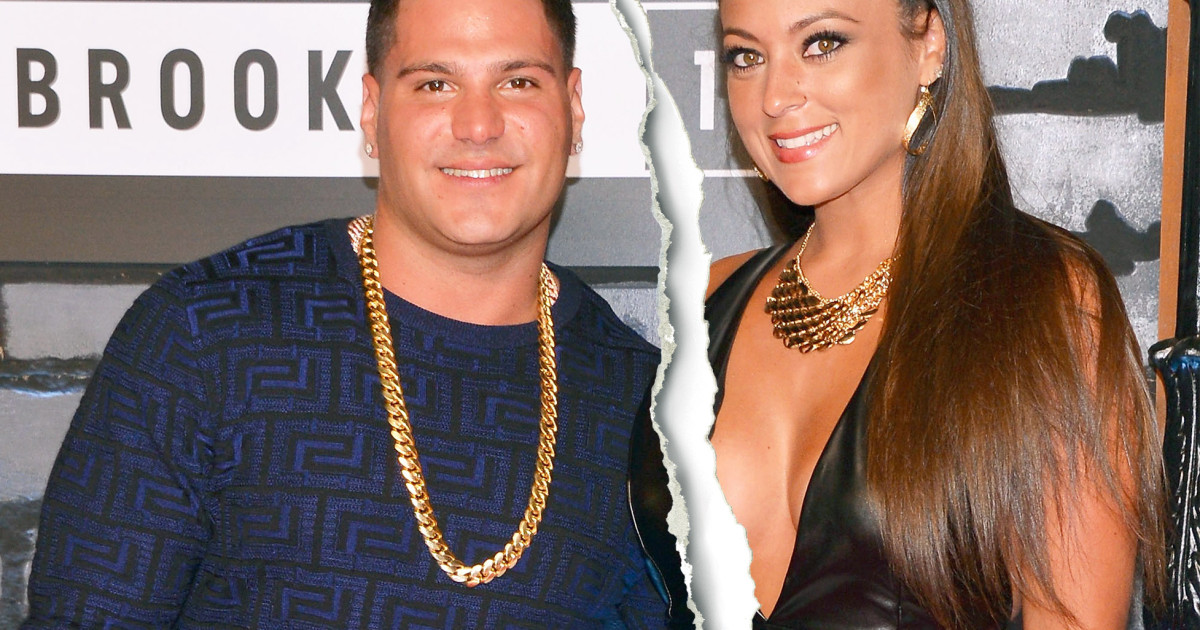 This one’s a guilty pleasure for sure. No one liked seeing Sammi “Sweetheart” ruin her perfect mascara over and over again. The up-and-down roller coaster that was Sam and Ron was just too wild to not invest in.

Sure, “Rammi” had its time in the sunshine. We awed when they went on their first date on the boardwalk, when they first … smushed? But that lasted about half an episode.

Drama between the couple was already peeking through on their first night out. Sam saw Ron dancing with another girl and retaliated by talking to another guy. Oh, and it’s the first out of a billion times to come that Sammi says she’s done.

Yelling and physical confrontation are at the forefront of their toxic relationship. When we viewers were already praying for the couple to make up their minds already, Season 2 came in with a punch!

Ron made out with two girls, at once, behind Sam’s back. Not cool! The rest of their “relationship” is like trying not to look at a car accident.

2.) JWOWW and Snooki Write an Anonymous Letter To Sam 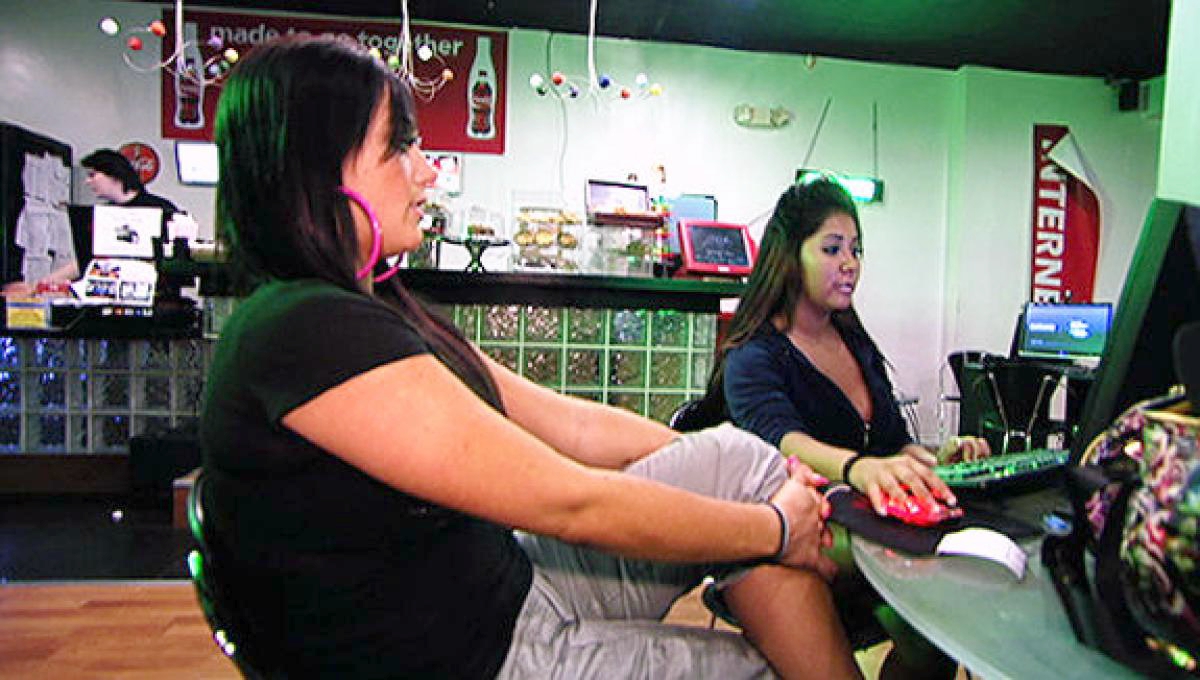 “Rammi” was so toxic that the surrounding Jersey Shore roommates could not help but get sucked in to the drama. Exhibit A, the anonymous letter.

Season 2 marked a change in Ron. He may have been a total noob at relationships in the season prior, but in this one he wants to have his cake and eat it, too. By that, we mean be with Sam and then fight with her to go meet girls with MVP.

Sorry, Ron, Snooki and Jenni are your girlfriend’s besties, and they saw everything. When Jenni and Snooki finally decided to let Sam in on her boyfriend’s dirty laundry, things seemed like they’d get better. Wrong.

The girls typed up the infamous letter. It began: “SAM, THE FIRST NIGHT AT BED WHEN YOU LEFT CRYING, RON MADE OUT WITH 2 GIRLS AND PUT HIS HEAD BETWEEN A COCKTAIL WAITRESSES BREASTS.” Yeah, all caps for journalistic integrity.

Alas, Sam found the letter and realized the entire house had lied to her. But, addicted to her relationship, Sam lashed out at the wrong people: Jenni and Snooki. She and Jenni eventually came to blows on more than one occasion.

1.) The Situation Vs. The Wall (Spoiler: The Wall Wins) 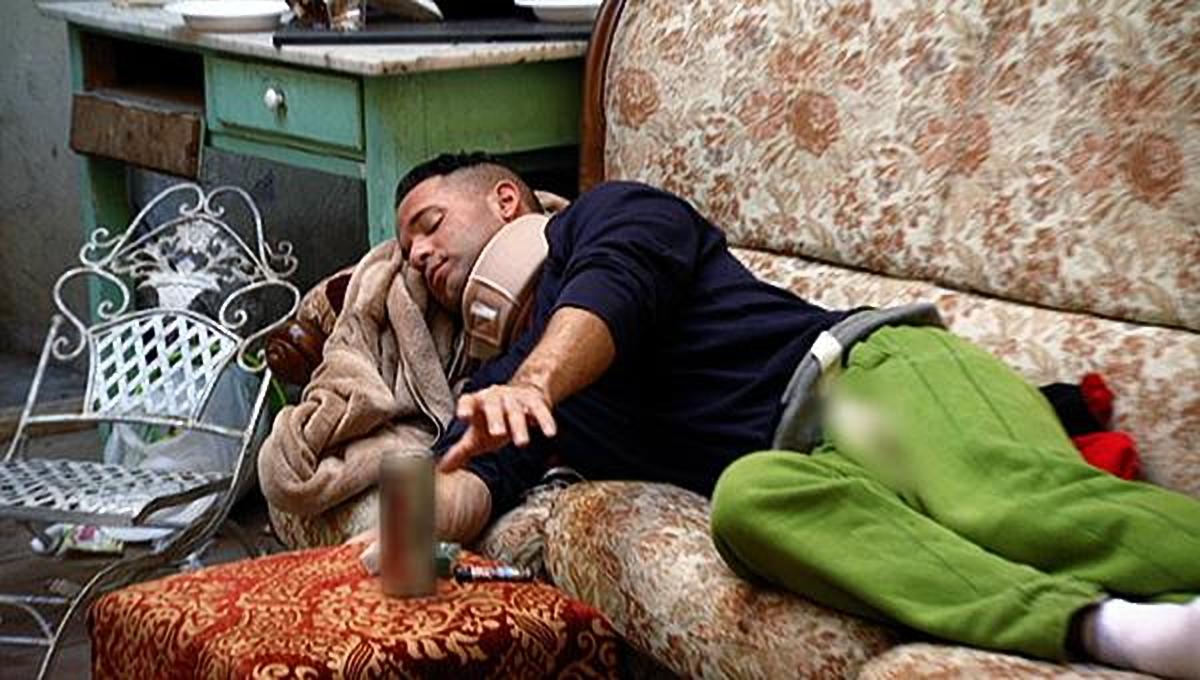 Every Jersey Shore fans knew Rammi’s toxicity levels were no joke. Every season they were together, things grew worse and worse. In Season 4, when the cast went to Italy, The Situation fell victim to Rammi.

It was yet another fight between Sam and Ron, this time initiated by Mike, which isn’t shocking. Dude loved to start problems.

Unfortunately for Mike, Ron and Sam’s relationship was hanging by a thread already.All hell broke loose after Ron heard that Mike told Sam that Ron was trying to hook up with other girls.

This time, Ron directed his insane temper to Mike. At that point, literally everyone watching was thinking, “Yesssss.” The fight had been in the making since Ron took Mike’s hopes of being with Sam away in Season 1.

Nevertheless, the epic battle we had all been waiting for started. In the blink of an eye, the match was over with … the wall being victorious? You got it: The Situation knocked himself out by smashing his head against the wall.

Are you ready for Jersey Shore Family Vacation? Love it or hate it? Let us know below!