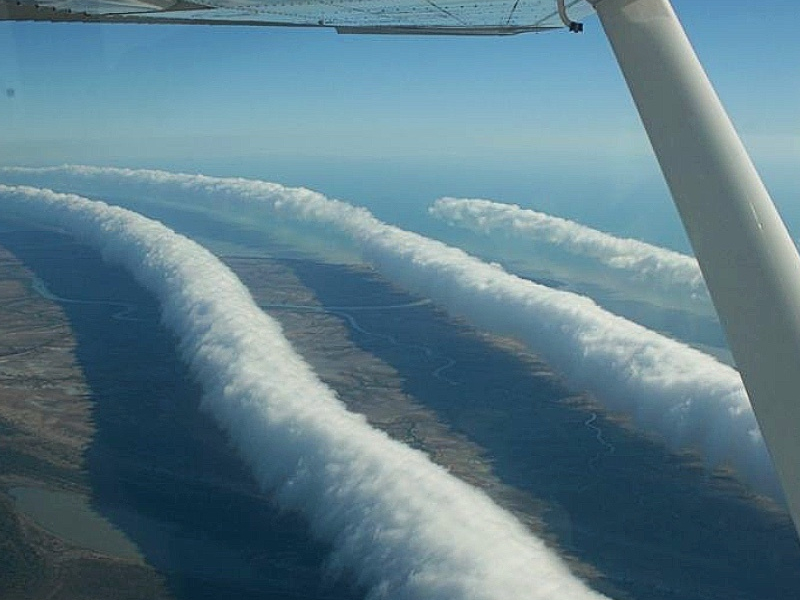 From unexplained phenomenon to animal behavior you can never unsee, there’s so much in this world that are more than a little jarring.

Let’s take a look at some of them that deserve a spotlight.

This one is very weird. First, the bendy trees are from the same set of saplings that grew the surrounding straight ones.

But, for some reason, over the 90 years they since they were put into the ground, a grouping of around 400 ended up growing in this distinct way.

Due to heavy rains in India one summer, something creepy happened.

Many spiders tried to find sanctuary in the sprawling trees. They ended up making their thick webs in the branches. Dust then settled over the sticky threads and made something that looks like it should be in a sci-fi horror.

They are also called “sailing stones”, and they can be found in many places around the world. However, Death Valley National Park has the most activity.

There are no concrete discoveries as to why, but these stone end up moving along the earth with no help whatsoever. They zig zag, go straight, curve … and can go upwards of 300 feet in one day! Some of the biggest stones wight around 700 pounds.

Okay, it’s not jarring, but it’s just too pretty to not include – since “solar pillars” can sometimes take on an ethereal feeling.

Basically, light bounces of ice crystals and reflect a beam of light upwards. It can happen off of manmade light sources but also from the moon.

Granted, there’s nothing mysterious about this one, but it definitely lands in the “jarring” category.

During mating season, garter snakes form writhing balls. In some North American parks there have been huge ones spotted. For anyone with a fear of snakes, this would be a nightmare.

The “Door to Hell” can be found in Turkmenistan.

This is a crater in a nature gas field … that’s been burning for decades. Yes … decades. Some say a Soviet oil rig fell into the crater in 1971, and a geologist decided to get rid of the rig by setting the pit on fire. All we know is that soil samples contained extremophile bacteria – the stuff found in Arctic glaciers and deep ocean vents.

If you have Trypophobia, you might want to skip this one.

For most of the year, this lake in British Columbia looks like any other. But during summer, the water evaporates and the combination of briny water and mineral deposits. What’s left behind are the shallow, multicolored pools that will either make you gasp in awe or cover you eyes.

It might not sound that exciting, but keep in mind this interesting phenomenon wasn’t discovered until the 1960s. Can you imagine the surprise on those diver’s faces? Nature is so amazing.

While scientists have figured out regular lightning storms, they have quite figured out the volcanic versions.

Since they can’t get close to an erupting volcano (duh), it’s hard to understand what causes this, they are just left with educated guesses. Spewing magma is already scary if you’re up close and personal with the event, but adding in some lightning strikes is terrifying.

It’s common sense that we should respect Mother Nature, but once in a while people can forget that some animals are not as gentle as they seem.

There have been more than a few cases of octopi latching on to sailors or divers. One even enveloped a diver (gear, camera, and all) and tried to drag him away.

At first glance, someone would think these clouds had been pierced by something from the heavens.

But did you know it’s all because of pure water? That’s right pure H2O doesn’t freeze – even at very low temperatures. But if a piece of ice or even a spec of dust enters this area, the vapor will instantly crystalize.

These hills lay in the prairies close to Olympia, Washington, and were discovered in 1841.

At first, researchers thought they were ancient burial grounds, but when they dug into them, they found nothing. Theories skyrocket into anything from seismic formation to gopher digging. To this day, no one knows why these huge, oval hills form just in that area.

It might not seem like much on the surface, but once a year the waters along the South African coast become a hotbed of marine activity.

Sardines are forced to migrate with the ocean’s warm water streams and end up clumped in one particular bottleneck along the coast. Then, dolphins, sharks, whales, and diving birds all collide in a terrifying feeding frenzy.

If you think of Starlings, you probably think of Hannibal Lecter’s speech on deep and shallow divers.

While the facts he gives are true, there’s more to their movement. Most researchers think that the coordinated and elegant change in movement comes from their need to avoid flying predators. The thing is, they move that way even when there’s no danger.