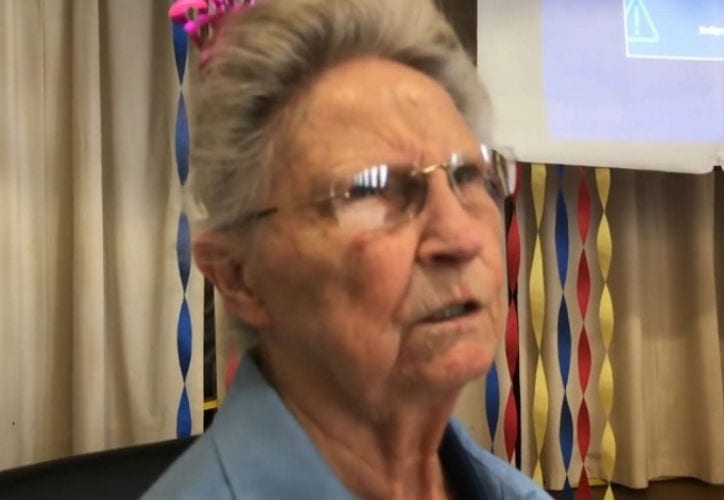 Hearing her name, she started to become anxious as she walked towards the door. What on earth could they want? and why did she have to appear in front of the entire assembly? her heart started to pound and she could feel her face flushing.

As she moved to open the door, she started to panic. Had they discovered her secret?

A Mentor And Custodian

Frances Buzzard was a janitor at Belle Elementary School, and the children all loved her. She took her job as custodian very seriously, and she also tried to mentor the pupils as much as she could.

Just being around the children energized her, and at a ripe age of 77, she was still capable and enthusiastic. At least, she thought so.

One day, the school’s principal did a little digging into Frances’ past. She felt guilty about it, but she reminded herself that it was absolutely necessary for her plan to go without a hitch. And then she made a discovery about Frances that would change the janitor’s life.

Little did Frances know that circumstances had aligned perfectly to turn her world upside-down.

On that fateful day, the school’s principal packed all 200 students into the assembly hall. It was of utmost importance that they were all there to bear witness to what was about to unfold.

The children were all uncharacteristically quiet, and the silence was deafening. The principal was filled with glee as she spoke Frances’ name over the loudspeaker to summon her.

When the principal of Belle Elementary School had unintentionally found out what Frances had been hiding from her for all those years, she knew something had to be done about it. Things simply couldn’t continue as they had been.

She regarded her plan as an intervention of sorts, and soon the entire school would know the truth.

Frances was going about her day, as usual, polishing floors and scrubbing the kitchen until it gleamed. Then she was summoned by name over the loudspeaker to make an appearance in the assembly hall. She wondered if there was some sort of mess she was supposed to clean up there, but there was something off about the whole situation.

She could feel it in her bones and her stomach knotted with dread.

Frances walked toward the closed door of the assembly hall as if she were walking on eggshells. Whenever she had been called over a loudspeaker in her long life, it had never been for anything good.

She had been struggling a little lately. She knew she hadn’t been performing duties to her best ability. But then, something else dawned on her.

Frances looked at the closed door of the assembly hall and saw that it was booked for this timeslot — there was an assembly in progress.

The thought of all the eyes watching her was enough to make her feel nauseous. She knew that the hall would be filled with students right now. That meant that whatever her misdeeds were, she would have an audience.

While she opened the door, slowly, all manner of scenarios ran through her mind. Had there been a complaint about her from one of the pupils? Was she now being forced to retire, or worse? Was she being dismissed?

She racked her brain for the reason she was being called out in front of the entire school, but she could only think of one.

She opened the door to a sea of silent faces, with all eyes on her. Her palms started to grow clammy, and her mouth became dry. She didn’t enjoy all of this attention on her and was preparing to be publicly scolded from a dizzy height.

She braced herself for the words, but what she heard left her completely blindsided.

Why Had They Called Her?

She couldn’t believe the lengths the principal had gone to. Her heart thudded in her chest and her face began to flush. And why had the children been included?

Surely, if she was about to get fired the principal would have spoken to her in private? Frances really didn’t know what to think. Then, the children revealed all with four words.

Bracing for the worst, Frances was ready to be berated. Then, the children started to sing “Happy Birthday” in unison. Frances was dumbstruck. Her birthday wasn’t for another week! And how had they even known her birth date? She hadn’t made a point of telling anyone.

In fact, she was not used to celebrating her birthday at all.

It turned out that the surprise birthday party had been the students’ idea, and the principal was happy to oblige.

Frances had been a loyal and hardworking employee of the school for so long that it was only fitting that they celebrated her life. So she got to work and found out her birth date. But that was not all she discovered.

The school’s principal had found out about Frances’ big secret: she had never had a birthday party in her life. This saddened her greatly, and she knew immediately that she had to take action to make things right.

So she put her plan into action, ordering personalized cupcakes and even assisting the schoolchildren in creating a special slideshow in honor of Frances.

When Frances slowly entered the hall, she was greeted warmly by the principal.

“Surprise! Happy birthday, Ms. Frances. We know it’s next week but you won’t be here. So, we’re celebrating today. Come on in!” And Frances’ surprise was written all over her face. But the surprises weren’t over yet.

With Frances now seated, the slideshow began. There were photographs of historical moments in history, such as the moon landing and Woodstock, and Frances had been photoshopped into the scenes. It was the perfect commemoration of her life and a compliment on her 77 years on the planet.

When Frances saw it, her eyes filled with tears of joy at the message and the effort that the students had made.

Frances had never had a birthday party because her parents had been poor when she was growing up and they simply couldn’t afford it.

“I don’t remember any. They didn’t do things like that. We didn’t have Christmas parties either. They would get us fruits and nuts when they could afford it,” Frances explained.

Imagine going through 77 years and never knowing the joy of being celebrated on your birthday?

Frances had never made a big deal or a fuss about the date. She was brought up to be grateful for what she had. her parents had never been able to afford birthday gifts, cake, or any of the things most of us take for granted.

“So, this lady is twice our age, but she does three times the work. She’s something else. Everybody just loves her. You can’t get her to stop,” School counselor Chelena McCoy told the Charleston Gazette-Mail in an interview.

Frances was so well-loved by pupils and staff that they knew they had to do something to celebrate her.

Frances was filled with gratitude at having her first-ever birthday party at age 77. She really was the center of attention that day, and it’s one that she’ll remember forever.

It is extremely important to show appreciation to the people in your life, and kindness does everybody a world of good. Even the smallest gestures make a difference. Netizens were so touched by the story that it went insanely viral.

Frances’ surprise birthday celebration was televised by the Charleston Gazette-Mail, and the story gained a lot of traction online. From there, it was shared thousands of times on social media sites. Soon, people from all over the world were joining in to send her wishes.

“Absolutely beautiful!!! That smile was so full of joy. It’s obvious that she touched the lives of so many. What a perfect surprise!!! Happy Birthday Miss Frances!!!” one Facebook user wrote.

“This was such a heartwarming story for that lovely lady’s birthday. It was so special since she had never had a party in her 77 years on this earth. So awesome.”

In fact, students and school principals everywhere were so inspired by the surprise birthday party that similar stories began cropping up in the news.

Haze Mabry is a janitor at Pike County Elementary School in Georgia. The 80-year-old member of staff went into work one day expecting to clean up the trash that the students had left behind.

Although Haze has worked at the school for 13 years and all three of his children graduated there, he feels that the students at Pike County Elementary are “like children of his own.”

Haze had always given the students of the school special attention – which is why he is considered “the most loved person” at the school.

That’s also why the students decided to come together to arrange a special surprise for their janitor’s 80th birthday. When Haze entered the building on that fateful day, he couldn’t believe his eyes.

Haze was astounded to see more than 800 students waiting to greet him that morning. All of them started chanting his name as soon as he stepped inside the school.

Then, the students began to throng around him, handing him birthday cards, singing “Happy Birthday” and holding up banners for his special day.

Haze was completely overwhelmed by the students. He was handed so many birthday cards that a few of the youngsters had to follow him with a bucket to collect them all as he made his way through the hallways.

Pike Elementary School also took photos of the janitor’s special day, which were shared on their social media page. Just like Frances’ story, Haze’s reaction to his birthday surprise spread like wildfire.

Soon, the pictures had been shared hundreds of times across social media channels. People everywhere were touched to see such an act of kindness – and it’s not hard to see why.

“Need to see more of this on Facebook instead of bad news and or evil statements of hate being posted,” one Facebook user pointed out. The general consensus is that people would prefer to see uplifting and feel-good stories in the news.

And it’s true – exposing yourself to too much negative news can negatively impact your overall mental health and wellbeing.

A Disproportionate Amount Of Negative News

With so much exposure to television, social media, and online news today, people need to consider their level of exposure to negative news.

Most media outlets pursue better ratings by reporting on a disproportionate amount of negative news. In fact, according to data gathered by the Pew Research Center, most media outlets are more inclined to report on bad news. But how does this affect our mental health?

A Negative Impression Of The World

While keeping abreast of current events is a way to stay informed, negative news about disasters, suffering, war, and economic crises actually changes our perception of the world. People exposed to more negative news suffer from higher levels of anxiety and depression.

Instead of consuming a constant stream of negative news, people should try to balance their sources with positive media outlets and stories.