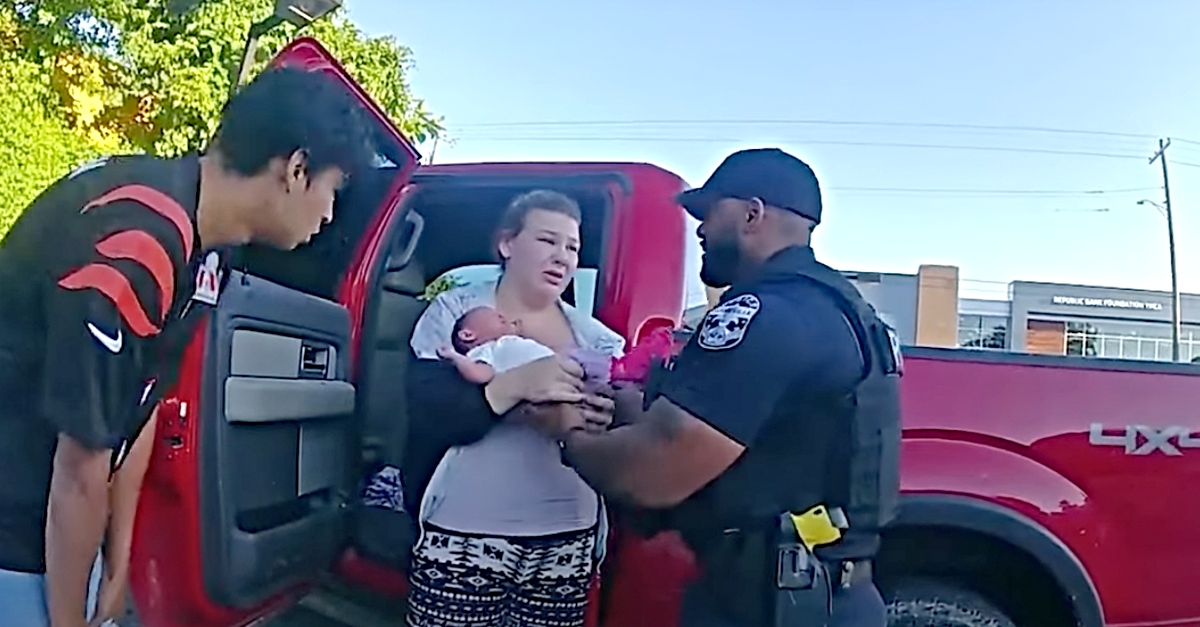 It was just the beginning of their shift, but before the Kentucky cops even had time to react, they spotted a frantic young man running at them. Startled, they prepared for action. But when the man spoke, they quickly realized that the young father was asking for help.

He was speaking in broken English, so they could barely understand him. He gestured for the officers to follow him and took off down the street running. But when the cops saw what the man’s problem was, it changed their lives forever.

Officers Noah Cole and Nick Greene served the Louisville Metro Police Department in Kentucky. Although their patrols were usually uneventful and they rarely had to face a life-threatening situation, this shift would prove to be very different.

They hadn’t even had time to settle into their shift when the frantic young father ran toward them. When they followed him and saw what was wrong with their own eyes, all the experience and knowledge they had accumulated in the force was put to the test.

The two officers, Cole and Greene, were partners and good friends. They patrolled the streets together, relied on each other, and always had the other’s back. They had known each other for years and had formed a bond that only policemen working together could.

They had experienced some of the worst situations you could imagine – and they had gotten through them together. But, when this tragic situation unfolded, could they do the right thing this time?

Officer Cole and officer Greene would begin each patrol shift by visiting all the local businesses in the area and checking in with each business owner. The officers happened to be in Shorty’s convenience store when the man came running in, yelling that something was wrong.

Because the man was speaking Spanish and only knew a few words of English, the officers struggled to understand what he was saying. But, what they did manage to gather from the frantic man came from the expression of  utter terror on his face.

All they knew was that the man’s facial expression told them that it was serious. The man kept yelling in Spanish and gesturing for the cops to follow him to his car. But officer Greene couldn’t help but feel suspicious. What if it was a trap?

They Couldn’t Understand Him

Of course, the officers wanted to help. It was their sworn duty to protect the neighborhood. But helping the man was proving to be difficult because they couldn’t understand what he was saying.

Officer Greene looked around desperately, trying to find someone who understood Spanish to break the language barrier. But the man was growing more and more frantic. Finally, they decided to follow him. Whatever it was, it was clear that they had to act immediately.

Although the cops couldn’t understand what the man was  saying, they did manage to pick up the words “baby,” and “no Bueno.” With these words, they managed to gather that it was a baby in trouble.

Officer Greene was a father himself. When he heard the words, his heart sank. The man was telling them that his baby was ‘no good.’ With a sinking feeling, he and his partner realized that things were about to become serious.

The officers had no choice – they had to follow the panicked man outside to see what was wrong. They followed him out onto the street and saw that he was leading them to a parked car. When they reached the vehicle, they were greeted with a terrible scene.

The officers could see the baby, but the young father was becoming even more agitated as approached and tried to make sense of what they were seeing.

In the back of the car was a woman who was crying hysterically. She held a baby in her arms. When the officers tried to ask her what was wrong, she frantically pushed the infant into officer Greene’s arms.

The baby looked very young – only around a week old. When they saw the baby’s face, they knew they needed to help. But what had happened to the child? They needed to know exactly what was wrong.

The officers couldn’t afford to waste another minute – the scene unfolding in front of them was terrible and the baby’s life depended on their next move. When the two officers took action, it changed the young parents’ lives forever.

It was an extremely unusual situation – and one that no cop on duty ever hopes to face. Not only did the cops change the parents’ lives that day, but they themselves would also be forever changed.

The baby was limp and lifeless in officer Greene’s arms. They had to act now. They assessed the situation as best they could – but they still didn’t know what had happened to the baby and couldn’t get the potentially life-saving information out of the parents.

Nevertheless, seeing the lifeless baby prompted their years of training to kick in and they knew exactly what to do. But time wasn’t on their side… would they be quick enough?

One of the cops tried to key up the radio, but he couldn’t do that, so his partner Cole did all the talking on the radio while he tried to perform CPR on the baby.

He couldn’t talk on the radio, but when he heard the baby come back crying after performing CPR, the cop was like, ‘Oh, we got it, we got it.’ Things were looking well from that point.

When the baby started screaming and whining, the cop realized that there was oxygen getting to the brain, so the difficult part seemed to be over.

Hearing the baby screaming and realizing that she was breathing was amazing for the two officers, as well as the young parents. That was the ultimate sign of relief. Nothing could have gone better.

Thanks to Cole’s quick work, backup soon arrived. EMS checked out the infant, and she was transported to the hospital for further monitoring.

The baby, named Emma, was barely a week old, and the officers didn’t know what caused her to stop breathing. According to what the family told the department, though, she was brought home again and was doing well.

It’s impossible to know if the officers were just in the right place at the right time or if the terrified parents were specifically looking for them, but Greene guessed that they must have seen the police cars parked out front of the convenience store and turned in for help.

Greene and Cole stressed that this life-saving interaction was just another day on the job.