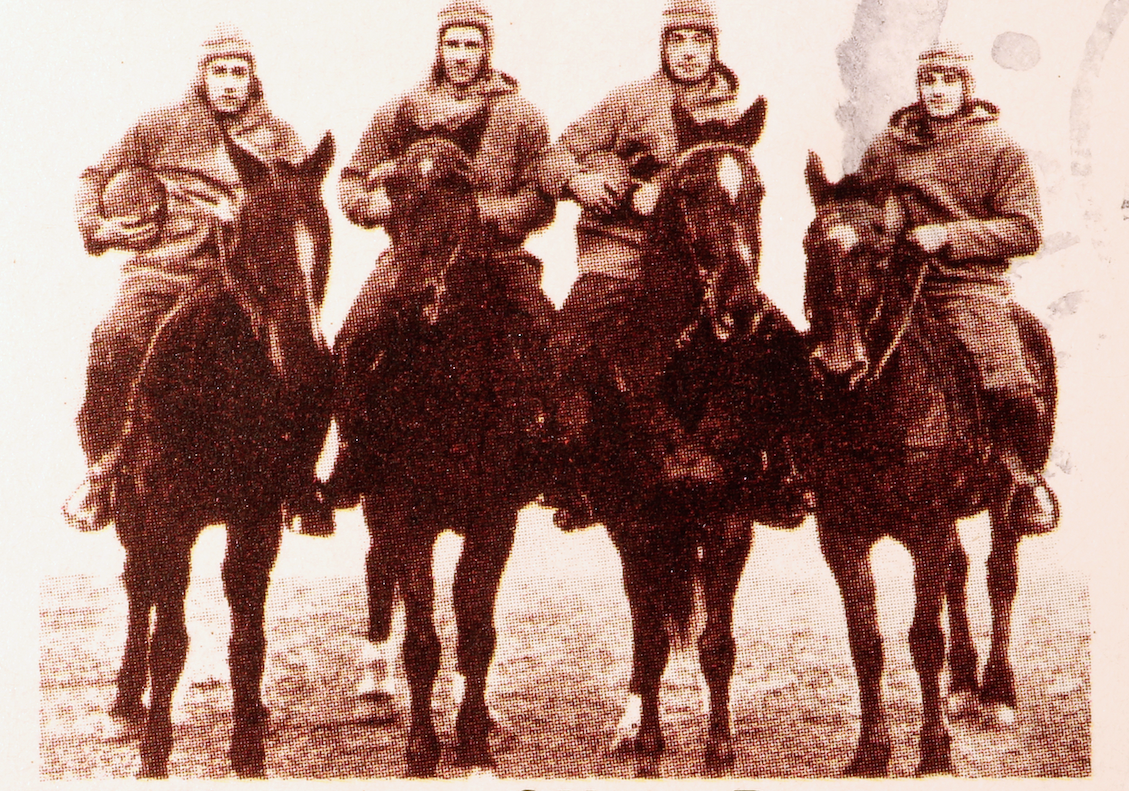 Sports movies are always enjoyable as they can be inspirational, touching and funny. Many of the movies listed here are based on true stories, with some making legends out of the actors and others where actors made legends out of the characters. It’s safe to say that baseball and boxing dominate sports movies with in-numerous titles. There are certainly some great ones not on this list that Top 5 recommends such as The Natural, Eight Men Out, Raging Bull, Pride of the Yankees, Bull Durham, Ali, Million Dollar Baby and Major League. And there have been some really, really horrible ones such as Space Jam, Pumping Iron and anything after the first Rocky movie. But Top 5 wants to be a little diverse and look into other sports movies that have had a big impact on American society and are just really, good, funny and entertaining flicks.

The ultimate rags-to-riches story about a dumb, but loveable loser of a boxer, who liked to punch raw meat during his training, who finds that getting the hell beat of you in the boxing ring is a much better job than getting the hell beat out of you by the loan shark you work for. This movie gave us “Yo Adrian” and “Gonna Fly Now,” and Stallone’s instant stardom and unfortunately five sequels. But none of them even comes close to the original which won the Oscar for Best Picture, Best Director, Best Editing and a few more awards that no one cares about or has ever heard of. Thank goodness Rambo movies prevented Stallone from being typecast. What’s even more astounding about this fictional movie and character is that the fine folks in Philadelphia (where the movie is based) decided to build a statue of Rocky Balboa and place it prominently at the city’s Museum of Art.

Another classic movie based on a true story about a plucky little high school basketball team in rural southern Indiana in 1954 that beats all the odds to win the state championship. It features a coach played by Hackman with a shady past who lost his last coaching job for hitting a player ala Bobby Knight (like Morris Buttermaker in the Bad News Bears, this character would never fly today, because some nutty parent’s group would file a lawsuit), a town drunk played by Hopper, and a bunch of actors players Top 5 has never heard of. Easily the best basketball movie ever made. It will make you feel like you’re actually attending a high school basketball game.

Easily the funniest movie here with an all-star hilarious cast. Parties, illegal gambling, hot blondes jumping off the diving board and her dirt bag of a father, who also happens be a judge. There’s the playboy slacker golfer, who looks like he never worked a day in his life. And an eccentric old rich guy who could give a crap about golf club etiquette who likes the band Journey. And then there’s the psychopath groundskeeper chasing a destructive gopher who steals many scenes throughout, and some high school kid who just wants to earn enough money to get to college while doing it with the dirt bag judge’s daughter. Put them all together and there’s hijacks a-plenty in this classic comedy that’s made golf watchable before Tiger Woods came along.

For the better part of a decade the most famous baseball field was not in New York, Los Angeles or Chicago, but in Dyersville, Iowa. That’s where a fictional struggling corn farmer named Ray Kinsella bucked all conventional wisdom and turned it into a baseball field after listening to the voices in his head telling him that, “if you build it, they will come.” The rest of the movie is sort of a baseball history lesson as some ghosts of the 1919 Chicago White Sox team that became known as the Black Sox after a gambling scandal, come out to play a little ball. A great tear-jerker of a movie. Costner is great as a naive farmer who is willing to risk everything to tear down his corn field and turn it into a real field of dreams for a bunch of outcast players looking for a little solace.

A womanizing, drunken slob of a coach would probably not be able to go anywhere near a bunch of kids today or even coach them, but in 1976 this was somehow acceptable. Matthau is hilarious in this classic as he instructs a bunch of smart-ass kids from the other side of town who couldn’t catch, hit, run or throw to save their lives, but Matthau’s Morris Buttermaker character turned these lovable losers into lovable winners even though (spoiler alert) they lose the championship game at the end of the movie. O’Neal was cute as all hell as the spunky pitcher Amanda Whurlitzer, and the rest of the kids were great as they punked the rich kids from across town.

This was based on a true story with religious overtones of two competing British runners in the 1924 Olympics — one Jewish and one Christian. Makes you think the theme song should be “Why can’t we be friends,” by WAR, but who listens to any of Top 5’s suggestions?

A chick movie for men where men should not be afraid to cry while watching. It’s based on the true story of Chicago Bears legend Gale Sayers and his cancer-stricken teammate, Brian Piccolo in the late 1960s. This is the only made-for-TV movie on the list that was so big that it was eventually released on the big screen. Guys! You can score big points with your woman by watching this and crying like a baby. It’s the ultimate “I love you man” movie.

This is a great inspirational movie about a little kid who could. Daniel “Rudy” Ruettiger wouldn’t take “no” for an answer and went on to make Notre Dame’s football team. A must-see movie for parents that want to see their small kids compete against and get the crap beat out of them by players twice their size. This movie has a great cast, but we still get a little creeped out whenever we see the name Ned Beatty, because all we can think of is that scene in Deliverance.