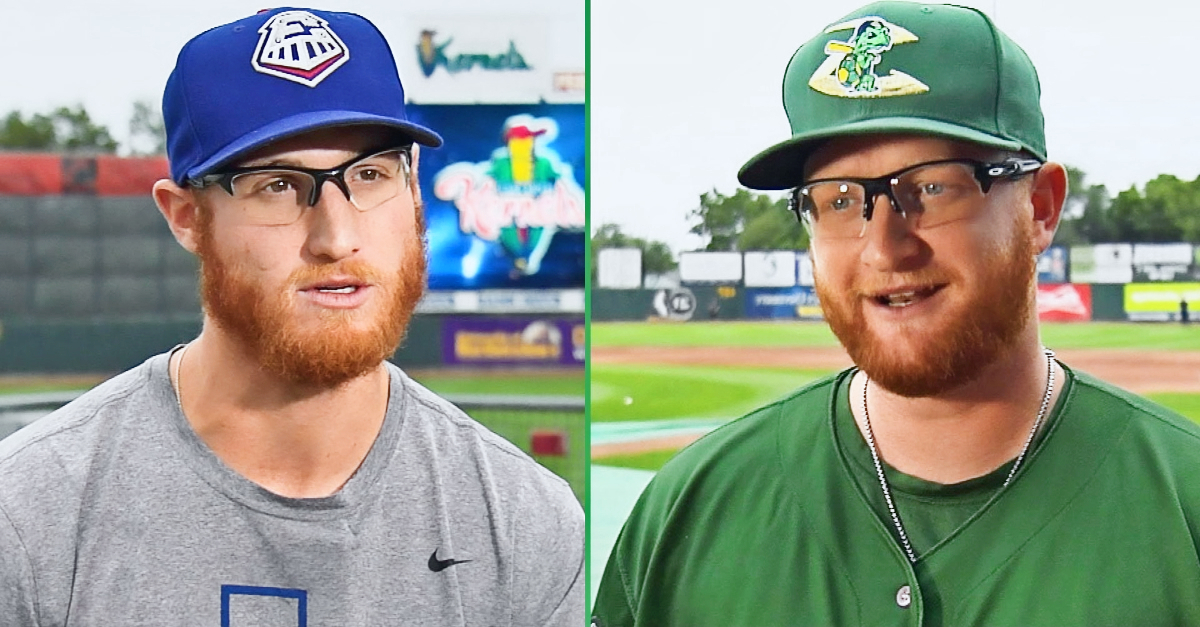 Brady Feigl and Brady Feigl looked nervously at each other while they waited for the results of the DNA test to come in. The two men were identical – looking at each other was like looking in a mirror. How was it possible that they had the same name and looked like twins, but they hadn’t grown up with one another?

When the results came in, both men’s stomachs were in knots. Just what had their parents been lying about for all these years?

Brady Feigl (who we’ll refer to as Brady 1 to minimize any confusion) was from Dallas, Texas. For as long as he could remember, he’d always loved baseball.

He was tall with an athletic build and was also a straight-A student. His mother loved to boast about him to anyone who would listen. Brady had always loved and trusted his parents… until he met the other Brady.

Brady Fiegl (Brady 2) was the class clown and a fun-loving guy. He grew up in Houston, Texas. Like Brady 1, he had a passion for baseball from an early age. His doting parents had adopted him when he was just a baby, and they gave him everything he asked for and more.

Brady had always wondered about his life before he was adopted. Who were his birth parents? Did he have brothers and sisters? But when he laid eyes on Brady 1, he just knew they had to be connected.

Both Bradys continued to play baseball into their teenage years and beyond. They both got accepted to the University of Texas in Arlington – Brady 1 majored in political science, and Brady 2 majored in accountancy.

Even though they were both studying hard and getting good grades, they still made time for their real passion: baseball. Both Bradys went on to play for the Texas Rangers in Arlington, and that’s when they met.

At first, their coach thought it was hilarious that he had two players who he couldn’t tell apart, but it wasn’t long before coaching the two identical redheads became a problem.

Every time he called for one Brady, both would reply. Now, the joke wasn’t just confusing, it was getting extremely annoying. What coach Johnson said next would change both of the Bradys’ lives.

Coach Johnson, becoming increasingly frustrated with the unusual situation, said: “you guys really have to figure out if you’re related or not because you’re both equally annoying!”

The two Bradys looked at one another and had an unsettling thought: maybe there was more to them just looking alike and having the same name. It couldn’t just be a coincidence…could it?

The Bradys’ baseball team loved to joke about the redheaded “twins.” They began to call them Fred and George – after Ron Weasley’s twin redheaded brothers in Harry Potter – to try and differentiate them.

Because Brady 2 was the class clown of the pair, the Bradys played up the joke, which everyone found hilarious. That was until the joke became too serious for comfort.

Too Close For Comfort

The Fred and George jokes continued among their teammates, but the Bradys grew more and more uncomfortable. T

hey began to give serious consideration to the idea that they may actually be related. When one teammate joked that the pair shared the same mom, the joke began to go too far. They had to find out the truth.

The two Bradys sat down together after their teammate’s cutting jokes and discussed the possibility that they might actually be brothers or even twins. They were, after all, the same height, they both wore glasses and even had a similar sense of humor.

Their only difference was their eye color, Brady 2’s eyes were blue and Brady 1’s were hazel, however, Brady 2 was adopted and Brady 1’s mother had blue eyes. When they were offered an opportunity to see if their parents had lied, they jumped at the opportunity.

In 2018, Inside Edition caught wind of the doppelgangers and arranged an interview with them.

During the interview, the Bradys revealed yet another mind-blowing commonality: they both had the same surgical procedure on their elbows, and it was even performed by the same doctor! In fact, that was when the Bradys found out about each other.

The surgeon who performed the surgery on both Bradys, Dr. Dave Andrews, was confused by the doppelgangers. He called Brady 2, thinking he was Brady 1. “The way we found about it actually (was through) Dr. Andrews’ office,’ explained Brady 2.

“He’s the guy who (performed) both of our surgeries.” So, Brady 2 already knew that there was someone out there who had the same name as him before the pair met.

“I was probably six or seven months out of surgery and their office called our trainer and said, ‘Hey, when’s Brady reporting for surgery? Is he getting down here tomorrow?’ He was like, ‘He had it six months ago. What are you talking about?'” Brady 2 explained.

And when Inside Edition aired the story of the two Bradys, people lost their minds.

Now, everyone knew about the two Bradys and all their similarities. “The week that it hit TV, my phone blew up,” Brady 2 said. The constant notifications he was getting started to become so intrusive that had to put it on airplane mode for eight hours at a time.

Still, the buzz on social media grew and grew. Everyone insisted that “they had to be related” or were even “long-lost twins who were separated at birth.”

The two matching players had become fan favorites with the Texas Rangers fans. Their fans were so obsessed with the possibility that the two were related that they set up a Kickstarter to pay for a DNA test.

The Kickstarter reached its target and the players were approached about doing the test. The two men agreed to it and knew that this was the defining moment of their relationship.

The Moment Everyone Had Been Waiting For

The two Bradys had created such a stir that Inside Edition returned to interview them for the second time in a follow-up segment.

The cameras rolled as they captured the moment the Bardys placed their saliva samples in the test tubes and put them back into the plastic seal they had arrived in. It was a tense moment.

One of the Bradys had been to Ellis Island and had looked their shared name up. It turned out that some Fiegels had come to America from Germany, so it was very likely that they had descended from that German family.

But that revelation didn’t lead them any closer to the truth. The two Bradys were more curious now than ever before.

Brady and Brady gave saliva samples and their tests were sent away for analysis. They knew that the results would be life-changing. They had been dogged with rumors of being twins separated at birth for years.

They were visibly nervous as they read the first results. They couldn’t believe it. The results showed them that they did have many similarities.

When they looked through their ancestry DNA, one of the Bradys revealed the top result of his ancestry, and the other Brady was shocked.

The two Feigl’s could see that they both had the exact same amount of Germanic ancestry at 53% each. That was most likely where their matching surname came from. So, were they twins?

However, the similarities stopped at the Bradys’ shared German ancestry. Brady 2 had 2% Irish/Scottish ancestry, while Brady 1 had 10%. So, they finally knew that they definitely were not twins.

The two players were taken aback by the results but were glad their parents hadn’t lied to them. However, they were still connected in one very important way.

The two men have become very close friends throughout the years and still have the nicknames Fred and George, which their coach now uses to differentiate them. Their experience of having a DNA test together has bonded them forever.

Despite not actually being blood-related, the redheaded baseball stars still consider themselves to be brothers.