The Grammys are a crazy, exciting night for our favorite musicians in the biz. While we tune in from home, our favorite artists, their dates and entertainment industry leaders gather to celebrate the year’s stand-out accomplishments in music. Once winners are announced, awards are given and memorable performances ensue, a long night of A-list after-parties mark the occasion complete, and we get to gawk at another year of iconic Grammys fashion.

As with any major tinseltown to-do, celebrities make their grand entrances clad in head-to-toe couture, strutting down the rolled-out red carpet. Photos are taken, spectators gawk and commentators ask the question we’re all silently thinking: “Who are you wearing this evening?” As fashion fans can attest, the red carpet serves as a makeshift runway for celebrities donning designer couture.

A little under dressed for the occasion, #SteveMartin presents the award for Best Pop Vocal Performance to #BarryManilow for "Copacabana (At The Copa)" at the 21st #GRAMMYs. That night, Martin went home with his own GRAMMY for Best Comedy Album for 'A Wild And Crazy Guy…' and his pants in dry-cleaner wrapping.

The fact is, the evening doesn’t just serve as a form of entertainment; it also celebrates culture and the arts in their many musical and visual forms. The revolving door between music and film is certainly no coincidence! What we’re trying to say is that the upcoming 60th Grammy Awards in 2018 should be a night to remember. Come January 28th, you can tune in to catch this year’s winners — but you won’t want to miss the night’s sartorial treasures, either.

To help prepare you for a night full of fashion, here are the Top 5 most iconic Grammys looks of all time. Along with our Top 5 original fashion muses (think: Selena, Whitney, Madonna, Cher & Michael) are the young Hollywood contemporaries who carry on the torch. Enjoy!

Nineteen years ago today, #Selena left us too soon. At the 36th #GRAMMYs in 1994, Selena won the GRAMMY for Best Mexican-American Album ('Selena Live!'). Her legacy and music still live on today. [Photo: Vinnie Zuffante/Getty Images]

Back in 1994, Selena won the Grammy Award for Best Mexican-American Album for Selena Live! She was the first Tejano musical artist to do so, marking a history-making moment in the entertainment industry. Selena’s win also highlights the transcendent impact of music on two neighboring cultures — Mexican and American pop music — all thanks to the breakout star.

She accepted the award wearing a white, beaded gown with a halter-neck reminiscent of her preferred jumpsuits (which she made famous during numerous performances). NY Daily News reports that the dress is preserved in the Selena Museum in Corpus Christi, Texas — as one might expect of an “iconic” fashion item. Dazzling as it may be, we’re also sentimental about what the late star’s legacy represents.

What made @SelenaGomez want to collaborate with Gucci Mane (@laflare1017) on her current single "Fetish?" Click the link in our bio ⬆️⬆️⬆️ to hear about her remix with Galantis (@wearegalantis) and details about her new album.

The trailblazing spirit continues on in the form of yet another musical Selena: Selena Gomez. The Texas-born starlet boasts a successful singing and acting career, is the most-followed person on Instagram and possesses a raspy voice that belies her ever-youthful appearance. Another way she channels her predecessor? She has impeccable fashion sense, and we can’t wait to see what she wears to this year’s Grammys.

P.S. Although she hasn’t won one yet, this could totally be her year. (We’re just sayin’!)

Whitney Houston’s album 'The Bodyguard' launched her career to superstardom and won Album Of The Year at the 36th #GRAMMYs in 1994. Comment below ⬇️⬇️⬇️ with your favorite track from the GRAMMY-winning album or click the link 📲 in our bio for the inside scoop on the best-selling soundtrack of all time.

Back in 1994, Whitney Houston’s long-sleeved, monochromatic formal white gown made waves. After winning Album of the Year for The Bodyguard, and creating one of the most epic love songs of all time — “I Will Always Love You” — Whitney set records we never expected to be broken (until Taylor Swift came along). She did it all wearing a classy ensemble that the fashion world still hasn’t stopped talking about.

The significance of the dress — in all its monochromatic glory — remains to this day. Formerly a model, Glamour points out that Houston could truly pull off the look. Often donning couture in shades like black, white and red, the legendary vocalist often opted for conservative cuts and modest hemlines in some of her classiest looks. (To give you a sense of the star-power still at play behind modern-day minimalist fashion sense, Angelina Jolie is another well-known Hollywood beauty who more often than not opts for solids with her wardrobe choices.)

@BritneySpears arrives at the 42nd #GRAMMYs in 2000. She was nominated for Best New Artist and Best Female Pop Vocal Performance (“…Baby One More Time”). Britney also performed a medley of “From The Bottom Of My Broken Heart” and “…Baby One More Time” that night. [Photo: SGranitz/WireImage]

Six years after Whitney’s win, the all-white formal evening lewk again sent tongues wagging in 2000. This time, it was worn by our generation’s pop Princess, Britney Spears. With her career on the rise, Britney glammed-out in this decadent getup for the Grammys red carpet. All the while, she was channeling the winning vibes of the legend that came before her.

@madonna opens the show at the 41st #GRAMMYs in 1999 with a performance of "Nothing Really Matters." That night, she went on to win four awards including Best Dance Recording, Best Pop Album, Best Short Form Music Video, and Best Recording Package for 'Ray Of Light'.

If you’re down with millennial lingo, note that Madonna could be the OG HBIC. She’s rocked a killer DGAF attitude throughout her career which, more often than not, translates into her signature style. At the 41st Grammys in 1999, she wore this power-red, draped kimono that brought new meaning to “statement sleeves.” Political correctness aside, the public debate that ensued was basically the point all along.

No matter what you think of Madge, she’s remained a prominent public figure throughout a long and prosperous career. Some of her most experimental looks and transformations are merely the byproduct of being an artist who is positively brimming with creativity. From her fiery, boundary-pushing antics — not unlike the eccentric antics embraced by Lady Gaga since — to her affinity for creating hits the public adores, Madonna excels at taking fashion to its very cutting-edge.

These days, another boundary-pushing fashionista has been quietly following in her wake. While Solange Knowles’ vibes are perhaps less fiery and confrontational than those of Madonna (except when she reportedly attacked Jay-Z!), she has been steadily rising the ranks as one of the fashion world’s muses all along.

True, she’s Queen Bey’s younger sister. And yes, her music career is popping off RN. But all it takes is a look at her past #LOTD’s to see that she’s a fashion game-changer. When it comes to innovative ways of combining art and fashion, Solange is without a doubt a rising star to watch. From her ethereal gown to her natural hair, trust and believe that our girl Solange will reign the Grammy’s red carpet with convention-pushing styles that Madonna would approve of.

Cher is yet another legendary singer and performer whose 1974 iconic Grammys fashion was simply unprecedented. Putting her slender physique on display, the two-piece formal style proved she had the flattest abs in all the land. Nominated four times, the one-time Grammy winner is still lauded for being one of the world’s top-selling artists of all time. Not to mention, her influence in the worlds of fashion and beauty is remembered fondly to this day.

Whether it’s her down-to-there locks — inspo for KKW’s pre-blonde take on the trend — her killer lashes, or the fashion-fabulousness she’s been exhibiting ever since the ’70’s, the above outfit appears on almost every list of “Top Grammys Looks.” And what can you really say? She absolutely slays.

The public’s response to Cher’s skin-baring fashion statement came back to mind in 2000 when J. Lo’s Versace creation took “underdressed” to a whole new level. Putting her dancer’s assets on full display, it created a sensation among viewers who felt scandalized by the overtly sex-ay style. Almost 20 years later, not only could she still pull this off, but the Grammys red carpet is still known for being an encouraging environment to put your artistic leanings on display. Here’s to babes keeping fashion risqué on the red carpet.

Only a handful of artists can claim they’ve won 6️⃣ or more #GRAMMYs in one night. Check out our #InstagramStories ⬆️⬆️⬆️ to see which artists have scored big on Music’s Biggest Night 🎤

To be fair, it’s kind of hard to top the “King of Pop,” by definition. Not only was Michael Jackson one of the only artists to ever win six or more Grammy awards in one night, but he was also the first fashion icon to bring bedazzled military garb into our awareness. It’s the kind of sartorial occurrence that makes an impact — you witness it once, and there’s no going back.

When you’re one of the world’s most visible public figures, the red carpet is synonymous with millions of eyes trained on you. As every celeb knows, you can’t please everyone with your fashion choices — so you might as well wear what feels true to you. Even still, it takes major cojones to rock a Sgt. Pepper’s-era getup in glittering, sequined style. Even if you prefer Whitney Houston’s minimalist silo above, the courage behind this maximalist garment earns MJ this shout-out, and the most iconic Grammys fashion look there is.

This breathtaking performance by @beyonce is just the beginning of the epic #GRAMMYs performances happening tonight. Keep watching on @cbstv!

Sparkling styles remain popular Grammys garb among musicians to this day. At the 59th Grammy Awards, Beyonce carried on Michael Jackson’s glittering legacy when she performed in the next-level golden ensemble pictured above. Featuring beaded illusion lace, layers upon layers of golden chokers and the type of golden tiara we’ve only seen in history books, Beyonce took the OTT-Grammy look and truly made it her own. Plus, pregnant with two unborn babies at the time, this look will go down in history as not only truly iconic Grammys fashion, but also the most stylish maternity wear of all time. 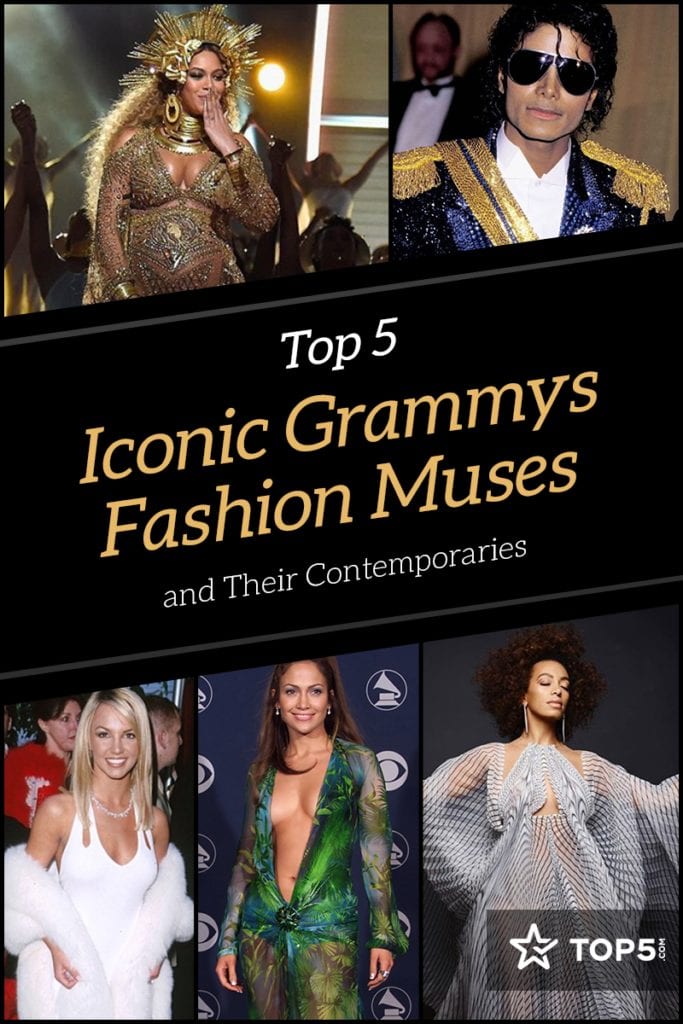 What do you think are the most icon Grammys fashion looks of all time? Let us know in the comments below?