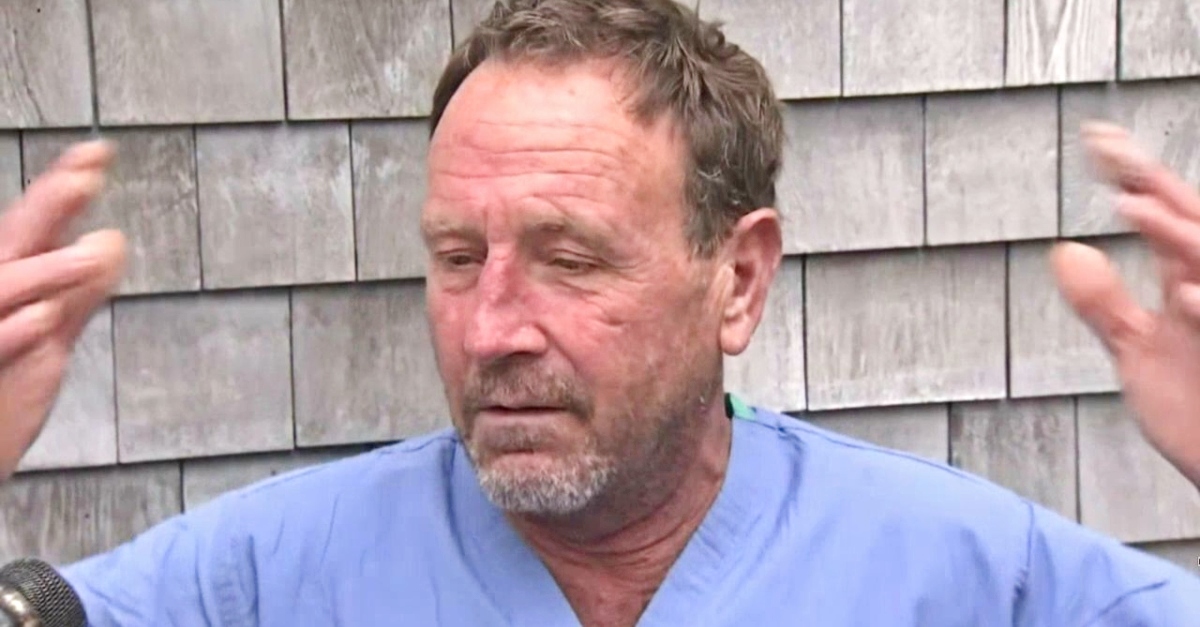 Michael was on his way down to the seabed when it happened. He’d already completed a successful dive that same morning. It was a routine day on the job and conditions were perfect.

It happened in an instant. Even though it was already gloomy under the surface, the little light that did peak through was suddenly blotted out. All Michael remembered was feeling a strong bump before everything went dark and silent.

Michael Packard wasn’t an ordinary diver. Not only was he an expert, but used his skill in a unique way. He had worked in the Cape Cod area for a long time. He knew these waters well and spent most of his dives around Herring Cove working from his boat, the “Ja n’ J”.

Michael was a lobster diver. The profession sometimes felt like a calling more than a job ad he loved every day of it. However, as many of his colleagues had found out the hard way, this form of diving came with inherent risks.

The art of lobster diving was growing more popular around the world. Thousands of people now did it on a yearly basis. Cape Cod was one of the prime locations for this activity in the world. Unlike Michael, most enthusiasts did it as a hobby.

Michael had turned his passion into a thriving means of making a living. There were many risks involved. In fact, Michael had once almost been dragged out to sea. In addition to net entanglement, frigid temperatures, and “the bends”, there were also some risks that were simply impossible to guard against.

Micheal respected the ocean and all its inhabitants. This was one of the traits that had helped him become so successful at what he did. With all the regulations in place these days, it was imperative to respect the environment.

The area of Provincetown and the Cape Cod peninsula, in general, was notorious for its dangerous sea creatures.  Most divers there knew that precautions had to be taken and proper planning could mean the difference between success and placing oneself in grave danger.

Cape Cod residents and divers knew all too well that sharks were a huge concern. The area had seen a disproportionate amount of shark attacks in the last two decades in comparison to other well-known diving spots.

White sharks were by far the biggest scourge in that regard. As fearsome a reputation as these creatures had, they weren’t the only sea life divers had to look out for by a long way.

Cape Cod didn’t just have a large shark population, it was virtually infested with these infamous creatures. As far as white sharks went, Cape Cod had one of the largest populations of this breed anywhere in the world. Sharks do, however, get a bad rap because of the way they are often portrayed in pop culture.

In reality, attacks aren’t as common as people believe and most attacks were actually accidental. With the close quarters shared by sharks and divers in Cape Cod, the risk of such attacks was, however, increased dramatically.

While it was white sharks that were commonly thought of as the main threat, there were many other species that posed a danger there too. Most were not as infamous and feared but just as perilous to encounter.

Cape Cod was also renowned for being home to tiger sharks and even the dreaded great white sharks there too. Most outsiders were unaware that there were other “giants” that frequented the area too.

Stingrays were known to be dangerous no matter their size. Cape Cod outdoes itself again with these other infamous creatures. Not only were there dangerous species there, but one, in particular, stands out more than the others.

The Giant Cape Cod Stingray was a type of Ray that was native to the peninsula. These terrifying creatures could grow to epic proportions. Worse yet, they were known to hang out in the shallower, beach areas. All these risks aside, Michael Packard came across a different giant.

Whales were by far the largest animals on earth. With their colossal size alone, they can be both awe-inspiring and devastatingly dangerous if you got too close to one.

Whales were, however, known to be gentle and hardly ever had reputations for being dangerous. This mostly depended on the circumstances and the species of whale involved. With everything, there were exceptions. Michael Packard’s experience was proof of this when a standard dive suddenly became a life-and-death situation after he encountered one.

Remarkably, Michael Packard had survived a perilous situation once before. He seemed to have a penchant for walking away from situations that most people wouldn’t have been to.

The first incident occurred in 2011 when Michael was one of the only survivors of a plane crash. He was injured and after experiencing that event, likely never imagined he’d end up in an even more unlucky and bizarre incident.

In June 2021, Michael, together with his sister and boat crew, headed out for a routine dive. Everything was going normally. Michael had his regular scuba gear and was heading towards the sandy bottom where the best lobsters were usually found.

It was his second dive that morning, and conditions were excellent; the water was warmer than usual. On his way down, Michael passed schools of sand lancers. Suddenly, he felt a strong bump before being enveloped by a giant shadow that made everything go dark.

Before Michael could make sense of what had happened, he felt himself being forcefully ejected and ended up back on the surface. No one could fully comprehend what they had just witnessed.

After being rescued and brought back to the boat, everyone else was as stunned as Michael about what had occurred. Unbelievably, Michael had been swallowed and thankfully spat out by a massive humpback whale.

Whales weren’t known to be aggressive despite their colossal size. When the story broke, experts that weighed in on Michael’s hairy experience agreed that it was likely an accidental event.

Whales are fed by sucking in vast amounts of microscopic plankton or small fish. In this case, the whale was most likely trying to feed on the school of sand lances nearby when Michael was inadvertently caught in the feeding vacuum its mouth created.

Luckily for Michael, the whale in question wasn’t a toothed one, and he was able to escape without serious injury. The oesophageal opening of a whale isn’t large enough to swallow a human.

It’s therefore likely that Michael was trapped inside its mouth for close to a moment before the irritation caused by his squirming torso caused the whale to spit him out again.

Unsurprisingly, Michael’s shocking encounter with the whale led many people to draw comparisons with a bible story. In the famous story, the biblical character Jonah was also said to have been swallowed by a whale.

Aside from “soft tissue damage”, Michael suffered no broken bones or other severe injuries. Whether his luck was divine or not, after his plane crash, this marked the second time that Michael Packard had been involved in an extraordinary accident and lived to tell the tale.