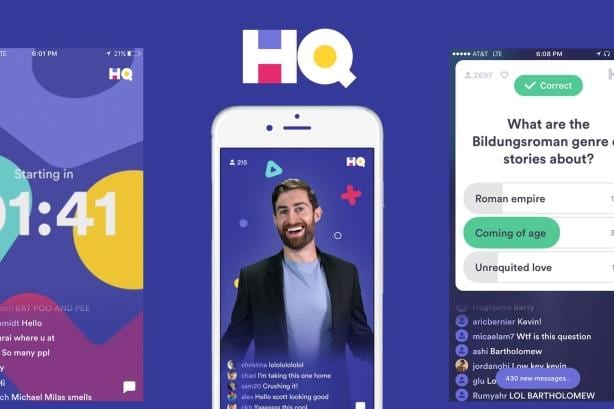 If you’re the longstanding champion of Wednesday night trivia at your local bar, chances are you’ve already played HQ Trivia and have perhaps won a few dollars like Jeopardy! champion Ken Jennings (although, HQ’s winnings were a paltry $11.16 versus his whopping $2.5 Million on Jeopardy!). If not? Download it now. It will change your life (or at least the way you look at trivia).

Launched in August 2017 and targeted to North American and UK audiences, HQ Trivia is akin to Who Wants to Be a Millionaire and Jeopardy! but in real-time, open to all and a favorite among millennials. This live trivia app enables you to play trivia up to twice a day (3 p.m. and 9 p.m. EST on weekdays and 9 p.m. EST on weekends) for real money. Why stick to local bar games and win gift cards and pitchers of beer when you can win real, hard cash?

Initially only available on iOS, the game recently launched its Android version. We have to warn you: It’s quite addictive.

Here’s everything you need to know about HQ Trivia:

Sample Question: Who wrote the poem O Captain! My Captain!?

HQ Trivia is a live game. We recommend enabling push notifications so you’re reminded when to log in and start. Once you receive the push, you typically have around five minutes to log in. If you log in after the deadline, you can watch, but you can’t play.

Upon logging in, the host — typically Scott Rogowsky, affectionally called “Walt Quizney” or “Quiz Daddy” by HQ players — will greet you (whom he calls his “HQties”) live from whatever city he happens to be in (usually New York City) with his overly cheesy dad jokes.

He’ll inform you how many people are playing and how much money is in the pot. If you look in the upper left-hand corner of your screen, you can continue to monitor how many players are involved. As HQ’s popularity has grown, this number often starts just shy of 1 million players and once reached 2 million!

Once the game begins, Rogowsky reads aloud the questions. The game typically involves 12 multiple-choice questions (but has gone up to 15) that draw from celebrity knowledge, historical events, literature and more. The questions start easy and get harder as the game goes on. The hardest questions are deemed “savage.”

You have just 10 seconds to answer each question, i.e., not enough time to Google the answer or phone a friend. If you answer a question wrong, you’re no longer allowed to participate in the game but can continue watching. If you correctly answer all questions, you win a piece of the jackpot, which is split equally among all winners. So if the pot was $2,000 and 100 people win, each person will get $20, redeemable via PayPal shortly after the game ends.

Sample Question: Which city has two of the four longest suspension bridges in the US?

When the game debuted, the jackpots were typically around $100, but as HQ Trivia has received more funding, jackpots have increased drastically. “I’d love to give away a million dollars someday,” co-founder Res Yusupov told Business Insider.

While the pots aren’t quite there (or anywhere close), they have increased, and now jackpots typically start at $2,000 and have gone as high as $20,000 — a record high during the last Super Bowl’s halftime show. Sundays have been trending as the higher-prize nights, as well as the busiest night. The average prize is between $10 to $12, but payouts have been as low as $0.28 and, in one lucky incident, as high as $6,000.

When HQ first came out in August, players had to wait until they had won a minimum of $20 before cashing out, meaning they would have to win multiple rounds of HQ Trivia. Quite a challenge! Thankfully, the rule changed in January 2018, and now you are able to cash out immediately via a PayPal account.

Dan Rather and family celebrating their Christmas Eve HQ win!

Sample Question: Who wrote the most #1 hit singles after Paul McCartney and Lennon?

With only 10 seconds to answer a question, asking Siri or doing a bit of Googling won’t work. While several cheating sites and bots were created and quickly shut down, the best tip is to play with friends and family. In particular, family and friends of all ages and interests.

Categories cover absolutely everything. While your 80-year-old travel-loving grandmother may be able to quickly tell you that the official currency of China is the renminbi (often referred to as the yuan); your 8-year-old nephew may have just studied Peru in geography class and can tell you that the guinea Pig is native to South America; and your 24-year-old reality-TV-loving sister can tell you that Kirby is not the name of one of the Kardashians. Aside from surrounding yourself with an array of smart, well-informed people, we recommend you keep reading and keep paying attention to your surroundings. You never know when something you learned on last night’s episode of This is Us may be the next HQ Trivia question.

This was former CBS News anchor Dan Rather’s strategy when he played and won the jackpot on his very first try. “Dan Rather won HQ playing with his daughter and his grandson, Martin. And that illustrates the key element of HQ,” host Rogowsky told Money. “We ask questions about current hip-hop as well as 1920s presidencies and stock market crashes. There’s definitely a range of topics, and it helps to have people who have lived throughout history to give you experience.”

2.) Why Are People Deleting The App and Tweeting #deleteHQ?

Sample Question: Wallace & Gromit are movie characters in which style of animation?

When HQ Trivia first launched, there were tech glitches, just like any new app. Servers became overloaded, the game froze, and a few times it became so severe that the games had to be postponed. We will say host Scott Rogowski handled it like a champ and filled the empty space with more dad jokes while the engineers tried to address the issues on the back end. For the first six months of its conception, people expressed their frustrations of HQ in message boards and across social media but weren’t leading a boycott of the company. That changed on Feb. 2, 2018, when Recode reported that HQ Trivia had raised $15 million in funding from Peter Thiel’s Founders Fund for a total valuation of $100 million.

Thiel, one of the founders of PayPal, was one of President Donald Trump’s backers and also secretly backed Hulk Hogan’s lawsuit against Gawker Media, which ended up bankrupting the company. While Thiel’s partner Cyan Banister led this round of funding, critics are still boycotting HQ due to Thiel’s unpopularity and encouraging others to delete the app from their phones with the #deleteHQ hashtag across their social media handles.

Sample Question: In a 1961 speech, JFK announced his moon ambitions, but also acknowledged which other strategy?

B. Dismantling the CIA

Extra Lives: You can get extra lives! Refer friends via your personal referral code and when they register, you’ll get a second chance in your next game should you incorrectly answer a question.

Make Friends: HQ has a chat function so you can talk to fellow players. We find it more annoying than fun, though, as it’s one stream of chat for all 600,000+ players and people often make weird, nonsensical comments or troll the house. On the plus side, chat is where Rogowsky gained his nickname “Quiz Daddy.”

It’s Both Free and Ad-Free: Anyone who plays free online games knows how annoying the ads are. As of now, HQ is completely free of ads, so the only annoying thing you need to sit through is Rogowsky’s voice. Rumor is there are plans to monetize the game in the future, so enjoy it while it lasts.

Stick Around: If you answer a question incorrectly, you will be kicked out of the game but are allowed to stay in the app and watch the rest of the game as it unfolds.

Who’s Behind the Genius: You can thank Rus Yusupov and Colin Kroll — the brains that brought you the video-sharing app Vine — for HQ Trivia. Both are former Twitter employees and they left on less-than-good terms in 2014 and 2015.

Let’s see if you correctly answered all of our trivia questions!

Question 1: Who wrote the poem O Captain! My Captain!?

Question 2: Which city has two of the four longest suspension bridges in the US?

Question 3: Who wrote the most #1 hit singles after Paul McCartney and Lennon?

Question 4: Wallace & Gromit are movie characters in which style of animation?

Question 5: In a 1961 speech, JFK announced his moon ambitions, but also acknowledged which other strategy?

B. Dismantling the CIA

Have you played HQ Trivia? Better yet, have you won a piece of the jackpot? Tell us in the comments below!