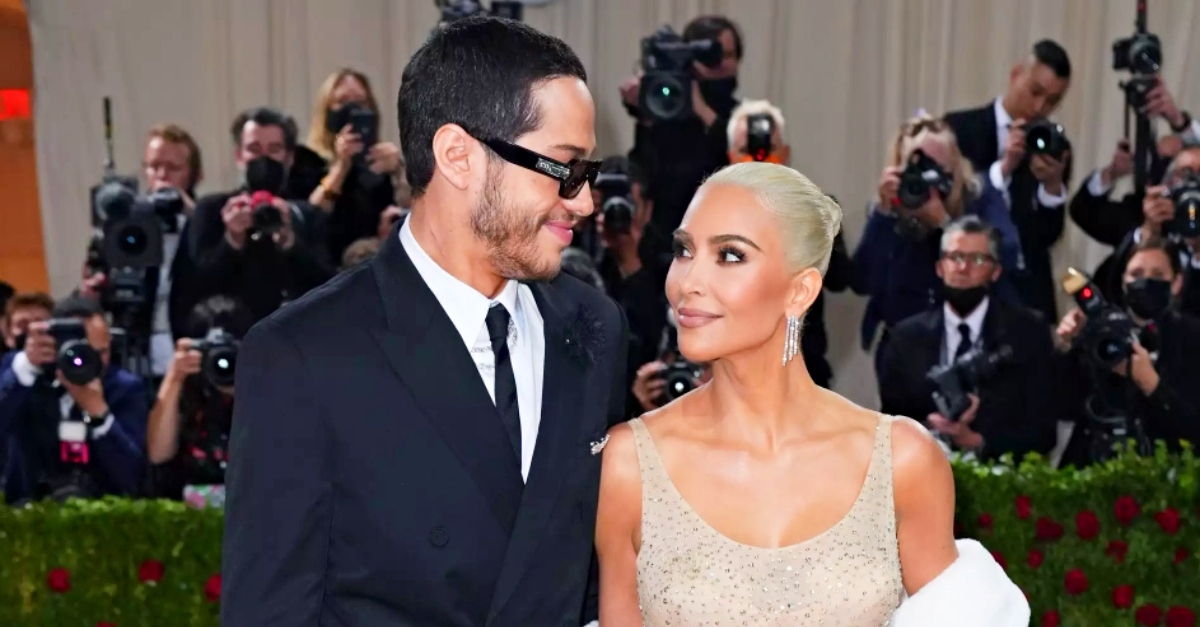 The Kardashian family has been household names for a long time now. After all that time, fans still can’t get enough of this enigmatic troop and remain enthralled by their every move.

While all members of the family are usually embroiled in some kind of intrigue, it’s arguably Kim Kardashian that usually garners the most attention. From new career moves to ups and downs in love, Kim always finds a way to spark new interest in her life. After her highly publicized divorce, it was her new relationship that attracted the spotlight this time.

For Kim Kardashian, er relationships and marriages have often sparked the most interest. After all, she has been married three times, most notably to Kris Humphries and divisive rapper Kanye West.

Kim has proven her chops in the business world and is now even pursuing a legal career like her father Robert Kardashian. However, people often disregard these achievements in favor of her relationship drama. In late 2021, her new relationship was just too juicy to ignore.

After being married to sports stars and a rapper, fans of Kim K could be forgiven for thinking she had a type. It seemed to be a mix of athletic and a little dangerous even.

After her divorce from Kanye West, fans were surprised when she later announced that she was dating Saturday Night Live cast member, Pete Davidson. Davidson is better known for the goofy characters he plays on SNL and, well let’s face it, doesn’t quite have the same bad-boy vibe as some of Kim’s previous choices.

Ever since the announcement, fans have been reveling in the relationship. If most thought it would be tamer, they were wrong. Early on, the couple made headlines when Davidson and Kanye West were involved in a texting war that got pretty aggressive.

The couple is certainly an odd match in some ways. However, Davidson has also attracted a lot of attention with some of his previous relationships too.

Pete Davidson, goofy on-screen image aside, actually has quite the dating history. In fact, he’s dated a string of celebrity women including Kate Beckinsale and Ariana Grande. Most people know Pete for the hilarious characters he plays on SNL.

Given that his job was to make people laugh and act the fool, it was sometimes hard to believe that he had a serious side, let alone one capable of attracting such gorgeous women. However, Pete has proven that he can be quite the lady’s man too.

Pete’s hot streak with dating has now seemed to reach a crescendo when he bagged one of the most desired women in the world. The relationship was bound to attract a lot of attention due to the intriguing subplot at play.

In comparison to Kanye West, Pete Davidson seems a lot more docile and timid, the actor and comedian even publically letting on to the fact that he struggles with anxiety. Given this chasm between him and Kim’s ex, many people have another aching question about Pete.

How Does He Do It?

Pete Davidson sometimes gets an unfair rap. He’s seen as an ordinary dude in many ways but the fact that he consistently manages to bag such beautiful, famous, and successful women makes him something of a folk hero among fans.

However, this is probably unfair because people tend to forget that he is a celebrity in his own right too. As a talented comedian and actor, his propensity for making people laugh is endearing. Either way, he is living proof that image isn’t everything.

Ever since the news of Kim and Pete broke, the gossip mills have been working overtime. The level of celebrity that Kim has attained does have a darker side that rumors and false narratives play a massive role in perpetuating.

With so many different news stories and rumors out there at any given time, it can be difficult to know what to believe when it comes to celebrity dating.  However, when Pete’s cast mate, Chloe Fineman, spoke about the couple, she was seen as a trustworthy source since she worked so closely with Pete.

Chloe Fineman is also a well-known member of the current crop of SNL cast members and is just as hilarious as any of them. Fineman’s most famous skits usually involve her side-splitting renditions of Britney Spears.

Since she and Pete worked together on SNL, many people wanted to know if she had any juicy tidbits about the relationship.

In a recent interview, Chloe was asked about Pete and Kim’s relationship. Unsurprisingly, she mentioned that she and other cast members get asked that a lot. The comment did seem slightly barbed and Fineman can be forgiven for this as an up-and-coming celebrity herself.

However, Fineman did go on to say that when she met Kim and person, she found the socialite “cool” and really “loved her”. Chloe also crucially confirm that the electricity between the pair did seem to spark when Kim hosted SNL and she and Pete shared a kissing scene together.

When Kim and Pete performed a skit as Alladin and Jasmine on a magic carpet, the pair had to kiss as a part of it. Kim has publicly mentioned it since that; as a result, there was “a vibe”.

In a revealing interview, Kim went on to thrill fans with more tasty tidbits of information. Many were surprised by her candid and racy admissions.

According to Kim, after her SNL appearance and that kissing scene, she held an afterparty that Pete never attended. She later made some calls to get in touch with him.

The most engaging side of Kim’s story was what she revealed later. Apparently, she was initially just looking for some, let’s just say, more casual fun after hearing some flattering rumors about Pete’s physical attributes.

Considering that Kim is one of the world’s most famous and desired women, it’s not likely that many fans were expecting that admission. Either way, whatever the truth around this intriguing relationship, Pete’s legend just gets better.

People close to the couple have said that Kim is a lot “happier” since being with Pete. There was, however, some sad news amid all the positivity.

At the finale of the 47th season of SNL, Pete and another castmate, Kate McKinnon, announced that they would both be leaving the show. While it’s common for SNL members who make it big to eventually leave, Pete’s absence will be a sore spot for fans of the hit show.

Given that Pete is now inexorably tethered to the publicity machine that is Kim Kardashian, it does seem only natural that he will be moving onto a new chapter in his career.

Everyone’s favorite celebrity couple has shown thus far that drama aplenty is never far away. For fans of Kim and Pete, the fact that they appear to still be going strong only heightens the intrigue. Only time will tell what the future holds for these two.

One thing is for certain; whatever happens, there will be armies of fans waiting to hungrily lap every bit of news. What’s your take on Kim and Pete’s relationship