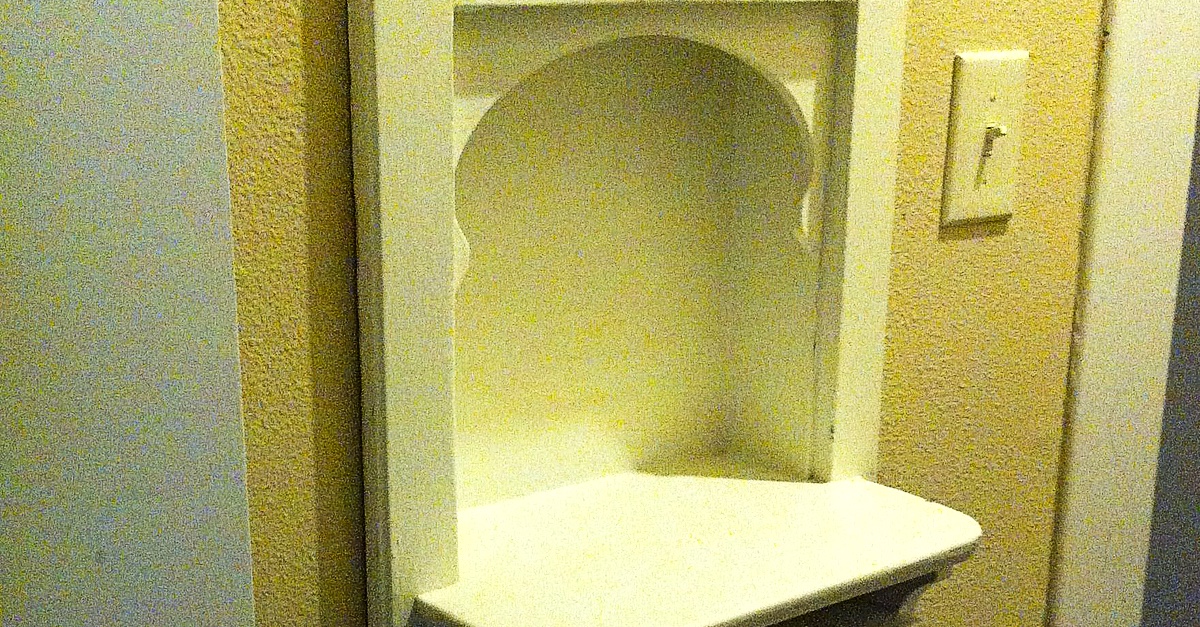 From landline phone stations to tiny trap doors and hidden stairwells, a lot has changed over the years. Especially when it comes to building the most efficient home.

These are some of the most popular house features that have dated terribly over the years thanks to new technologies and relaxed etiquette. Let’s get started.

Nowadays, people just take off their shoes if they are too dirty to be worn inside but back in the day, taking off your shoes was considered very improper and impolite. The solution?

Nail a metal shoe scraper contraption to the outside of your front door. Often, a railing would accompany them so you could balance yourself. Needless to say, it became more hassle than they were worth.

Going to the store to pick up groceries wasn’t as easy as it is now back in the day. Although sticking a beehive between the walls of your home seems like an awful idea, it ensured that homeowners could get honey whenever they wanted in the past.

This practice is known as ‘Wall Keeping’ and dates back to 60 AD.

If you’ve ever seen one of these, it would have been in a very old home. These seemingly random buttons on the floor were used once upon a time to call servants to a room.

Also known as ‘butler buttons’, they became popular in the late 19th century. They were placed on the floor for convenience purposes but now, they remain hidden under rugs or covered in paint.

It might be confusing to see a small cabinet inside the wall of a home with two doors that open on the inside and outside of the wall. This mysterious contraption was known as a milk door.

It saved the homeowner a trip to the store and allowed the milkman to safely deliver their milk and other dairy products such as cheese, butter, and eggs. Today, however, they’re a rare sight.

As more and more homes opt-out of having a landline, phone jacks are becoming increasingly obsolete as a home feature.

A number of homes still have these included in their planning design but if you’re building a home anytime soon, we’d recommend skipping this one. Technology has made these features well and truly outdated.

If you ever come across an old house that has a tiny stone house in the backyard and wondered what it was, we’re here to tell you!

This fancy barn was used as a summer kitchen and came fully equipped with fireplaces and stone ovens. They were used by enslaved individuals to prepare meals big enough to feed everyone on the property.

This freestanding kitchen cabinet and desk was the norm back in the day when kitchens didn’t have built-in countertops and cupboards.

The cabinets called Hoosier cabinets or Hoosier cupboards doubled as a workstation and became popular in the 1890s. Now, you might see one in the garage.

Before modern heating systems, homeowners had to heat their home with coal – which they stored in their basement. This tiny door was created for delivery men to drop coal into the basement with ease.

The homeowners would then shovel the coal into their furnace.

‘Light button’ just doesn’t have the same ring to it as ‘light switch’, does it? Yet, in the 19th century, light buttons were the words on everyone’s lips.

The light switches we all know and love today weren’t invented until 1917. So if your house has this on its wall, you know it’s old. But even though they may look cool, they no longer serve any purpose.

Almost all homes have a medicine cabinet in the bathroom behind the mirror. It’s a feature that has remained firmly in style. However, have you ever noticed that some medicine cabinets have a little slit in the wall?

This was a built-in razor blade hold when shaving took a lot more skill.

Laundry chutes still exist in some hospitality establishments today, but if you see a tiny door in the wall of your house, you can rest assured that your house is a real G.

Believed to have been invented in the 1890s, these small chutes were installed in 2-or-more story houses to save the hassle of physically bringing the laundry basket down to the room. Instead, you just tossed it in the chute – we’re not too sure why this one got canceled.

Before refrigerators were invented, these standing cabinets acted as coolers. Known as an Icebox or a cold closet, this 20th-century device was used to store ice.

Ice used to be delivered to houses and placed in these cabinets outside so as they didn’t need to go inside. They were rendered completely useless when the freezer appeared.

To this day, there are still stories of people finding hidden stairwells and rooms in old mansions. These hidden features belonged to the 17th and 18th centuries and usually led to a small basement or attic.

They were created to discreetly house servants that lived in the same home as their masters. Needless to say, this one is long gone.

Ever wonder why some houses have small windows above their doors? This was made popular back in the day when electricity wasn’t as easy to come across.

These small windows acted as a much-needed source of light to brighten the dull-lit hallways. These transom windows are still popular today and are one of the only features that haven’t lost their function over the years.