Array ( )
Top5 » Trending » Entertainment » Your Favorite Harry Potter Stars: Where Are They Now?

Your Favorite Harry Potter Stars: Where Are They Now? 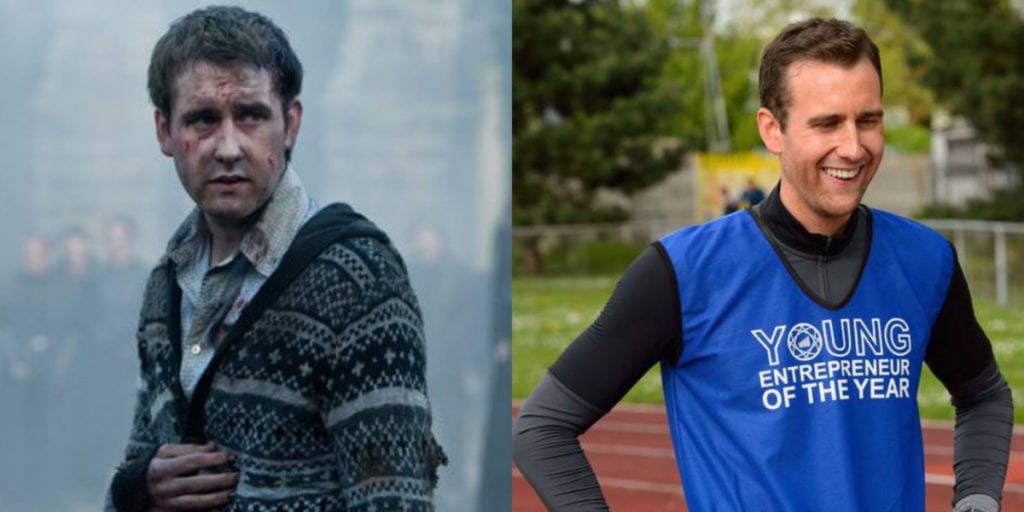 It’s been seven years since the multi-billion-dollar Harry Potter film series ended, but that doesn’t mean Potterheads are done with the Wizarding World just yet. Us mere muggles want more. That’s why HP fans are still lining up and hurrying to buy tickets to see Harry Potter and the Cursed Child. It’s why we’re still lurking around Pottermore hoping for J.K. Rowling to divulge just…a…tad…bit….more about Harry, Ron and Hermione. This constant demand for more, more, more has worked out for die-hard fans. Two years ago, fans finally got to see their Wizarding World expanded: The five-part Fantastic Beasts and Where to Find Them series will quench our thirst for more magic (for now). But, while the franchise is still expanding and casting new soon-to-be household names, Potterheads still get that melancholy ache from time to time, wondering, what has The Boy Who Lived been up to, anyway? Where are the Harry Potter cast now?

Let’s not forget the ones who started it all. The ones who first showed us how spell-binding the ride to Hogwarts could be. Follow along on another journey, this time seeing what all the Harry Potter kids have been up to. 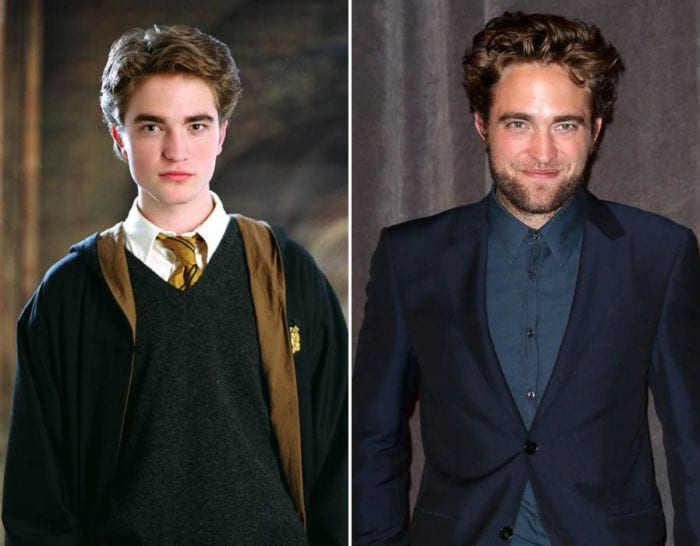 The one-time Cedric Diggory has slightly fallen off the radar in recent years, likely an intentional step back from the limelight.

Pattinson quite obviously followed up his Harry Potter work with the Twilight franchise, before going into indie films. He also gained fame for his performance in Remember Me, Water For Elephants, Cosmopolis and Lost City Of Z. 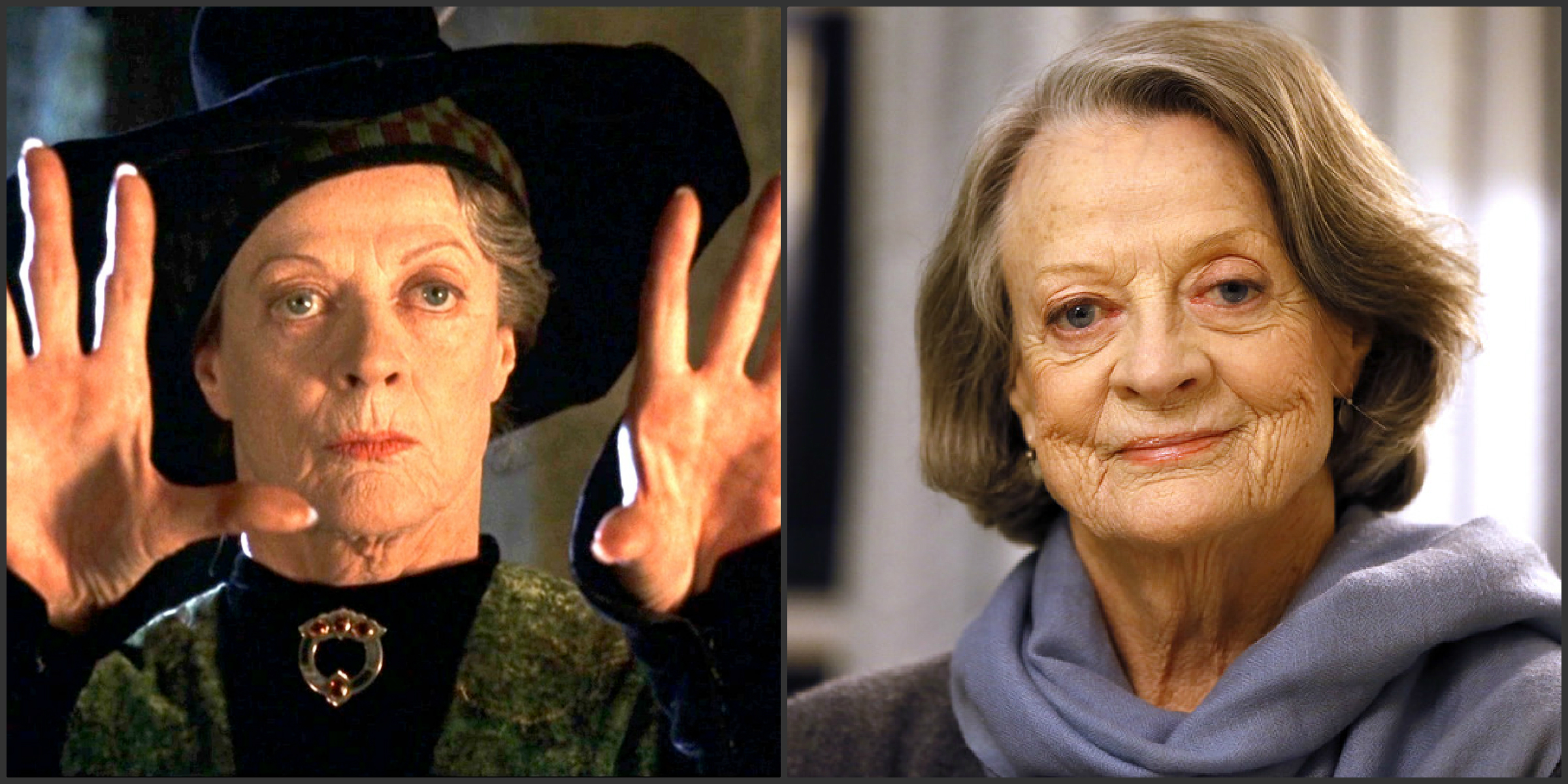 Smith is currently starring as the inimitable Violet Crawley, Dowager Countess of Grantham in the final season of Downton Abbey. She’s been seen in a number of films, including The Best Exotic Marigold Hotel and Becoming Jane.

Harry Potter’s bratty cousin Dudley Dursley is all grown up and looking VERY different to the chubby youngster we all know and love. Or hate, given his character’s rather nasty treatment of poor Harry.

He enrolled himself in the London Academy of Music and Dramatic Art, where he trained for the stage. Since then he has starred in 12 plays. Melling did get back on the big screen, starring as William Barclay in the true-life drama The Lost City of Z. 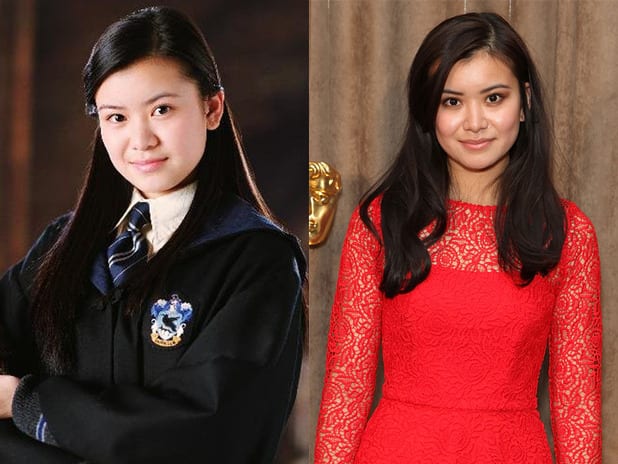 Hogwarts student Cho has the distinction of being the very first girl Harry kisses.

Most recently, Leung is starring opposite Jackie Chan in the action-packed movie The Foreigner, about a man tracking down a group of Irish terrorists. Leung also made a name for herself on the stage. 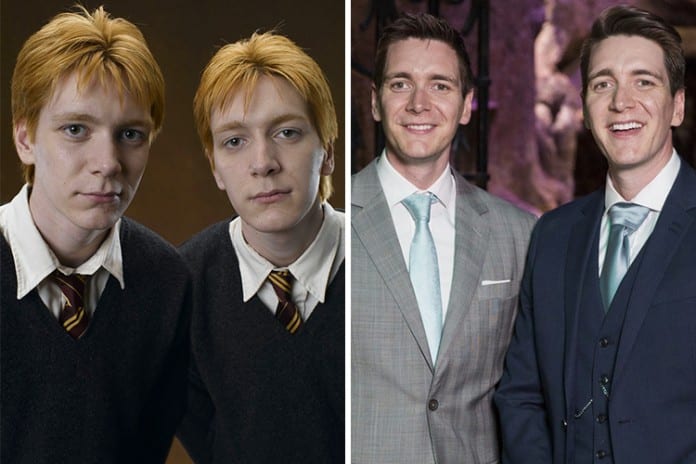 The twin older brothers of Ron made mischief and jokes and eventually opened their own joke shop.

They starred in the indie comedy Own Worst Enemy. However, even though they still live together, the two have found their own personal identities as James continued acting and taking on roles in movies The Turn and Ward 3. Oliver stopped acting. He took to blogging, where he writes about his love of sports, his traveling adventures and his philanthropic endeavors. 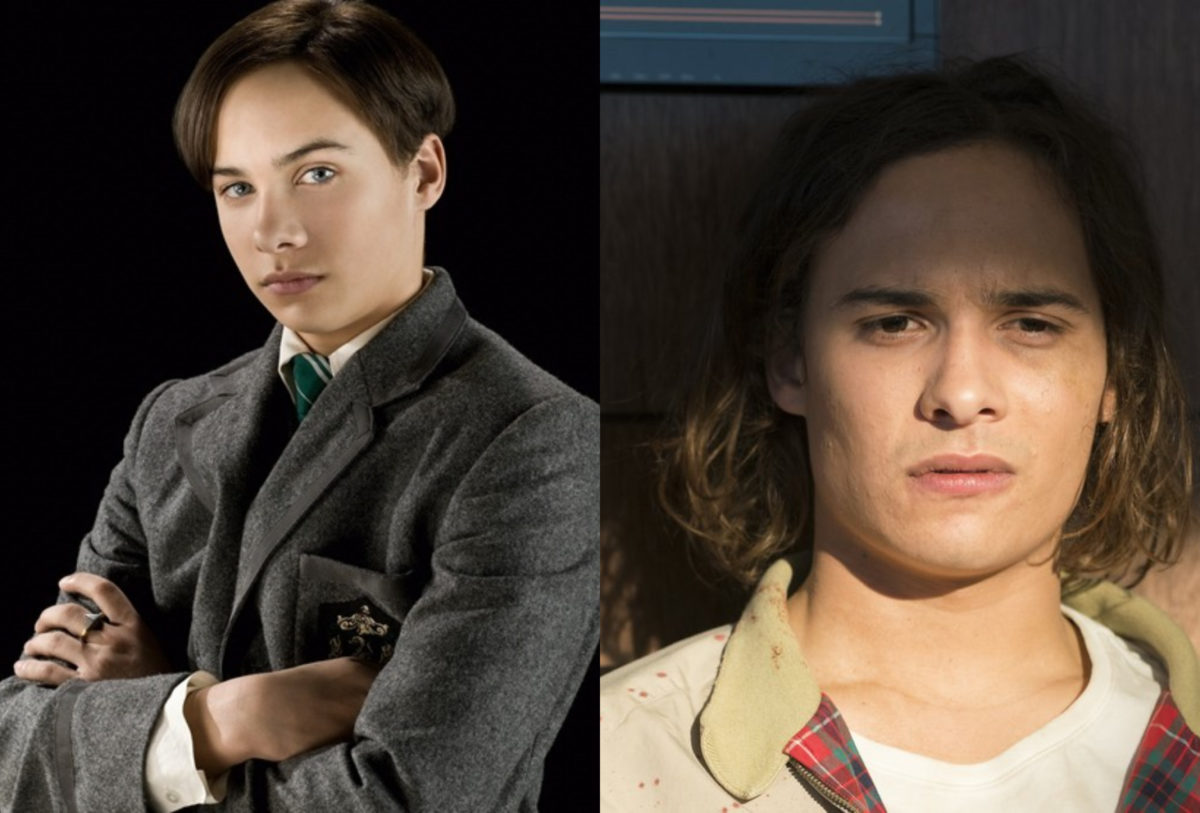 Before there was He-Who-Must-Not-Be-Named there was Tom Marvolo Riddle. The clever prefect who charmed the pants off poor Professor Slughorn. This was perfectly suited for Dillane, who has charmed audiences in so many parts since.

The British actor has starred in a handful of films since HP – once with Game of Thrones actor (and his father) Stephen Dillane, as his on-screen son in comedy-drama Papadopoulos & Sons. He’s also stolen hearts as the unlikely druggie hero in AMC’s Fear the Walking Dead. SPOILER ALERT: Sadly, his character was killed off in the latest season but if you want more Frank (and don’t mind horror) you can look forward to his UK paranormal thriller Astral coming soon.

WELP. Not much has changed for Emma. That’s good news for the English beauty and gold-hearted activist. Since finishing the HP series, the actress has walked a path of fighting for what is right, something Hermione would be proud of, indeed.

When Emma isn’t singing as a brainy Belle or staring in films like 2017’s techno-thriller The Circle, she’s fighting for women’s rights as a UN Women Goodwill Ambassador. #We’reWithHer, amirite? 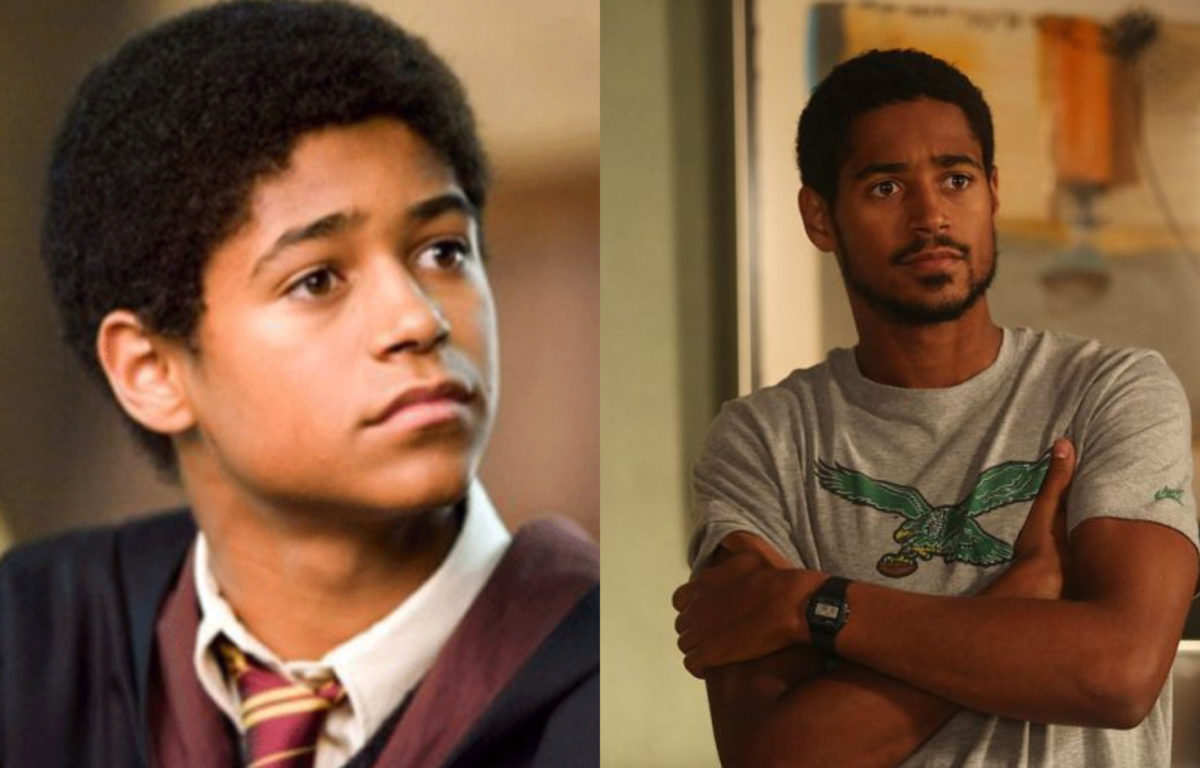 In the wizarding world, he was a half-blood (half wizard and half muggle) and an extraordinary Gryffindor chaser. But what has Alfred moved on to since wrapping his role as Dean Thomas? A LOT.

Enoch has had constant work since the Harry Potter films ended. You can catch him on TV series Troy: Fall of a City and How to Get Away with Murder. The latter has won him three nominations for Outstanding Supporting Actor in a Drama Series. As if that’s not amazing enough, Enoch has also shared screen time with Benedict Cumberbatch in Sherlock. Good for you, Dean. 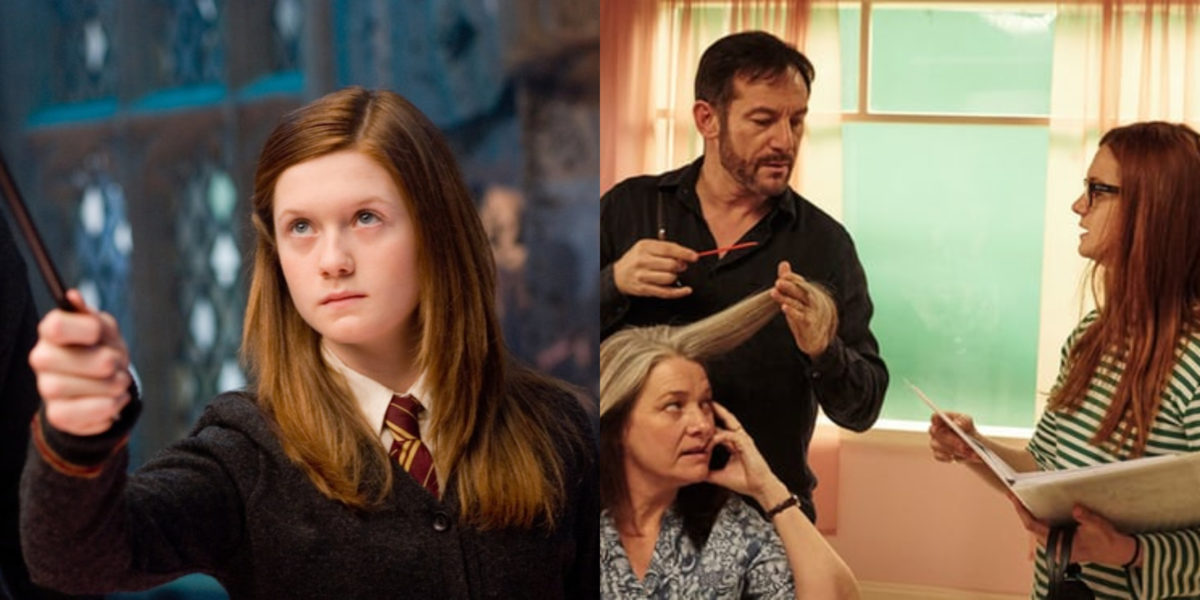 You may know her as Ron’s little sister or Harry’s future wife, but in real life, Wright is no secondary character. Since her character fought in the legendary Battle of Hogwarts, Wright has continued to act.

She’s been in serious films like The Sea and fantasy-drama After the Dark. Perhaps not the starring role in either, but, then again it looks like little Ginny is aiming for bigger roles. AHEM. Our girl premiered her directorial debut Medusa’s Ankles last month. Talk about big steps up! 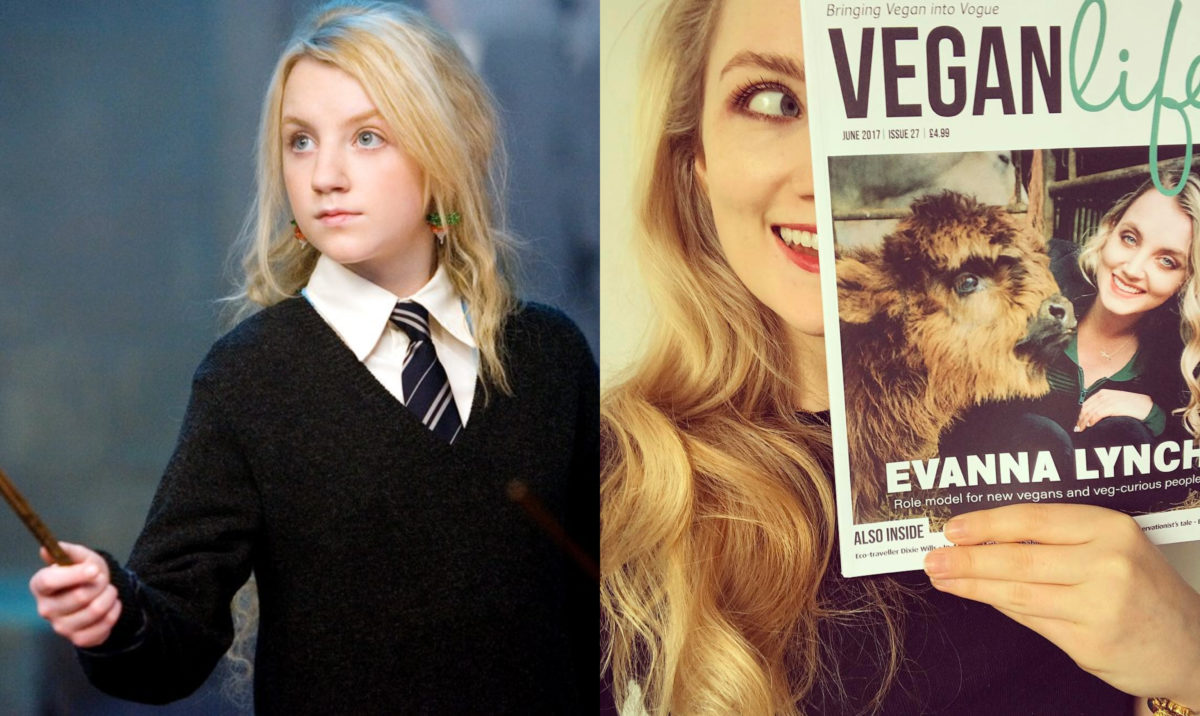 Looney Lovegood. I mean *cough* Luna. The out-of-the-box thinker was delightfully strange, a favorite to many. So what’s going on with this member of the Harry Potter cast now? Luckily for Potterheads, Evanna has kept true to her roots and reprised her role for tie-in HP video games and the parody A Very Potter Senior Year (don’t forget: she was a die-hard Harry Potter fan before she got the part).

Stay tuned to see what other characters Evanna can bring to life. The actress has stated she’s been a little too safe with her whimsy character and is ready for something else. In the meantime, you can check out her vegan podcast “The Chickpeeps.”

Every once in a blue moon, something fantastic happens in fandom: an actor from your absolute FAVORITE world crosses over into another treasured canon. I give you Exhibit A, better known as Domhnall Gleeson. We Harry Potter enthusiasts know him as Ron’s older, gallant brother, Bill Weasley, but in the Star Wars world, Domhnall is anything but gallant. He plays First Order General Hux in The Force Awakens and The Last Jedi.

Domhnall is on a roll, too. You can catch him being a remarkably versatile actor in movies like Peter Rabbit and the horror film The Little Stranger, in theaters August 31. 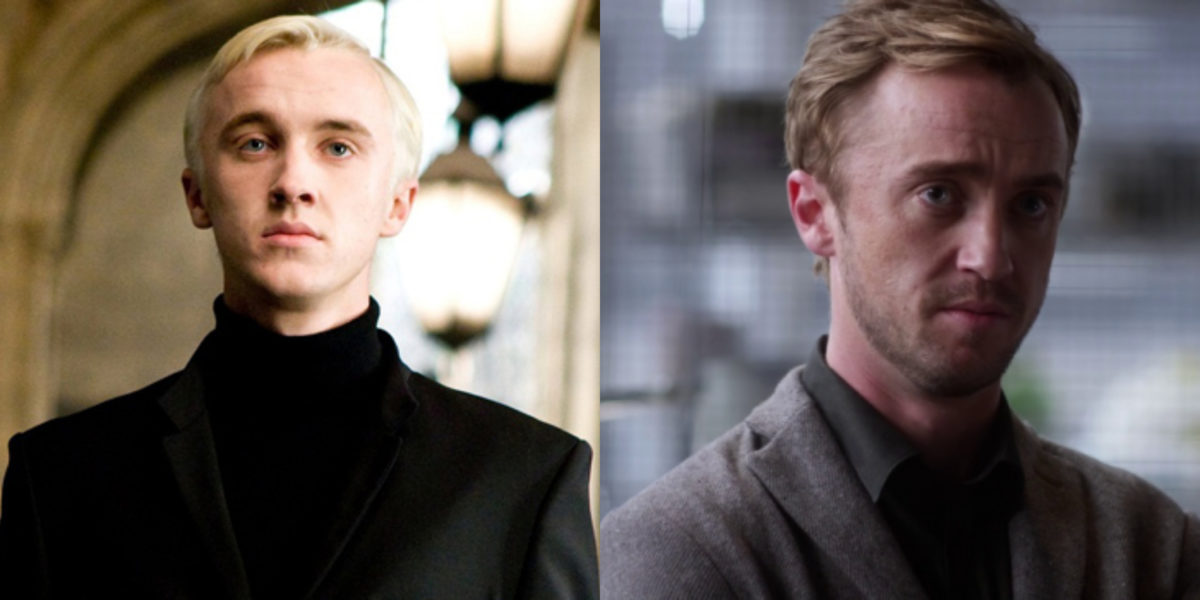 Bad boy Malfoy actor Tom Felton is no stranger to the silver or small screen. This Harry Potter cast member is still landing major roles. You may remember him in the massive blockbuster Rise of the Planet of the Apes. From 2016-2017 he played Julian Albert in TV series The Flash, where he discovered the Philosopher’s Stone (sorry there’s no magical connection here).

Tom will be back in the sci-fi show Origin, which boasts the following synopsis: “a group of strangers struggle for survival aboard a spaceship heading to a distant planet.” Can’t wait to Slytherin to another Tom Felton-filled world! 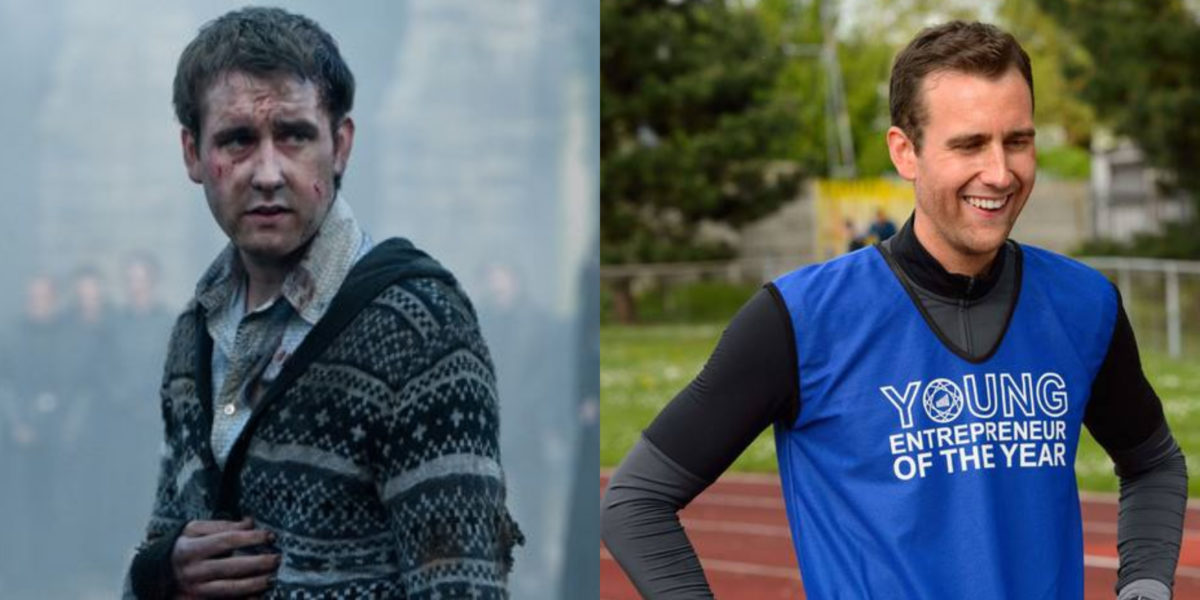 Everyone knows Neville was not particularly good at transfigurationspells, but Lewis, on the other hand … has definitely learned a thing or two from Professor McGonagall. Sometime halfway through the Harry Potter films, Lewis evolved from a geeky sidekick to a noble heartthrob.

It seems he’s caught on to his fan’s heart’s desires and has adjusted his career to highlight his hunkiness even more since ending the series. In 2015, he graced Attitude in almost nothing. He also played super-fit boyfriend to Emilia Clarke in Me Before You. Sadly, Lewis is no longer on the market. He married longtime girlfriend Angela Jones in May 2018. 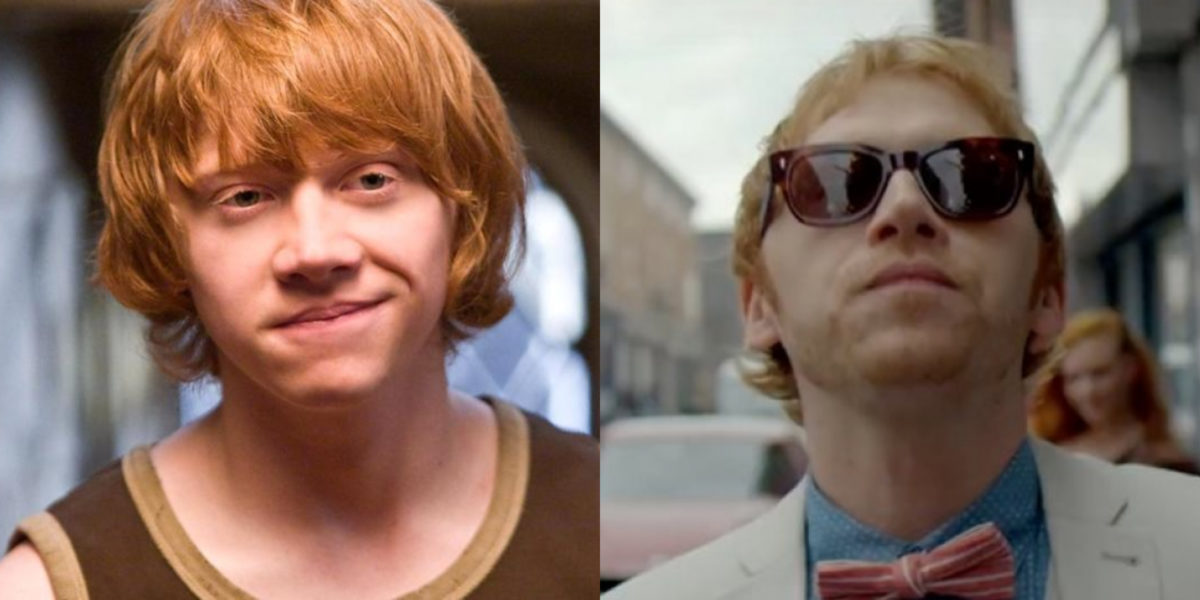 Harry couldn’t have asked for a better right-hand man than Ron Weasley. Sure, he was a bit of a chicken, but they had a bromance that was unmatched. It was something Potter fans truly cherished. However, since the films ended, Potterheads saw a lot less of Grint than they had hoped for. He did occasional appearances in television shows. He even starred in Ed Sheeran’s “Shape of You” music video and eventually did a hilarious skit claiming Ed was really a character he invented.

If you want more Rupert, don’t worry. He has the starring role in Season 2 of Snatch, a Sony Crackle Original. It airs this September. 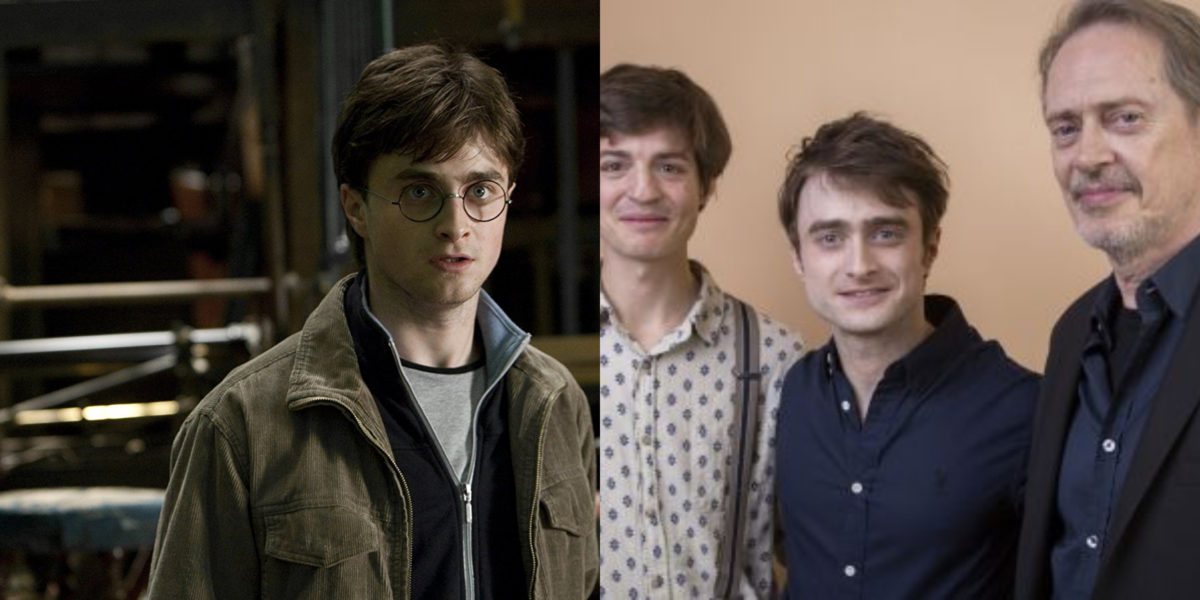 And finally, Daniel Radcliffe. The actor who played The Boy Who Lived and fought off the Dark Lord. What is the central member of the Harry Potter cast now up to?

Radcliffe is a big name, but that hasn’t stopped him from choosing offbeat indies. He’s been in obscure films like the horror-thriller Horns, about a man who may or may not have violently killed his girlfriend but has definitely started to grown horns. His inclination for indie has even shown in his performance in indie-rocker Slow Club’s “Beginners” video.

Radcliffe is keeping us on our toes, though. He’s veering from obscure to TBS sitcom lead this year in Miracle Workers, where he plays God’s (Owen Wilson) low-ranking angel who has to do all the work.

Which Harry Potter alumni projects are you most excited for? Let us know in the comments! In the meantime, for more HP fun, click on the next post below to see which Hogwarts house you should be sorted into! 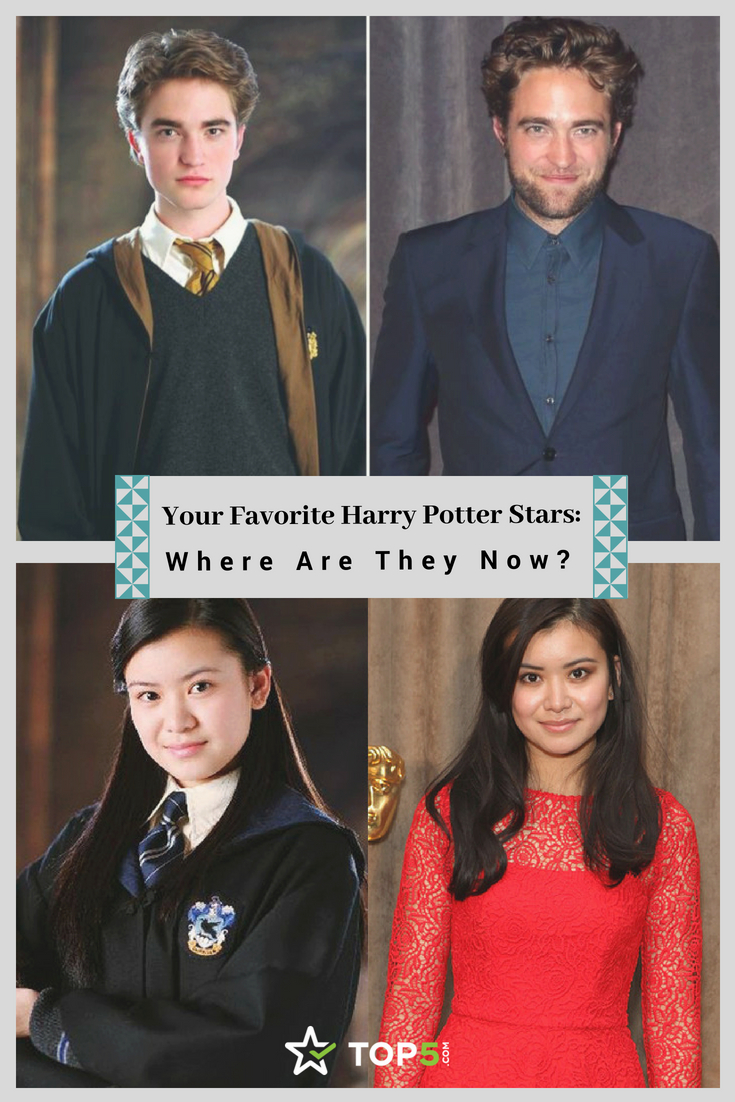 Which Hogwarts House Should You Be Sorted Into? 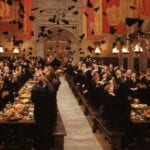