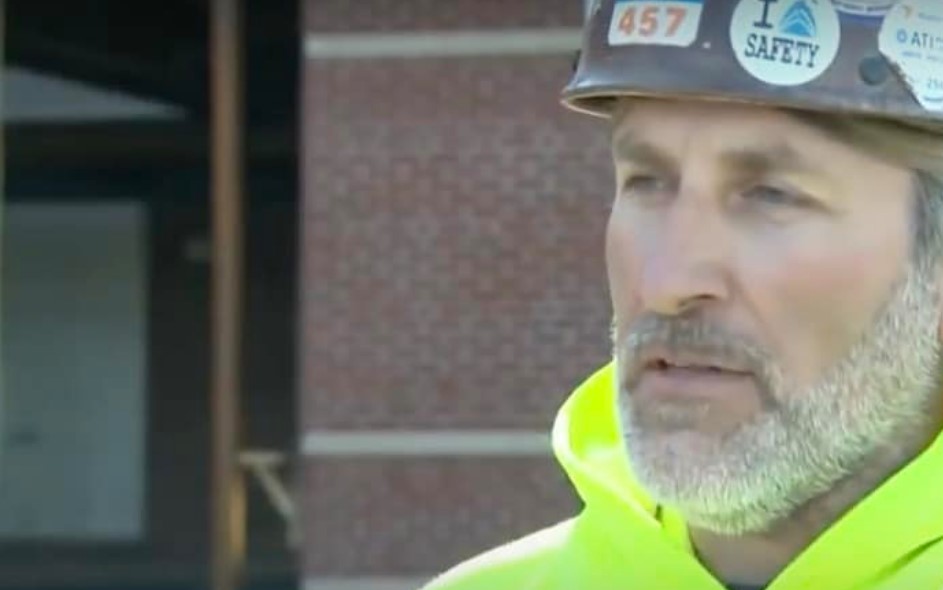 His whipped his head around to better see what was hanging in the window as he shuffled on the beam, like a tightrope walker. He turned carefully on his heel, all too aware that one wrong move could send him plummeting 30 feet to the asphalt below.

But when he saw what she had written there, he almost did.

88-year-old Gloria Porter from Connellsville, Pennsylvania was having a rough week. She stared out her third-story window and sighed. Pneumonia is serious, but for someone her age, it could even be fatal.

Her children and grandchildren visited her every day, but when they left the silence in her room seemed deafening.

Winter was coming to Pennsylvania. Gloria could feel it in her bones. The cold tendrils crept through the city, underneath the windows and doors. She kept herself occupied by looking out her window, and she saw the leaves falling.

People tucked their chins into their collars and scurried by, far below. Then one day, the tedium of her window-gazing was broken by another movement.

Gloria heard the clanging of metal and saw an orange flicker on the wall of her hospital room early one morning. Curious, she carefully got out of bed and walked to the window to see what was going on.

The orange sparks flying from above rained down in a brilliant arc, and she was mesmerized.

After an entire week of boredom, Gloria finally had something interesting to watch from her window. She peered intently at the ironworkers who were reconstructing the entrance of the Excela Frick Hospital.

As she watched them perched high on their scaffolding, she worried for their safety. And she was right to be worried.

Gloria watched the ironworkers shaping the colossal steel structure for a while until one of the workers looked over at her window and their eyes locked. Then, he slowly raised his hand and waved at her.

Gloria was delighted. She had felt so alone, up high on the third floor, and it warmed her heart to be acknowledged. Then, suddenly, the man was gone.

Jeff Reick had been an ironworker for years. He loved watching the metal bend under his hands and become something new. But he knew of the dangers he faced every day, working a hundred feet above the ground.

He was always sure to take precautions. But he had seen it all go horribly wrong before.

When Jeff spotted the little old lady watching him from her hospital window, his heart went out to her. She looked so lonely. She reminded him of his own grandmother who had passed away when he was in his twenties.

And he didn’t quite know why, but he worried about her, standing all alone at the window every day.

Jeff ran down the ladder as fast as he dared, and managed to find some chalk in his toolbox. Then he climbed back up to the scaffolding that was directly in line with Gloria’s window. He waved again to get her attention.

When she looked up, she read the message he had written for her, and her eyes filled with tears.

“GET WELL” was scrawled clumsily on the side of the horizontal bar of metal in white chalk. Gloria was touched. Such a small gesture worked its way right into her heart. So she called the nurse on duty and asked for help with putting together a message of her own.

And when Jeff saw it, it was his turn to cry.

Gloria scribbled two words on a large piece of white paper and pressed it to the window. When Jeff saw the sign, the words hit him so hard that his heart ached. How could this little old lady possibly know ironworker lingo?

The phrase she wrote was simple: “STAY SAFE”. And Jeff and his crew needed that reminder that day.

The cold winter weather had brought snow with it, making Jeff’s work treacherous. It was a difficult enough task to be mindful of his footing in fair weather conditions, but the snow left a dangerous and icy slick on the metal they were all balancing on.

The ironworkers couldn’t afford even one misstep.

Sharing With The World

Jeff was so touched by Gloria’s concern for their safety that he took to Facebook and posted the simple exchange. But he never expected one small interaction between strangers to go viral so quickly.

Soon, the local news had picked up the story, and this inspired the people of America to organize kind acts of their own.

A few days after Jeff and Gloria’s heartwarming yet simple exchange, Gloria was given the all-clear by her doctors and discharged from the hospital. She had no idea that Jeff’s post about her heartfelt note was gaining such traction worldwide.

Then, a lady arrived at the hospital with a note in her hand.

The woman had seen the story on the news, and the philosophy of performing a simple act of kindness for a complete stranger was catching all over Pennsylvania.

The note in the woman’s hand was for the ironworkers at the hospital, and it read: “Your random act of kindness melted my heart!! Enjoy!! Have some pizza on me!!”

When Jeff and his crew opened the envelope, they were floored. Inside was money for them all to treat themselves to some lunch! Jeff was incredibly touched to know that the people of the city cared about the ironworkers’ wellbeing.

And it goes to show how a little kindness can go a long way!

When Jeff was interviewed after his post went viral, he explained why he had made the simple gesture for Gloria: “I just try to lead by example and be a good person. I just hope everybody would do things like that because the world is not a very nice place,” he said.

But there is a growing movement on the rise.

The day of the interaction between Jeff and Gloria happened to fall on February 17, which is a significant date. Gloria was probably unaware of this, but February 17th is National Random Acts of Kindness Day!

And what better way to show that you care about the people around you than to acknowledge them on a very human level and write a personal note?

The tradition has grown and gained popularity each year and is celebrated by groups, individuals, and organizations to encourage acts of kindness… it’s no wonder that it’s a favorite of many.

The principal is simple: perform a small act of kindness for a stranger. It can be a gesture, an act of service, or a small gift.

When Jeff reached out to a fellow human being, his gesture was simple. and when Gloria responded, he was overwhelmed with emotion. The exchange between the ironworker and the elderly lady has touched the hearts of millions–and for a good reason.

The simple act of writing a little note said to both Gloria and Jeff: I see you. You are important. We look after each other.