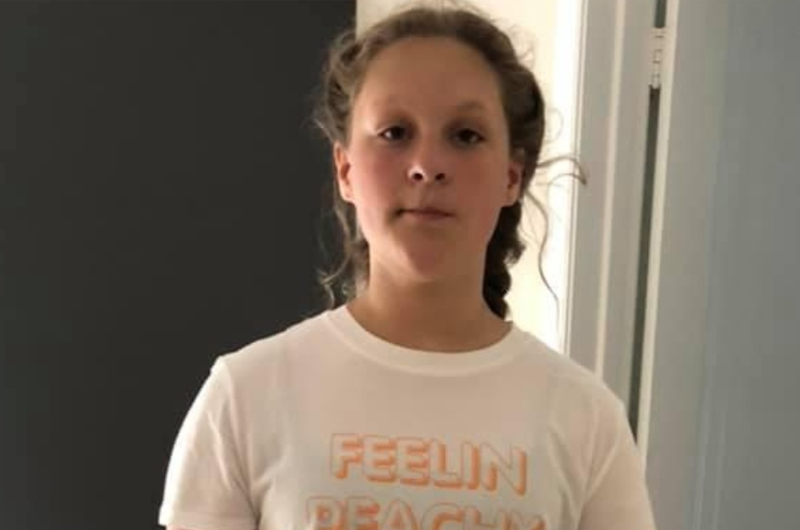 Her Blood Began To Boil

She had heard many stories about school dress code and the drama surrounding it. But it was when her daughter returned home from school in tears, with a note from her teacher in hand, that she felt her blood begin to boil. She had to do something about this.

Mrs. Darling knew picture day was a big deal. She had already gone through the ritual with both daughters for years. It wasn’t just about school-time memories, but something she could hang on the wall or send to grandparents. But this year was extra special.

It might not have sounded like much, but when the three of them went shopping for that special outfit, her eldest daughter had something in mind. She wanted to buy something for her youngest, Vegas. But there was the issue of the dress code.

The list was already ridiculously long, but Darling kept track of the skirt length and other nit-picks. It was still hot in Billings, Montana, so there were plenty of pretty, floral items that would do the trick. She had no idea that the one they would choose would cause a huge stink in the school.

Darling couldn’t help but grin as Vegas spun around in the new dress and then gave her sister a huge hug to say thank you. The happiness carried all the way over to the end of the week when the cameras came out. The little girl, however, would not get a photo.

It started with the sound of someone coming through the front door – far too early for her girls to be home. But there Vegas stood, crying her eyes out in the middle of the living room. The girl sniffed and held out a piece of paper to Darling, looking like she was about to get in trouble.

Darling scanned the note, but only made it halfway through before steam shot out her ears and she was ready to strangle someone. Her daughter had not only been kicked out for the day, but they had also refused to take her photo. The reason? The dress. But the note had more.

Either someone was having a bad day at school, or they had no idea how to talk to parents. The note had heavy connotations about poor parenting, disregard of rules, and even went as far as saying Vegas was a “distraction” to the boys and wasn’t welcome back until everyone in the family “knew better.”

She wrapped her crying girl up in a blanket, turned on the television, and brought her a cup of hot chocolate. It was all she could do as the rage pumped through her veins. But things were about to get worse.

Darling immediately called her mom, Vegas’ grandmother, to ask for a second opinion before the furious mother dropped some sort of nuclear reaction on the school. But what was the dress that caused all the fuss?

Even Darling’s mother agreed it was nonsense. But when she called the school, they stood firm with their actions and even sent a photo as “evidence.” Someone had actually taken a picture of Vegas bawling her eyes out at school right after she had been scolded! It was too much.

Darling and her mother immediately went to social media, hoping for public support and intervention from some higher education power. The entire debacle was because the girl’s shoulders were showing! What was the public reaction?

The response was overwhelming. Everyone agreed the school had not only gone too far, but they had also shamed and embarrassed a young girl. There had been no “violations” before. She had also only been allowed in the class photo if she wore a sweater over top. But what was the school’s reaction?

Darling stared at the response, her hands clenched and jaw tense. What should have been an opportunity for an apology, and relatively simple close to the unbelievable drama, ended up a tanker truck full of gasoline dropping on the already raging fire. It started with the word “closed.”

The first line was as short as it was cold. They considered the case to be “closed” because the girl had been offered a sweater to put overtop but refused. The second part got even worse, and something Darling wanted to call cops to handle – something disgusting.

Not only had the school shined a spotlight on her daughter, but the administrator in charge of the entire debacle went as far as saying that the exposed skin on her daughter shoulders was a distraction for the boys and making it hard for them to learn. Vegas was only 11! What was wrong with these people?!

The school waved the “evidential photo” in front of the world. Darling wanted to scream at the top of her lungs. The first glaring, vile issue was that if boys were looking at her little girl in a “certain way” why weren’t they being held responsible. The second point was even worse.

The message drilled into the whole argument was being made by and adult. This meant that a grown man was looking at her baby girl’s body in a way that should have put in him jail. As if that weren’t enough, Darling had three other pieces of proof that the school was in the wrong.

Vegas wasn’t her only child. She had four other kids (three girls and one boy) of varying ages that had never been cited for any sort of clothing infraction – on picture day or any other day. They wore shorts, tank tops, and plenty of other clothing that didn’t cover them from head to toe. The school fired back.

Every faculty member involved hid behind the district’s “policy.” They spewed excused that they were just following orders from the higher ups. Darling fired back that all of them, including the one who made the rule, should be put in jail. The back and forth was now reaching dangerous levels.

Ready For Another Round

All it would take was one more insane response from the school and Darling was ready to erupt greater than the power of any big bang in the history of the universe. Then something unexpected happened – something she didn’t see coming.

It was radio silence. The last message from the school just regurgitated that they felt the matter was closed. Darling sat at her kitchen table, bawling hot tears of rage. Vegas was stuck in the middle of it all … and all over a simple photo. Then an idea struck her.

The next Saturday, she left the rest of her kids with her grandmother and took Vegas to the mall. Her little girl was confused as first, but quickly welcomed the pampering of a very grown-up experience of getting her hair done. Next, they went to the mall photographer.

Darling pulled out the very dress that had sparked the war. It had been bought as a wonderful gift from one sister to another. She told Vegas to put it on. One way or another, they were going to get those photos. Her daughter’s smile finally came back in full. But Darling still had one more step in her ultimate plan.

Darling was still irate. Despite the public outcry and thousands of shares and countless messages of support, it seemed the school wasn’t going to do anything. But she wasn’t going to let it go. Next picture day, she was sending Vegas to school in a witch costume and would wait to hear what they said about that.