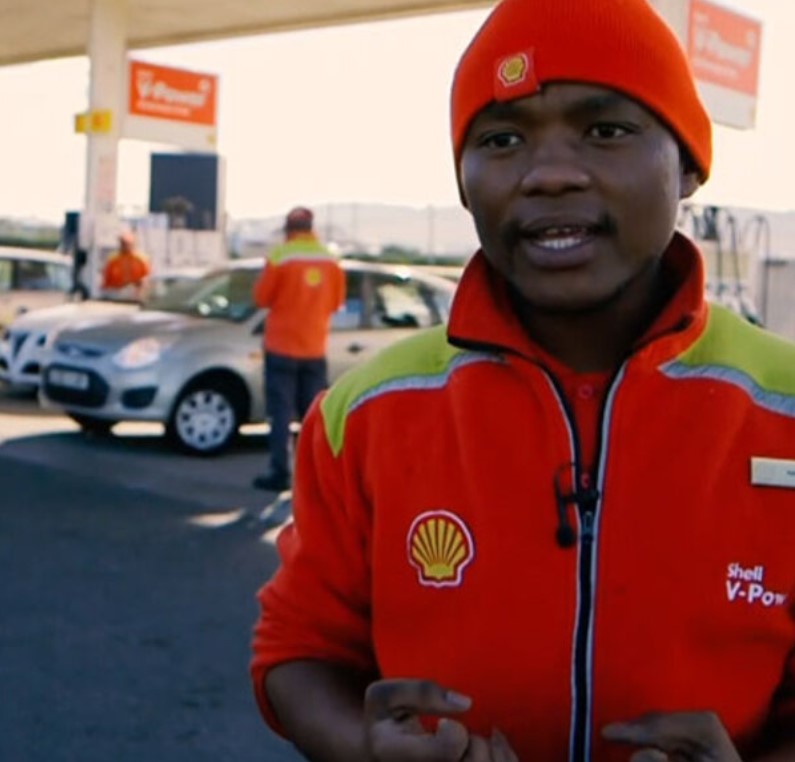 He did his job with a smile and pride. Day in and day out he worked hard at his minimum wage job just to keep food on the table.

But when a woman came into his station with a problem what he did next would have far-reaching consequences. Not just for him, but his children and the whole family too.

Working as a petrol attendant at a Shell filling station in a third world country. A pump attendant was not the most glamorous job in the world, but in a country with such a high unemployment rate, he was satisfied with just having a job at all.

Nkosikho felt genuinely fortunate, but little did he know that his actions were about to change everything.

Just another day pumping gas, cleaning windshields, pumping up tires, and checking motorists oil and water. Some would feel that the pay was not worth the long hours in any and all weather that The Mother City, Cape Town could conjure.

Still, he didn’t complain, but life was hard.

A young woman, Monet van Deventer, pulled up to Nkosikho’s allocated petrol pump. She was on her way to Cape Town when she suddenly realized that her petrol light was blinking red.

She was dangerously close to running out of gas and being stranded on the side of the highway. Her situation got worse.

As Nkosikho waited patiently, washing the young lady’s windscreen, she rummaged through her purse and then her whole bag. But Monet’s bank card was nowhere to be found. A cold chill ran through her as she realized her predicament.

Ahead lay one of South Africa’s most dangerous highways, the N2. As a single female, she knew that she couldn’t afford to get stranded. What was she going to do?

The N2, also known as “The Road To Hell” by locals, is widely known to be one of the most dangerous highways on earth. Mountainous areas, blind rises, and hairpin turns make the drive harrowing enough, but it also has a reputation for being a criminal hot-spot.

Fear gripped Monet as she remembered the recent news stories of those unfortunate enough to have stopped on this highway, and her stomach churned.

The criminals who look for their victims on this particular stretch of road had devised a cunning scheme in order to get motorists to stop on the highway so they can make off with their car and valuables. And the highway patrolmen are not immune to their brazen attacks, either.

Monet remembered the story of an off-duty policeman who had disappeared on this very road just a few weeks prior. Now, she was starting to panic.

The suspects were known to place large rocks in the road, usually on a blind corner so the driver would have no way of avoiding them. With their tires damaged, the motorist would have no choice but to stop. And then, the criminals would strike.

Monet was already an easy target as she was a young female driving alone, but she could only pray that she wouldn’t become another statistic.

Feeling panicked at how far her empty car would get her and a bit sheepish, she began apologizing profusely to Nkosikho for wasting his time. Fears raced through her mind as she thought of possible outcomes for her fatal mistake. And she knew help was far, far away.

But what happened next set everything into play.

A Dangerous Road Ahead

It was a particularly bad day for Monet, and it was growing worse by the second. She looked up to see Nkosikho staring back at her expectantly.

She stammered that she couldn’t find her bank card. He paused for a second, glancing from the spilled contents of her handbag on the passenger’s seat to her panic-stricken face.

It was still early in the morning and the sun hadn’t risen yet. Birds were cheeping to each other in the cold grey light, but apart from the occasional car speeding by, all was eerily silent.

Nkosikho paused, deep in thought. For Monet, the seconds felt like hours. Then, it suddenly dawned on her that this man wasn’t going to let her leave.

Seeing that she wouldn’t get far with what was left in her tank, Monet recalls Nkosikho’s surprising reaction.

She knew her situation was becoming increasingly dangerous, but with no money or help nearby, what choices did she have? Suddenly, Nkosikho was moving, walking around the car until he was out of view. His next move made headlines.

Surprised by his generosity, Monet accepted graciously, she had no choice though really because Nkosikho had already pumped R100 in and paid on his own bank card.

“No ma’am, you can’t run out of fuel on the N2, it is too dangerous,” he said, matter-of-factly. “I’ll throw in R100 and then you can just bring back my R100 whenever you are near again,” Nkosikho assured her. Unbelievably, he didn’t even ask for her number or name. But Nkosikho’s story was just beginning… and so was the backlash.

Gratitude In Her Eyes

Amid a thousand thank-yous, the woman drove off promising that she would be back soon to repay him.

That random act of kindness has changed Nkosikho’s life forever, but still, all he has to say about it is: “I didn’t care about the money.  Saw the gratitude in her eyes. And saw that she appreciated what I did. It made me happy,”

Monet did just as she promised, she was back the very next day with Nkosikho’s R100 (around $7, but no small change in South Africa) as well as a box of chocolates to thank him for rescuing her the day before… and that’s not all.

Nkosikho is being rewarded with serious cash after Monet posted her story on Facebook and set up a BackaBuddy crowdfunding campaign.

In no time the newspaper’s had picked up the story, it was all over the radio, and thousands of people took to donating anything they could towards South Africa’s petrol hero. And you won’t believe how much money it raised!

The crowdfunding set up in Nkosikho’s name accumulate almost half a million rand and in addition, Shell will also donate R500 000 (over $28,000) to a charity of Nkosikho’s choice — that’s an amount that is more than eight years’ worth of his salary! He was even flown to Zanzibar as Shell’s poster boy for “excellent service.”

“His story will be shared with the Shell global community to inspire others further. We will also donate R500,000 to a charity organization of his choice to pave the way for many others,” Shell announced.

The job turned out to be very rewarding after all. His singular act of goodwill now seems to be catapulting him to fame and fortune. Born and raised in Lady Frere in the Eastern Cape, Nkosikho came to Cape Town at the age of seven.

He was raised his single mother with his younger brother and grew up spending his time in church. Now, what would he become now that he was famous?

Not On His Watch

“Growing up, I wanted to be a soccer player, but as time went on, I realized that being employed and dependent on money is the root of all evil and all problems we are faced with in the world today.

I am the way I am today because of my faith” he said. And that’ why he couldn’t let a lady take the chance of breaking down… Not on his watch!

“I am a very private person, I don’t like being in the limelight and now that small gesture has turned my life upside down.”

“I highly appreciate South Africans who have embraced me and shown me even greater gratitude than I had ever expected. But,” The 28-year old father of two continued,  “I would like to get back to just being me.”

“What is happening to me now has opened my eyes to a whole new world; it has made me realize that humanity still lives. We as a nation also still need to move away from the notion that apartheid and racism have to form part of our daily lives.”

“We have to hold each other’s hands and unite as a people, and in that way, the spirit of Ubuntu will grow and live on.”

“People treat me like a celebrity now, and I am not – I just helped a fellow human being,” he said. “I love chatting to people and getting new views on life and sharing my views with them.

For me, working here is not just a job, but it is a place where I can grow my knowledge of people in general,” Nkosikho said.

“Helping customers is what we do; we are here to provide good, quality service. If it means going the extra mile and paying for a customer’s petrol, then that is what we do,” said the newly discovered South African treasure.

Not many other people would even think this way. Monet was just so lucky that Nkosikho believed these words to be true.

“I am, however, confident that a sign from above will come and we will make a decision that will not only be pleasing to us but the man above as well.”

The Company Is Proud

“Shell is very proud of Nkosikho’s act of kindness and willingness to go the extra mile in assisting a customer pay for much-needed fuel. We believe that this is a true spirit of Ubuntu. A commitment from our people to make our customer’s journey better.”

Hloniphizwe Mtolo, the company’s chairperson in South Africa, called Nkosikho after all this developed. He congratulated him and give him the news of his selection for cash rewards, awards, and travels.

The young man was overwhelmed and shocked. At first, he thought that this could possibly be true, that it was all an elaborate prank. But as the news sank in he realized that he was living a dream.

Nkosikho had to ask twice whether he was actually going to go to the awards and said someone needed to splash him with water. “Yes brother, it’s because you did the right thing,” Mtolo replied with a smile. But South Africans who were following the story were less than pleased with the next developments.

However, BackaBuddy, the site which hosted the fundraising campaign, tweeted some news that would anger all of Nkosikho’s followers and fans.

They made a statement and said that the funds raised by the campaign would not go directly to Nkosikho, but instead would be managed by the crowdfunding platform. The backlash and criticism started pouring in on Twitter and Facebook.

They claimed that Nkosikho expressly instructed the platform to manage the money for him as he “doesn’t live in a safe area.” Of course, the humble petrol attendant’s fans were having none of it. Many were suspicious that it was all a scam on BackaBuddy’s part, and that he would never see the money that they had donated.

“Nkosikho will have full control of how his funds are utilized. Based on his personal request, the relevant institutions (children’s education and living and home expenses) will be paid directly by BackaBuddy,” the platform tweeted, attempting to quell the concerns of people who donated from all over the world.

But Nkosikho has some reassurance for his followers.

“I asked BackaBuddy to keep it for me,” he said. “I live in Khayelitsha and it is not safe for me to have it in my account. I have asked them to hold it because there are a lot of people who are going to turn up [looking for money].”

All eyes are on Nkosikho, but he remains humble: “All focus and praise should go to God, who inspires all good deeds.”