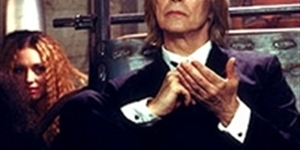 Music videos aren’t the only place for musicians to gain film credits; since the advent of the moving image, many musicians have set their sights on silver screen notoriety. There are few who can truly be both musician and actor, but these five artists manage to both blend into their role and stand out as the face we all know.

5 Keith Richards in “Pirates of the Caribbean”

The only saving grace of the second and third “Pirates” movies, Keith Richards appears as the crusty, drunken pirate father of everyone’s heartthrob Jack Sparrow (Johnny Depp). It seems that the casting director nabbed Richards off the street and shoved him in front of the camera. Whether Richards can act or not has nothing to do with the fact that he is the embodiment of cool, and next to Depp (the embodiment of sexiness), he is smashing. Richards’ presence is fitting, as Depp stated that Richards inspired many of his mannerisms. Looks like Keith came full circle in this one!

The Ramones aren’t so much a guest act as they are the feature of 1979 musical-comedy-film “Rock ‘n’ Roll High School.” A cult classic, “Rock ‘n’ Roll High School” follows Riff Randel (PJ Soles) as she attempts to meet The Ramones. The plot is second to the music. At some point in the film the principal takes Riff’s concert ticket away, and the PTA begins burning records. Led by Riff, the students revolt, which draws The Ramones to her school. The school literally explodes at the end of the movie, which is unrelated to The Ramones, but hilarious none the less.

3 Flea in “The Big Lebowski”

It’s no surprise that Red Hot Chili Pepper’s bassist Flea would end up as a German nihilist assassin in the amazingly absurd film “The Big Lebowski.” A blip of a role in the grand scheme of the film, Flea’s addition to “The Big Lebowski” is more about hilarity than acting chops (especially in comparison to John Goodman and Jeff Bridges). He has had other film appearances (“Dogma,” “Fear and Loathing in Las Vegas,” “My Own Private Idaho,” amongst others) but in “The Big Lebowski” he takes on a character who’s entire identity is about being a nihilist – something kind of hard to act one might imagine. Flea’s stage antics make him ideal for this kind of ludicrous character.

2 Mos Def in “Hitchhiker’s Guide to the Galaxy”

Before the 2005 movie adaptation of Douglas Adams’ novel “Hitchhiker’s Guide to the Galaxy,” Mos Def had already appeared in a variety of shows and movies in small parts. In “Hitchhiker’s,” Mos Def is featured prominently as – wait for it – an alien. Alongside Martin Freeman’s stodgy British humour as Arthur Dent, Mos Def shines. He somehow strikes a semblance of stoic silliness as Ford, the semi-half-cousin of galaxy president Zaphod Beeblebrox (Sam Rockwell). Mos Def sells the character exceptionally well (debated by some die-hard novel fans). Who would’ve thought that the exceptional rap musician would also be a great alien journalist?

David Bowie has been featured in several films in the past 30 years. He is truly a chameleon, so it shouldn’t be a surprise that he shows up in Ben Stiller and Owen Wilson’s comedy about male models to be the judge of a “walk off.” The complete absurdity of the movie is only validated by Bowie’s presence. Bowie plays himself, but Bowie himself is also a caricature of a real person, so it probably wasn’t that big of a stretch. Famous for crafting characters (like Ziggy Stardust and Major Tom), Bowie’s portrayal of himself in “Zoolander” is just as hilarious as the rest of the movie.