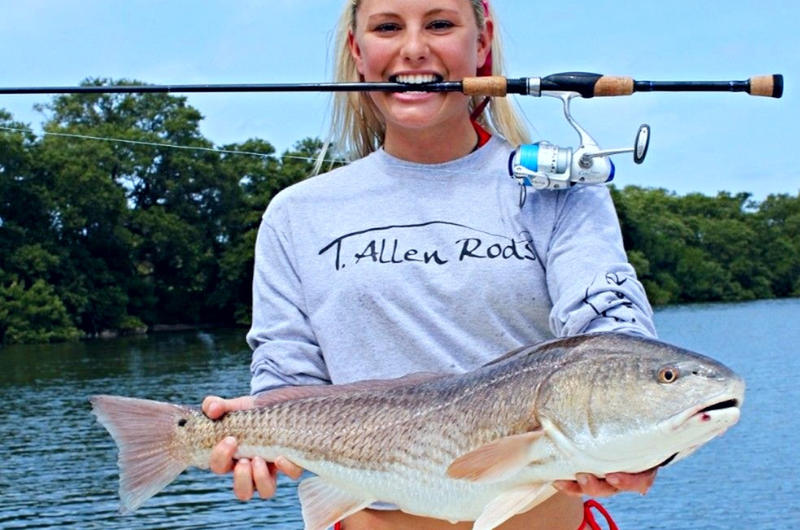 She held the fish in her hands, it wriggled as it tried to get away. Her husband took his camera and zoomed in on her catch. He turned the lens and it came into focus.

That when he did a double-take. There was something on the water behind his wife. It was something moving. He bellowed to his friend on the boat that they should move in closer and figure out what it is.

Birthday On The Water

Robin and Bruce took their friends, Michale and Shawn Sahr to the Gulf of Mexico to celebrate their birthday just like they did every year. It was a tradition the friends had had for a long time

They were far out on the water so they didn’t think they’d see anything but the beautiful water, the horizon, and maybe they’d see another vessel if they were lucky.

Something On The Water

Bruce was enjoying himself with a beer in his left hand and a fishing rod in his right. The fish were coming in hard and fast so they were having a relaxing time.

They caught a huge fish that could barely fit in their hands. He gave the fish to his wife and took out his beloved camera. As he peered through the camera lens he saw something that he wasn’t expecting.

He looked through the lens again and turned the lens. The bright orange object popped against the beautiful blue ocean water. It was being jostled by the waves as it floated on the surface.

Maybe a buoy? No, a buoy would be bigger. Maybe some Flotsam? He narrowed his eyes to see it a bit easier, then they suddenly widened in disbelief. Did he see hair? He asked to be taken closer.

The object drew closer as they made their way to it. They could see what they thought was a life jacket floating on the surface. Bruce prayed that it wasn’t. He really hoped that it was just flotsam.

But what he saw tied his stomach in a knot. Along with what he suspected was the hair he also now saw… appendages? No, please no.

He told his wife to look away as he took a closer look. He didn’t want her to be traumatized.

He threw the camera down and went right to the edge of the boat. He felt like he was going to throw up but he held the desire back. It was partly submerged underneath the surface but he could see a small nose. As the most horrible thoughts rang out in his mind he finally let out a sigh of relief.

“It’s just junk, a children’s toy maybe?” They all had the same thoughts on the junk floating on the surface. Bruce took his fishing rod and started prodding at it.

The pile suddenly moved and Bruce jumped in the air. Was there something alive inside the pile? He prodded it once again and once again it moved.

Bruce got the fright of his life as the orange pile of garbage moved more erratically and started swimming towards the boat with weak arms stretching out for their vessel.

It was finding it hard to breathe and started coughing violently. Bruce shouted: “Oh my god, get a blanket! Quick, he’s drowning!” The men on the boat grabbed out towards the water.

They dragged it onto the boat from the icy water beneath. They could now see the pruney body that they pulled aboard.

This is when Bruce’s wife took charge. She pushed her way past them and wrapped it in as many blankets as they could find. “Are you ok? Don’t worry. You’re safe now. Where’s your family?” The men couldn’t believe what they were seeing.

They had, in fact, rescued a Jack Russel. Once the puppy had made contact with the boat the collapsed. They must have been struggling for quite some time and could no longer keep themselves up.

The dog also needed to be hydrated quickly. He was shaking for more than an hour before he finally calmed down. Where did he come from?

There was no identification or other details and microchips were useless there, so Bruce called the coast guard.

To their surprise, someone had indeed reported a dog missing from their boat … 3 hours ago. They exchanged details to make sure it was the right animal. The result?

It was very much the dog that went missing, and his name was Jagermeister.

“Give us your coordinates and we will come to you.” Bruce gave the numbers and then sat back to watch the amazing turn of events. It didn’t take long before the little guy started walking around.

“He was shaking like a leaf,” Robin later explained in an interview with the New York Daily News. They knew they had to get him warmed up as fast as possible.

“We got towels wrapped around him and got him calmed down – it took about 30 minutes,” Robin recalled. But how did Jägermeister take to the strangers who had saved his life?

Fortunately, Jägermeister didn’t mind at all. He seemed to understand that he was now in safe hands. “He was very friendly [and] very sweet,” Robin said.

What’s more, Jägermeister actually seemed to enjoy spending time on the boat with his new friends and wasted no time claiming a prime spot..

He nuzzled, played, and licked the four of them – beyond grateful to his rescuers.

He even got so comfortable he plopped himself on the top deck to do some sunbathing – no one could blame him for wanting to get warmer. But the puzzled friends still had a million questions.

“After he got calmed down, he hopped up on the top deck of our boat and sunbathed,” Robin said, laughing. Now that the little dog was out of the woods, they needed to reunite him with his owner.

When the coastguard finally arrived, the dog quickly leaped aboard the rescue vessel and made himself comfortable there, too. But where were his owners?

Bruce watched as the Jack Russel scampered on board the coast guard’s boat. It would be a quick trip back to his owner (who was waiting for him onshore).

The four friends decided to follow and watch the reunion. As they approached the shore, they saw Jägermeister’s owner run forward and into the water.

Relief swelled and the tears flowed. The dog jumped into his owner’s arms and wagged his tail furiously with joy.

But just what had happened? How had the dog ended up so far out at sea by himself? Thankfully, he had been wearing his bright-orange life jacket, or he may never have even been spotted!

Joey Myrick had all the answers. Joey and Jägermeister were on a boat trip when Joey stopped to check the hull.

While he was out of view, Jägermeister decided to leap overboard to go off on an adventure of his own. When Joey had discovered that his beloved dog was missing, he was worried sick.

When asked how she felt at the time of the reunion, Robin said: “Wonderful. It was heart-warming and heart-breaking at the same time.

We all got tears in our eyes… he ran up and the dog started licking his face,” Robin continued,“…we were all crying. It was really a very, very heart-warming moment. It was very happy!”