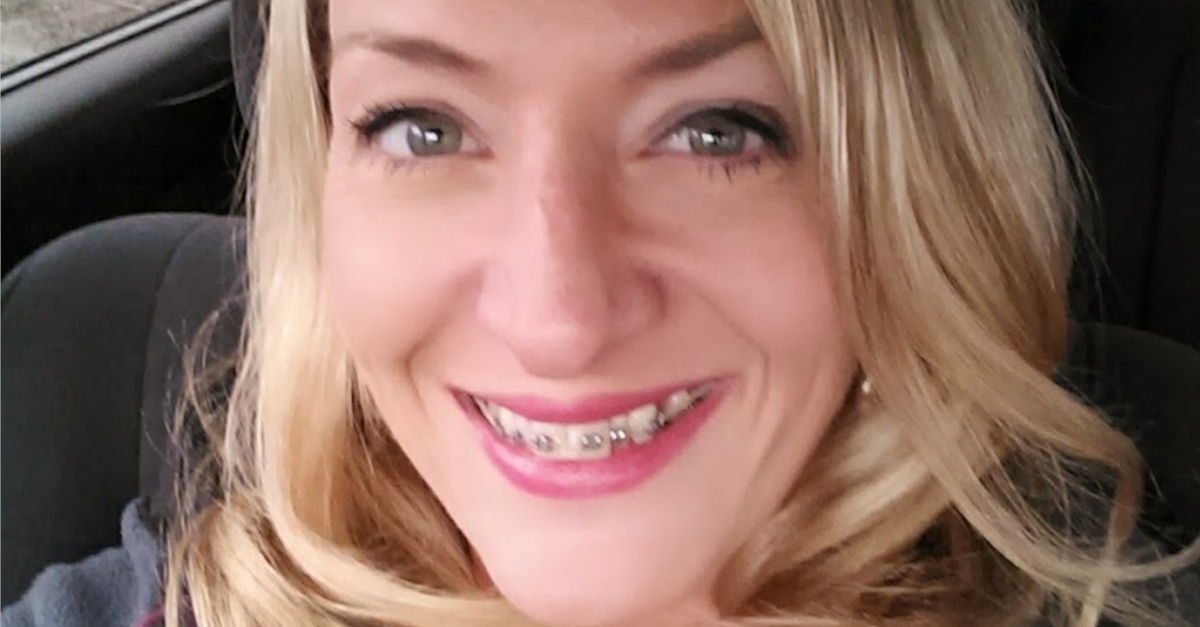 The girl was so tiny that the audience could barely see her face from over the podium.

Everyone stared at her with the same adoring look on their faces. It was like they were staring at a puppy or a newborn baby. But as soon as the little girl opened her mouth and began her speech, everyone’s expressions changed instantly. The little girl might have been the student, but she was about to school every adult in there.

Everyone thinks their child is special.

But for Jennifer Smooth of Florida, she was very away that her daughter Sydney’s unique nature was something that put her far past anyone else in her grade – even surpassing some adults. So, when her little girl came home with puffy red eyes and fresh tears on her cheeks, Jennifer knew something was very wrong.

Sydney proceeded to share her day at school. Things had started out normal – friends, classes, and lunch. But when it came time for her 4th grade class to take the standardized test, what she had said apparently had made the teacher angry. But that wasn’t all.

Her little girl might have only been 9, but the way she picked apart everything that was wrong with common core and testing made Jennifer feel like she was talking to any adult with a bone to pick about education.

What Sydney said next nearly knocked Jennifer out of her seat.

Apparently, there had been a test form that the children had to sign – one that stated they were not allowed to talk about the test with their parents or anyone else.

When Sydney refused, the teacher got angry and sent her to the principal’s office. When she refused again and went on to explain how the education system was flawed, she was told she was suspended.

Jennifer sat in the kitchen, trying to hide the anger that was bubbling inside her.

How dare they try to make a child sign a secret document about their very education and then kick her out! She grabbed the phone and pounded the school’s number into the keypad. After thirty minutes on hold, it was clear that no one was going pick up. There was only one thing to do.

Jennifer jumped online, her fingers still shaking from rage, and found out when the next school board meeting would be held. Next, she asked Sydney if she wanted a chance to speak during the meeting as well.

Her little girl stood straight with an air of confidence that would intimidate any grown up and nodded with certainty. She grabbed her notebook and started scribbling down her thoughts.

Time To Speak Out

To anyone on the outside, the speech sounded like Jennifer had written it on behalf of her little girl, but no.

Every thought was Sydney’s alone. She just needed a little help here and there with a thesaurus or forming a couple lines into something fitting for a school board. The rest was all Sydney – and by god those board members were going to get an earful.

When the day of the meeting rolled around, Jennifer was a bundle of nerves. Her baby girl, however, was as cool as a cucumber.

When Sydney’s name was called and she took to the podium, the audience cooed with “awwwws”, chuckles, and other sounds you’d make for a child. Boy were they in for a surprise.

“Hello fellow members of the school board. Today I will express my concerns over the FSA tests.”

The smiles grew, but when Sydney said, “This testing looks at me as a number. One test defines me either as a failure or a success through a numbered rubric.” The smiles disappeared and everyone shared the same expression of surprise. But that wasn’t all.

Sydney went on to explain that she didn’t feel good about signing a form that forbids her from talking about it with her mother. The secretiveness wasn’t only wrong, but probably illegal. “I have the right to talk to my parents about any and everything related to school and my education.”

Finally, everyone was looking at her seriously – like a person with a legitimate grievance and not a child having a cute disagreement. The next point made the board members do a double take.

“Second, why am I being forced to take a test that hasn’t even been tested on students here in Florida?” You see, the company that was contracted to create the exam tested the rubric in Utah.

Sydney proceeded to explain that the tests are creating a stressful, unhealthy environment for everyone. Why couldn’t they break the test down into three parts throughout the year? By the time she was finished and took her seat, the entire room gave her a standing ovation. But Jennifer was next, and she had a bone to pick.

She took the podium and explained how it was this very thinking she had shared with her teacher on the day of the test … and that she had been kicked out because of that. Then there were the ignored phone calls and message when Jennifer tried to contact them.

By the look on everyone’s faces, she knew the point had been made clear. The ball was in their court, and they had better deliver.

It was less than 24 hours later when Jennifer got a phone call from the principal.

The apology was laced with PR drivel but at least her little girl could go back to school. She thought things would end there, but after only a couple days, she found out the video of Sydney’s speech had gone viral!

Jennifer and other parents were alarmed to learn that Sydney hadn’t been allowed to discuss the test with her mother and wanted to know why.

Sydney had to sign a non-disclosure form that prohibeted her from discussing the test’s contents with anyone – including her own parents – before undertaking the reading section of the test. Naturally, everyone wanted to know what the school was playing at.

Sydney had felt like the non-disclosure form prevented her from discussing how anxious she was after the test with her mother. “My daughter talks to me about everything,” said Jennifer. “She was very upset.”

The school, however, insisted that the non-disclosure agreement was not to prevent children from talking to their parents about the test, but rather to prevent them from sharing its contents with students who hadn’t taken the test yet.

The video of Sydney’s passionate speech quickly spread on social media, and a link to the video was even included in a feature piece for the Tampa Bay Times.

Soon, Jennifer couldn’t keep up with all the interview requests from blog sites, newspapers, and even television and radio stations. But what is it about Common Core and the Florida Standards Assessment that has parents in an uproar?

The Florida Standards Assessment is a hot-button issue embroiled in a statewide debate – and it goes hand-in-hand with Common Core. Many people agree with the points Sydney brought up in her speech – including her own mom.

Opponents of the FSA say the new system was rushed into place before it was proven to be a valid method of assessing students. With no meaningful data on whether the test was viable, why hadn’t the state Department of Education taken a one-year break from grading schools? And that’s not the only problem.

Another issue with the Florida Standards Assessment is the fear and anxiety it instills in students. The first wave of Common Core testing, developed by Pearson Inc., was met with outrage about its length, appropriateness, and difficulty.

Most students felt stressed and unprepared – reacting to the test with anger, tears, anxiety, and shock. The reaction to the test was so extreme that administrators everywhere requested guidelines for how to handle test papers that had been thrown up on. And the controversy only grew.

The Common Core curriculum has grown extremely controversial in recent years, with schools gradually moving away from it. In Florida, new math, English, and literacy standards were adopted that were considerably higher than previous standards.

Common Core, unlike previous curriculums, was touted to better prepare students for a career or higher education. However, parents and teachers immediately spotted problems with it.

The Role Of Big Business

Common Core was reverse-engineered to teach the skills needed to find a job, and it was spearheaded by billionaire CEOs and corporations (including Bill Gates).

There’s some suspicion that Big Business has an ulterior motive for getting involved with the educational system. And the conclusion reached by many parents, students, and teachers is a lot darker than you may think.

According to the information page for a Facebook group called “Stop Common Core in California’s Central Valley,” “Public schools are ripe for takeover. If corporations can control the content, they can use our free tax dollars for their profit. Schools will manufacture students to become obedient workers rather than free thinkers.”

The fact that the top educators in the country were not consulted while Common Core was being developed also tells us something.

Supporters of Common Core believed that it was a much-needed educational reform that would eliminate equality disparities and improve educational standards on a national level, opposers saw it differently.

To opposers, Common Core is an infringement on a state’s right to control their own curriculum. Parents, students, and teachers have come out in droves to point out that Common Core was never developed with democracy in mind and had very little input from educators when it was being developed.

Opponents of Common Core believe that the uniform set of state standards promotes a “one-size fits all” approach to education.

Teachers who disagree with Common Core understand that children learn in different ways and adapt their teaching according to the individual student’s needs. Common Core, on the other hand, forces individuals to conform to its standards. But that’s not all.

While supporters insist that Common Core is not a curriculum but rather a set of standards and goals, some experienced educators proclaim otherwise. Common Core state standards finely detail exactly what is taught when grade-by grade, as well as how it is taught.

Some say that Common Core was a sneaky way to get around the legal barriers that prohibit a nationwide federally-enforced curriculum. Common Core also takes the teaching power away from teachers.

Afraid to be negatively evaluated, teachers have resorted to teaching their students how to parrot the answers to test questions instead of developing an understanding of the topic as a whole.

While standardized testing has been the backbone of the American educational system for more than a century, students like Sydney, teachers, and parents have had a problem with it.

As Sydney pointed out, standardized testing reduces an individual to a number and takes away their free-thinking. And the “new” Florida Standards Test is just Common Core with a new label. And, as we all know, Common Core has been controversial from the beginning.

The first Common Core tests were developed by the corporation Pearson Inc. and adopted by state school districts in 2010.

They even included corporate promotional material and logos on the test pages. By early 2014 – after Sydney and others took a stand – Common Core faced such severe backlash from the public that it was was repealed in many states.

Jennifer looked over the footage of her daughter and read what the news outlets were saying.

“How is a 4th grader more insightful than the people who are in charge of her education? And why was she punished for pointing out a crucial flaw in the system?” Jennifer leaned back with a huge smile. Sher daughter truly was special.