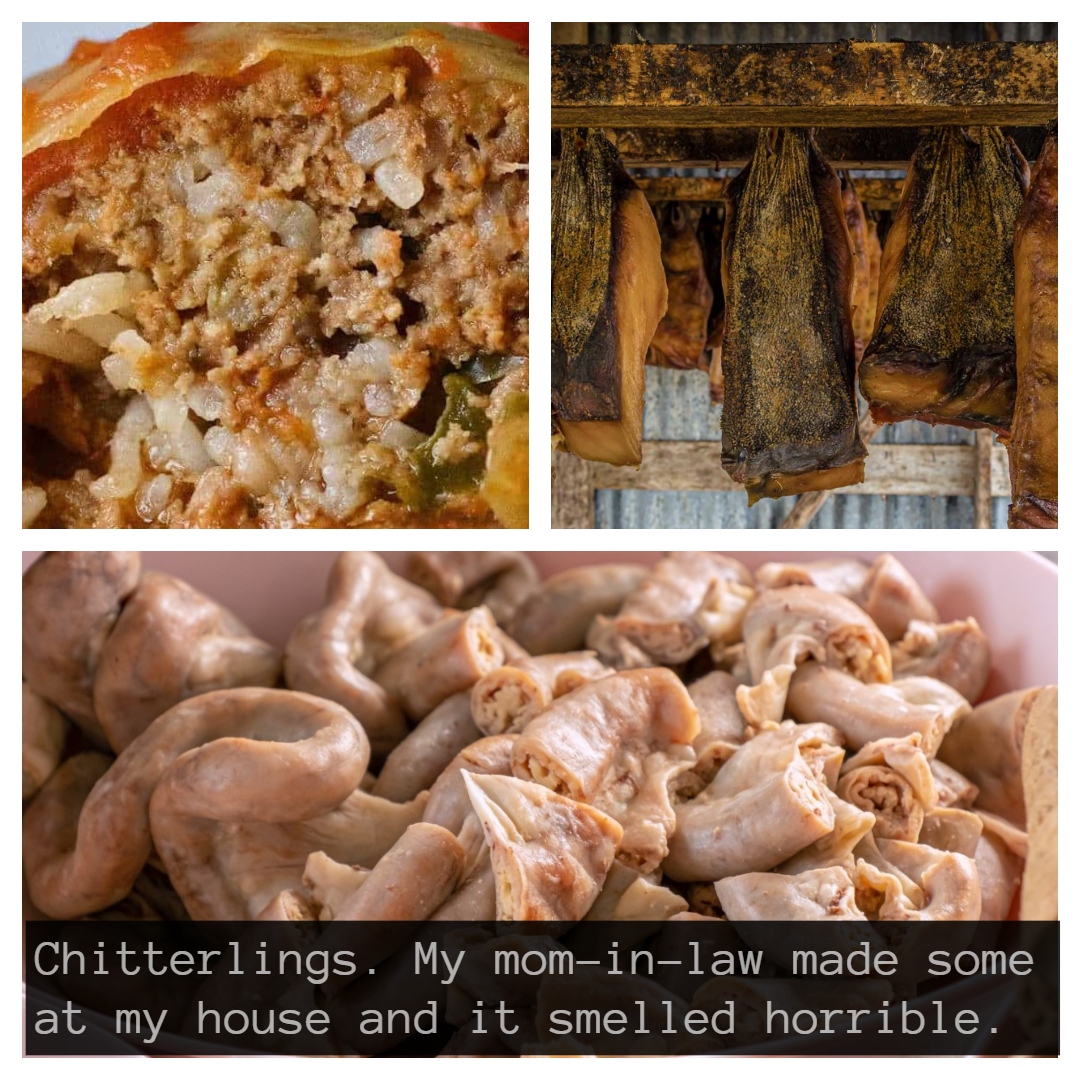 Is It Really That Good?

People have a knack for talking about food, but some of these dishes’ fame doesn’t come from how yummy they are. These interesting foods are cause for debate – you either love them, or you hate them.

Some swear by them and their recipes, but many have called it a sham and said they’re so bad you have to pretend to like them. Here you will read about some of the worst dishes that people still believe are the best.

Insides Of A Pig

Chitterlings. My mom-in-law made some at my house, and it smelled horrible. They seem to have an aroma that almost seeps into every part of your soul. For anyone that doesn’t know, they are the small or large intestine of a domestic farm animal.

Most commonly, they are from a pig, and they are terrible. I don’t know why my mother loves them and thinks they taste good.

She left it cooking while we went out somewhere. When we came back, the cabbage smell whacked us in the nose, and I said I thought the dog pooped on the carpet. She believed me for a second before realizing it was a cabbage stank.

I can’t imagine someone coming in from a long day of work and tucking into a plate of fishy-smelling, ammonia-flavored chewy shark chunks that make you smell like a bait camp for the rest of the evening.

Lutefisk, my dad used to actually look forward to coming home and having my mom prepare some for him. A lot of Scandinavian countries make this dish and like it, but not me.

It’s white fish meat dried out and fermented. I hate anything fermented, so that’s why I don’t like it.

Someone says that they had to force themselves to eat Swedish sausage at Christmas dinners for 20 years before they could give up the act. They managed to make the switch to Swedish meatballs instead.

They say the meatballs taste a million times better than the sausage, and they are thankful they made the switch.

Another person speaks of how they hated salted licorice, describing it as vile. Their wife had convinced them to try it again about a year ago and was surprised to find they liked it!

They used to live with a Norwegian flatmate who loved it and gave him some Turkish Pepper to try. That was something he would never have again.

I adore salmiakki. You probably know this, but the cat smell is usually only present in very highly salted salmiakki (the salt is literally ammonia based). Most salmiakkis are rated by the amount of salt between 2%-7%.

Why in God’s green earth would they opt for ammonia-based salt over good old not-cat-pee-scented salt? When the recipe was first created, did they only have pee salt?

There’s an emotional reaction to foods (and other sensations) that develops over time. Eventually, it gets to the point that the food–regardless of what’s disgusting about it–makes you feel something enjoyable and pleasant.

If I’d never eaten Blue Cheese before, I’d be disgusted by it now. But, I unknowingly had some when I was 4 or 5 at a family Christmas party in a cheeseball. When I eat Blue Cheese these days, it reminds me of warm, happy Christmases of decades long ago.

Fondant on like wedding cakes. There’s even a subreddit called r/fondanthate. I left that sub a while ago because people bragged about how they secretly didn’t put fondant on cakes for customers who explicitly ordered fondant.

I don’t care how disgusting something is. You don’t get to decide for someone else that them eating it is wrong (this obviously does not apply to foods that actually are unethical to eat, such as live octopus)

Gold-leaf has no real taste- it’s there so that you can feel rich and entitled. It literally acts as a barrier between your tongue and flavor. If you have food covered in gold leaf, it makes the food doesn’t taste like anything.

It’s quite disappointing. Those sorts of lists can actually be pretty interesting, especially if they tell you why a certain food is expensive.

As a kid, I never understood adults saying things were too sweet. As I’ve gotten older, there is definitely certain food that is too sweet or times when I really don’t want sweet foods. I don’t get it.

It has just started to happen to me. I can no longer handle how sweet one of my favorite snacks from childhood is. It’s so sad.

Bitter Gourds. I am such a fan of bitter gourd. I live in southeast Asia – we slice it thinly (or, you know, maybe a centimeter thick if short on time) and stir fry with egg, sometimes with dried shrimp.

A lot of people in western countries don’t like bitter gourds, but it’s actually pretty common in most Asian countries.

My dad loves karela sabzi so much that he literally grows bitter gourds in our backyard. I guess it truly is an acquired taste. I never got used to it, but after a while, it’s fine. It just takes a while(I can eat a few ).

There’s also some dish where he picked it, but it’s way too bitter for me. I really don’t know how people like it. Maybe it’s because they grew up with it?

Escargot is actually pretty tasty, the snails themselves have a clam-like texture and a mild flavor, but mostly I taste the copious amounts of butter and garlic that goes into it. Certainly not unpleasant like you might expect.

I tried them once at a nicer restaurant and actually kinda liked them way more than I thought I would. They mostly just get loaded up with butter, though.