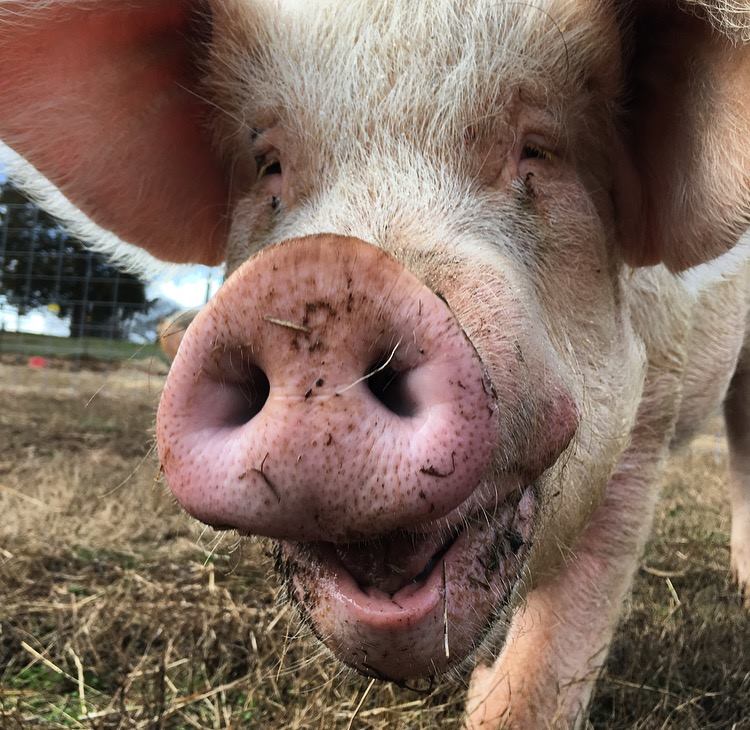 Ellie Laks had a dream at just seven years old to help animals, and that dream came true when she reached her early 20’s and founded The Gentle Barn. She loved animals and children so much that she decided to make it her bread and butter.

Although Ellie was a lover of animals, she never expected to have a mystery on her hands after the adoption of two rescue piglets.

Let’s backtrack a little, The Gentle Barn was known for taking in and helping rescue animals. That is why, when these two little piglets were brought through their doors, the team was ready to help.

Starting off as two very neglected piglets who were skinny and malnourished, Ellie took them under her wing and set them on their road to recovery. But this is when she started noticing that things were a little odd with piglets, Horton and Henry.

Let’s fast forward a little bit into their recovery. After having being treated for their rather rough state when they were piglets, Horton and Henry found their feet and started enjoying their life at the Gentle Barn.

However, we did notice that Henry developed a bit of an aggressive side. Henry often got into fights with other animals. However, Horton was always exempt from the outbursts of Henry’s vile behavior. Which astonished Ellie.

Ellie found this behavior very peculiar as Horton and Henry should be fighting with one another to assert dominance of some sort. However, all of the scraps Henry was getting into was with the other animals.

Yet, aggression is a trait that can be found in pubescent pigs. So, despite these surges of aggression, Ellie continued the recovery process with the two pigs. Until things seemed to get too weird to ignore.

This Not So Little Piggy

After taking care of and rearing these piglets since they were dropped on her doorstep, Ellie thought that she had seen it all in terms of animal behaviorism and what to expect from recovery animal patients.

But she did not expect for these pigs to get so strong and so big, so quickly. In fact, she was quite surprised at the alarming size that Horton had reached.

Considering the sheer size of both of these pigs, it was even easier for Henry to swing his weight around when he got into a tussle with the other animals. We had all noticed that Horton was getting increasingly lazy, but that is what pigs do.

Pigs are known for their messy and lazy nature. But quite contrastingly, Henry never seemed to slow down, with his energy and menacing attitude, this pig strutted around like he owned the place. Until one day, the workers noticed something odd about Horton.

The staff at Gentle Barn had noticed that Horton was struggling to walk after the two pigs were about a year old. The problem was that his legs were struggling to support his massive weight.

Apparently, this issue has become quite common among unnaturally large pigs that are raised for food. Laks mentions that “Horton’s size coupled with his bad conformation turned into mobility issues.” It was time to get Horton some help, and quick!

Horton had surgery and was put on anti-inflammatory medicine to help his condition. While he now feels better, he still spends most of his days on “bed rest”. His condition seems to be bettering every day but for now, he is enjoying the sun and his safe environment, with limited mobility.

His time playing outside with Henry is unfortunately limited too. But that’s when they noticed something about Henry, too.

One day after cleaning the barn out, one of the workers called Ellie to see what Henry was doing. Ellie was sure she had heard it all when it had come to the boisterous nature of this pig. But what she saw made her jaw drop.

Henry was stealing food from the other animals and going off to hide it somewhere before coming back for more. It was quite amusing to see. But they had to find out what was going on.

After Henry picked up his last mouth full of food, he started retreating to go and hide it. Ellie followed shortly behind him. She had no idea what this pig could be getting up to without his accomplice brother to keep him out of mischief.

When Ellie discovered what was going on, it absolutely melted her heart.

Although Horton was weak in terms of his mobility, the bond between these two brothers was still very strong. According to the volunteers at Gentle Barn, they had seen Henry periodically check on his brother throughout the day and make sure that he is okay, before going about his business.

Not Everything is What it Seems

“When we bring out hay for them to eat at lunchtime, Henry will grab a mouthful and bring it right into the barn for Horton,” Laks said. “He is very nurturing to him — to the point where he won’t let any other pigs near him.

He knows that Horton is delicate and vulnerable.” But he does more than just bring him food, often serving his brother before he eats the hay himself. So, what’s the Pig Surprise?

What a Pig Surprise

While Henry takes time out to hang out with the cows and horses, he never forgets that his brother is just a quick jog away, and he always makes sure that he has enough to eat and that he’s comfortable. Is this unusual for pigs?

A Squeak And A Squeal

According to Laks, this kind of sweet behavior is actually common for pigs. As highly emotional animals, they thrive on social interactions with others — and form deep bonds with family, friends and human caretakers.

“Pigs have a highly developed language,” Laks said. “They’re always communicating through their different snorts or grunts. Henry especially loves people, too. He’s always up for a belly rub and some veggies.” But let’s be honest — who isn’t?

It All Makes Sense Now

Before Horton’s surgery, Henry knew that there was something wrong. In saying so, he became aggressive and protective. More so, he wasn’t stealing the food to be a naughty pig. In fact, he was just looking after his brother.

We are happy to report that both pigs are being well looked after at Gentle Barn and that owner Ellie Laks has just written her own book titled, “My Gentle Barn: Creating a Sanctuary Where Animals Heal and Children Learn to Hope.”